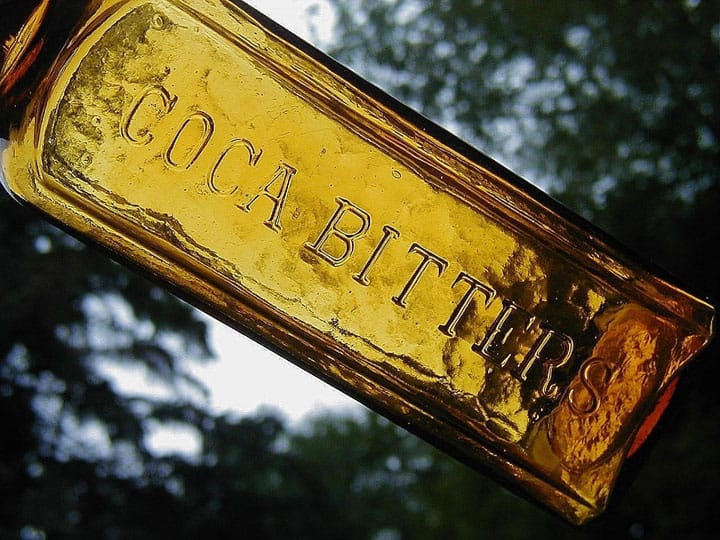 As with many posts where I look back at my collection, I get asked a question about a specific bottle. In this case the question pertains to the mysterious Coca Bitters that was recently dug in the coastal town of Duxbury, Massachusetts (see pictures below). 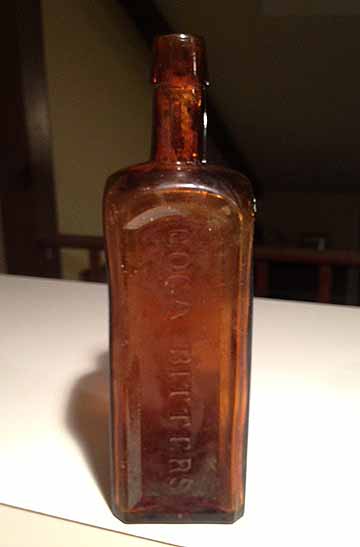 Hello Ferdinand, I just discovered the web site while searching for info on a bottle I dug up today (picture above) in Duxbury, Ma. It is the identical (to the) one shown on the site that was referred to as rare and was found in Hamden, Conn. in July 1973. Is this is so, then the Coca Bitters bottle I found is a big deal? – Chris

I say mystery because I know nothing about this bottle except that I like the name and it sits on a shelf somewhere, waiting for someone to ‘rediscover’ the story of the brand. The Carlyn Ring and W.C. Ham description in Bitters Bottles is as follows: 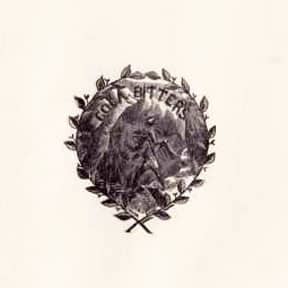 They have named it COCA BITTERS, but hope the name will not cause it to be classed with the so-called “Bitters”, which have done so much harm – physical and moral. 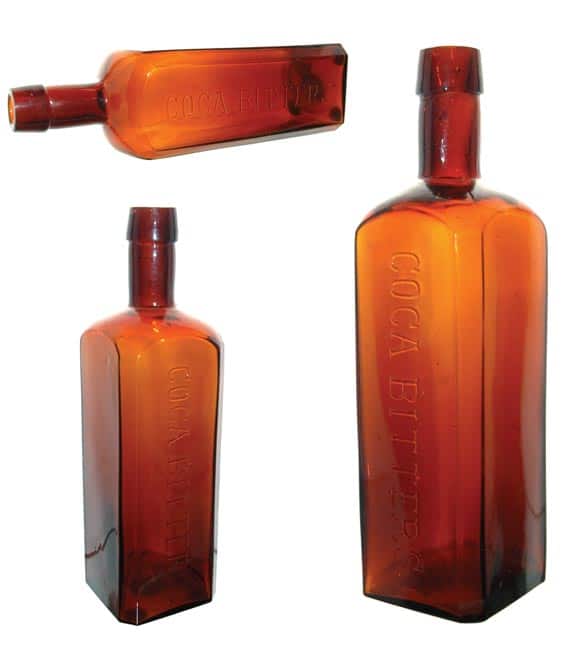 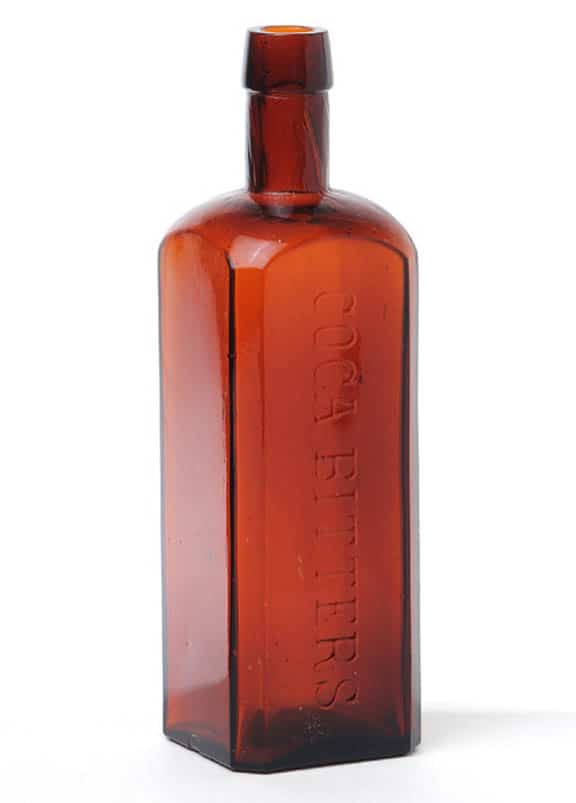 “COCA BITTERS”, America, 1880 – 1890. Amber with a slight orange tone, square with beveled corners, applied sloping collar – smooth base, ht. 8 3/8″, virtually attic mint; (a minor, paper-thin ¼” open bubble at edge of base, otherwise perfect). R/H #C178. Extremely rare. Note; there are at least two distinct mold variations of this bottle, as well as colors ranging from this orange-amber to a yellowish tone. All are considered rare and difficult to acquire. Put out by the Quichua Coca Co. of NYC. – American Glass Gallery – Auction #21

With little information to go on I can quickly search the net and find a few references to a Coca Bitters made by The Quichua Coca Co. in New York City. I love the copy in the advertisement below that says “They have named it COCA BITTERS, but hope the name will not cause it to be “classed with the so-called ‘Bitters’, which have done so much harm – physical and moral”. WOW. Use the coca leaf instead of alcohol and rise above!

[Update] I also see, (with the eyes of Warren Friedrich) that this new dug example is different than the example I possess. It looks earlier with indented panel(s) and smaller embossed typography. Is the mouth also applied. I only received one picture. I will ask for more. Stay tuned.

From the official report of Lieut- Herndon, U.S.N.: “The Peruvian natives who use Coca, perform prodigies of labor without fatigue. A powerful tonic for the nervous system, but not injurious to the health” 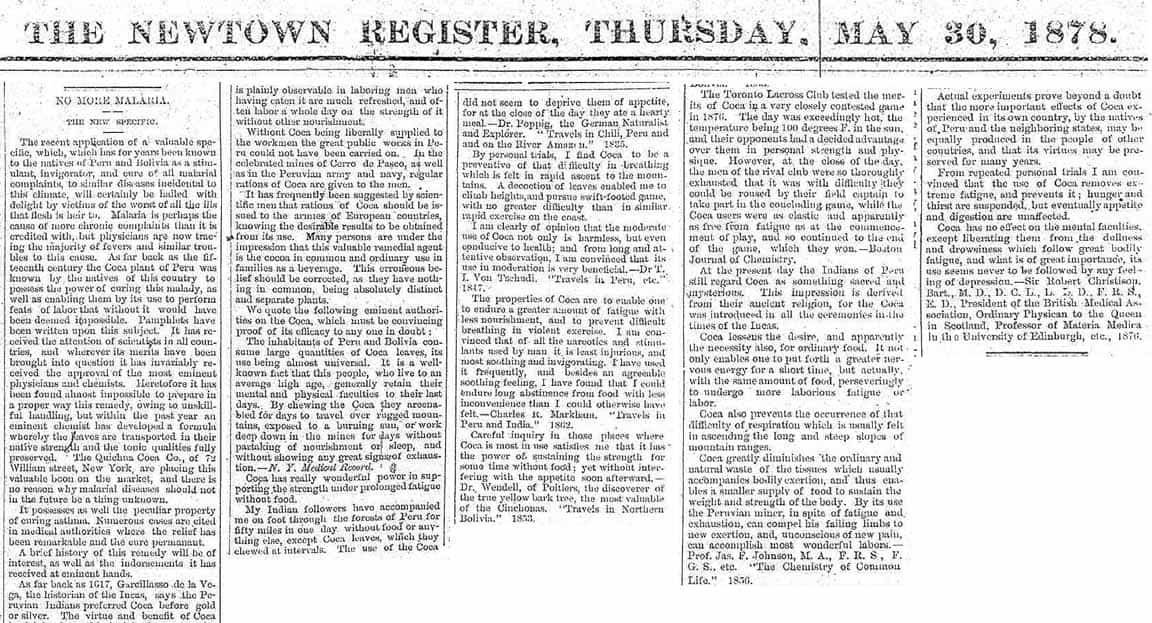 Article from The Newtown Register, Thursday, May 30, 1878 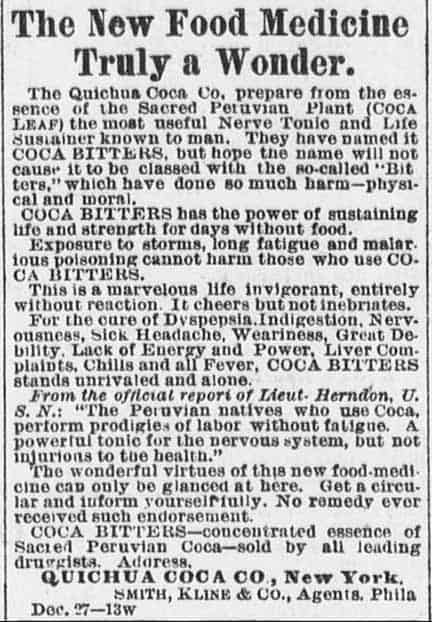 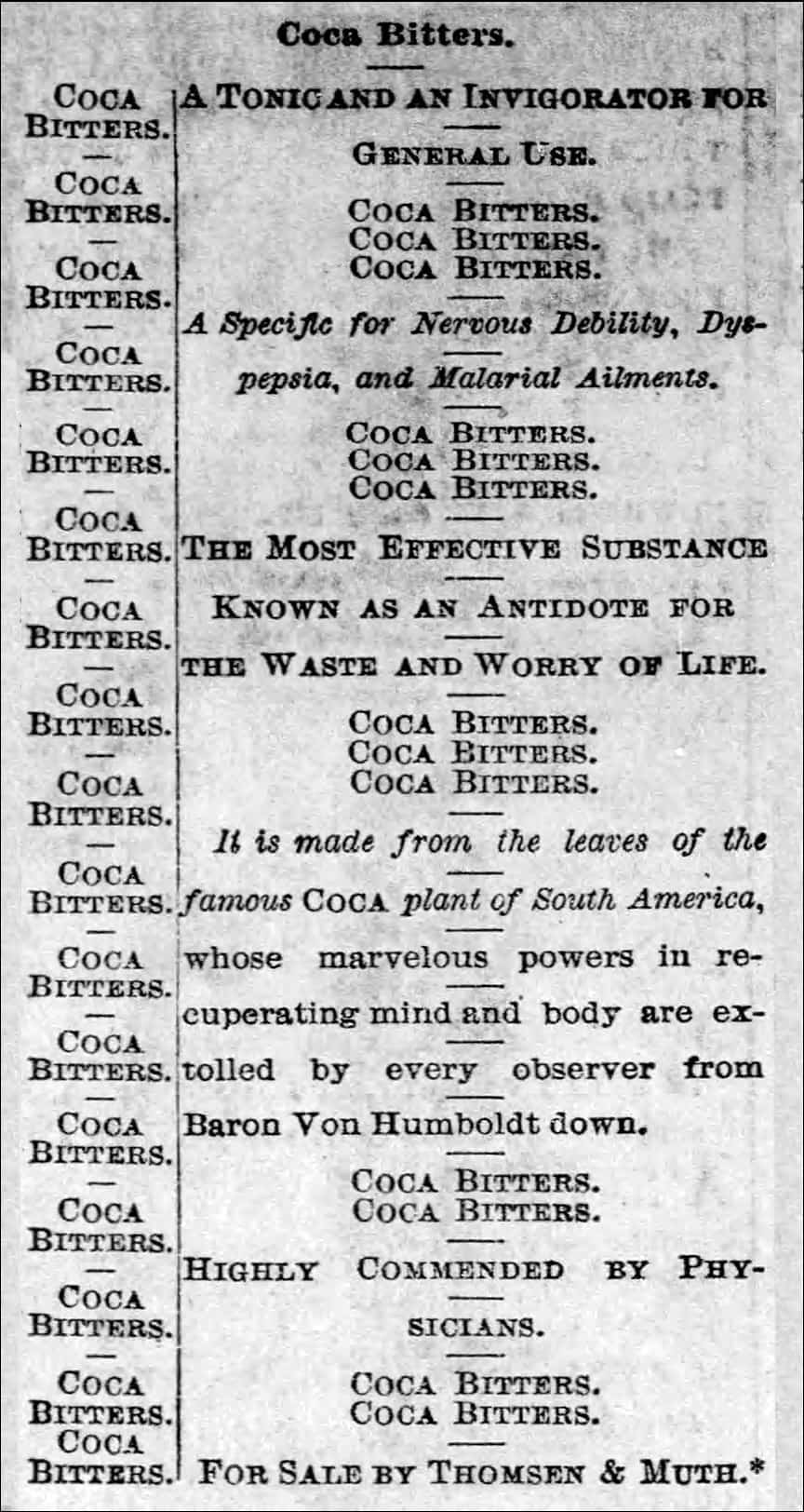 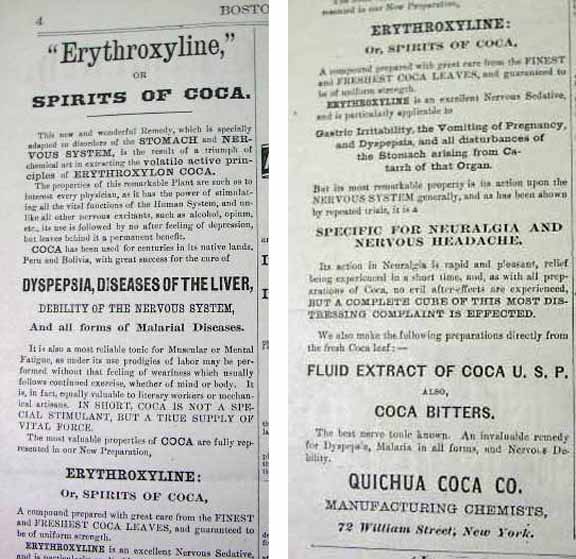 1880 Coca Bitters advertisement (see copy below). It appeared over 140 years ago in an issue of a rare weekly publication, The Boston Journal of Science – ebay

This new and wonderful Remedy, which is specially adapted to disorders of the STOMACH and NERVOUS SYSTEM, is the result of a triumph of chemical art in extracting the volatile active principles of ERYTHROXYLINE COCA.

The properties of this remarkable Plant are such as to interest every physician, as it has the power of stimulating all the vital functions of the Human System, and unlike all other nervous excitants, such as alcohol, opium, etc., its use is followed by no after feeling of depression, but leaves behind it a permanent benefit.

COCA has been used for centuries in its native lands, Peru and Bolivia, with great success for the cure of

DYSPEPSIA, DISEASES OF THE LIVER,

DEBILITY OF THE NERVOUS SYSTEM, And all forms of Malarial Diseases.

It is also a most reliable tonic for Muscular or Mental Fatigue, as under its use prodigies of labor may be performed without that feeling of weariness which usually follows continued exercise, whether of mind or body. It is, in fact, equally valuable to literary workers or mechanical artisans. IN SHORT, COCA IS NOT A SPECIAL STIMULANT, BUT A TRUE SUPPLY OF VITAL FORCE.

The most valuable properties of COCA are fully represented in our New Preparation,

ERYTHROXYLINE: Or, SPIRITS OF COCA,

A compound prepared with great care from the FINEST and FRESHEST COCA LEAVES, and guaranteed to be of uniform strength. ERYTHROXYLINE is an excellent Nervous Sedative, and is particularly applicable to Gastric Irritability, the Vomiting of Pregnancy,and Dyspepsia, and all disturbances of the Stomach arising from Catarrh of that Organ.

But its most remarkable property is its action upon the NERVOUS SYSTEM generally, and as has been shown by repeated trials, it is a

SPECIFIC FOR NEURALGIA AND NERVOUS HEADACHE.

Its action in Neuralgia is rapid and pleasant, relief being experienced in a short time, and, as with all preparations of Coca, no evil after-effects are experienced, BUT A COMPLETE CURE OF THIS MOST DISTRESSING COMPLAINT IS EFFECTED.

We also make the following preparations directly from the fresh Coca leaf:—

The best nerve tonic known. An invaluable remedy for Dyspepsia, Malaria in all forms, and Nervous Debility.

Read More: If you wanna hang out you’ve got to take her out – Cocaine

Read More: To Smoke Opium is to get out of the Train (while it is still moving) 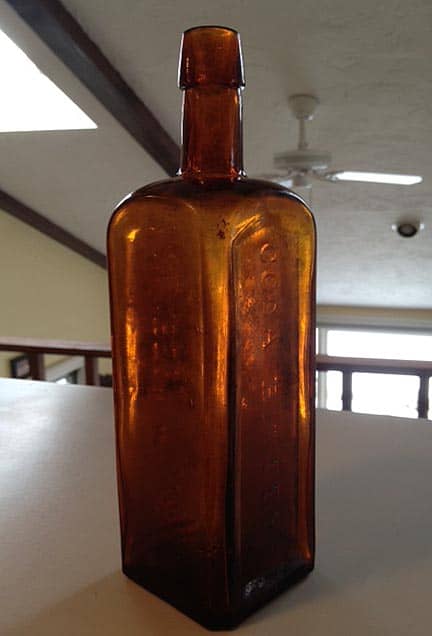 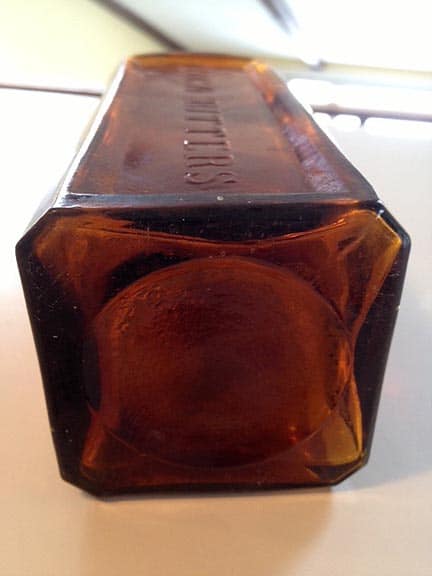 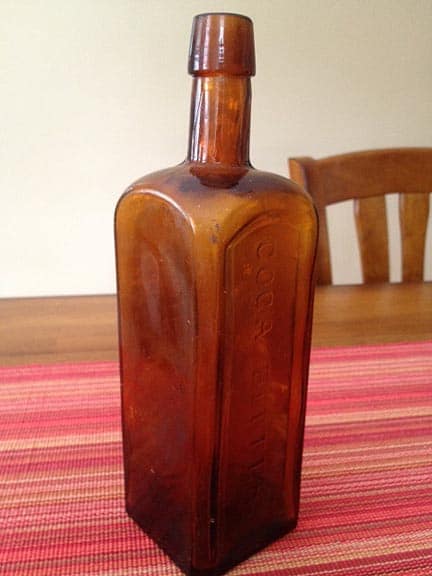 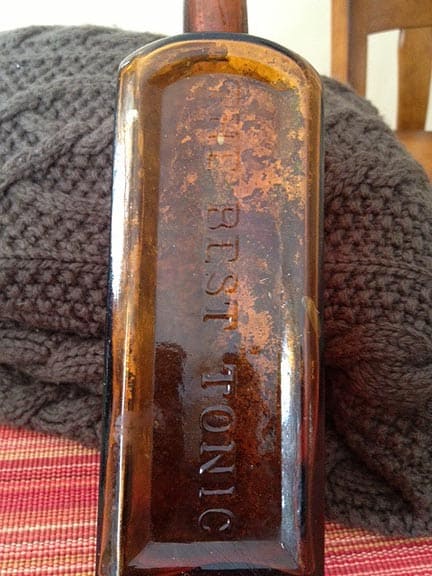 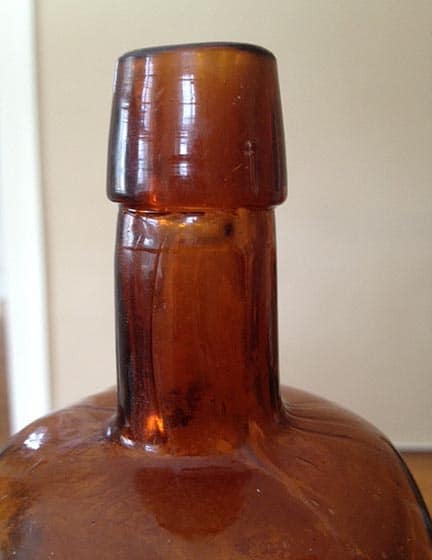 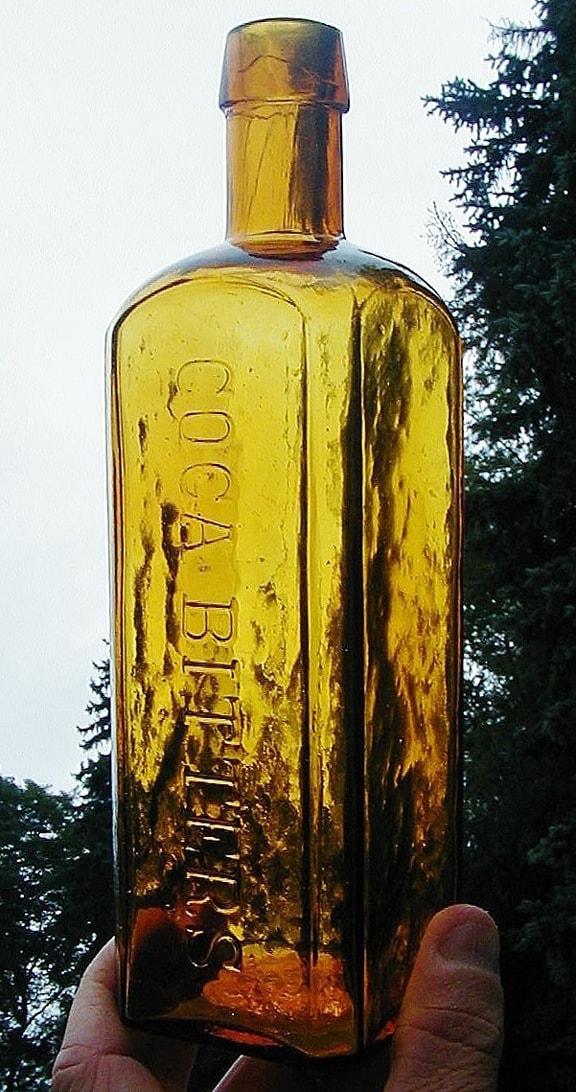 Ferdinand Meyer V is a native of Baltimore, Maryland and has a BFA in Fine Art and Graphic Design from the Kansas City Art Institute and School of Design. Ferdinand is the founding Principal of FMG Design, a nationally recognized design consultation firm. Ferdinand is a passionate collector of American historical glass specializing in bitters bottles, color runs and related classic figural bottles. He is married to Elizabeth Jane Meyer and lives in Houston, Texas with their daughter and three wonderful grandchildren. The Meyers are also very involved in Quarter Horses, antiques and early United States postage stamps. Ferdinand is the past 6-year President of the Federation of Historical Bottle Collectors and is one of the founding members of the FOHBC Virtual Museum.
View all posts by Ferdinand Meyer V →
This entry was posted in Bitters, Digging and Finding, Questions and tagged bitters, Coca, Connecticut, Duxbury, Erythroxyline, Ferdinand, Gourd, Hamden, Massachusetts, Meyer, New York, Peru, Peruvian, Quichua Coca Co.. Bookmark the permalink.