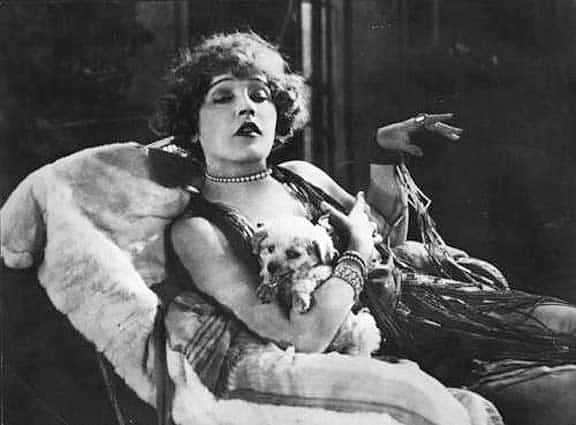 “In the City Market is the Meet Café. Followers of obsolete, unthinkable trades doodling in Etruscan, addicts of drugs not yet synthesized, pushers of souped-up harmine, junk reduced to pure habit offering precarious vegetable serenity, liquids to induce Latah, Tithonian longevity serums, black marketeers of World War III, excusers of telepathic sensitivity, osteopaths of the spirit, investigators of infractions denounced by bland paranoid chess players, servers of fragmentary warrants taken down in hebephrenic shorthand charging unspeakable mutilations of the spirit, bureaucrats of spectral departments, officials of unconstituted police states, a Lesbian dwarf who has perfected operation Bang-utot, the lung erection that strangles a sleeping enemy, sellers of orgone tanks and relaxing machines, brokers of exquisite dreams and memories tested on the sensitized cells of junk sickness and bartered for raw materials of the will, doctors skilled in the treatment of diseases dormant in the black dust of ruined cities, gathering virulence in the white blood of eyeless worms feeling slowly to the surface and the human host, maladies of the ocean floor and the stratosphere, maladies of the laboratory and atomic war… A place where the unknown past and the emergent future meet in a vibrating soundless hum… Larval entities waiting for a Live One…” 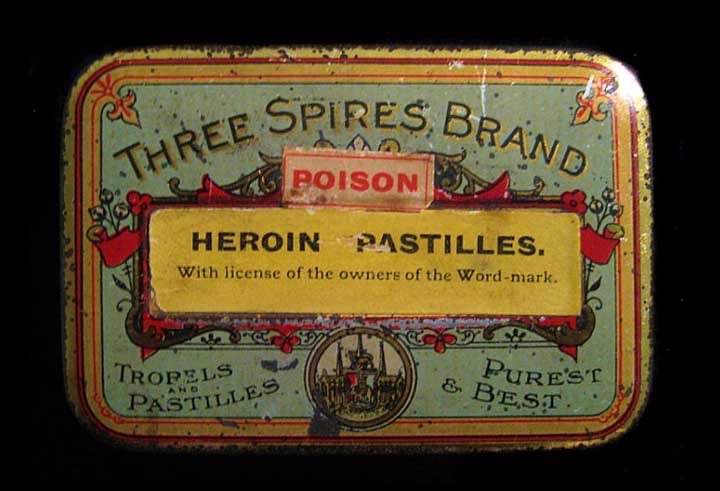 Last September we did a post on Cocaine (Read: If you wanna hang out you’ve got to take her out – Cocaine) and focused on how it ended up in many of the household medicinal and commercial products from times past.

Today we look at Heroin or Big H, the dragon, white horse, Chiva, smack and on and on… 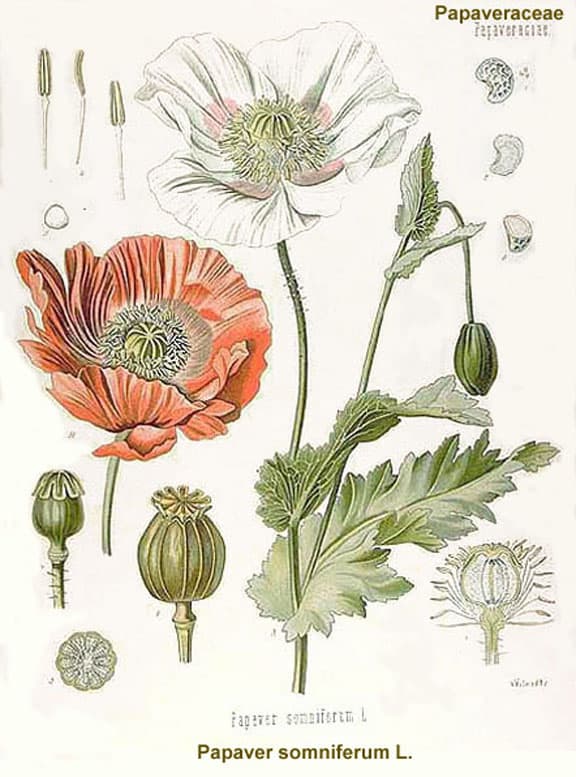 Opium poppy, Papaver somniferum, is the species of plant from which opium and poppy seeds are derived.

The opium poppy was cultivated in lower Mesopotamia as long ago as 3400 BC. The chemical analysis of opium in the 19th century revealed that most of its activity could be ascribed to two alkaloids, codeine and morphine. 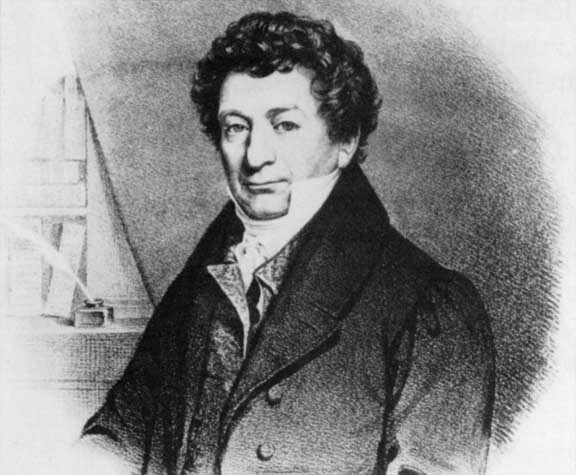 Friedrich Wilhelm Adam Sertürner (born 19 June 1783 in Neuhaus (near Paderborn), died 20 February 1841 in Hamelin) was a German pharmacist, who discovered morphine in 1806.

In 1806 the German chemist Friedrich Wilhelm Adam Sertürner isolated morphine from opium, a milky substance found in unripe seedpots of the poppy plant. Morphine is one of the strongest naturally occurring painkillers and of great importance where other analgesics fail. Side effects include depressiveness, drowsiness and a slowing down of breathing and circulation.

The attempt to find a non-addictive replacement for Morphine led to the development of heroin, a morphine derivative, by the German chemical company Bayer in 1898. 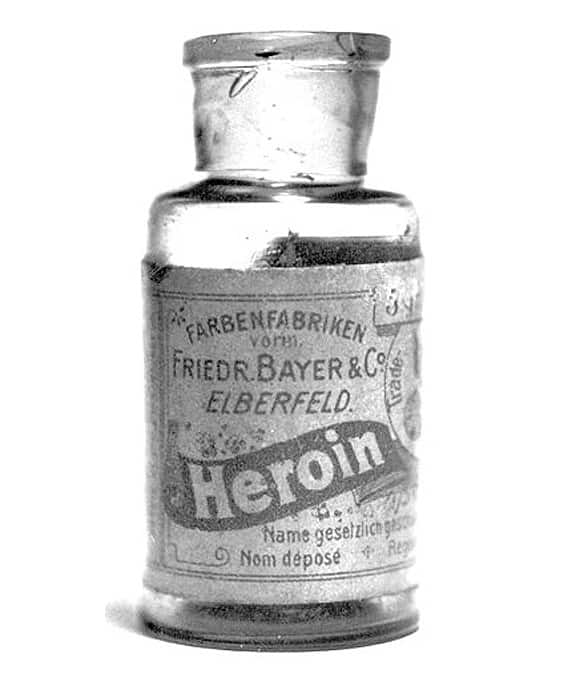 The attempt to find a non-addictive replacement for Morphine led to the development of heroin, a morphine derivative, by the German chemical company Bayer in 1898. The pain-controlling and analgesic properties of heroin are much more effective than those of morphine, and for over two decades the use of heroin was promoted to the general public against headache and other minor pain. 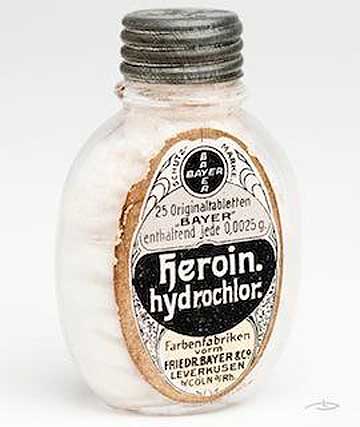 The name “heroin” is only used when being discussed in its illegal form. When it is used in a medical environment, it is referred to as diamorphine. The white crystalline form considered “pure heroin” is usually the hydrochloride salt, diacetylmorphine hydrochloride. Diacetylmorphine was first synthesized in 1874 by C. R. Alder Wright, an English chemist working at St. Mary’s Hospital Medical School in London. He had been experimenting with combining morphine with various acids. He boiled anhydrous morphine alkaloid with acetic anhydride for several hours and produced a more potent, acetylated form of morphine, now called diacetylmorphine or morphine diacetate.

Instead, the experiment produced an acetylated form of morphine one and a half to two times more potent than morphine itself.

Later diacetylmorphine became popular only after it was independently re-synthesized 23 years later by another chemist, Felix Hoffmann. Hoffmann, working at the Aktiengesellschaft Farbenfabriken (today the Bayer Pharmaceutical Company) in Elberfeld, Germany, was instructed by his supervisor Heinrich Dreser to acetylate morphine with the objective of producing codeine, a constituent of the opium poppy, pharmacologically similar to morphine but less potent and less addictive. Instead, the experiment produced an acetylated form of morphine one and a half to two times more potent than morphine itself. 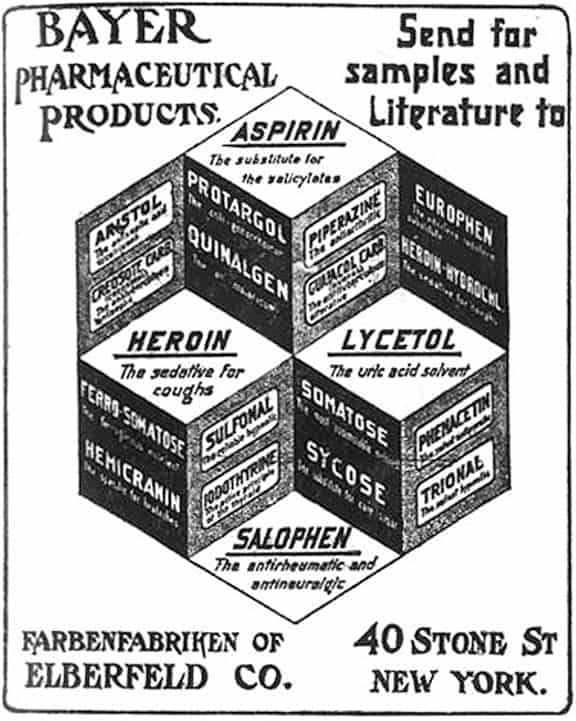 An advertisement for Heroin as cough medicine

From 1898 through to 1910, diacetylmorphine was marketed under the trademark name Heroin as a non-addictive morphine substitute and cough suppressant. Bayer marketed the drug as a cure for morphine addiction before it was discovered that it rapidly metabolizes into morphine. As such, diacetylmorphine is in essence a quicker-acting form of morphine. The company was embarrassed by the new finding, which became a historic blunder for Bayer. 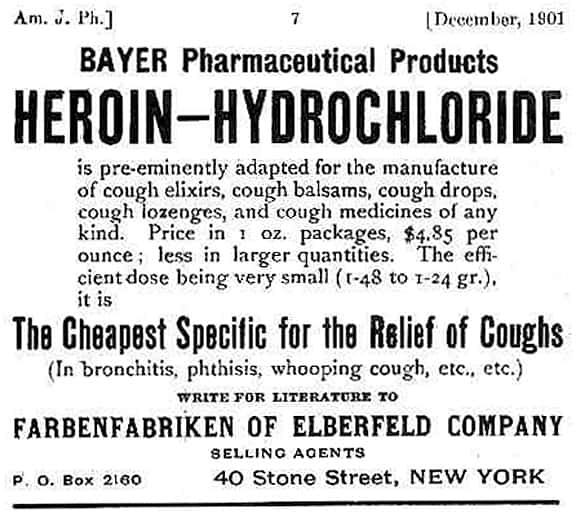 The company was embarrassed by the new finding, which became a historic blunder for Bayer. 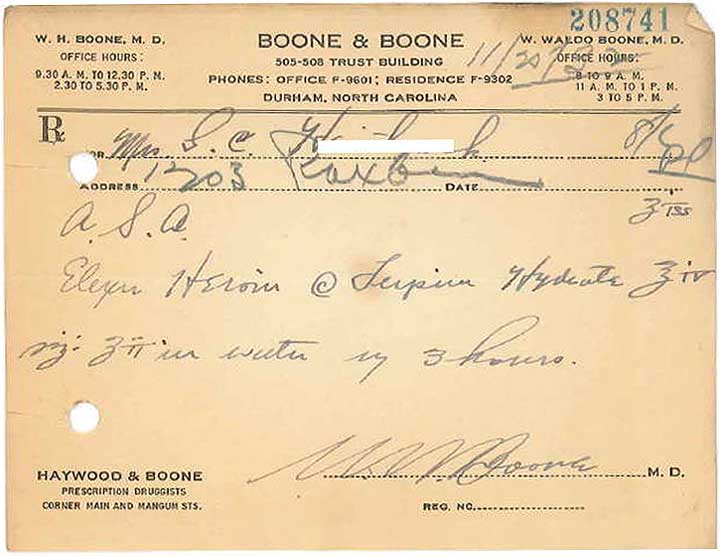 In the United States, the Harrison Narcotics Tax Act was passed in 1914 to control the sale and distribution of diacetylmorphine and other opioids, which allowed the drug to be prescribed and sold for medical purposes. In 1924, the United States Congress banned its sale, importation or manufacture. It is now a Schedule I substance, which makes it illegal for non-medical use in signatory nations of the Single Convention on Narcotic Drugs treaty, including the United States. 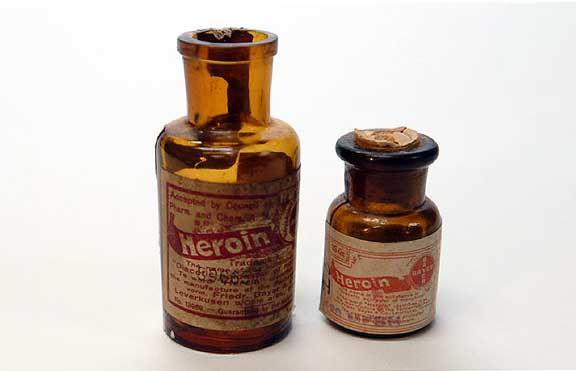 The Health Committee of the League of Nations banned diacetylmorphine in 1925, although it took more than three years for this to be implemented. In the meantime, the first designer drugs, viz. 3,6 diesters and 6 monoesters of morphine and acetylated analogues of closely related drugs like hydromorphone and dihydromorphine were produced in massive quantities to fill the worldwide demand for diacetylmorphine—this continued until 1930 when the Committee banned diacetylmorphine analogues with no therapeutic advantage over drugs already in use, the first major legislation of this type.
Later, as with Aspirin, Bayer lost some of its trademark rights to heroin under the 1919 Treaty of Versailles following the German defeat in World War I. [source reference Wikipedia] 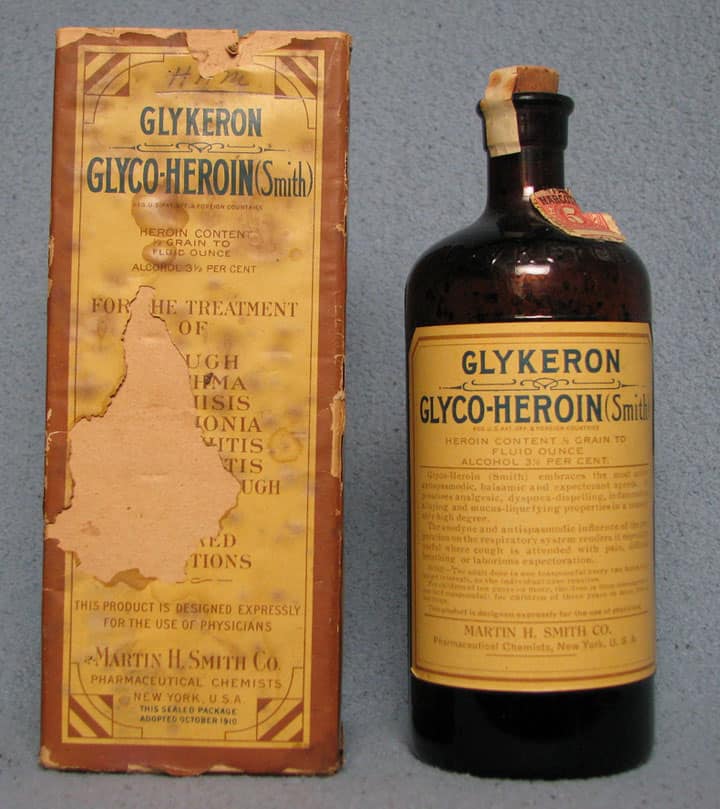 Glyco-Heroin Bottle with Label and Box 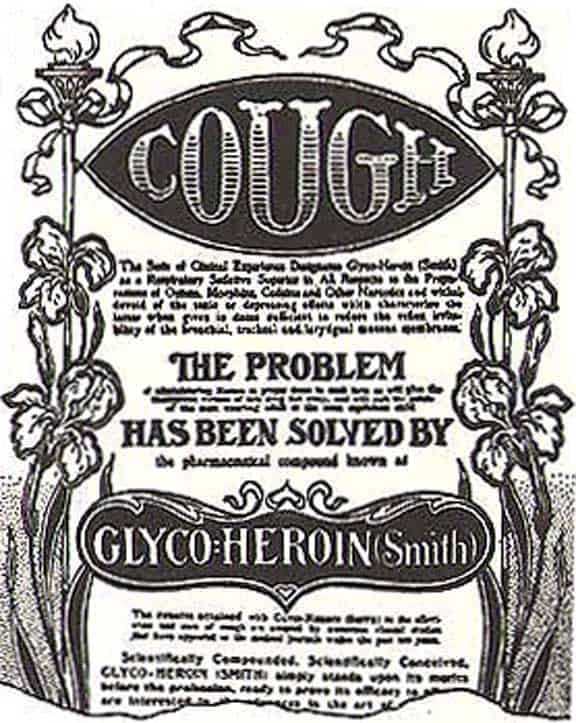 GLYCO:HEROIN (Smith) – A mixture of heroin and glycerin. “No other preparation has had its therapeutic value more thoroughly defined or better established.” 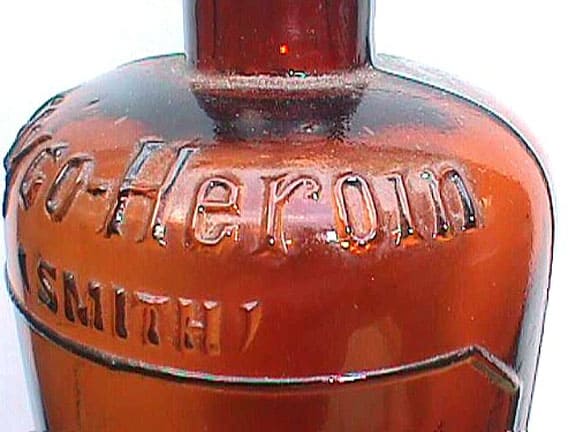 As time went on in the early 1900’s, the Pure Food and Drug Administration started to regulate the patent medicine industry against the use of narcotics and cure claims. As a result companies made revisions to their products and even this product changed its name from Glyco Heroin to Glykeron. It still contained the Heroin but evidently Glykeron sounded more medicinally correct. Not a commonly seen bottle, actually rarer than the Glyco Heroin bottle – ebay

Ferdinand Meyer V is a native of Baltimore, Maryland and has a BFA in Fine Art and Graphic Design from the Kansas City Art Institute and School of Design. Ferdinand is the founding Principal of FMG Design, a nationally recognized design consultation firm. Ferdinand is a passionate collector of American historical glass specializing in bitters bottles, color runs and related classic figural bottles. He is married to Elizabeth Jane Meyer and lives in Houston, Texas with their daughter and three wonderful grandchildren. The Meyers are also very involved in Quarter Horses, antiques and early United States postage stamps. Ferdinand is the past 6-year President of the Federation of Historical Bottle Collectors and is one of the founding members of the FOHBC Virtual Museum.
View all posts by Ferdinand Meyer V →
This entry was posted in Advertising, Druggist & Drugstore, History, Medicines & Cures and tagged Bayer, C. R. Alder Wright, codeine, diacetylmorphine, diamorphine, Elberfeld, Felix Hoffmann, Friedrich Wilhelm Adam Sertürner, German, Glyco-Heroin, Harrison Narcotics Tax Act, Heroin, Mesopotamia, Morphine, opium, poppy, William S. Burroughs. Bookmark the permalink.