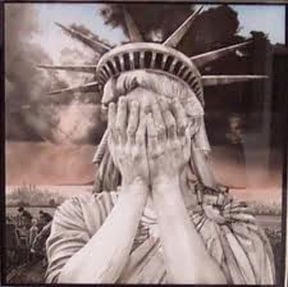 I hope you are doing well, but there is an urgent and quite frightening matter that I need to discuss with you. There was a post back before the Expo that pertained to laws being passed affecting bottle collectors, in California I believe. It was headed by a picture of the Statue of Liberty (PRG: see picture above), but I have not been able to find it. I commented that we need a lobbyist group to monitor both Federal and individual state legislation introduced that might negatively affect not only collectors of bottles but any antiquity. You replied that you agreed and hoped to bring it up at the Federation board meeting in Reno. I haven’t seen anything on this and would love to hear if you made in progress on the matter.

My reason for writing you is to make you is to make you aware of anti-collector movements that are going on in our nation. I’m pasting a few comments that I have made recently in the wake of a sting operation in Florida against Indian artifact collectors. My words are the italicized portion of an email that is being circulated by the administrator of artifactsguide.com.

If you are receiving this email, I am asking for your thoughts and input for much needed idea, passed along to me from a fellow arrowhead collector, and I think is right on the money and WAY past due.

Here’s an excerpt from an email from this collector:

“ALL collectors need a national lobbyist group like the NRA to monitor legislation introduced at both federal and state levels, and to fight it fluently and professionally before it’s ever reaches even a committee vote, much less the governor’s desk. I went to Atlanta too, along with probably less than a dozen guys total. A dozen won’t get it. Nor will a hundred. Or two hundred. Whether it’s going to Atlanta, Tallahassee or Montgomery. Or signing petitions (I collected hundreds of signatures). Or making calls or writing letters to representatives. It just will not do it. To the pompous, ivory tower legislators, we are just a bunch of know-nothing rednecks good for nothing but paying taxes for them to squander. Right now, our asses are in the worst kind of crack.

We need the strength of thousands and thousands of members in order to scare these legislators where it hurts – in the voting booth. But first there must be a mass notification of collectors of anything old that should scare the hell out of them. Make them aware of what happened last week and that it may be them next, and we’d have members in droves. We need lobbyists who know how to talk to these lawmakers making them aware that he or she is backed by hundreds of thousands of collectors whom can be mobilized at a moment’s notice. And the only way to do that is to form a confederacy of not only Indian artifact collectors in GA/AL/FLA, but collectors nationwide of bottles, insulators, Civil War artifacts, signs, marbles, dolls, stoneware, furniture, art, primitives, basketry, tools, and on and on and, well you get the picture.

If we could band together even half of all collectors nationwide, I believe we would have a rights group eclipsing that of the NRA. There are organizations for collectors of virtually every antiquity out there, so there are your numbers/members right there. Take the TSAS, Central States, and so forth, combined with the FOHBC, and the NIA, etc., notify them in a persuasive, well-worded but chilling manner of the movement afoot in this nation against collectors and their members would join, because our predicament is just the start of an onslaught against collectors of any antiquity. And it will not stop with last week, or with Indian artifacts.

I know damn well there is somebody here who knows somebody that is a deep pocketed lawyer, doctor, or investor who COLLECTS, and that he is NOT IMMUNE! And that well-moneyed individual has to know other people to whom he can delegate the tasks needed to get this going. I know I’ve got the right idea here and can visualize it, but have no idea how to do it, I don’t have the money or rich associates, can’t speak without getting all tongue-tied and nervous, but surely somebody knows somebody who knows how to get this ball rolling. I’m ready to pay my dues, just need the organization to send them to. I know I can probably come up with the member rolls for the FOHBC and the NIA”

Here’s what I need from you – Would you be on board to help support, organize, network, and promote such an organization?

Would love to get your feedback and feel free to pass this along to anyone that might be a proponent of ACRA.

Here is another of my comments:

I feel like it’s the only way to preserve what rights we have left, and who knows, maybe eventually have some of the restrictive laws reversed. I realize it’s a huge undertaking, but of the utmost necessity.

I have a friend (bottle collector) who is retired after a full career with the GA DNR. He is a fine gentleman, and although not a game warden, he worked closely with them and described the majority of them as “jack-booted thugs”. That is a sad commentary on a section of our law enforcement who is indeed becoming like the dreaded Gestapo.

Many would probably tell you that they are only enforcing the law. But weren’t Nazi officers doing just that? What about King Herod’s soldiers? Weren’t they simply enforcing his mandate that all baby boys under the age of two be rounded up and executed? Where do our law officers draw the line? Simply because something is the law does not make it right. A law is nothing more than the opinion of a few forced upon the whole of the people.

As history has illustrated time and again, tyranny comes in baby steps. No pun intended. 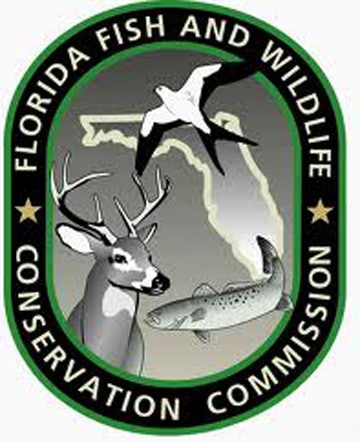 I know many of these individuals and they are not the villains that the state portrays them to be. They are not crackheads and grave-robbers. As anyone with any common sense can derive, nothing in our nation’s waterways is in the same place it was last week, much less 7000 years ago. But Florida (and Georgia) have convinced lawmakers that everything older than 50 years (like a Christmas Coke) in rivers is in its original context, and is the property of the State. Are you beginning to be alarmed? I sure as Hell hope so.

If not, can you picture this? 20 law enforcement officers show up at your door, place you and Elizabeth in cuffs. Seize your cell phones, computers, and ALL of your bottles as evidence, charge you with a felony, because at a show you sold a bottle that was known to have been recovered from a river that had been designated as off-limits to anyone not a certified archaeologist by the State in which it was found. Sound far-fetched? Check this out: From the Ice Cold Waters of Maine Or this: Yes, an aqua GALLON Harrisons Columbian Ink! 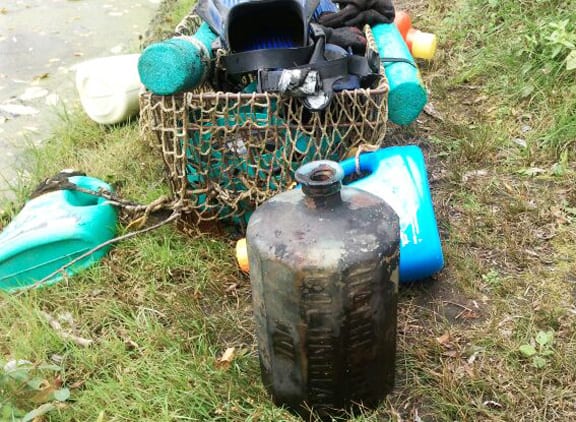 Or let’s say the State or the Fed decides that anything out of the ground is considered a “cultural resource” and must be left alone. If I’m not mistaken, a couple of states have even banned recovery of anything over 50 years old from private property with permission, or even if you are the landowner! Read: Rosenbaum Heaven 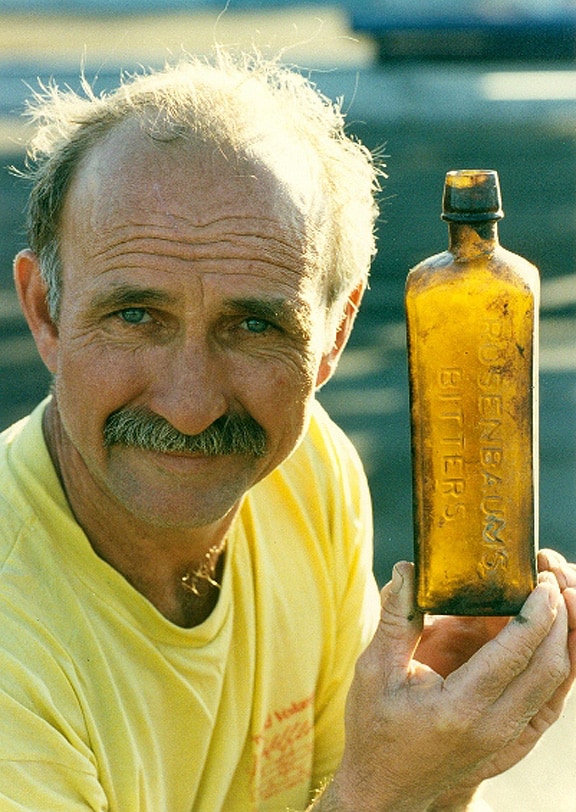 See? What we enjoy as sharing our finds or purchases with like-minded collectors online, serves as evidence to the ones seeking to destroy the hobbies we love most. Here is another of my comments:

The day will come when cultural resource includes antique toys, porcelain signs, stoneware churns, you name it. And the fact that you breathe and have a pulse will constitute probable cause for search and seizure. No here. I’m dead serious.

All it takes is for them to define “cultural resource”. Or just say anything man made over 50 years of age:

Yeah, they’re gathering a head of steam now, and surrounding states look to their neighbors to see how the political winds are blowing and say “Gee, you know, we need to be protecting our cultural treasures, too…” and garbage like this will spread like a plague through this nation. What’s bad is that the small factions that push for legislation portray it in such a light that most of the lawmakers truly believe that they are doing the right thing, because collectors don’t have the lobbyists in place to monitor and fight such laws.

Ferd, I’ve come to really admire how you grab the bull by the horns and get things accomplished. Not just in bottle and Federation matters, but in your business as well. I see myself as a mini-Ferd. I too am a graphic designer and have been in business for 31 years now, but am a one man operation who has always seen myself expanding but never had the guts to step out there. I love the GREAT glass, and have a FEW extraordinary pieces, but the wallet has stayed small like my business. Well, that’s something for another day…but right now collectors all over this country are in imminent danger and many don’t even have a clue. They should be terrified and would be if they knew what I know, and were able to see the big picture, (or billboard that is about to topple on them at any time).

Is there anything you can do to help? Or do you know the right individual to get the ball rolling? I realize that it is no small undertaking with legal matters involved in the formation of such an organization, tax status, mailings, selecting and hiring of actual lobbyists, etc., but the time for such an organization is NOW!

Please, let me hear your thoughts on this matter. I realize my letter has been quite lengthy and for that, I apologize. If you would rather talk on the phone, feel free to call me at 478.952.6706. Thanks again for your time.

Ferdinand Meyer V is a native of Baltimore, Maryland and has a BFA in Fine Art and Graphic Design from the Kansas City Art Institute and School of Design. Ferdinand is the founding Principal of FMG Design, a nationally recognized design consultation firm. Ferdinand is a passionate collector of American historical glass specializing in bitters bottles, color runs and related classic figural bottles. He is married to Elizabeth Jane Meyer and lives in Houston, Texas with their daughter and three wonderful grandchildren. The Meyers are also very involved in Quarter Horses, antiques and early United States postage stamps. Ferdinand is the past 6-year President of the Federation of Historical Bottle Collectors and is one of the founding members of the FOHBC Virtual Museum.
View all posts by Ferdinand Meyer V →
This entry was posted in Advice, Bitters, Digging and Finding, FOHBC News, Inks, News, Regulations, Schnapps and tagged Collector, florida, fohbc, Jimmy Bray, Kevin Dowdy, Rights, Statue of Liberty. Bookmark the permalink.