Looking back at Deadwood, South Dakota 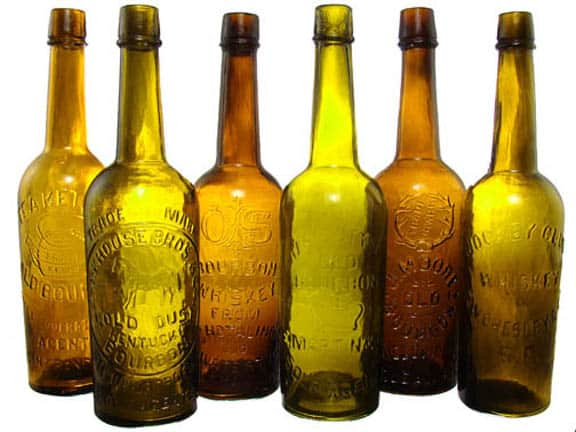 Usually, I do not get much time to watch television, but when Elizabeth and I do, we usually sit together on Sunday evenings and tune in on the latest HBO series. Award winning drama and documentaries are the norm, all without commercials. In the past this has included The Sopranos, Boardwalk Empire, Six Feet Under, Carnival, Game of Thrones, Treme, True Blood and Deadwood which was probably my favorite.

According to Wikipedia, Deadwood was an American western television series that was created, produced and largely written by David Milch and aired on the premium cable network HBO from March 21, 2004, to August 27, 2006. It spanned three 12-episode seasons. The show is set in the 1870s in Deadwood, South Dakota, before and after the area’s annexation by the Dakota Territory. 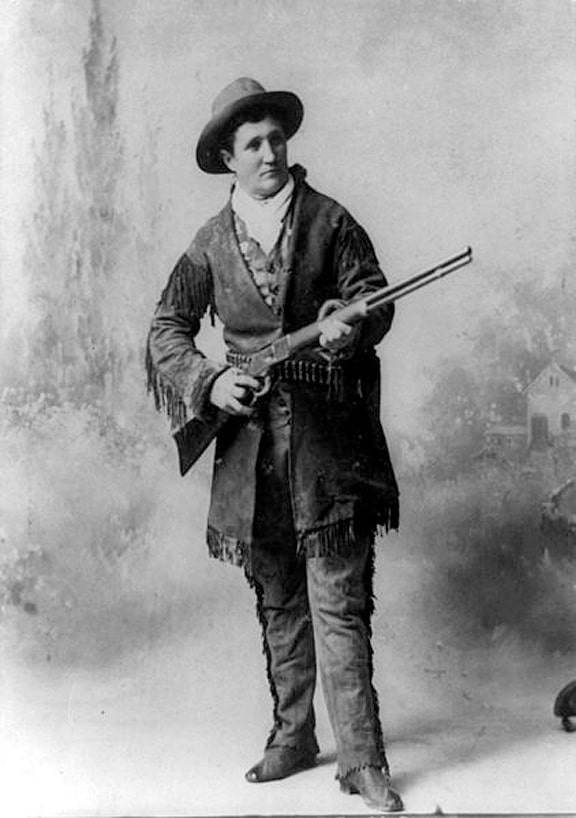 Martha Jane Canary (May 1, 1852 – August 1, 1903), better known as Calamity Jane, was an American frontierswoman, and professional scout best known for her claim of being an acquaintance of Wild Bill Hickok, but also for having gained fame fighting Indians. She is said to have also exhibited kindness and compassion, especially to the sick and needy. This contrast helped to make her a famous frontier figure.

The plot lines involving these characters include historical truths as well as substantial fictional elements. Milch used actual diaries and newspapers from 1870s Deadwood residents as reference points for characters, events, and the look and feel of the show. Some of the characters are fully fictional, although they may have been based on actual persons. 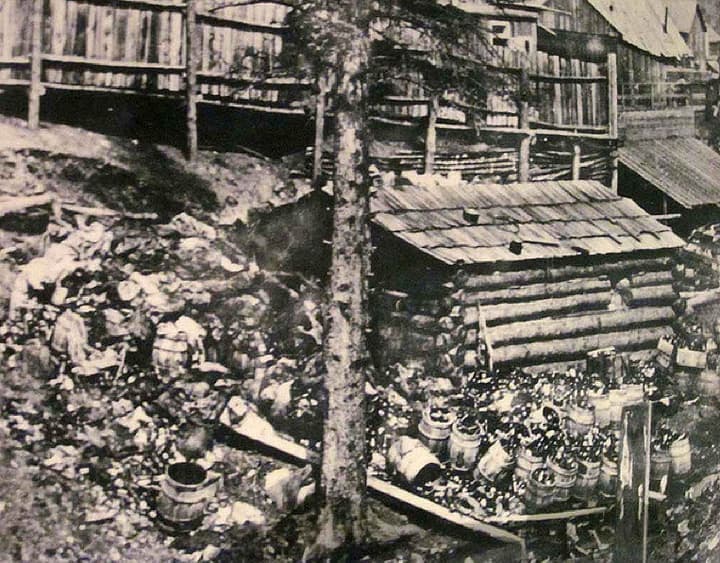 Rear of saloon in Deadwood. Notice the mountain of bottles. 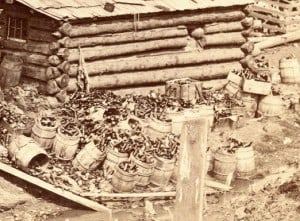 I stared thinking about Deadwood again when Jeff Wichmann posted that great saloon picture (left) with all of the discarded bottles.

I was able to find the native source picture (above) which is just plain raw with excitement and history. All that gold rush traveling, mining, harsh weather, whoring and gambling must have made for some frequent and substantial whiskey drinking in this God forbid and forsaken place in South Dakota.

It is named for the dead trees found in its gulch.

Deadwood is a city in South Dakota, United States, and the county seat of Lawrence County. It is named for the dead trees found in its gulch. The population was 1,270 according to the 2010 census. The city includes the Deadwood Historic District, a National Historic Landmark District, whose borders may be the city limits. [wikipedia] 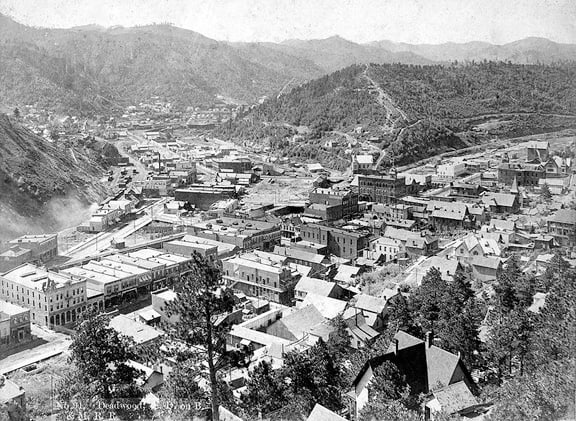 Custer’s announcement triggered the Black Hills Gold Rush and gave rise to the lawless town of Deadwood, which quickly reached a population of around 5,000. 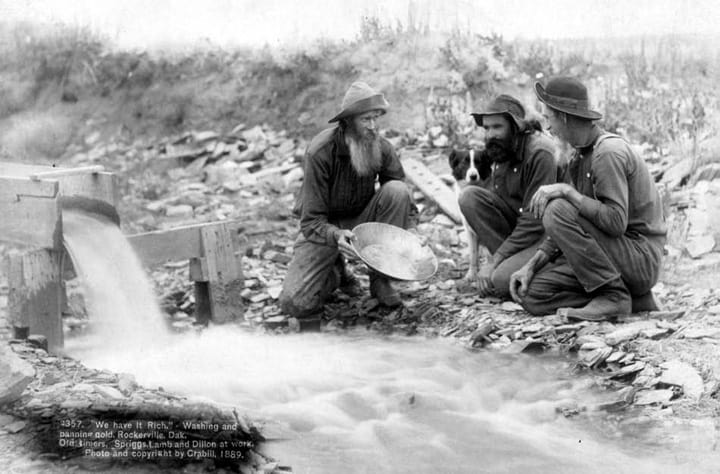 Three men pan for gold in the Dakotas in the late 1800’s. – Library of Congress

The illegal settlement of Deadwood began in the 1870s on the territory granted to American Indians in the 1868 Treaty of Laramie. The treaty had guaranteed ownership of the Black Hills to the Lakota people, and disputes over the Hills are ongoing, having reached the United States Supreme Court on several occasions. However, in 1874, Colonel George Armstrong Custer led an expedition into the Hills and announced the discovery of gold on French Creek near present-day Custer, South Dakota. Custer’s announcement triggered the Black Hills Gold Rush and gave rise to the lawless town of Deadwood, which quickly reached a population of around 5,000. 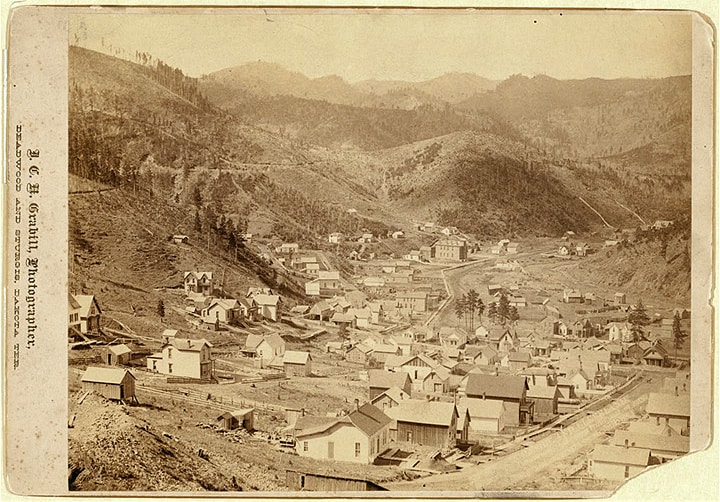 The wagon train brought gamblers and prostitutes, resulting in the establishment of profitable ventures. Demand for women was high, and the business of prostitution proved to have a good market.

In early 1876, frontiersman Charlie Utter and his brother Steve led a wagon train to Deadwood containing what were deemed to be needed commodities to bolster business. The wagon train brought gamblers and prostitutes, resulting in the establishment of profitable ventures. Demand for women was high, and the business of prostitution proved to have a good market. Madam Dora DuFran would eventually become the most profitable brothel owner in Deadwood, closely followed by Madam Mollie Johnson. Businessman Tom Miller opened the Bella Union Saloon in September of that year. 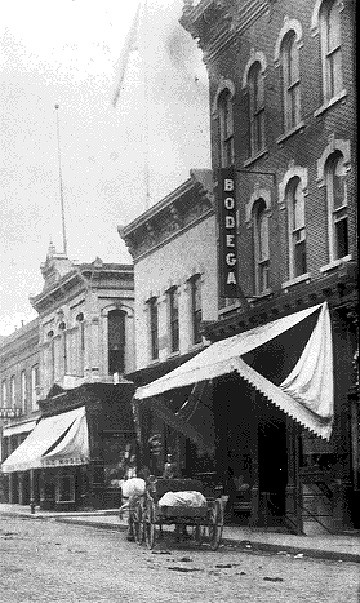 The Bodega Saloon has occupied the main floor of this building since at least 1893. Photo, 1880, photo courtesy Adams Museum. The oldest operating saloon in Deadwood is the Bodega Saloon at 664 Main Street. The building was first constructed as the offices of the Northwest Express, Stage & Transportation Company in 1880. However, in 1893, the Bodega Saloon was established by W.H. Carter. In 1899, Deadwood’s first “moving pictures” were shown here. In 1902, the saloon was remodeled and over the years, a variety of businesses were held in the basement and upper floors of the saloon, but the Bodega remained on the first floor.

Another saloon was the Gem Variety Theater, opened April 7, 1877 by Al Swearengen who also controlled the opium trade in the town. The saloon was destroyed by a fire and rebuilt in 1879. It burned down again in 1899, causing Swearengen to leave the town.

The town attained notoriety for the murder of Wild Bill Hickok, and Mount Moriah Cemetery remains the final resting place of Hickok and Calamity Jane, as well as slightly less notable figures such as Seth Bullock. 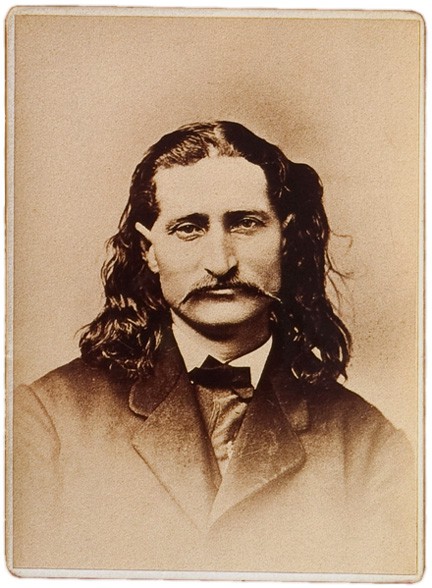 James Butler Hickok (May 27, 1837 – August 2, 1876), better known as Wild Bill Hickok, was a folk hero of the American Old West. His skills as a gunfighter and scout, along with his reputation as a lawman, provided the basis for his fame, although some of his reported exploits are fictionalized. Born and raised on a farm in rural Illinois, Hickok went west at age 18 as a fugitive from justice, first working as a stagecoach driver, before he became a lawman in the frontier territories of Kansas and Nebraska. He fought for the Union Army during the American Civil War, and gained publicity after the war as a scout, marksman, actor, and professional gambler. Between his law-enforcement duties and gambling, which easily overlapped, Hickok was involved in several notable shootouts. He was shot and killed while playing poker in the Nuttal & Mann’s Saloon in Deadwood, Dakota Territory (now South Dakota).

Deadwood became known for its wild and almost lawless reputation, during which time murder was common, and punishment for murders not always fair and impartial. Hickok’s murderer, Jack McCall, was prosecuted twice, despite the U.S. Constitution’s prohibition against double jeopardy, because of a ruling that Deadwood was an illegal town in Indian Territory and thus lacked the jurisdiction to prosecute or acquit McCall. This decision moved McCall’s trial to a Dakota Territory court (“Indian Court”), where he was found guilty of murder and hanged. 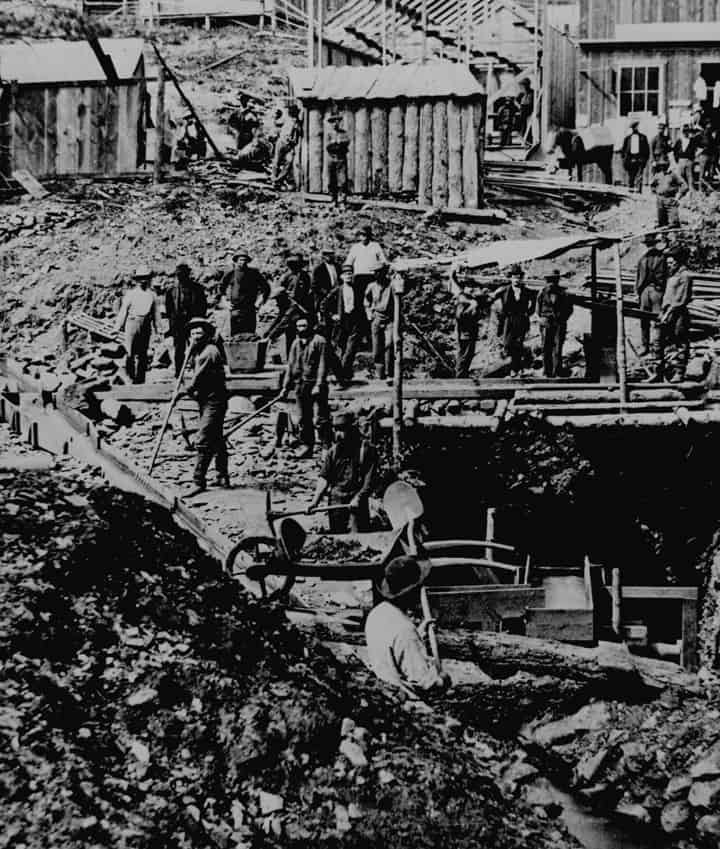 As the economy changed from gold rush to steady mining, Deadwood lost its rough and rowdy character and settled down into a prosperous town. In 1876, a smallpox epidemic swept through the camp with so many falling ill that tents were erected to quarantine the stricken. 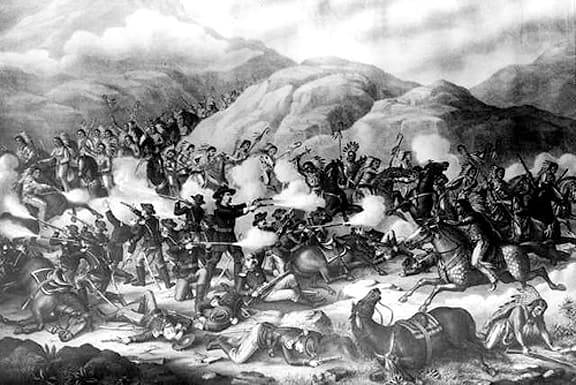 In 1876, General George Crook pursued the Sioux Indians from the Battle of Little Big Horn on an expedition that ended in Deadwood and is known as the Horsemeat March. Open cut in the great Homestake Mine, at Lead City, Dakota Territory.

The Homestake Mine in nearby Lead was established in 1877. For years, it was the longest continuously operating gold mine in the United States. It is now open to tourists.
On September 26, 1879, a fire devastated Deadwood, destroyed more than three hundred buildings, and consumed the belongings of many inhabitants. Many of the newly impoverished left town to start again elsewhere without the opportunities of rich untapped veins of ore that characterized the early days of Deadwood. 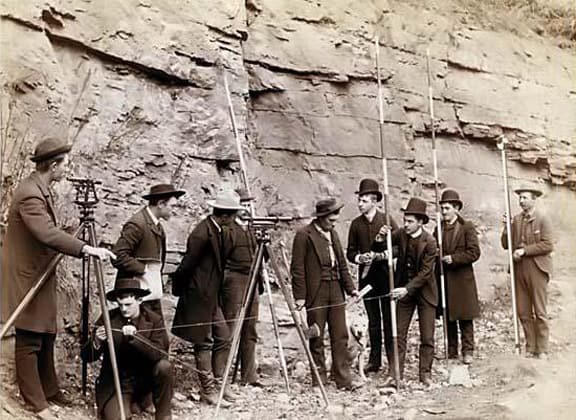 Deadwood Central R.R. Engineer Corps. Made in 1888 by Grabill, John C. H., photographer. The illustration documents an outdoor group portrait of ten railroad engineers, wearing suits and hats, and a dog, posing in a row with surveyors’ transits on tripods and measuring rods.

A narrow-gauge railroad, the Deadwood Central Railroad, was founded by Deadwood resident J.K.P. Miller and his associates in 1888, in order to serve their mining interests in the Black Hills. The railroad was purchased by the Chicago, Burlington and Quincy Railroad in 1893. A portion of the railroad between Deadwood and Lead was electrified in 1902 for operation as an interurban passenger system, which operated until 1924. The railroad was abandoned in 1930, apart from a portion from Kirk to Fantail Junction, which was converted to standard gauge. The remaining section was abandoned by the successor Burlington Northern Railroad in 1984. 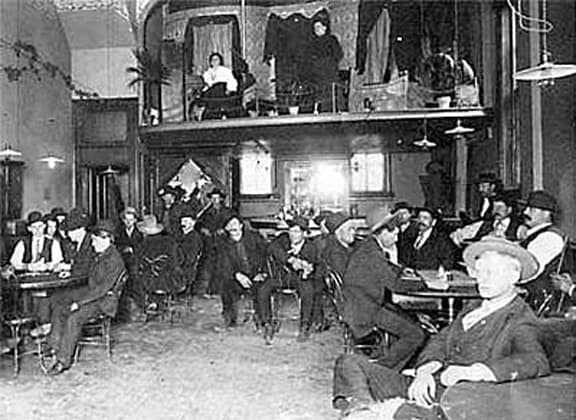 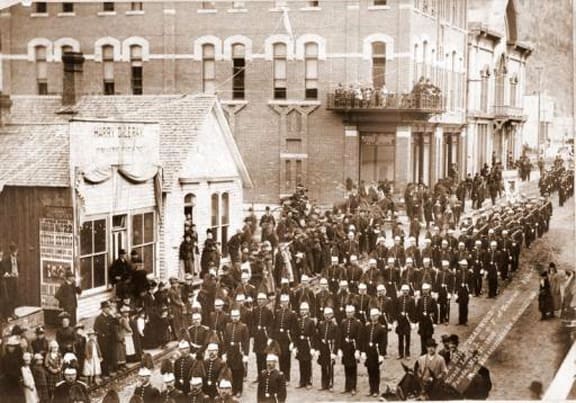 Deadwood Parade: Bystanders in the mining town of Deadwood in the Dakota Territory watch a group of uniformed men from the Grand Lodge I.O.O.F. [Independent Order of Odd Fellows] parade down the street on May 21, 1890. Photographed by John C. H. Grabill. 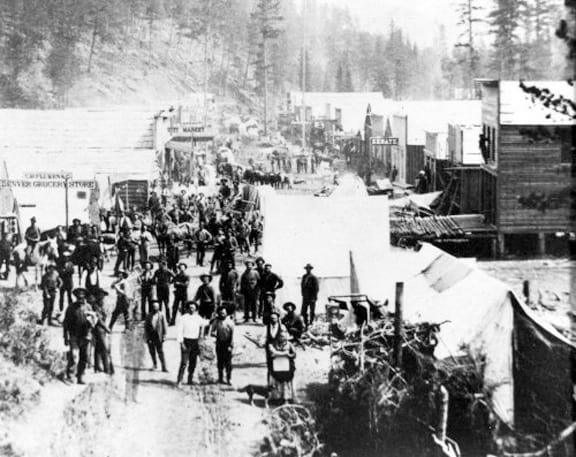 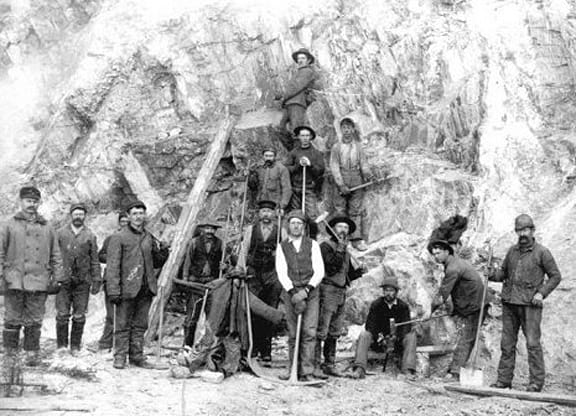 Gold mining in the Black Hills of South Dakota 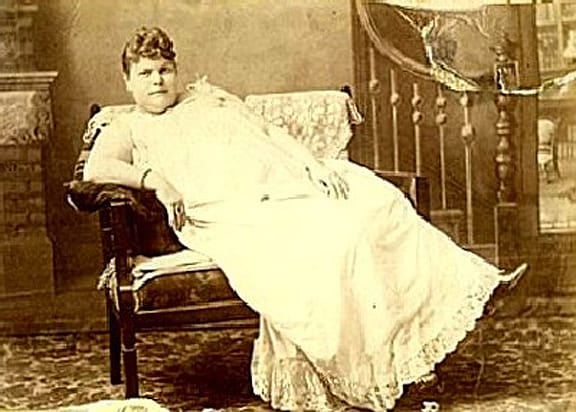 An unnamed prostitute from Deadwood in the 19th century.