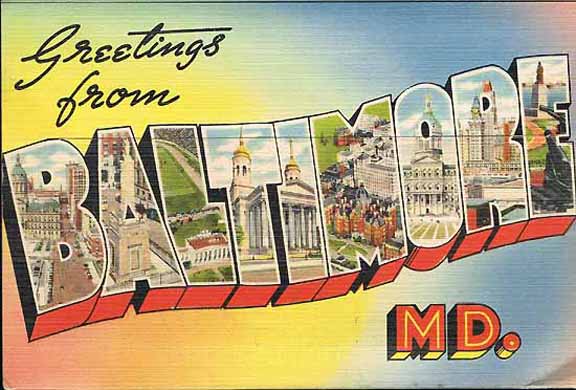 CRAB CAKES, BOTTLES and my MOTHER 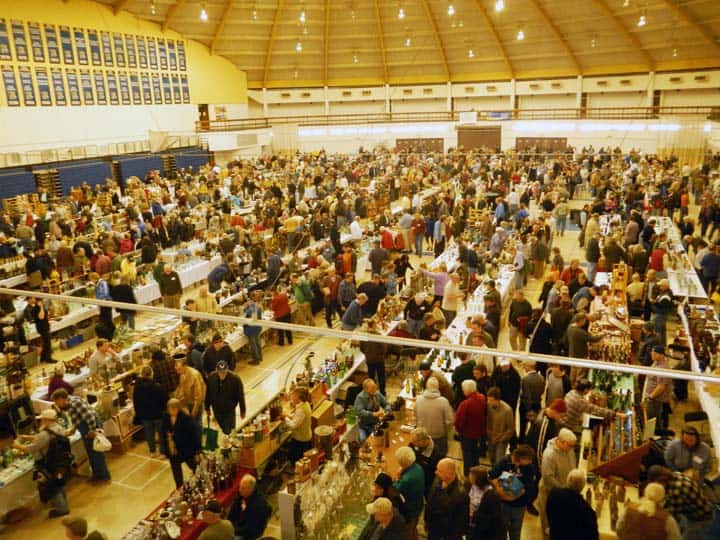 One of the biggest points about the Baltimore Bottle Show this year that I would like to make was the complete ‘flatness’ of Saturday evening. Basically it was a non-event. This is contrary to the many years previous, as the hottest bottle action usually occurs during this time period. Most collectors know this as they come from many locales from across the United States just to get in Saturday night, before the public comes in on Sunday. A number a folks routinely fly in from the west coast which is thousands of miles just for this early action. 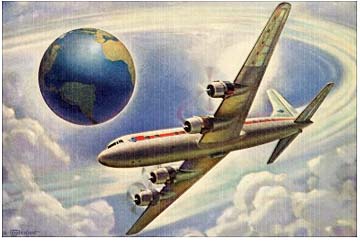 As many of you know, Saturday evening from about 4:30 pm to 8:00 pm, is reserved for dealer ‘set-up’. There are no early buyers and there is a strict Baltimore Bottle Club policy that only badged dealers and helpers are allowed in. In the proceeding months and weeks, many bottle collectors, who are neither a dealer nor helper, try to find ways to get in, usually by latching on to a table as a helper. Many come in using suspicious means. Obviously with my position as President of the FOHBC, I respect crowd control as we must watch over our shows and govern our attendees and crowds. I am thinking back to the Reno Expo.

Saturday evening is usually the most coveted time as you get the excitement of looking at great bottles as they are carefully unwrapped or unboxed for each table. The best finds can happen during this period as they have year after year. It is nerve wracking as you have to decide if you want to be at your own table selling or if you want to follow the crowd and the buzz. You can see pockets of eager onlookers at certain tables and you are anxious to move from pocket to pocket to see the goods. I have missed a number of great bottles including that great OK Plantation Bitters that Jack Stecher picked up last year in the opening minutes. I have also picked up some good bottles so it all evens out in the end. This is just part of the thrill of being a bottle collector and going to a major show.

Bottle Sighting of the Show 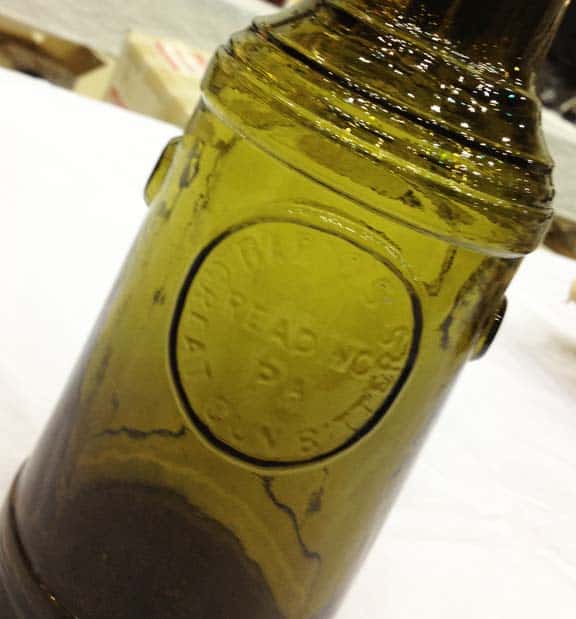 Catching Up With Bottle Friends

A few years ago I noticed that a few dealers were not even setting up on Saturday evening opting to buy and search instead. Last year it was really noticeable. Well this year, the tide finally turned and it seemed like most dealers, at least the ones that I like to visit did not set up Saturday evening. I even opted to bypass the set-up for the first time. Now maybe this is what the Baltimore Bottle Club has in mind as it certainly follows procedure, but is was kind of a let down. It pleasantly turned out to be one big social evening withs lots of friendship, people catching up, bottle stories and planning for crab cakes for dinner (see Part 1). 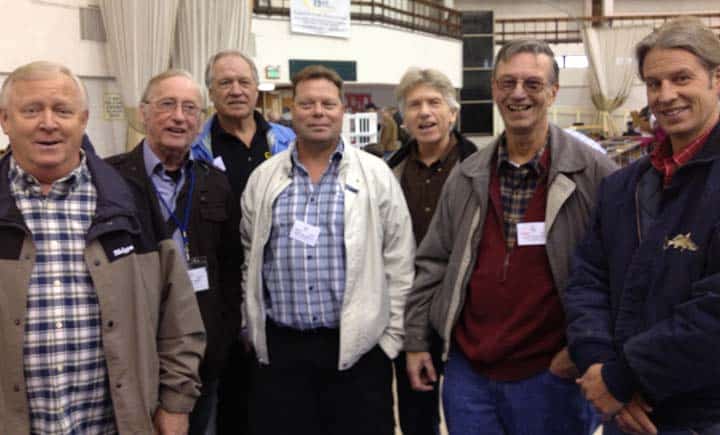 Sunday morning found Jerry Forbes and myself arriving to unpack and set up early as we did not set up the night before as noted previously. It was here that I found my four broken bottles (see Part I). The public gates opened precisely at 8:00 am and it was crowded and exciting. This year seemed busier than most because you had the public crowd and all of the dealers and helpers wheeling and dealing which would have occurred the night before. I must say, much transpired between 7:00 am and 9:00 am. I am still catching my breath and sorting out information in my head or on hastily scratched messages on pieces of paper and business cards. 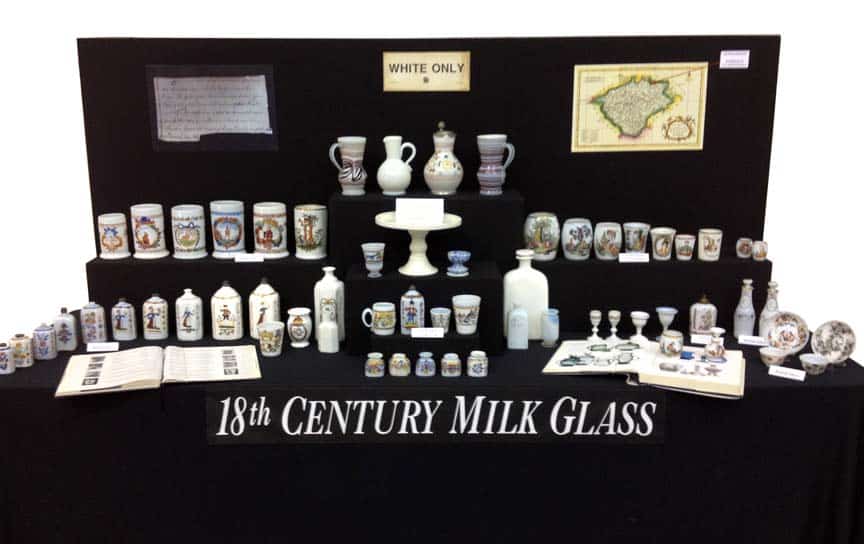 My table position at B8 and B9, in the second aisle near the front door, puts me real close to the excellent displays. My tables have been handed down through generations (I’m exaggerating a bit) through my father and brother. You do not want to lose your table as there is a waiting list like there is for season Redskin Tickets. I guess it will be the same for the Baltimore Ravens since they won the Superbowl. I think I saw more Ravens shirts than bottle related shirts this year! Baltimoreans love their football. This year there were five or so displays including the Steve Charing “Barber Shop” display (Best in Show), the Gary Katzen “18th Century Milk Glass” display (Peoples Favorite) the “Early American Pottery” display, “Figural Decanters” display and the “Cone Inks” display among others. 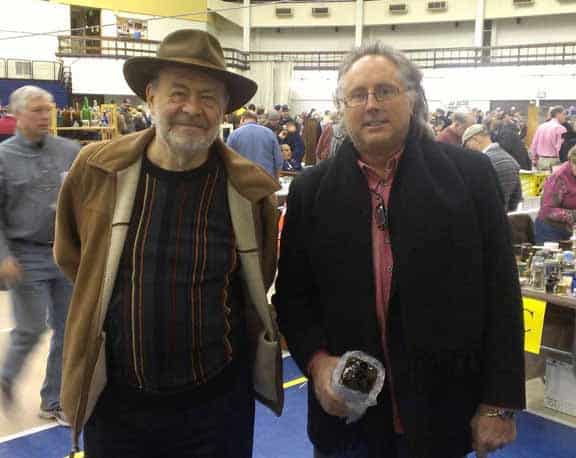 I also met some great people this year including Jack Sullivan (pictured above – FOHBC Hall of Fame winner last year), Stephen Jackson (Warner’s Safe Cure Blog), Gary Katzen (Milk Glass fame), Andy Goldfrank (historian and digger), Eric Richter (Researcher), Joseph Gourd (Bitters trade card king). These are just a few names listed here as there are many others not listed that have visited Peachridge Glass, PRG facebook or are new FOHBC members that stopped by the table to say hi and to introduce themselves. 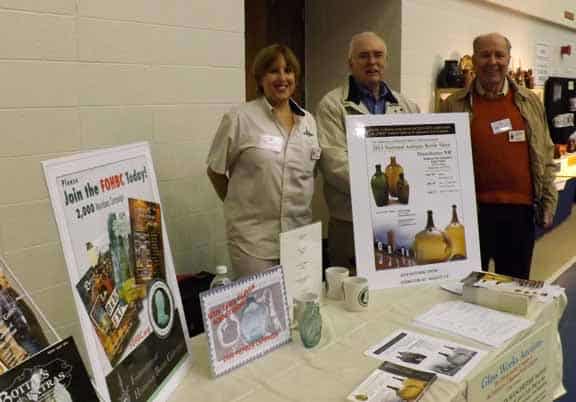 I was really pleased with the FOHBC table team at the show. The Federation table looked better than ever with a magazine rack full of the latest issues of the Bottles and Extras magazine, a membership poster, a membership contest bottle prize and bright smiley faces such as Pam Selenak, Alan DeMaison, Bob Ferraro, Sheldon Baugh, Tom Phillips and James Bender who sold close to thirty new memberships which has to be a record for a one-day show. Hats off to the crew at the table! 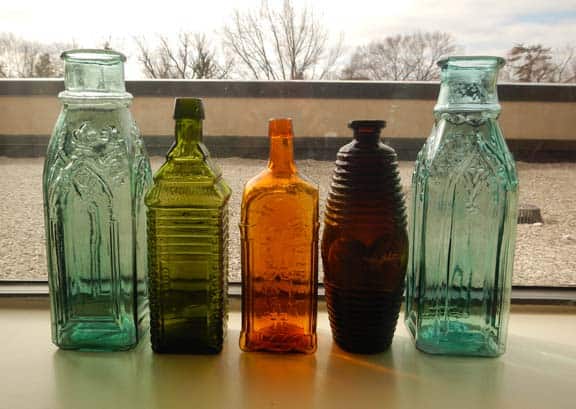 My table-mate Jerry Forbes continued his streak of hitting a grand slam by pulling in some of the greatest bottles during the show. He usually takes them back to his hotel room and does either a window shot or a refrigerator shot depending on the setting sun. This year was no exception with Jerry reeling in two cathedral pickles, a killer green Drake’s Plantation Bitters, an Old Continental Whiskey and a labeled Bourbon Whiskey Bitters barrel (all pictured above).

Another great show, the best in my book. Sandor Fuss adds in an e-mail “P.S. The Baltimore show was the just the best! I had a great time. It really is by far my favorite show and in my opinion the best in the country.”

There is also a rumor that the Baltimore Bottle Club might be receptive to hosting a FOHBC National Show down the road at some point. The next available slot might be the 2016 EXPO. Wouldn’t that be something? Thinking 500 table mega event downtown at the inner-harbor. 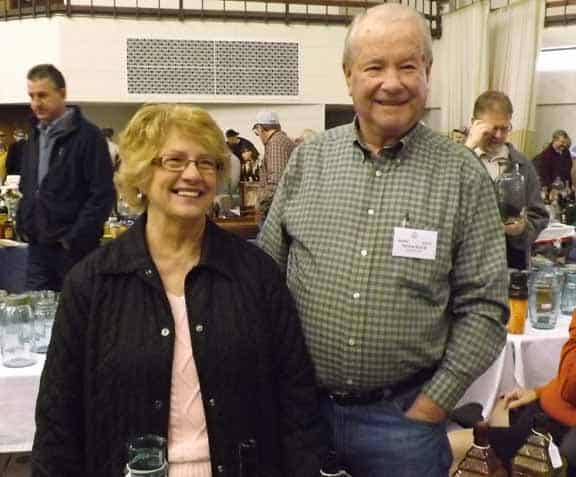 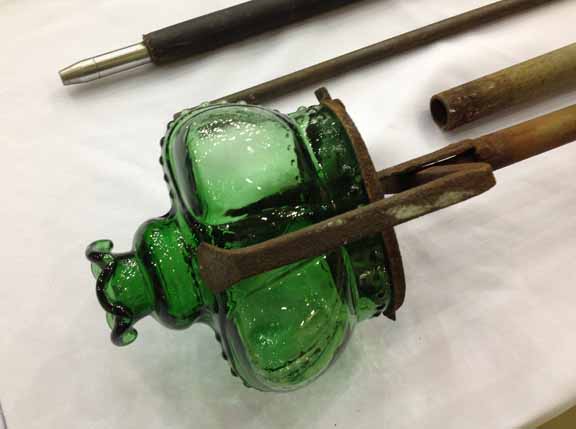 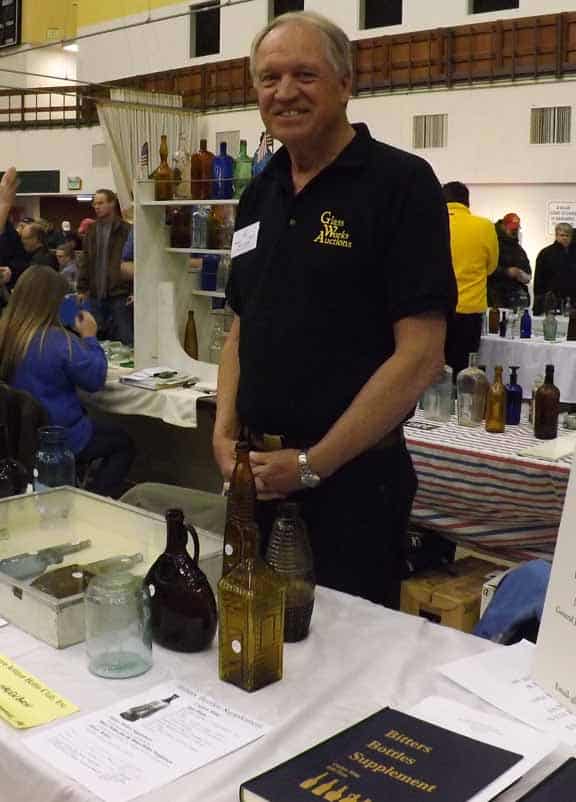 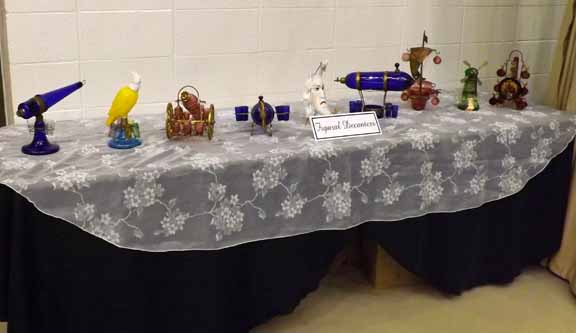 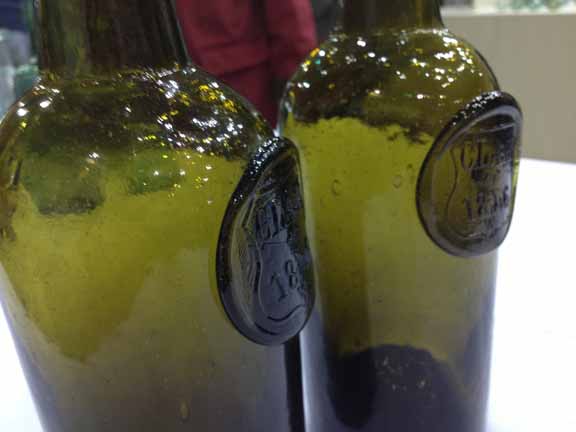 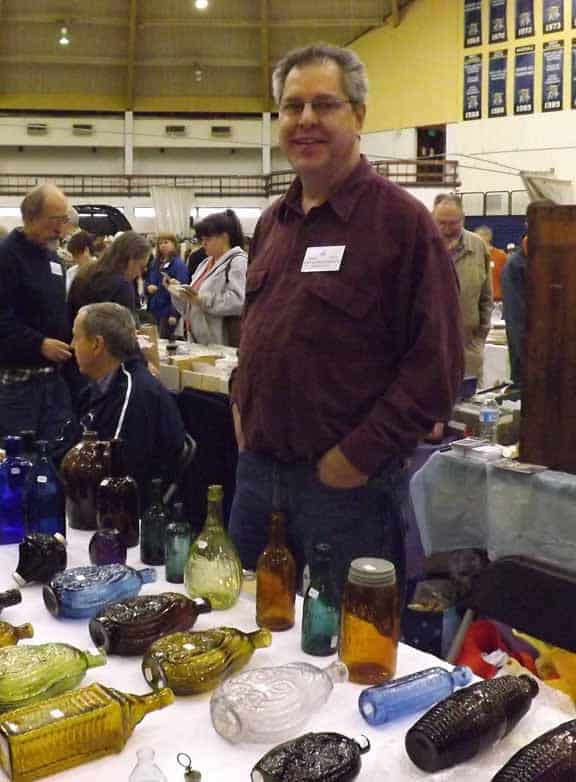 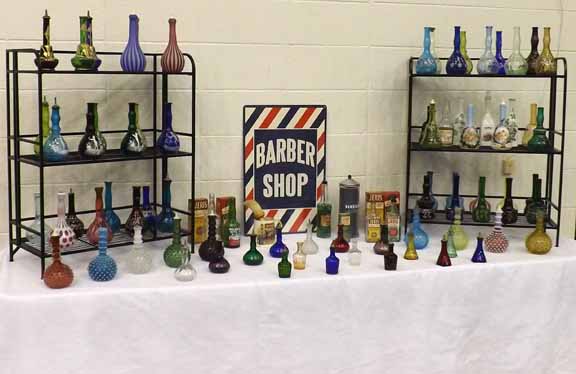 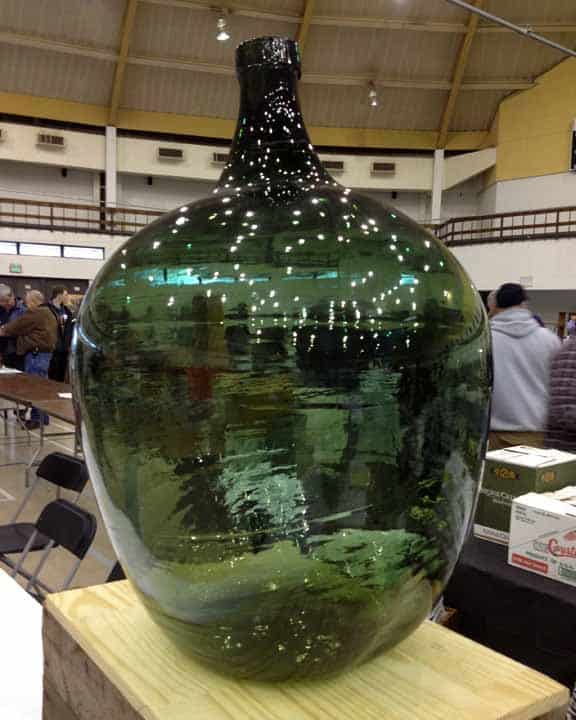 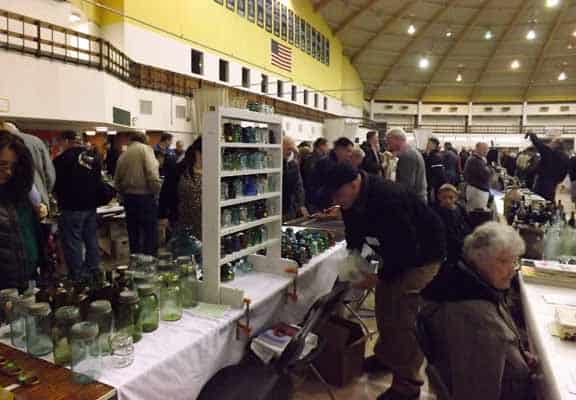 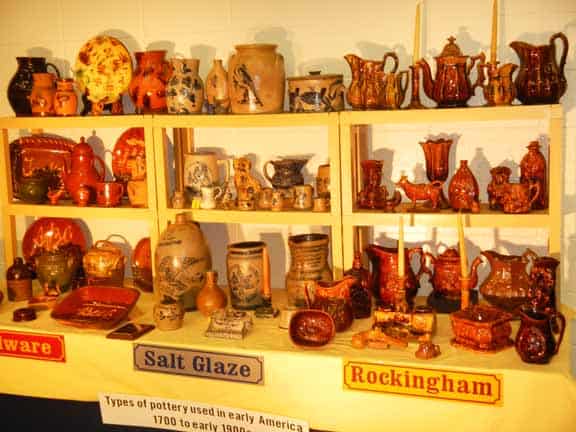 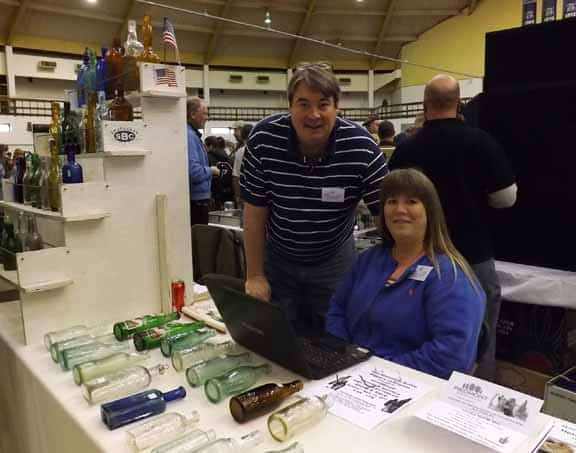 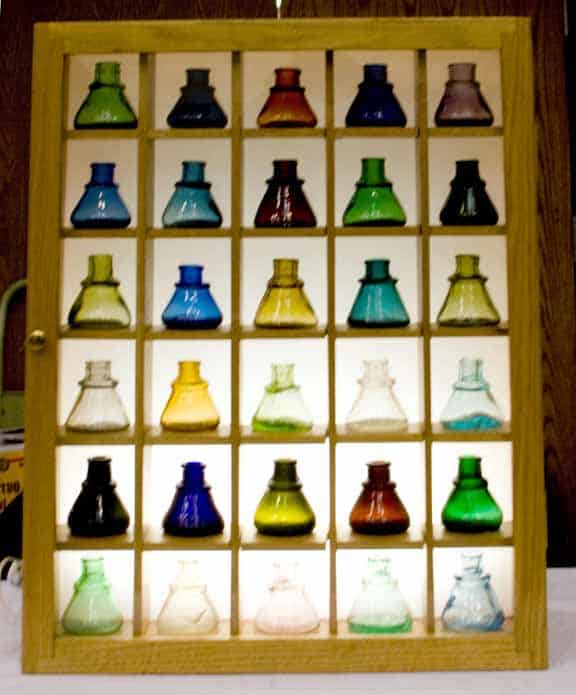 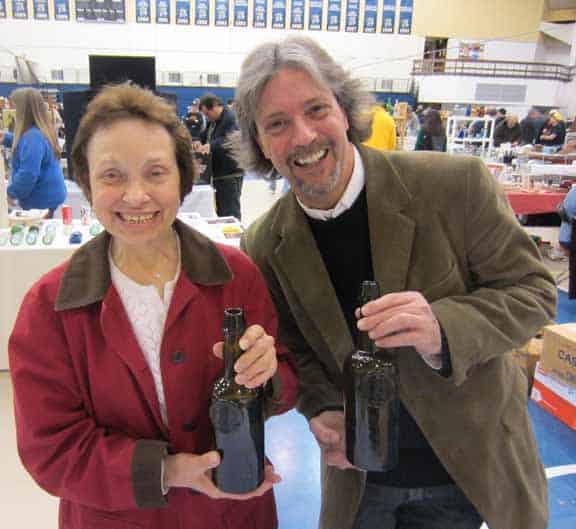 Ferdinand Meyer V is a native of Baltimore, Maryland and has a BFA in Fine Art and Graphic Design from the Kansas City Art Institute and School of Design. Ferdinand is the founding Principal of FMG Design, a nationally recognized design consultation firm. Ferdinand is a passionate collector of American historical glass specializing in bitters bottles, color runs and related classic figural bottles. He is married to Elizabeth Jane Meyer and lives in Houston, Texas with their daughter and three wonderful grandchildren. The Meyers are also very involved in Quarter Horses, antiques and early United States postage stamps. Ferdinand is the past 6-year President of the Federation of Historical Bottle Collectors and is one of the founding members of the FOHBC Virtual Museum.
View all posts by Ferdinand Meyer V →
This entry was posted in Advice, Bitters, Bottle Shows, Club News, Collectors & Collections, Display, News and tagged Baltimore, Barto's Great Gun Bitters, fohbc, Gary Katzen, Jack Sullivan, Jerry Forbes, Joseph Gourd, sandor fuss, show, Stephen Jackson. Bookmark the permalink.