The Roads of Research 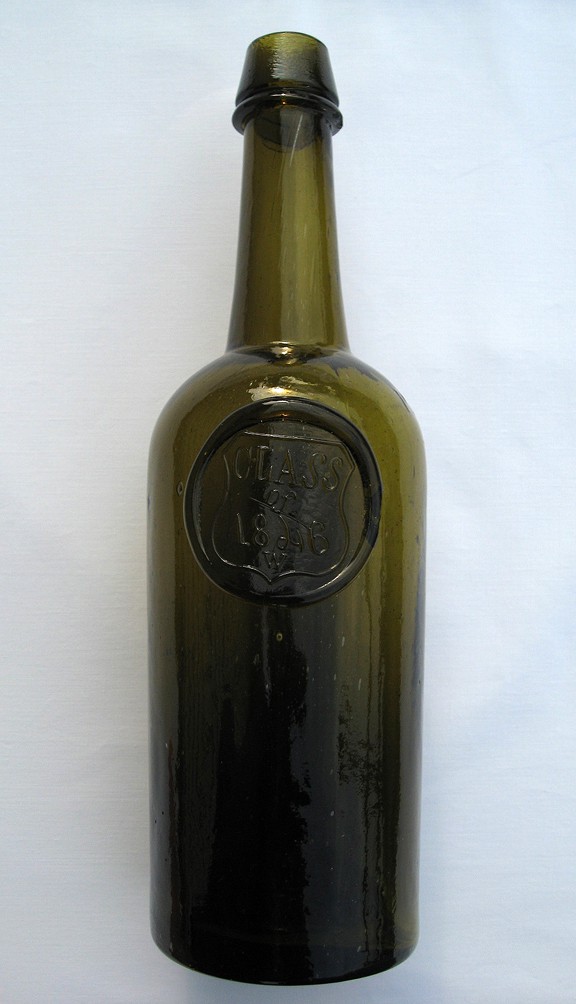 Embossed “CLASS OF 1846 W” Dyottville cylinder – Was it made to commemorate West Point? – Richter Collection

I really like it when I get an email from Eric Richter. It is interesting to watch his enthusiasm and passion for glass. I think you will see what I mean by reading this incoming email. Eric ‘on the hunt’. I have added some imagery to support the copy. 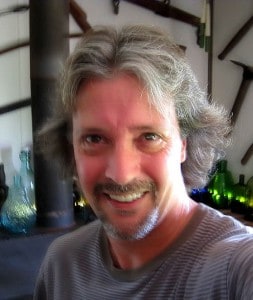 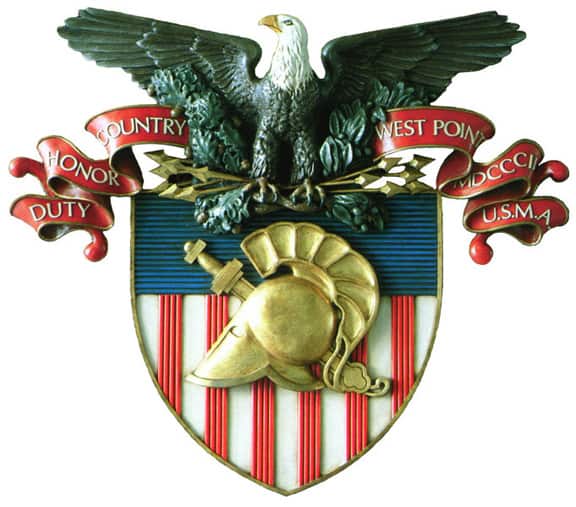 The research on this bottle is like a road with many exits and attractions, not sure if you want to add the below information or not, but it definitely puts the “H” in FOHBC.

I am intrigued by the repsonses thus far, and I didn’t realize just what I had written until I re-read the posted email. I had literally just “Brain-Dumped” all that I knew off the top of my head in the 15 minutes I spent hammering it out. I actually spent more time taking the three pictures of the bottle. Not realizing that I was writing a “Thesis” as Jeff (Noordsy) observed. It’s 2:22 AM and I’ve just spent three hours engrossed in the Library Archives of West Point that are available online in PDF and it’s literally astounding; the history, people, and fascinating events that took place there. What’s making this research on the bottle so time consuming is the constant distraction of the amazing history of West Point itself. 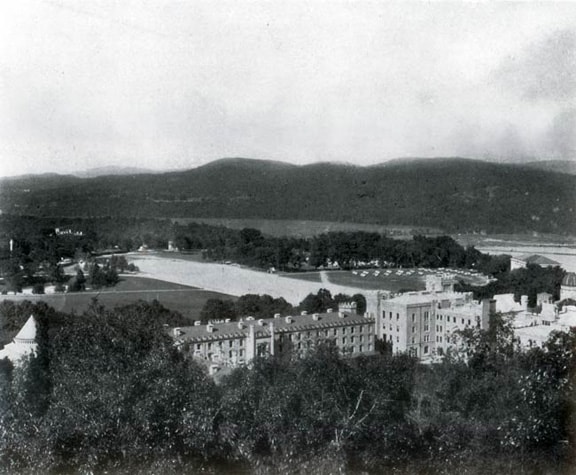 I was quick to write that the Institution would never have allowed drinking on the premises, yet Superintendent Thayer let the Cadets drink on the 4th of July and Christmas up until July 4th, 1825 when things got out of hand and a “Snake Dance” was had by the Cadets in which Commandant William Worth as hoisted and carried on the shoulders of Cadets into the barracks which outraged Thayer and from that day he would no longer permit it. (He would leave the grounds for the day so he would not have to observe the Cadets drinking.)

Still trying to research the bottle, but this can’t remain unread:

Then there was the “Grog Mutiny,” or “Eggnog Incident” on Christmas, 1826, when Cadet Jefferson Davis warned a barracks room party that the Officers were coming up, which they were, and curiously, Davis was arrested and sent to his room while the partying cadets in the room got violent and broke chairs and threw furniture at the Institute Officers resulting in 11 expulsions. However, Cadet Jefferson Davis remained at West Point and graduated in 1828. (Cadet Robert E. Lee graduated in 1829.) 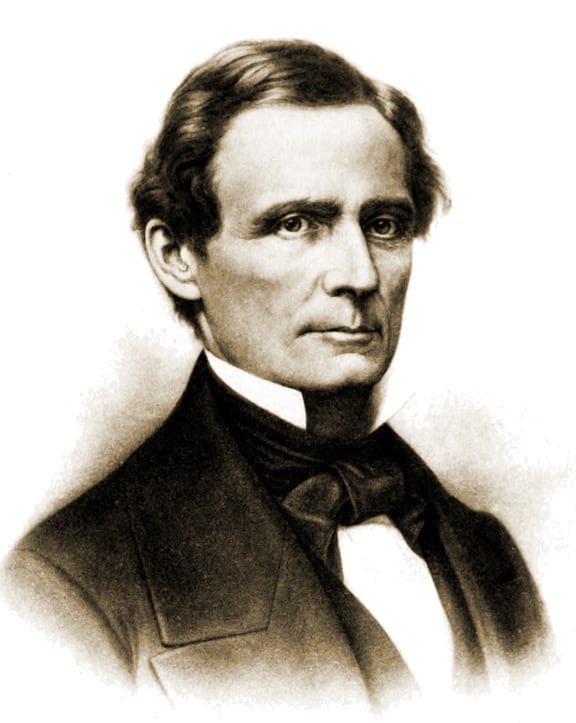 Jefferson Davis, President, Confederate States of America, 23rd of 32, Class of 1828. In 1825 future Confederate President Jefferson Davis was in the first group of cadets ever to be court-martialed for carousing at Benny Havens’. Cadet Davis and four others were charged with two specifications of a new regulation, namely, “drinking spirituous and intoxicating liquor” and “going to a public house or place where spirituous liquors are sold,” as well as leaving post without permission.

More on the Eggnog Riot: The Eggnog Riot, sometimes known as the Grog Mutiny, was a riot that took place at the United States Military Academy in West Point, New York, on 24–25 December 1826. It was caused by the smuggling of whiskey, two days prior to the incident, to make eggnog for a Christmas Day party in the North Barracks of the Academy. The riot eventually involved more than one-third of the cadets by the time it ceased on Christmas morning. A subsequent investigation by Academy officials resulted in the implication of seventy cadets and the court-martialing of twenty of them and one enlisted soldier. Among the participants in the riot—though he was not court-martialed—was Jefferson Davis. [Wikipedia]

Still trying to stay focused on the Bottle again, but now I HAVE to read about Poe: Edgar Allan Poe (January 19, 1809 – October 7, 1849) was an influential American poet, novelist, short story writer and literary critic. The majority of his writings, both poetry and prose, fall within the horror genre. He is sometimes credited with inventing modern detective fiction with his 1841 short story Murders in the Rue Morgue.

Then there’s Edgar Allen Poe, who literally walked from Baltimore to Washington, in the heat of July, 1828, to see if he’d been granted his request to join West Point; after leaving Charleston, South Carolina a few years earlier $2,500 in debt to gamblers and going to Boston and joining the Army under the name Edgar A. Perry and then hiring a substitute so he could be discharged. He went to West Point thinking with his army experience he could (somehow) go through the institution in 6 months. When it dawned on him that he’d be there for the full 4 years, he got himself expelled in 1831. He was in the Class of 1833. He published his 3rd book of poems while at West Point, using fellow cadet subscribed funds and $168.70 later got 500 copies published which ended up being sent to West Point after he was expelled. The Library Archive article even shows a copy (they have the original) of the Academy check made out to him for $170.00 for the books, most of which, it’s stated, the cadets threw as far as they could into the Hudson River in anger. 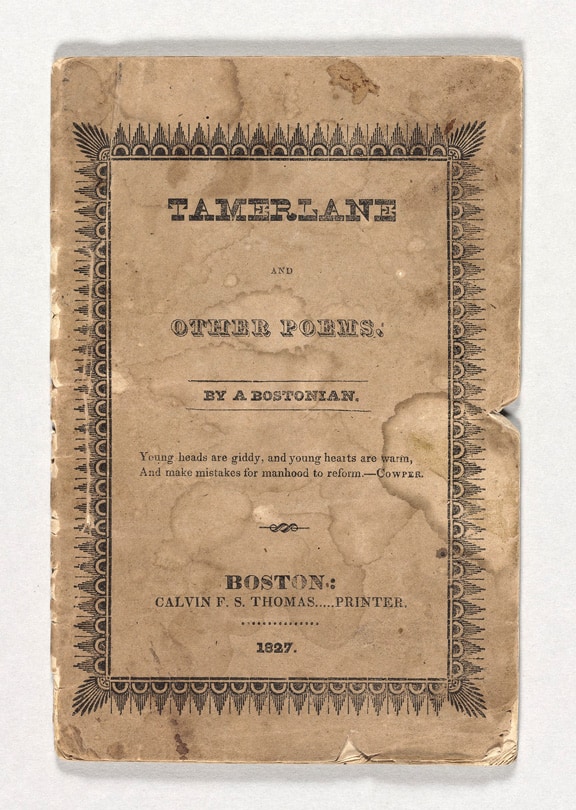 “Tamerlane and Other Poems” sold for $662,500, according to Christie’s; no word on the buyer. This afternoon, Christie’s will auction a rare first edition of Edgar Allan Poe’s first book, “Tamerlane,” but don’t hold your breath for a Baltimore buyer to claim it. The Baltimore Sun’s Chris Kaltenbach explored the possibility of a local buyer emerging, but the cash-strapped Enoch Pratt isn’t likely to bid for the book, estimated to cost at least $500,000. And the Johns Hopkins University’s Sheridan Libraries, which has a Poe collection, also appears out of the running for “Tamerlane” — one of only 12 copies known to exist. But maybe a local philanthropist will emerge. – The Baltimore Sun 2009

Then, in 1966, a rare copy of the same 1831 Poe book comes up in a New York City auction and West Point decides it wants one, so an Officer, the Assistant Librarian, and a 3rd member drive to the auction only to end up getting outbid by a rare NY book dealer; they had brought $5000, but it was to be “Nevermore,” just not enough, until later, a outside party donated the difference and they were able to secure the faded, stained copy for their posterity.

Trying to research this bottle is like walking through a house where there’s something so intriguing and compelling in each room that you don’t want to leave it just yet to go on to the next. (Much like the Meyer Collection, I’m sure 😉 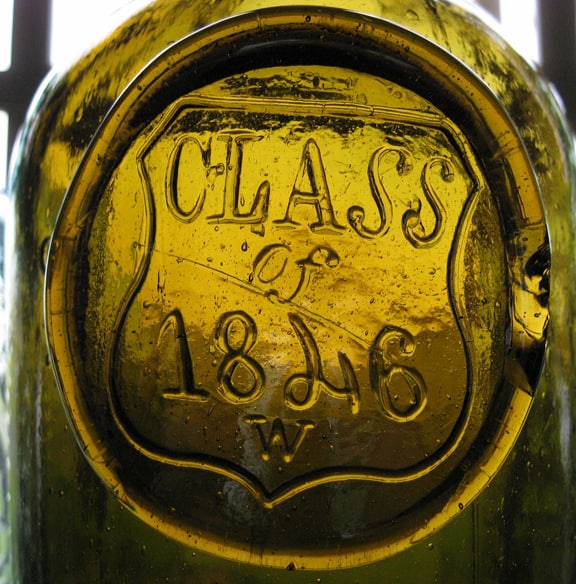 The lettering style on the seal of the bottle (see above) may be a clue in itself. Note the difference in the LA in CLASS, is it a CLUE? Why is the “C” straight, the “LA” huge and different type and the “SS” more matching to the rest of the font? Is it a McClue? A McClellan clue? If the seal was the inexpensive way for someone to have a number of bottles made to commemorate an event rather than having expensive molds made; then why were the letters in the seal stamp so mismatched? Was it on purpose? Very hard to say, but very interesting. The McClellans were a very prominent family in Philadelphia where the bottles were made. I am very much entertaining the thought that it’s very possible the McClellans may have hosted a Graduation Party as Cadet George wanted so much to be first in the class and would settle for nothing less. So far, that’s what I’m looking into.

I’m feeling like a serious article may be the result of this bottle. Every question raises three more, yet I’m on the right track, but there are so many enjoyable “roadside events.”

Ferdinand Meyer V is a native of Baltimore, Maryland and has a BFA in Fine Art and Graphic Design from the Kansas City Art Institute and School of Design. Ferdinand is the founding Principal of FMG Design, a nationally recognized design consultation firm. Ferdinand is a passionate collector of American historical glass specializing in bitters bottles, color runs and related classic figural bottles. He is married to Elizabeth Jane Meyer and lives in Houston, Texas with their daughter and three wonderful grandchildren. The Meyers are also very involved in Quarter Horses, antiques and early United States postage stamps. Ferdinand is the past 6-year President of the Federation of Historical Bottle Collectors and is one of the founding members of the FOHBC Virtual Museum.
View all posts by Ferdinand Meyer V →
This entry was posted in Civil War, Collectors & Collections, History, Questions, Spirits, Whiskey and tagged Baltimore, cadet, Edgar Allen Poe, Eggnog Incident, Grog Mutiny, Jefferson Davis, McClellan, New York, Robert E. Lee, Thayer, U.S. Military Academy, Washington, West Point, William Worth. Bookmark the permalink.