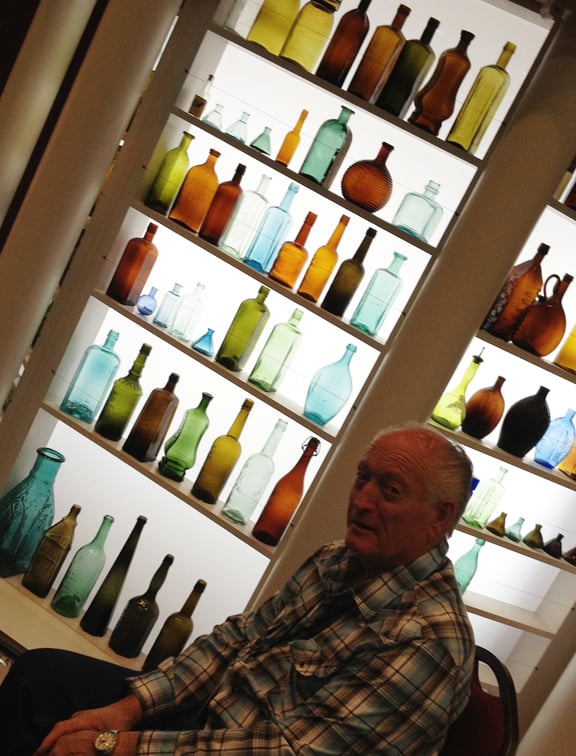 Richard Siri sitting ‘Watch’ over the Northwestern Bottle Club’s Gazebo at the 2012 FOHBC Reno Expo. You can see Richard’s BRYANT’S STOMACH BITTERS cone and ladies leg in the bottom shelf.

It seems like a good time to corral the various known specimens of Bryant’s Stomach Bitters. Two examples were seen at the FOHBC 2012 Reno Expo which is quite extraordinary. I almost brought mine for display too and would have placed in the famous Gazebo exhibit that was set up (see above). Here are the examples that I know of. I hope to update and clarify this list.

“It is believed that there are only four intact Bryant’s Stomach Bitters and another three examples that have been repaired or pieced together. It is reported that an intact example was recovered from Sacramento sometime in 1962 and another complete Bryant’s was un-earthed in the gold rush town of North San Juan. The third complete specimen of the Bryant’s was discovered at the “big dig” in San Francisco and a fourth example was found in Portland”.

Specimen 1 – Jim Chebalo (resides East Coast). Possibly first full, intact example found. . Note: We have heard from Jim and he has confirmed that there is NO repaired lip chip and the specimen is in good order. 12 August 2012.

One of the rarest and most desirable bitters bottles ever found, the Bryant’s Bitters, was recently purchased in a private sale by Ferdinand Meyer and his lovely wife Elizabeth. With only a few Bryant’s in existence, this example is arguably the most famous antique bottle known having been on various television programs including the Travel Channel’s, Cash and Treasures and CNN along with other news shows. Articles on the bottle have appeared in numerous publications and it has almost become a symbol for the bottle collecting community.

Its real claim to fame is the fact that it set a record for the most ever paid for a bottle at auction. Sold by Pacific Glass Auctions, now known as American Bottle Auctions in 1999, it brought in a staggering $68,750, still a record for any bottle sold at auction. The original buyer of this 1850’s bottle, Robert Frank, decided it was time to let someone else enjoy it. The bottle was originally unearthed in what is now termed the “Big Dig,” referring to a dig of a mid-19th Century recycling plant in downtown San Francisco. There were actually two found but one of the examples was damaged. The bottle is so highly desired because of its unusual shape, it is officially known as the cone or megaphone. The fact that it is one of the earliest western bitters and one of only a few known also adds to its legendary status. The Bryant’s was most likely made in the east and delivered to San Francisco via ship around the horn.

So what are Ferdinand and Elizabeth going to do with their new acquisition? “Put it in a special shelf I designed,” says Meyers. With the bottle standing 14” high, that should be no easy task. The Bryant’s cone should go well with another recent acquisition by Ferdinand and his wife, a blue Fish Bitters, recently acquired at the National Show in Pomona, California. Why two of the rarest bottles known being bought within weeks of each other? “Sometimes the stars align for a brief period of time,” says Meyer, “and you just have to do it,” he said smiling broadly. The odd shape of the Bryant’s “cone” didn’t last long, as the clumsy eight-sided bottle was quickly re-designed to a less precarious stature. Rumors have the bottle selling in the six-figure category. 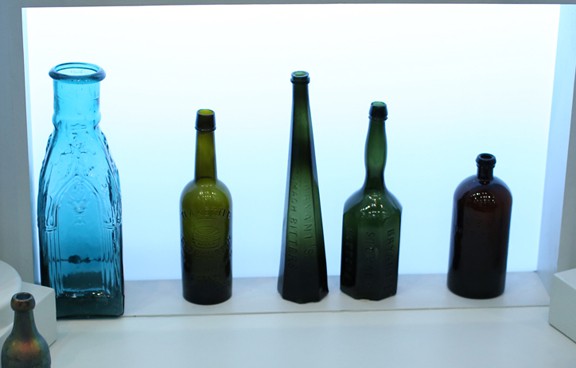 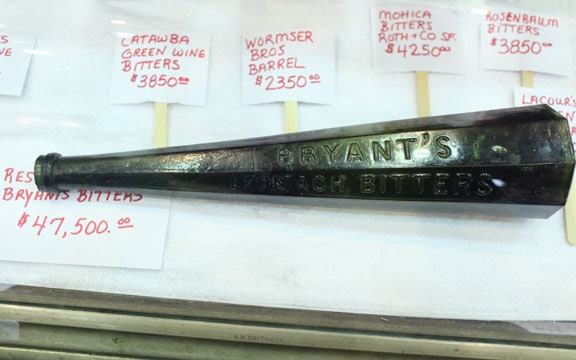 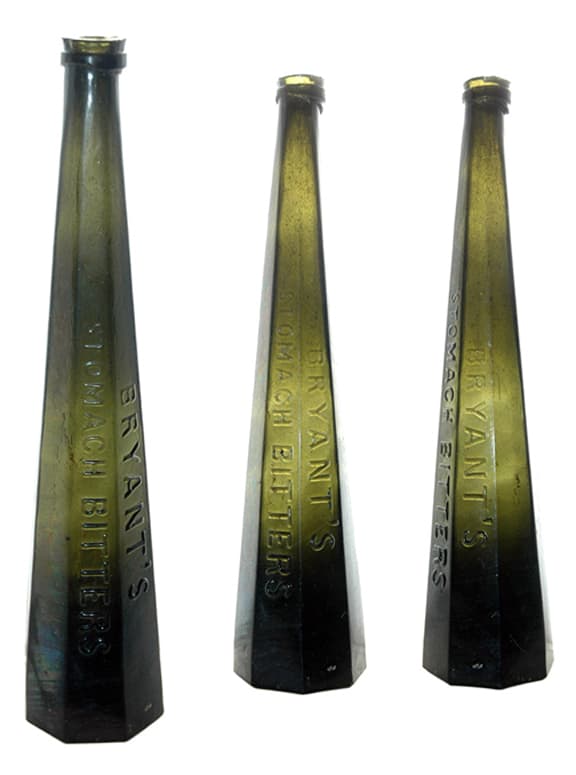 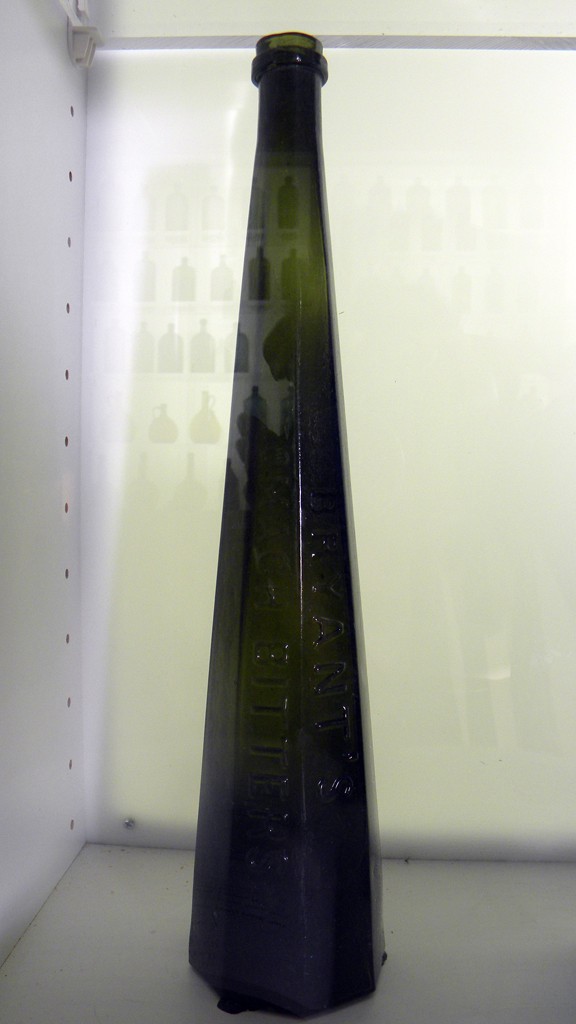 Ferdinand Meyer V is a native of Baltimore, Maryland and has a BFA in Fine Art and Graphic Design from the Kansas City Art Institute and School of Design. Ferdinand is the founding Principal of FMG Design, a nationally recognized design consultation firm. Ferdinand is a passionate collector of American historical glass specializing in bitters bottles, color runs and related classic figural bottles. He is married to Elizabeth Jane Meyer and lives in Houston, Texas with their daughter and three wonderful grandchildren. The Meyers are also very involved in Quarter Horses, antiques and early United States postage stamps. Ferdinand is the past 6-year President of the Federation of Historical Bottle Collectors and is one of the founding members of the FOHBC Virtual Museum.
View all posts by Ferdinand Meyer V →
This entry was posted in Article Publications, Bitters, Collectors & Collections, Digging and Finding, Figural Bottles, History, News, Questions and tagged American Bottle Auctions, Bill Ham, bitters, Bob Kaiser, Bryant's, cone, Ferdinand Meyer V, gazebo, Jeff Wichmann, Jimmy Chebalo, ladies leg, Richard Siri, Robert Frank, Stomach, Ted Siri. Bookmark the permalink.