Bryant’s Stomach Bitters aka The Cone 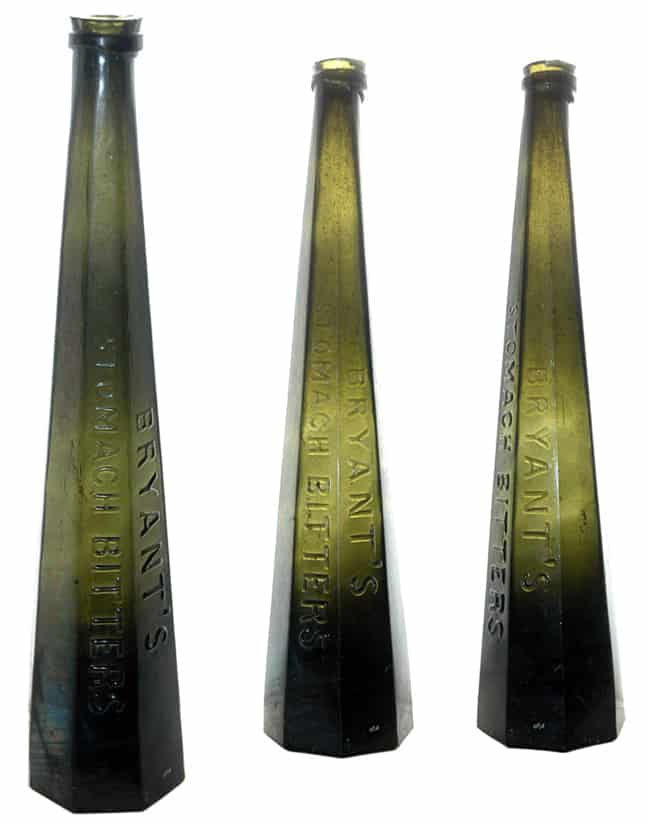 Bryant’s Stomach Bitters aka The Cone

Dr. George N. W. Bryant started an apothecary in New York City in 1845 and by the early 1850s, had created what has become one of the most sought after bitters containers in the bottle collecting community. My example is pictured above. This bottle was manufactured in the east from about 1857 to 1865 and was distributed out west during the years 1857-1859. The firm of William Newell & Co, an early San Francisco wholesale liquor house, were the agents for Bryant’s Stomach Bitters on the Pacific Coast.

Here are some new advertisements I found in New York City and west coast newspapers. 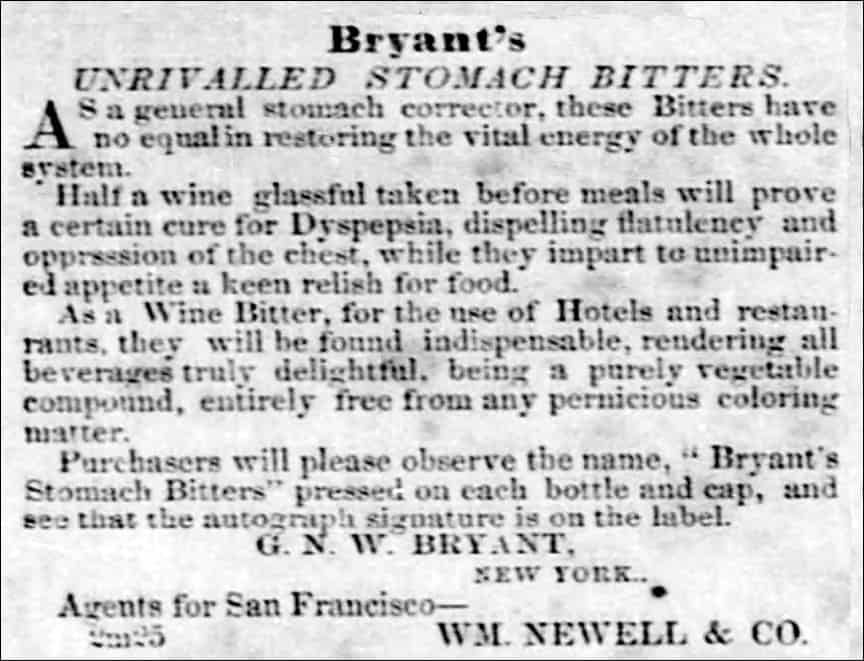 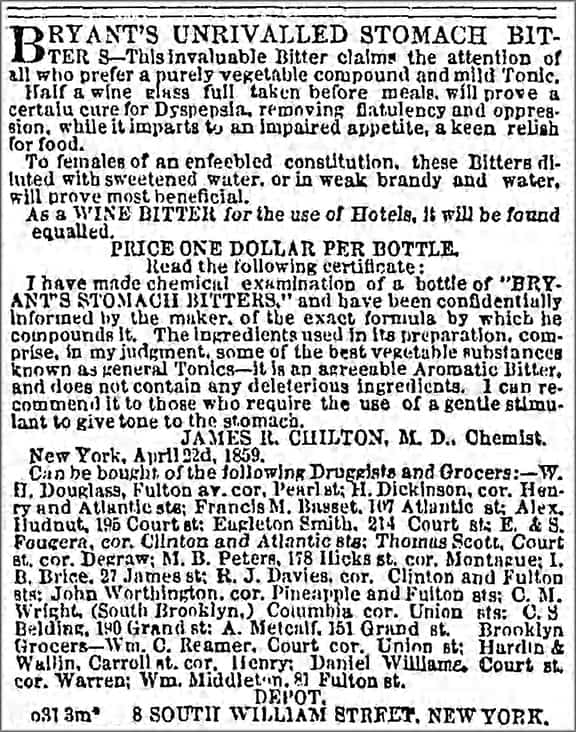 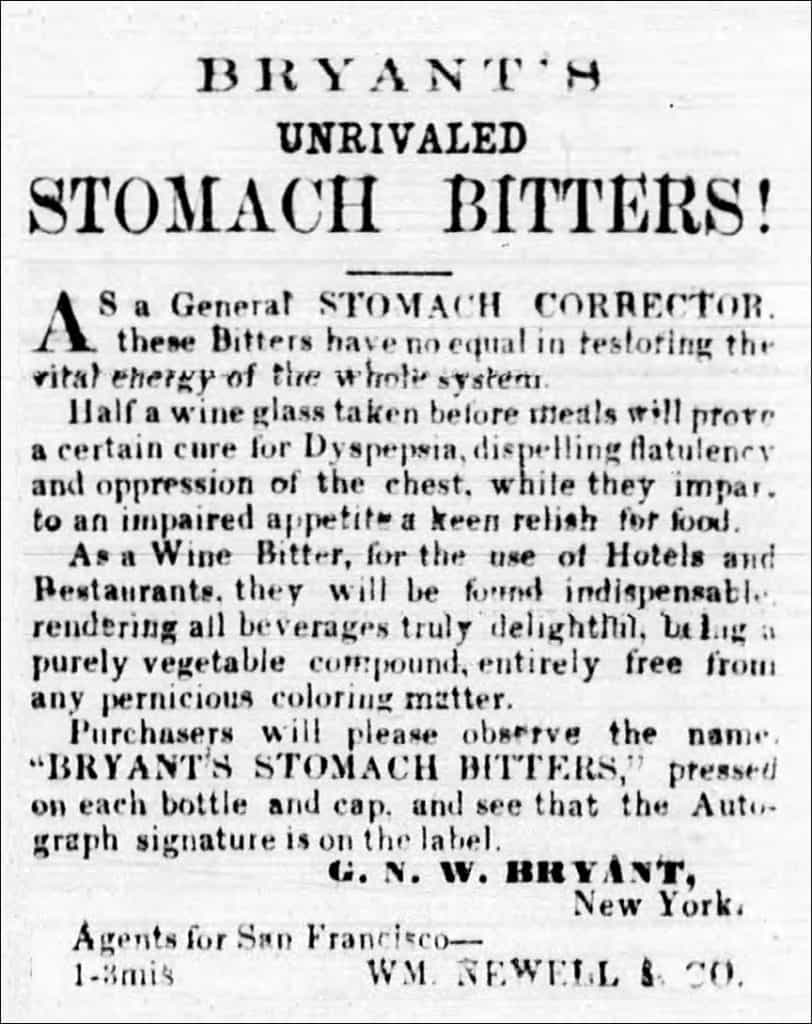 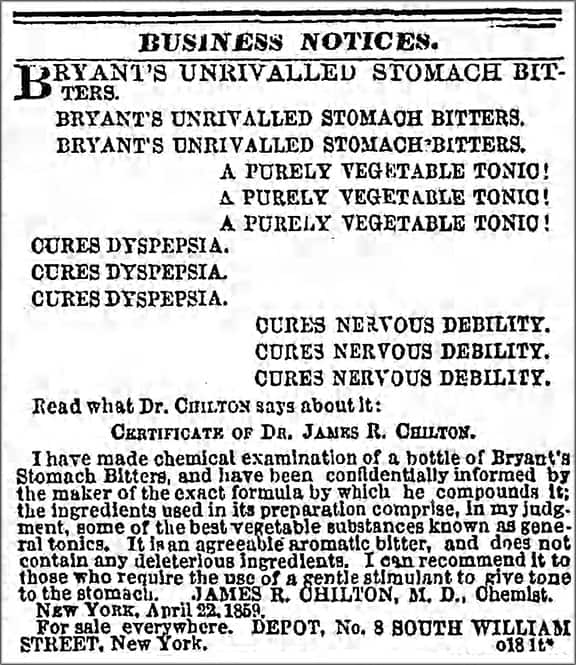 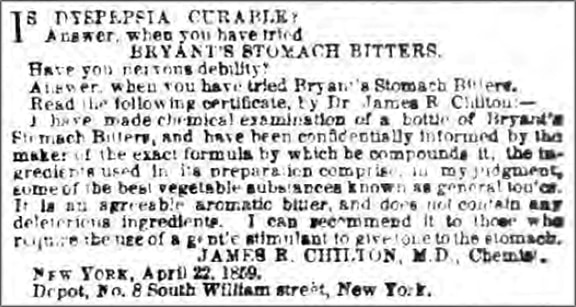 In his advertisements, Bryant claimed his bitters were an unrivaled stomach corrector and had no equal at restoring the vital energy of the entire system. He recommended a half a glass of his wine bitters before meals to impart a keen relish for food. Bryant probably only produced this bitters from 1859 to 1865 in New York City before he moved into flavoring extracts.

Early day Downieville bottle diggers claim to have found pieces of the Bryant’s cone shaped bitters in the downtown area behind the present day Yuba Theater. A Nevada City digger reports that shards of the Bryant’s cone were discovered in the town of Camptonville in Yuba County. Camptonville sits twenty miles south-west of Downieville on the early supply road from Marysville to Downieville. A broken example was dug in San Francisco in the 1990s along with shards of another example. Recent broken examples were dug near Sacramento as reported by Jeff Wichmann on his website American Bottle Auctions.

It is believed that there are only four intact Bryant’s Stomach Bitters and another three examples that have been repaired or pieced together. It is reported that an intact example was recovered from Sacramento sometime in 1962 and another complete Bryant’s was un-earthed in the gold rush town of North San Juan.

The third complete specimen of the Bryant’s was discovered at the “big dig” in San Francisco and a fourth example was found in Portland. Two of the four intact examples of the Bryant’s are located in California collections. The ‘big dig” Bryant’s (pictured above) was sold by Robert Frank (pictured below) in a deal brokered by Jeff Wichmann to Ferdinand Meyer V in Houston, Texas in July 2009.

According to Jeff Wichmann, in the minds of the Bryant’s Bitters folks, this oddly shaped container just wasn’t going to work. It was too gangly and most likely fell over more often than not. They quickly switched to another popular bottle with the same embossing but in a completely different shape, a six-sided lady’s leg highly desired by collectors today (pictured below). The cone shape was scrapped and after a very short production run, were discarded and left for collectors to drool over a hundred years later. 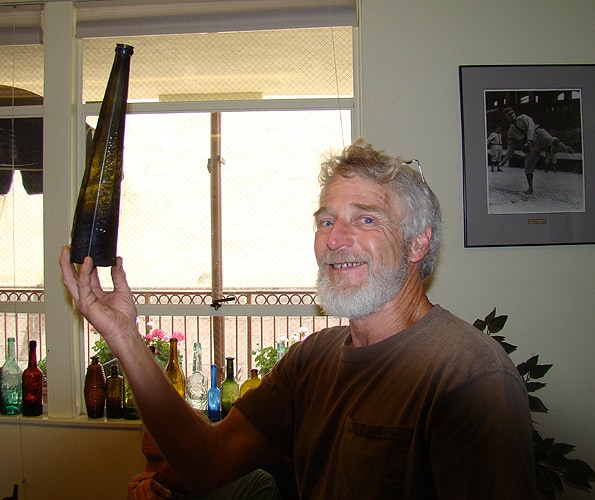 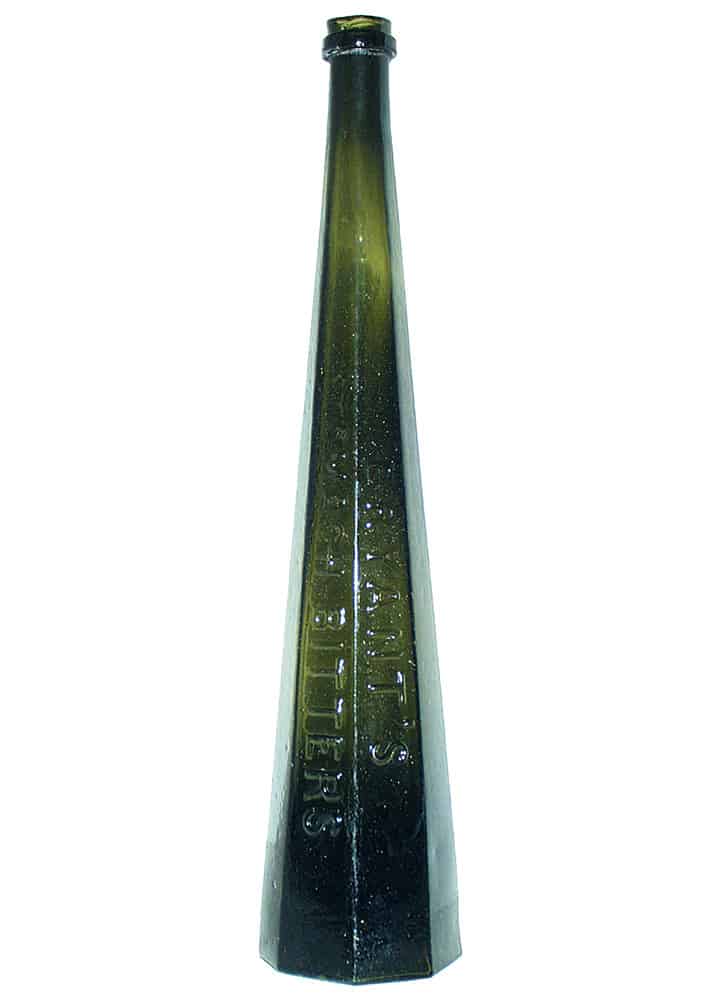 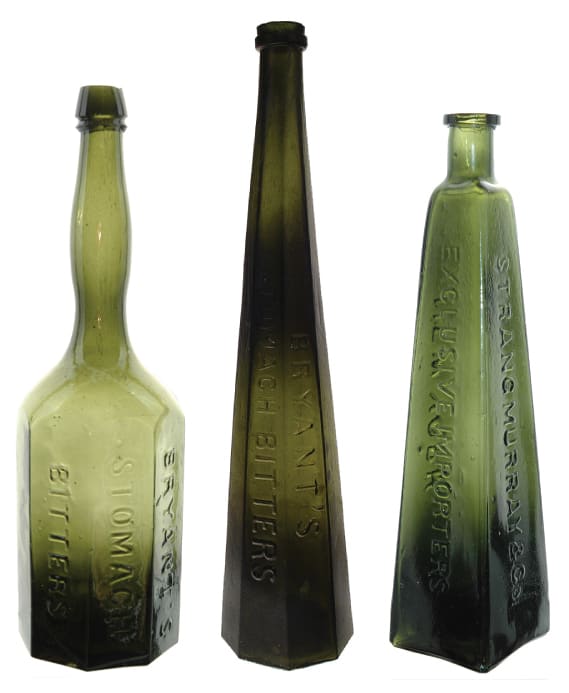 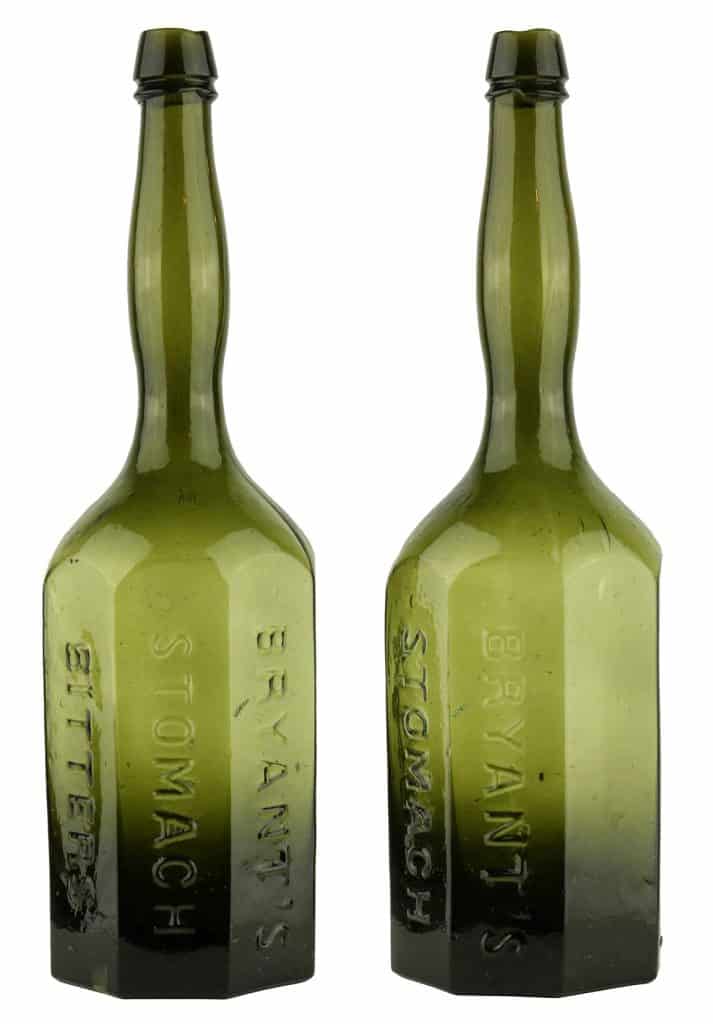 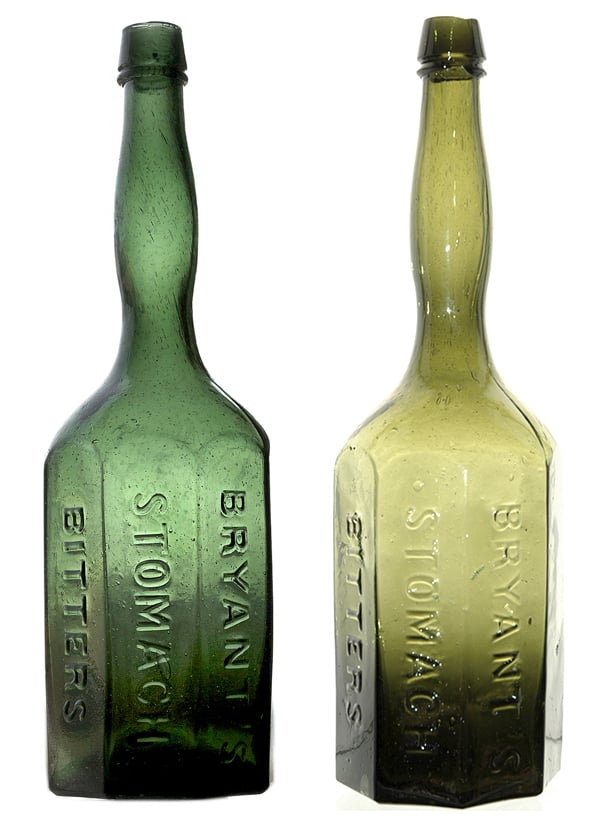 The emerald green Bryant’s Stomach Bitters (left) in a lady’s leg form is quite extraordinary as the bottles are typically in an yellow olive coloration. This is an unlisted color. This beauty was represented in the Glass Works Auctions – Auction #128. Purchased from Don Wease at the Baton Rouge bottle show in 1972. It was found by Lucius Yaun in a hollow log at Port Hudson. Sidney Genius Collection.

Ferdinand Meyer V is a native of Baltimore, Maryland and has a BFA in Fine Art and Graphic Design from the Kansas City Art Institute and School of Design. Ferdinand is the founding Principal of FMG Design, a nationally recognized design consultation firm. Ferdinand is a passionate collector of American historical glass specializing in bitters bottles, color runs and related classic figural bottles. He is married to Elizabeth Jane Meyer and lives in Houston, Texas with their daughter and three wonderful grandchildren. The Meyers are also very involved in Quarter Horses, antiques and early United States postage stamps. Ferdinand is the past 6-year President of the Federation of Historical Bottle Collectors and is one of the founding members of the FOHBC Virtual Museum.
View all posts by Ferdinand Meyer V →
This entry was posted in Advertising, Bitters, Digging and Finding, Figural Bottles, History, Medicines & Cures and tagged American Bottle Auctions, bitters, bryant's stomach bitters, california, cone, Downieville, Ferdinand Meyer V, G.N.W. Bryant, Jeff Wichmann, Meyer Collection, Robert Frank, San Francisco, Western Bitters News, William Newell & Co.. Bookmark the permalink.