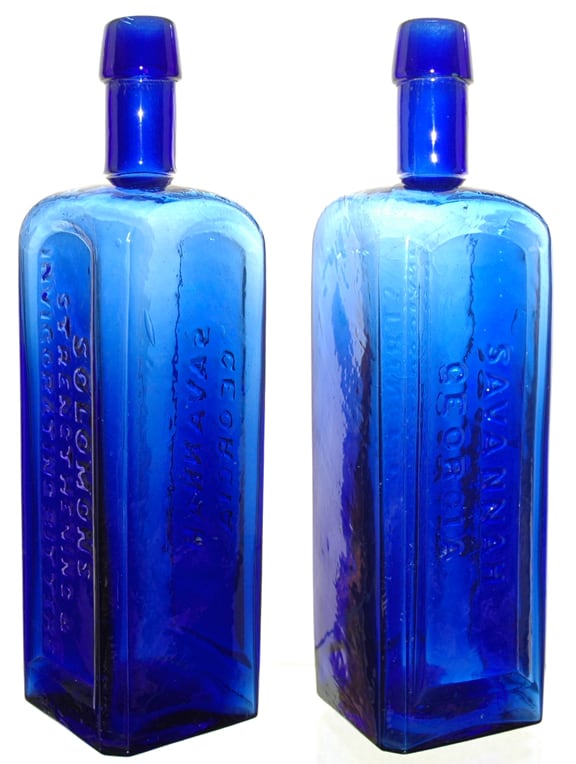 Sometimes I have bottle posts that take a longer and broader range approach such as the Fancy Square Series and the Figural Barrel Series etc. Other posts just announce antique glass related topics or deal with current events for bottle shows and auctions. This post today occurs because of a request or inspiration from a fellow collector. In this case, it is Charles Aprill, again. Charles and Jane Aprill are the King and Queen of Blues in the Crescent City or NOLA. Read more: The Charles & Jane Aprill Blue Gallery. 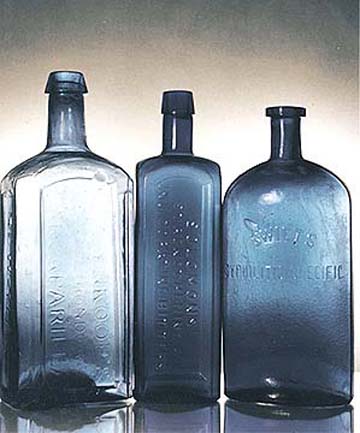 Anyway, I did a post yesterday on  Swift’s Syphilitic Specific and anchored the post with two great examples from the Aprill collection. I had included a picture of a trio of blue bottles (see above) that included a Swift’s Syphilitic Specific (SSS). Sitting to the left of the Swifts were examples of a Solomon’s Strengthening Bitters (center) and a Wynkoop’s Sarsaparilla (left). Well, Charles saw this picture and suggested a post on each, the Wynkoop’s and Solomon’s, discussing the variants for each. So here we go. Let’s do the Solomon’s first.

Any bitters collector who is worth his salt, will own a Solomon’s. Why you ask? Because they are usually cobalt blue and are from the South! A near perfect one, with no issues, will usually sell for around a grand. Lately these costs have been rising due to the resurgence of collecting squares and of course, color. You have to watch out though, and try to avoid an example that has been dug and overly cleaned. For some reason, the soil in the South is not agreeable to this bottle.

I was able to pick up a great example for my collection of the S 140 variant in 2002 in a private purchase from a fellow with the handle of MedFlask on eBay. This bottle did not sell for the reserve so I contacted him and bought, I believe, three bitters bottles. This was near the time I started collecting bitters bottles.

Pictured below you will find examples from the Aprill Collection (both variants), an example from my collection and some related collateral material I was able to pull together. As usual, this is a living post and I welcome additional information and images. 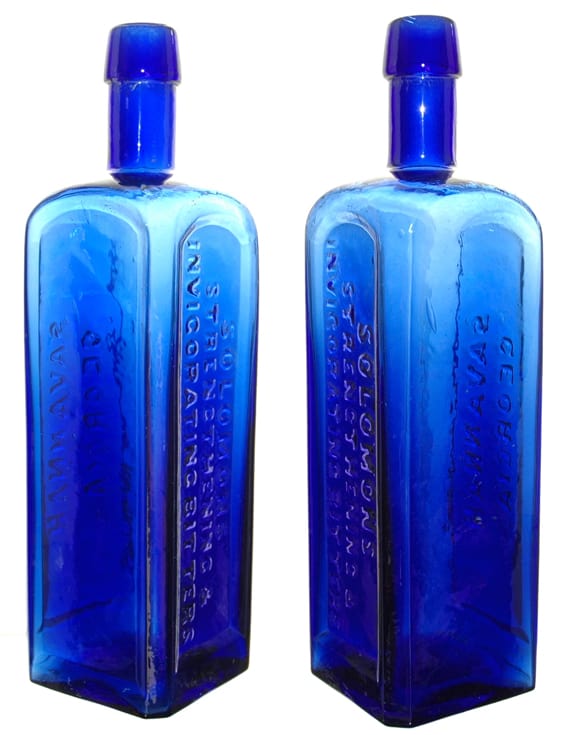 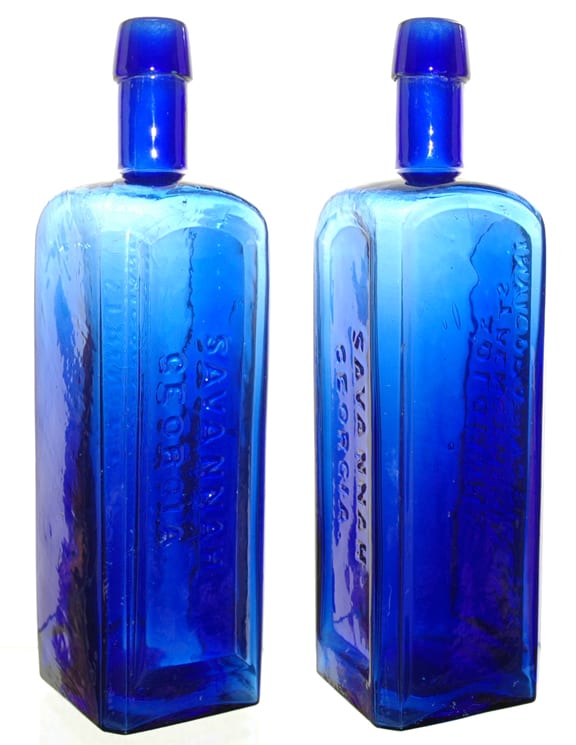 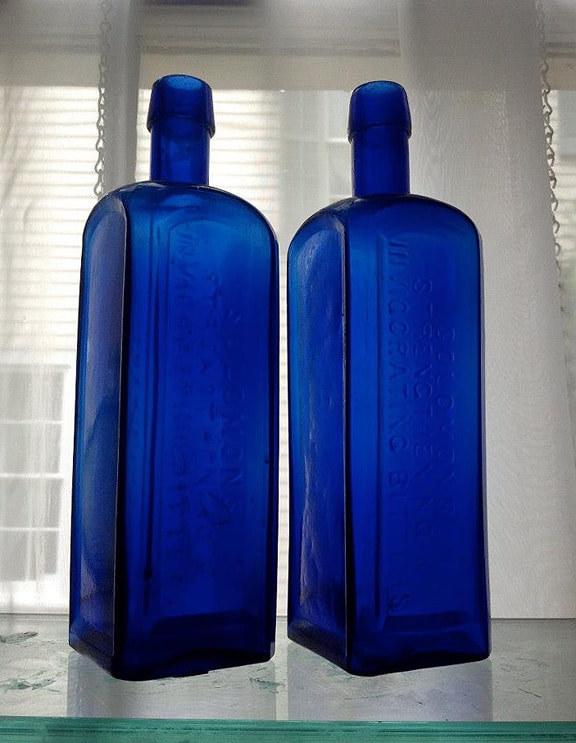 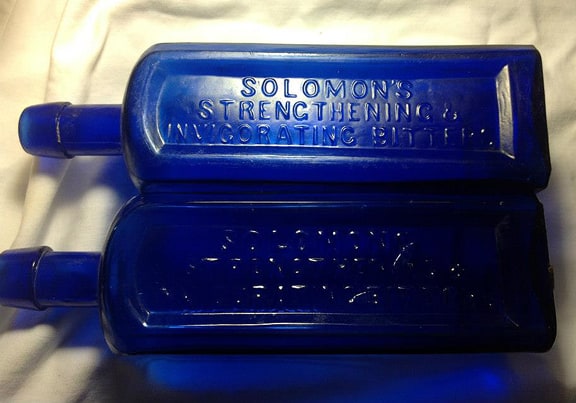 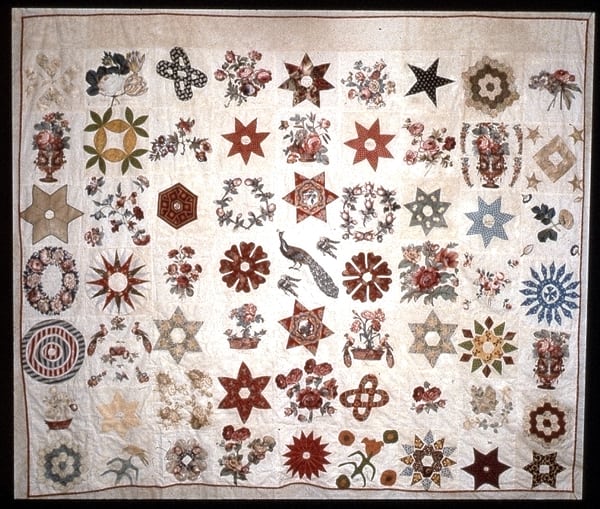 The Solomons Company was one of the oldest and most highly honored institutions in Savannah and certainly south Georgia. Their robust business was conducted throughout the eastern United States for well over a century. The family has an interesting history which I will try to capture here as every bottle has a story. Like the Solomons family Album Quilt pictured above, there are a lot of parts to their success.

The Solomons Company was founded in 1845 by Abraham Alexander Solomons, a life-long apothecary and druggist. Abraham was born on May 2, 1816 in Georgetown, South Carolina. His father was Israel Solomons (1770–1830) and his mother was Eleanor Joseph Solomons (1795–1856). Their children were Moses Joseph, Lizar Joseph, Abraham Alexander, Mordecai, Sarah Judith, Judah Joseph and Joseph M. Solomons, who would eventually join Abraham in business. You can see the Solomons brothers and sisters in the portrait photograph below. 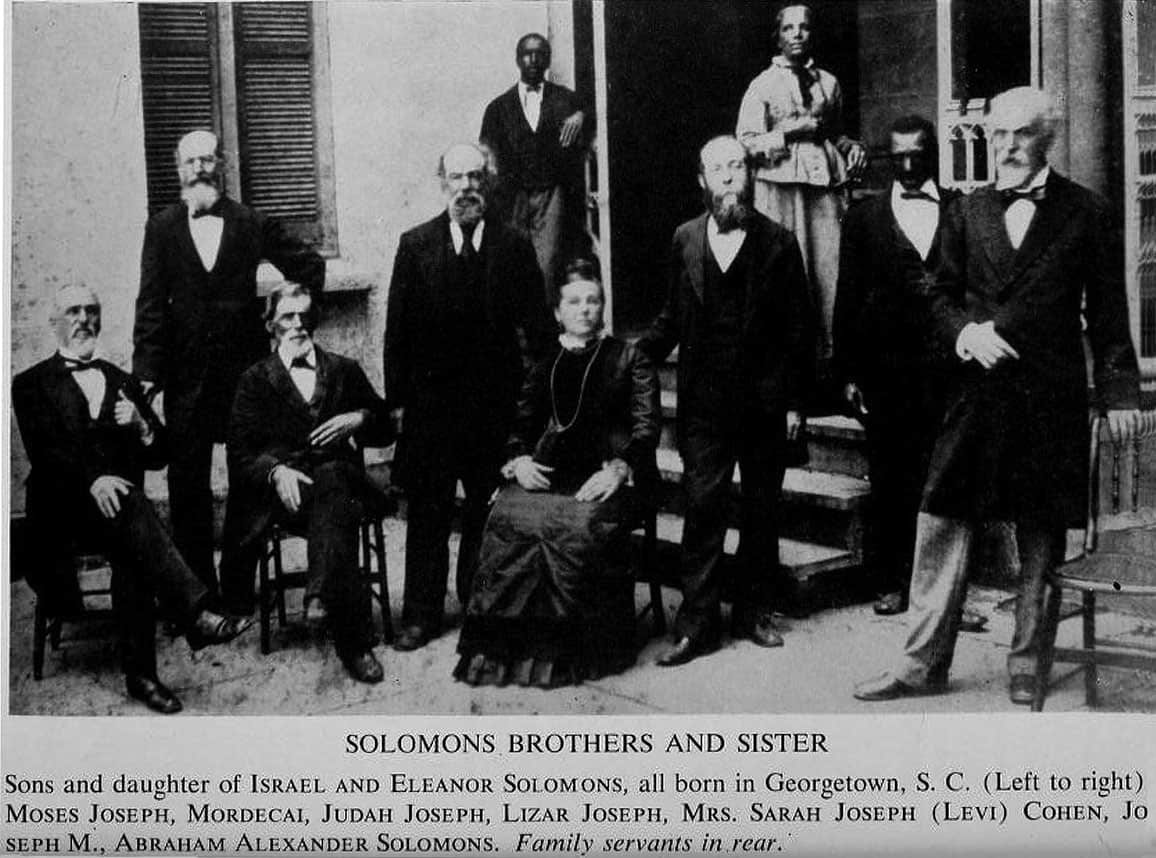 Israel Solomons was born in Amsterdam, Holland where his last name was van Blitz. He changed it to Solomons when he came to America where he established himself as a successful merchant in Georgetown, South Carolina. Georgetown is the third oldest city in South Carolina, following Charleston and Beaufort and was founded in 1729. It became an official port of entry in 1732. Prior to this, all foreign exports and imports had to pass through Charleston. Duties and the added freight had to be paid there. With the designation of Georgetown as a port of entry, the area’s merchants and planters could deal directly with all ports, bypassing Charleston. Israel Solomons would die on August 10, 1830 in Georgetown at the age of sixty, and was buried in the Jewish Cemetery.

Abraham A. Solomons married Cecelia Moses (1815–1882) on December 6, 1843 in Charleston, South Carolina. She was the sister of Sarah Moses, daughter of Isaiah Moses and Rebecca Phillips and was born in Charleston on July 18, 1815. Cecelia was noted as a woman of fine judgment and strong character. A strict but loving disciplinarian. She had eight children, three sons and five daughters, Israel, Abraham Alexander, Gertrude Moses, Rebecca Ella, Israella, Isaiah Abraham, and Louise Freighley. Israel, Abraham, Gertrude and Louise died in childhood. Only three lived to majority, Rebecca, Isaiah, and Israella. Isaiah would eventually join the Solomons drug company.

Abraham served the usual apprenticeship and clerking jobs prior to obtaining his license by the Medical Society of South Carolina to run an apothecary on December 15, 1835. This license stated that Abraham A. Solomons had studied in Charleston and proved his qualifications to “carry on the business of Apothecary and Druggist in all of their branches in the State of South Carolina.”

Abraham’s father Israel had died when he was fourteen years old which threw many family responsibilities upon himself and his mother. With a strong work ethic and determination, Abraham first opened an apothecary shop in Savannah at Whitaker Street and Bay Lane in 1845 with his brothers, Joseph M. and Moses J. Solomons. The new company, A. A. Solomons and Company, like most druggists at that time, manufactured most of their drugs and medicines from crude vegetables and plants of the region and imported drugs from other companies. With success, the company began to supply other drug stores and establishments eventually going into the wholesale drug business.

Abraham and his wife, Cecelia, and their children lived near Pulaski Square in downtown Savannah when the Civil War began. At that time, Abraham was in business with his younger brother Joseph. They were now established wholesale and retail druggists, and manufacturers of proprietary articles and were located at 167 Congress Street.

On account of his age and calling, Abraham did not serve directly in the field for the Confederate States but served as a Captain of the Home Guards. He was quartered inside his 165 Charlton Street address during the occupation by Sherman’s army as his family fled. When Fort Pulaski fell, little Rebecca Solomons recalled that it “meant the fall of Savannah. So all who could, left the city, our family amongst the refugees.” The Solomons fled to Columbus, Georgia where Mrs. Solomons sister Sarah Alexander and her brother Isaac and Ezra Moses lived. Joseph volunteered for Company C (Republican Blues), 1st (Olmstead’s) Georgia. As an apothecary, he was appointed acting assistant surgeon.

Please prepare for me the enclosed prescriptions and return them with the medicine and oblige, Yours, Robert E. Lee.

Two notable patrons of the Solomons drug business were noted in Solomons advertising and documents. You have to take these types of testimonials with a grain of salt. The first occurred on August 24, 1869 when Alexander H. Stephens, Vice President of the Confederacy wrote: “Gentlemen – Please send me half a dozen bottles of your bitters. I have been using them lately upon the recommendation of a friend, with decided benefit, in giving tone to the digestive organs and general strength to my system. Send by Express with value endorsed, C.O.D.” The second occurred on April 10, 1870 when General Robert E. Lee, on a visit to Savannah, addressed a communication to the company as follows, “Messrs. A.A Solomons & Co.: Please prepare for me the enclosed prescription and return them with the medicine and oblige, Yours, R. E. Lee.”

These endorsements fit in nicely to when Solomons Strengthening & Invigorating Bitters bottles were made which was from 1869 to 1871. At least that was when they were advertised. It was also called The Regulator of the Liver and Stomach and the Best Tonic of the Age. It certainly their biggest seller and signature brand during those years. 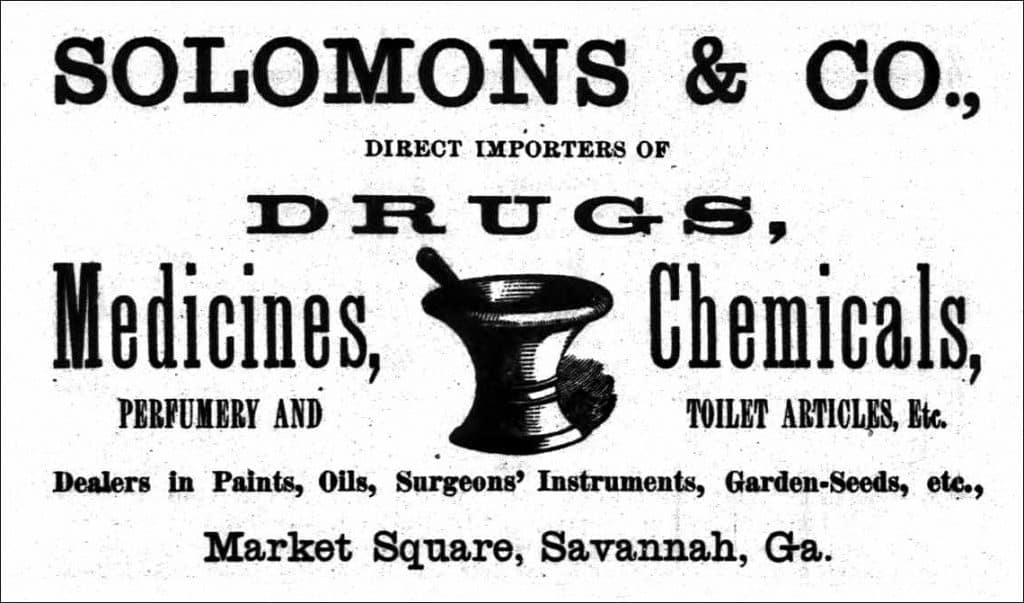 For many years, A. A. Solomons and his brothers, Lizar, Joseph M. and Moses J. were among the most prominent and popular citizens of Savannah, particularly Joseph M. who had served in 1864 on the staff of General Joseph E. Johnston in the campaign from Dalton to Atlanta and might be said to have been a prime favorite of the City until his death at the age of 96.

Abraham A. Solomons was a life long member of the Congregation Mickve Israel of Savannah and a member of the Benevolent Association of Savannah, a society whose members were pledged to remain in Savannah to assist the sick and bury the dead during yellow fever epidemics—a deadly and constant menace until the discovery of its control. 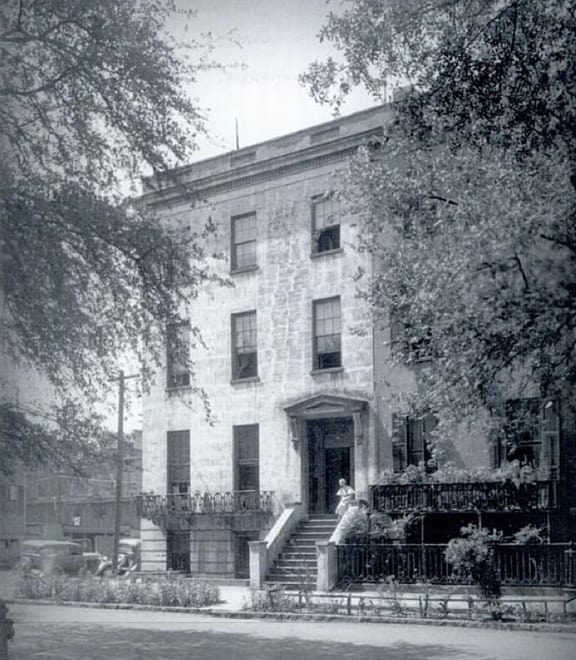 On December 6, 1899, Abraham A. Solomons died in his residence at 165 Charlton Street in Savannah that faced Pulaski Square. Their drug business would certainly continue. Over the years the Presidents of the Solomons drug business was as follows:

Since 1913, their drugstore was located at 337 Bull Street in Savannah, Georgia. Over the years, this drugstore evolved into a wholesale and retail seller of prescription drugs, had a soda fountain, and an ice cream parlor. It was one of the oldest drugstores in the country until its closure in 1981. 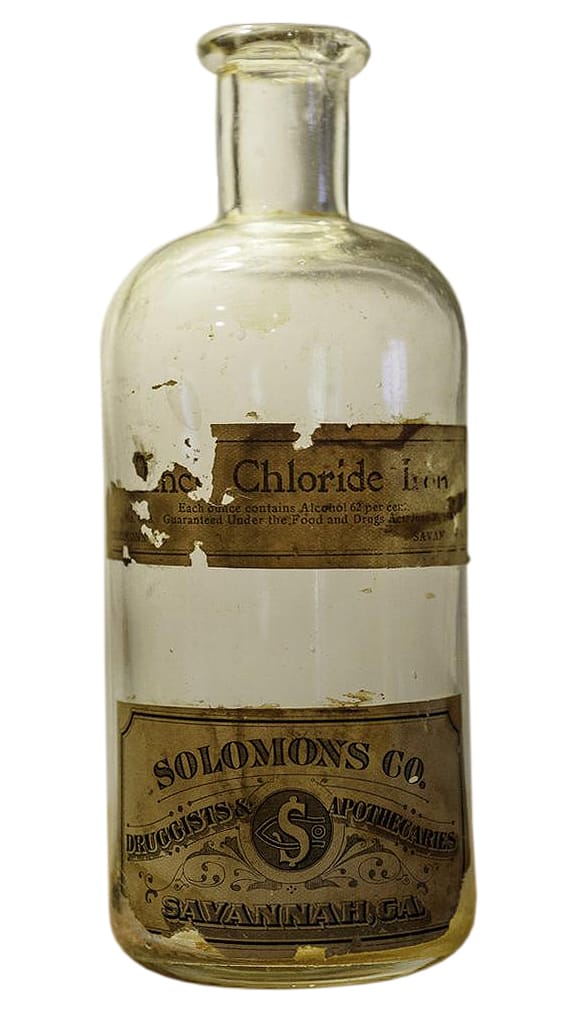 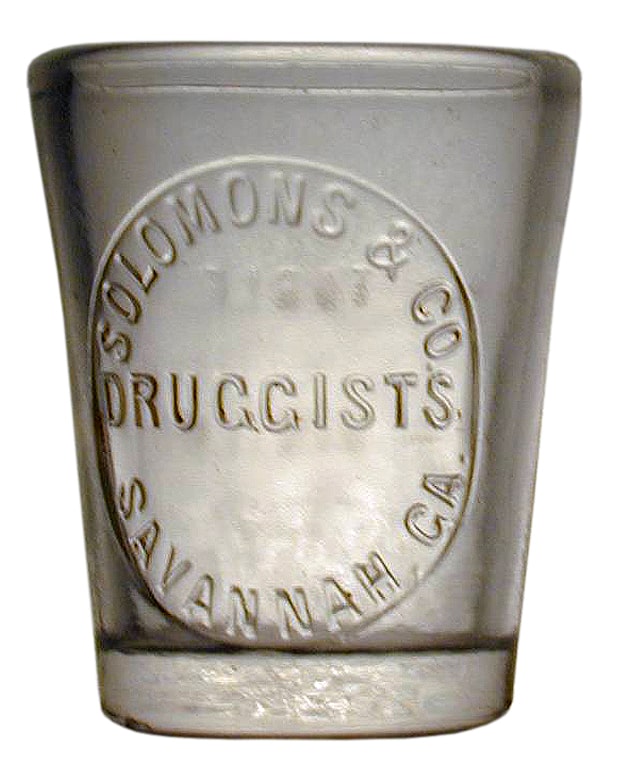 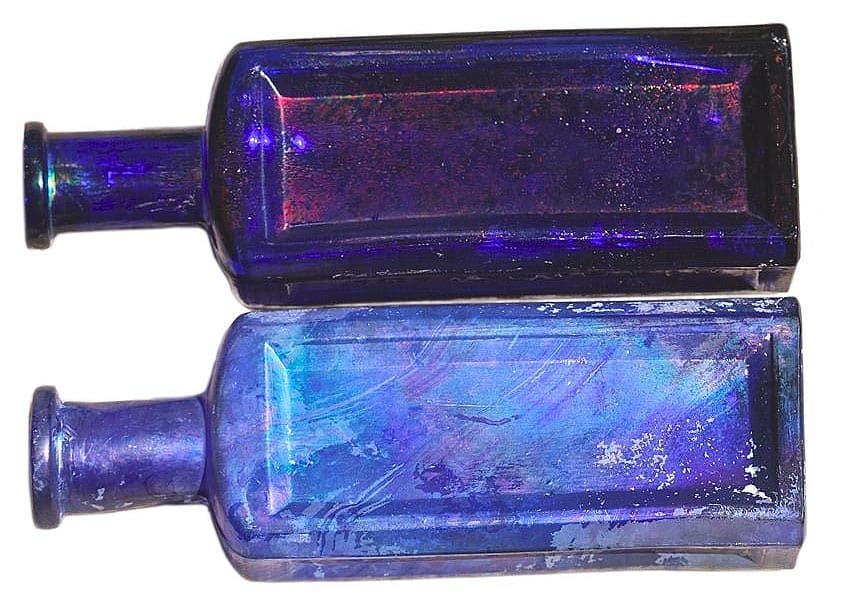 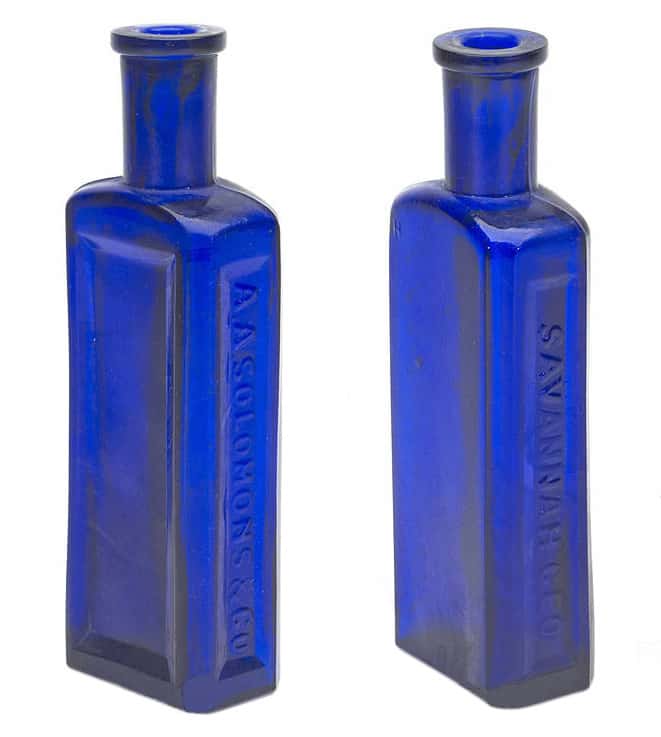 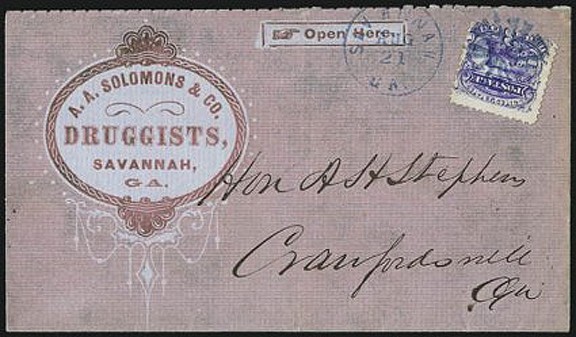 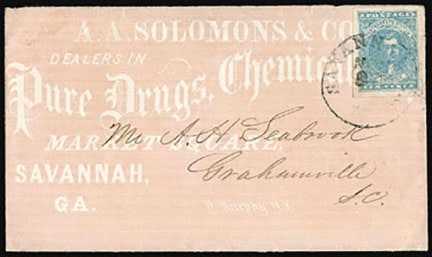 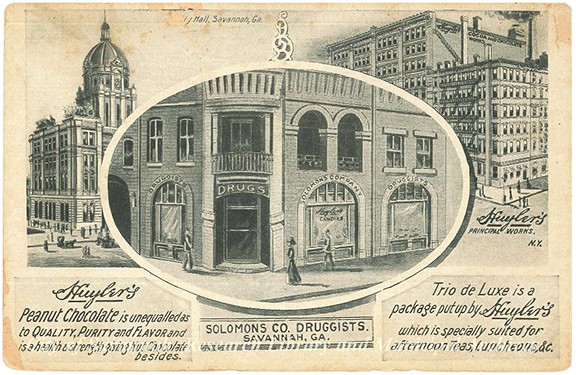 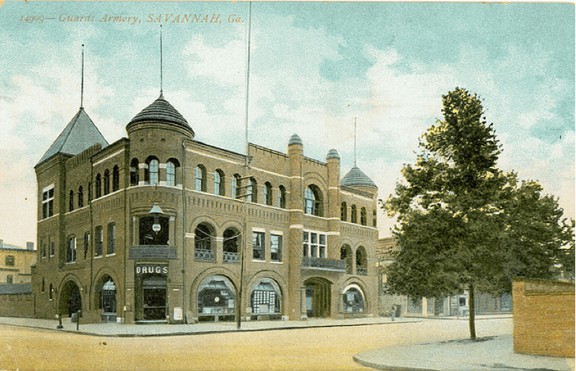 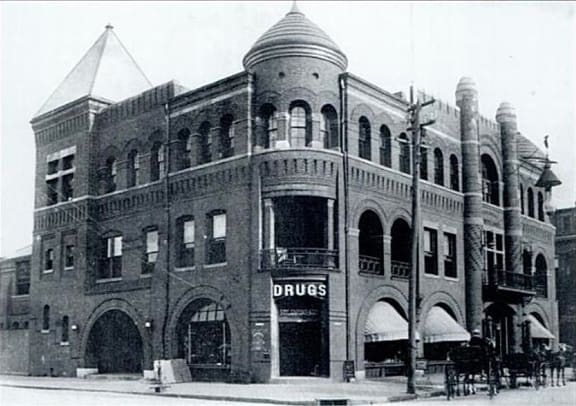 Solomon’s Drug Store is apparent in this turn of the century photograph of Potter Hall in horse and buggy days. – Georgia Historical Society 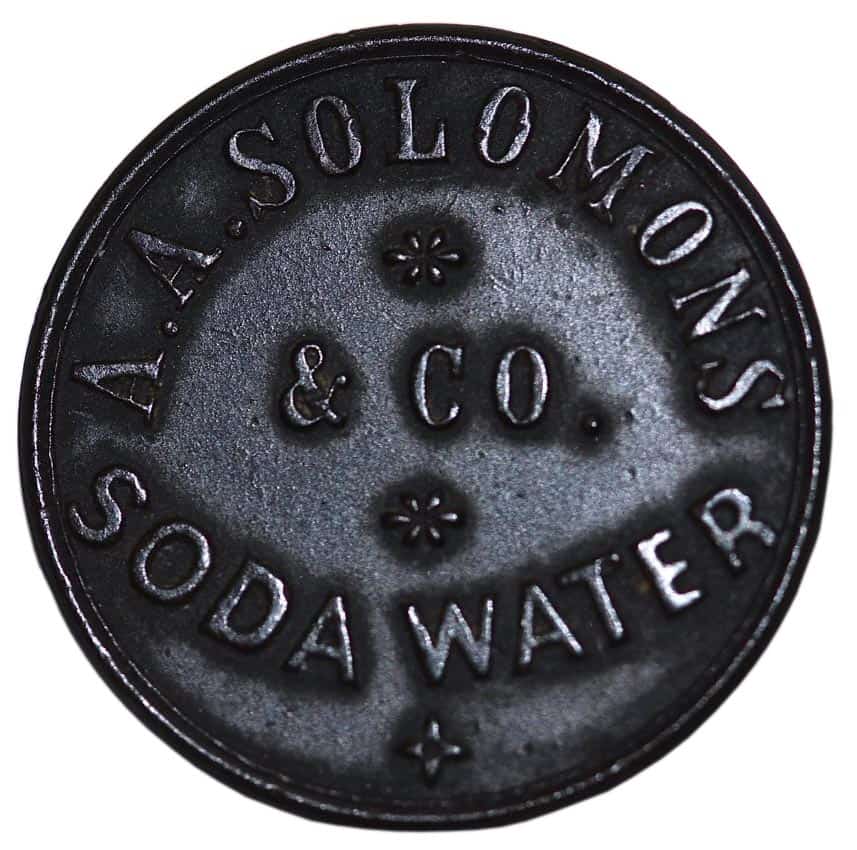 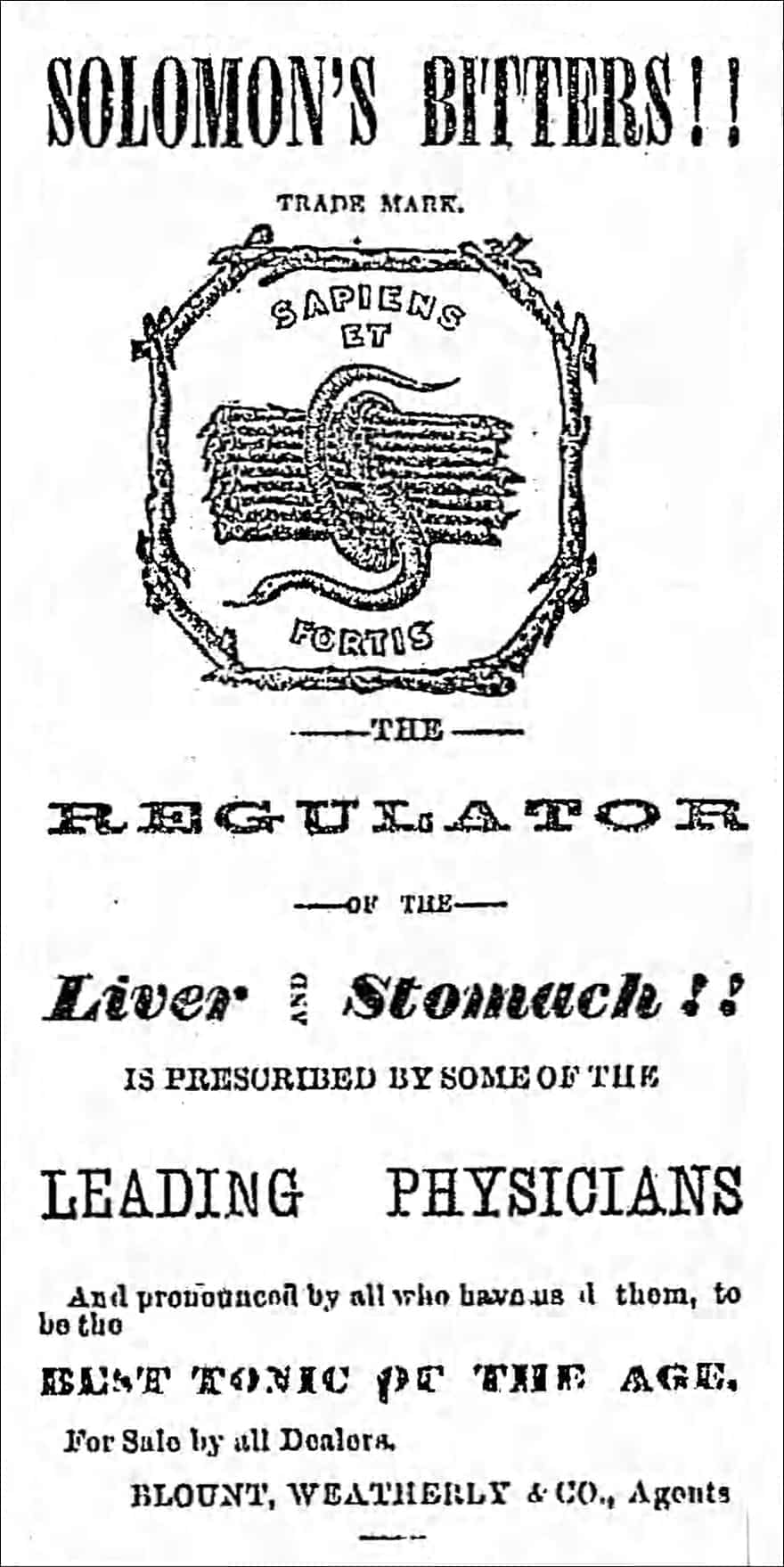 Solomon’s Bitters !!, The Regulator of the Liver and Stomach – The Montgomery Advertiser, Friday, May 6, 1870 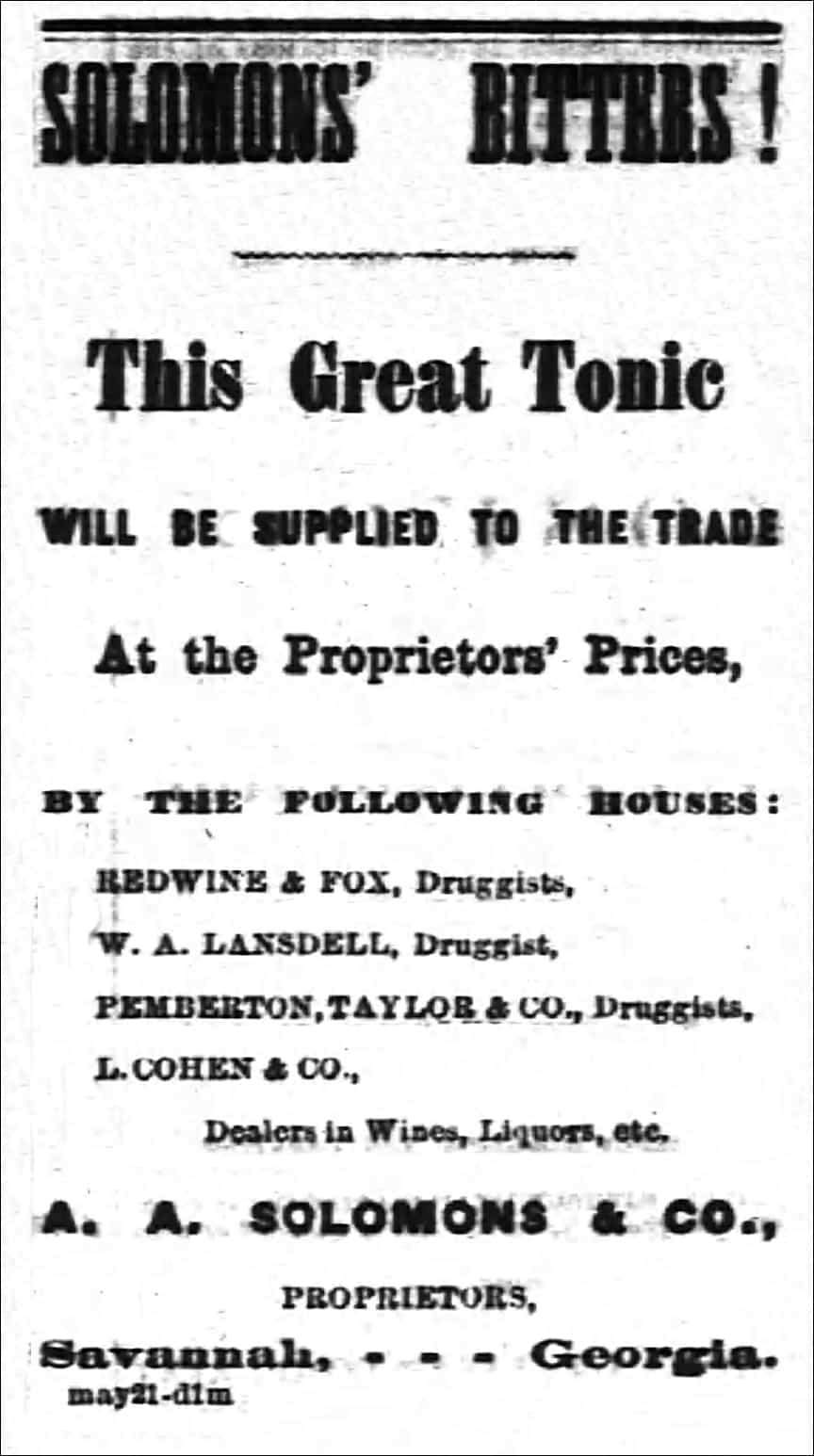 1870: Newspaper advertisement (above in post) Note From Lee – The Atlanta Constitution, Monday, September 10, 1934 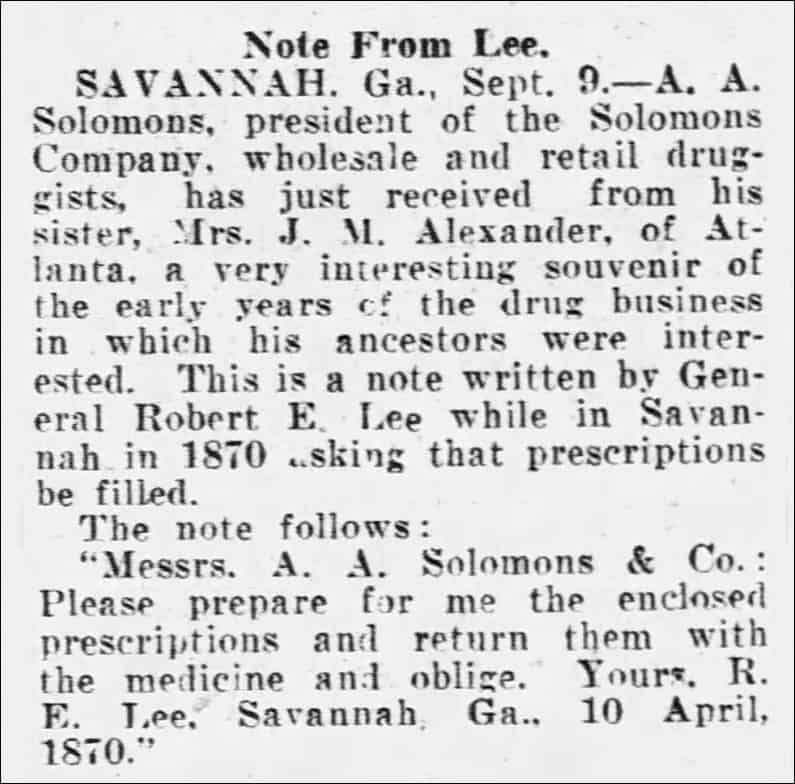