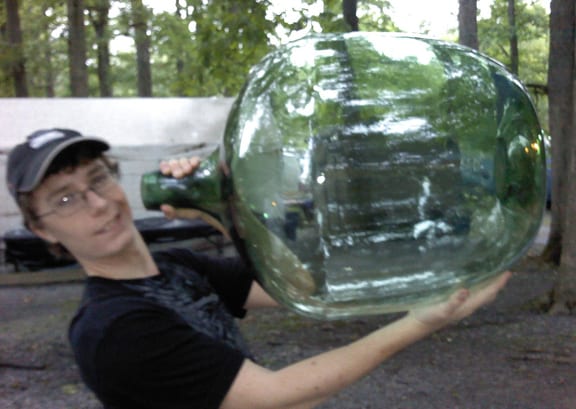 Those are all cool!!! but I’m saddened by the fact that you didn’t mention any NYC stuff, there are some amazing embossing on blobs, Olbermeyer and Liebmann, Easter Brewing Co, John Kress Brewing Co, Defender Bottling Co, Jos. Strohmenger / Fred Opperman Jr. Turtle Bay Brewery Lagar Beer. and an NJ, Feigenspan Brewing Co. I though for sure one of them would be on the list, the Olbermeyer usually is. Michael Urbanski

Don’t be sad. Just send me pictures like most are doing. Agree for sure that I am weak in beers unless Rick DeMarsh or others jump in. These posts are numbered so let’s do beers next. Tks

They are all here on my website:  Mike’s Bottle Room

I got to looking at Michael’s web site and realized that this guy is a pretty talented digger who seems really ahead of the curve regarding finding, collecting, photographing and posting about primarily New York blob top beers. His web site is organized, visually attractive and covers historically the areas of New York City such as Manhattan, Brooklyn, Queens, Staten Island, Coney Island etc. Michael’s home page reads as follows:

For those of you who don’t know who I am, my name is Mike AKA Chinchillaman1. I’m a Youtube Bottle Digger so to speak which means that I collect bottles and post the videos of various digs or elements of my collection onto Youtube. This site is for those who want to get into the hobby of bottle hunting, metal detecting or any treasure hunting hobby in general, or for those who want to find out about the history of bottles that they might already own. Ive been a collector for two years and my goal is to find out about the histories of all of the bottles that I have, local especially. If you’d like to view my bottle digging channel here is the link: http://www.youtube.com/chinchillaman1

If You Have Any Information On The Bottles Marked, No Info, Please Send Me An Email. I Am Looking For The History Of The Companies Specifically. Thank You!

A few of my favorite bottles after perusing his site, which he says he has more bottles to add: 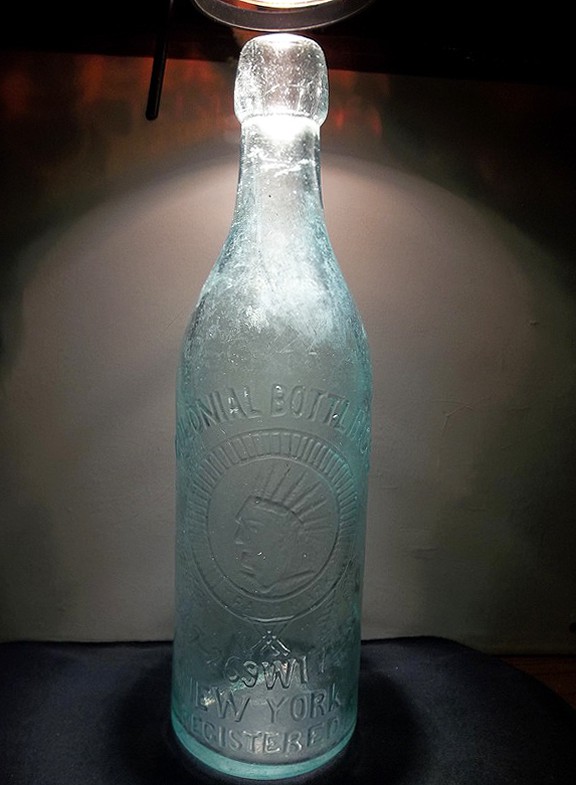 COLONIAL BOTTLING CO. / COLONIAL BREWING, NY Blob, Address: 267-269 W. 17th St., This is one of the rarest bottles in my collection. Not only is it extremely scarce, it is also a prototype with multiple mistakes. This will get a little complicated: The Colonial Brewery opened in 1897, successors to the Bavarian Star Brewing Co of 1891-1897, at 240 W. 18th st. It closed in 1899, and the brewery was sold to the Eastern Brewing Co. as the Colonial Branch. The Eastern Brewing Co. was based in Brooklyn and this Manhattan branch was only in operation from 1901-1902. This bottle however, is a prototype, it says Colonial Bottling Co. instead of Colonial Brewery, and the address is incorrect as well, probably because the building for the company wasnt purchased yet. There is no record of the prototype anywhere. The design around the Indian trademark is also incorrect. – Urbanski Collection 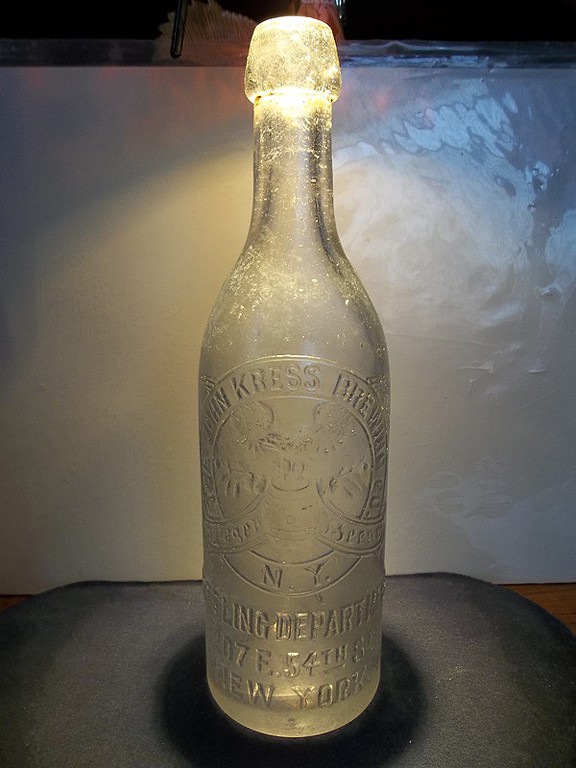 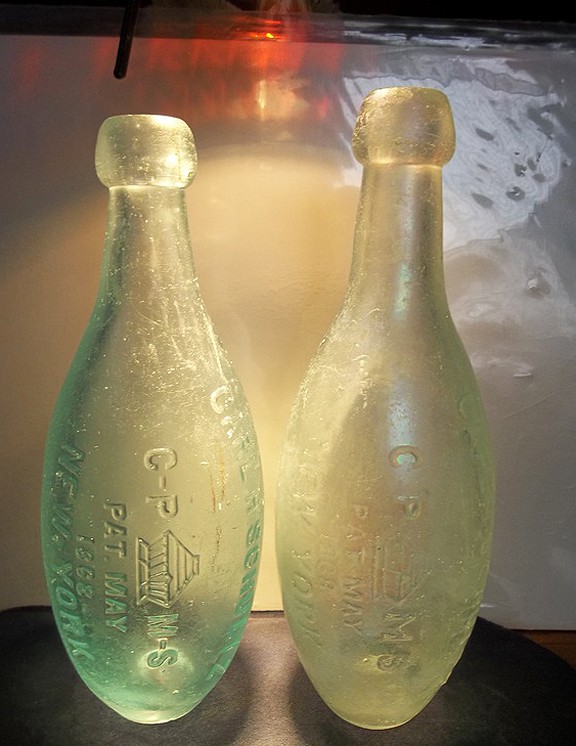 CARL H. SCHULTZ, NEW YORK, NY Vichy Water, Address: 430-444 1st Ave., In 1862, young German Carl Schultz was reselling mineral water in New York City which was being imported from France, more specifically Vichy water from a special area. By 1868 he was sued by the French over copyrights on label titles using the word Vichy in it and for reselling their spring water. He then decided to make his own Vichy water and the company was born the same year. By the late 1890s millions of bottles and siphons were being produced and distributed. By that time he began to lose money as it cost more to make the bottles and siphons then he had earned selling the drink. He died on May 29 1897 from Pneumonia, leaving his family in debt to pay back for the bottles. The company immediately closed that same year. – Urbanski Collection 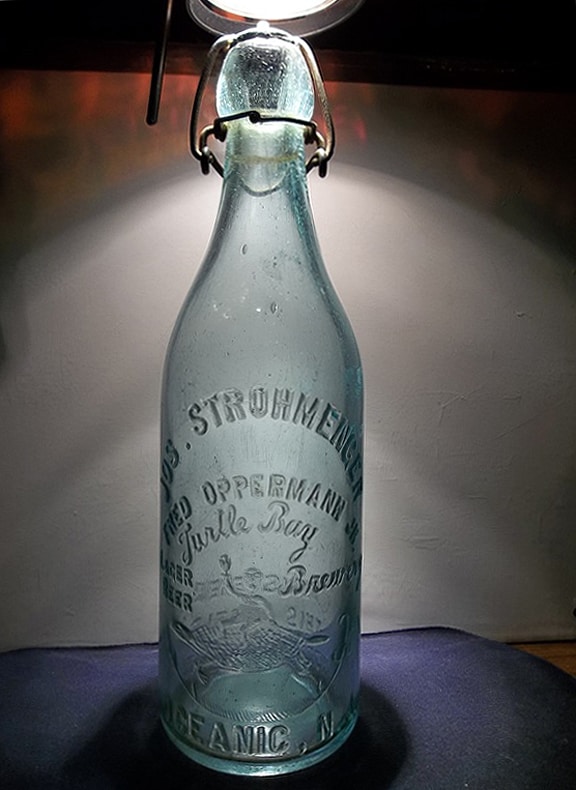 JOS. STROHMENGER / FRED OPPERMAN JR. TURTLE BAY BREWERY LAGAR BEER, Address: 322 E. 45th St. & 785 1st Ave. E. 44th St. This bottle is from Oceanic NJ, but was brewed and made in Manhattan. The company started in 1850. Its first official address was at 320 E. 46th St. under the name J.G. Gillig and Fred Oppermann. In 1876 the name changed to Oppermann & Mueller. The address changed as well to 44th & 45th St., Between 1st & 2nd Ave. In 1878 the company changed its name again to Frederick Oppermann Jr. Brewing Co. in 1892 the company was bough tout by the Conville Brewing Co. until it closed in 1911. It is unclear how or when the company moved to N.J., nor were any dates recorded associated with the move. – Urbanski Collection 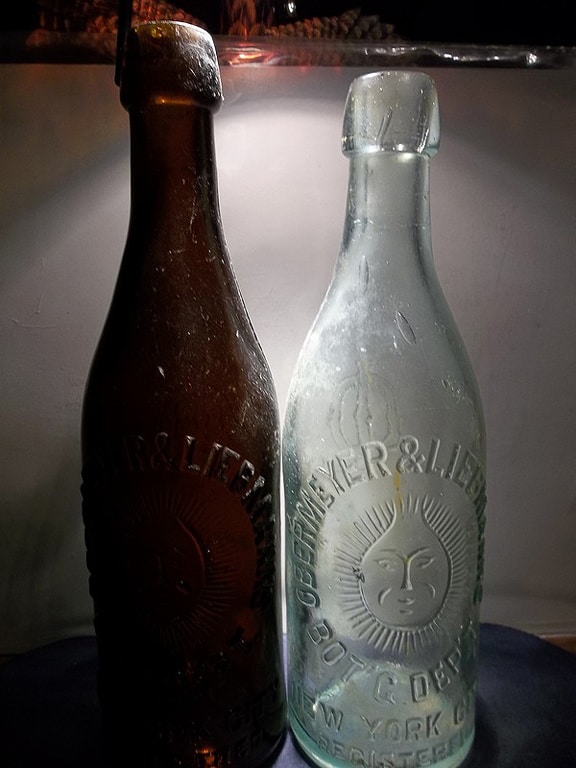 OBERMEYER & LIEBMANN, BROOKLYN Blob Top, Address: 59 & 71 Bremen St. & Noll St. On November 27th 1854, a German immigrant named Samuel Liebmann purchased a brewery in Williamsburg which would become the greatest brewery in New York over the course of the next 100 years. In 1868 he retired, and in 1872 he passed away, leaving the business to his three sons, Joseph, Henry, and Charles. It is unclear which of the sons branched off to create the S. Liebmann’s Sons Brewing Co. The company was successful until 1905, when it was passed down to their grandsons. To this day, no one is sure where the name Obermeyer comes from in the companie’s history. – Urbanski Collection 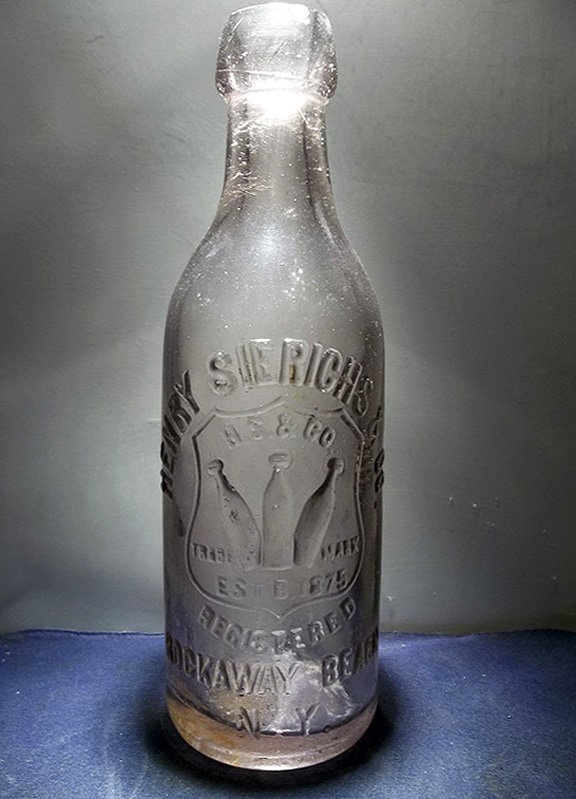 HENRY SIERICHS & CO. / Queens, Small Blob Top, Address: 159 Elizabeth St., The company opened in 1875 in Manhattan and close in 1917 in Queens. This bottler was a member of the Rockaway Bottlers Protective Association of Rockaway Beach, NY. – Urbanski Collection 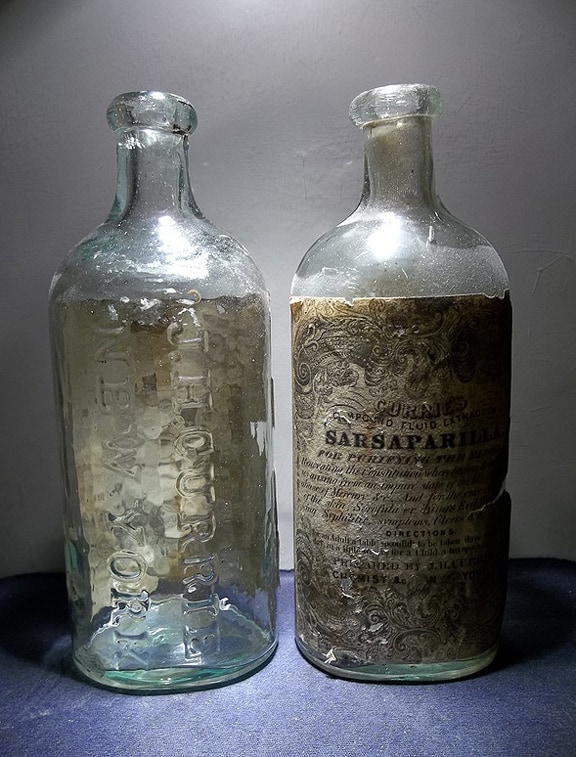