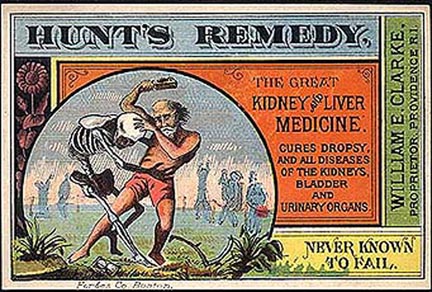 One of the really great advertising graphics that you will find relating to medicines, cures and the bottles that we collect is the Hunt’s Remedy. The symbolic skeleton, scythe, hour glass and patient using a bottle of Hunt’s Remedy to beat away death is outstanding.

Hunt’s Remedy – the Great Kidney Medicine dated back to the very early days of Manhattan, and was manufactured for some time before William E. Clarke of Providence came into possession of it in 1872. Clarke subsequently added Health Pills and Liver Cure, as well as Hunt’s Infallible Eye-Wash, to his products. The three-cent private die stamps were issued briefly in 1880. Only 9,000 were printed, on watermarked paper (see picture below). 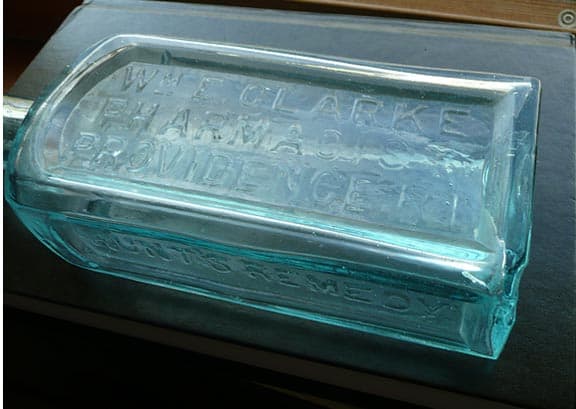 On advertising pieces, trade cards, revenue stamps and other ephemera you will see patient beating off death with a bottle of Hunt’s Remedy. Mr. Hunt was afflicted with Bright’s Disease and dropsy, and came under the care of Dr. David Hosack, a physician who practiced in the 18th century and until 1835. He and the Dutch Brevoort family believed in the curative powers of a mixture of a particular root and other vegetable substances. This remedy cured many cases of liver, kidney and bladder disease; dropsy always yielded. Or so it was claimed. 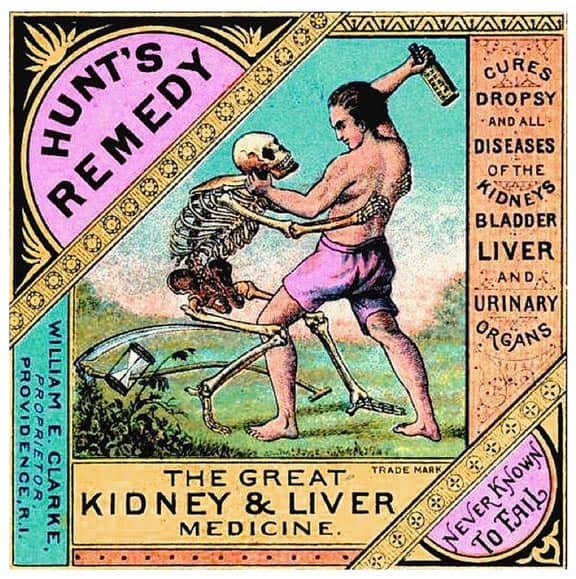 Mr. Hunt took the medicine about a year, and “his bloated flesh was reduced, and his vigor restored. He remained portly, but until he died from another disease he was well and happy.” His remedy was used by both regular and homeopathic physicians. It was perhaps New England’s most popular product.

This remedy came into the possession of William E. Clarke of Providence, RI, who trademarked the name in 1872 and advertised it for Bright’s Disease and Diabetes. It also “has cured every case of dropsy in which it has been given.”

“has cured every case of dropsy in which it has been given.”

The 3c stamp (see below) was used on a bottle which sold for 75 cents (a six cent stamp was required for the $1.50 bottle), and the bottle was a blue glass, about 17.5 cm tall and with raised letters embossed on the glass, “Hunt’s Remedy” and “William E. Clarke, Providence, R.I.” Although the product was advertised as “For sale by all druggists,” more than likely it was hawked by traveling salesmen. (source: Samford University – McWhorter School of Pharmacy in Birmingham, Alabama).

More commonly known today as edema in the United States and oedema in the United Kingdom,dropsy is the accumulation of large amounts of excess fluid below the surface of the skin or in some cavity of the body. Inflammation is often one of the underlying causes for dropsy or hydropsy and can occur just about anywhere in the body. Fortunately, the condition is treatable in most situations, unless complications from a concurrent health problem arise.

One of the leading causes of the development of dropsy has to do with the condition of the blood vessels. For example, if there is some type of obstruction in the vessels running through a leg, this will lead to a drop in the oncotic pressure with the vessel system. Fluid will begin to build up, leading to swelling in the leg and possibly the ankle. Locating and eliminating the obstruction can allow the proper amount of pressure to resume and thus alleviate the pain in the swollen region. (source – wiseGEEK) 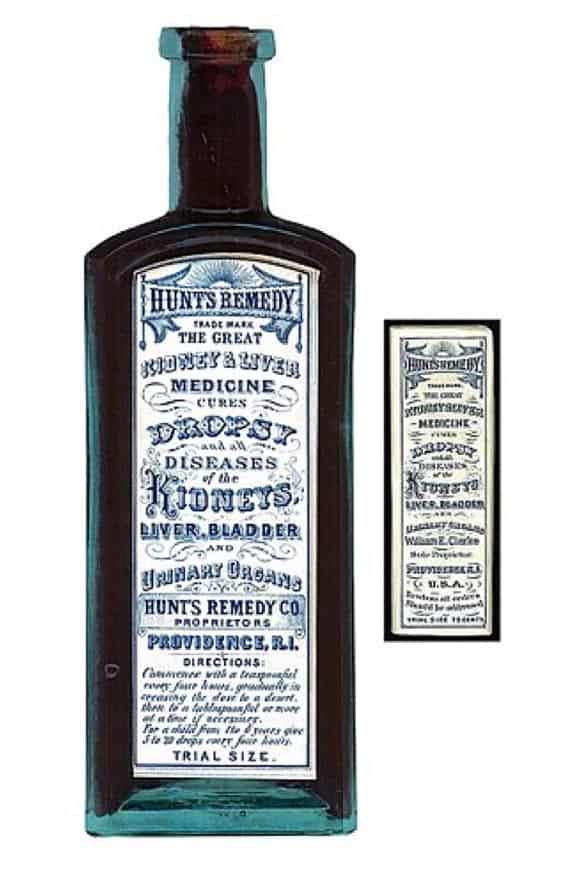 Labeled example of a Hunt's Remedy 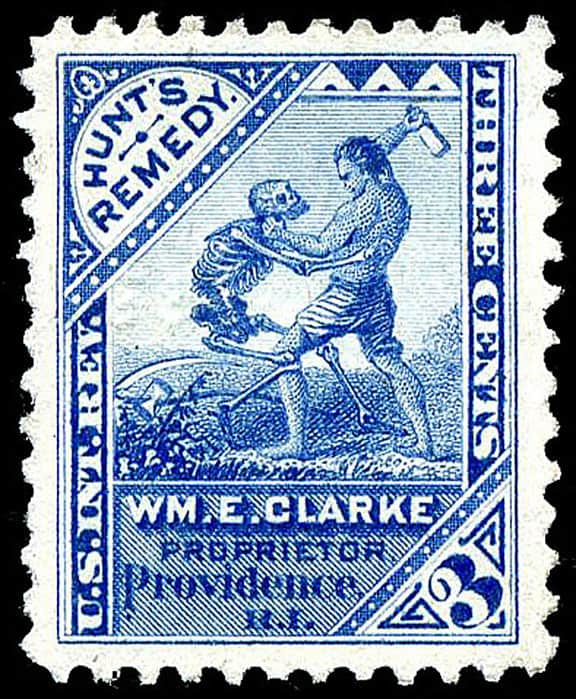 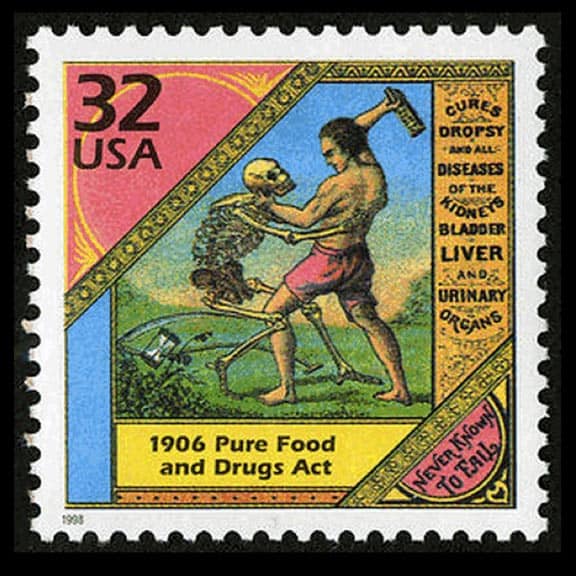 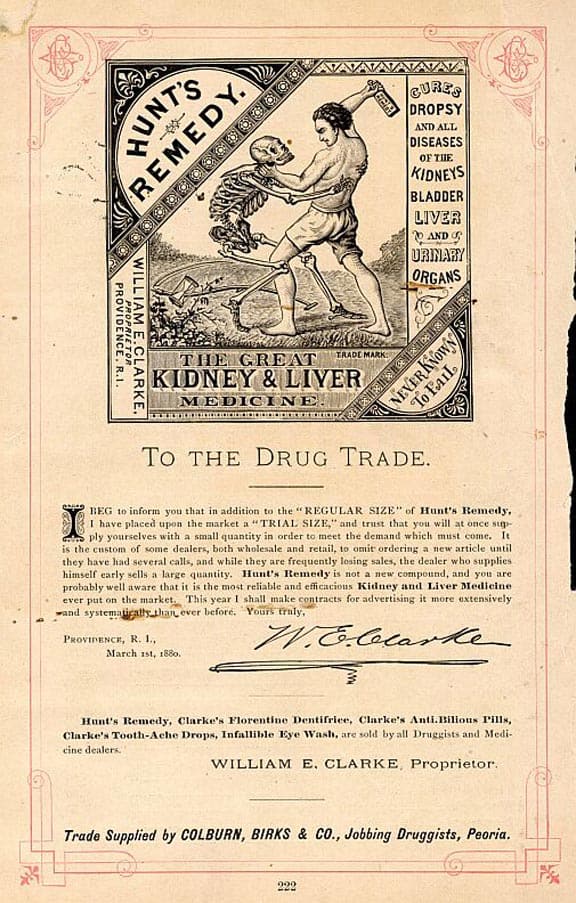 Page from a druggist's catalog dating around 1881 advertising Hunt's Remedy 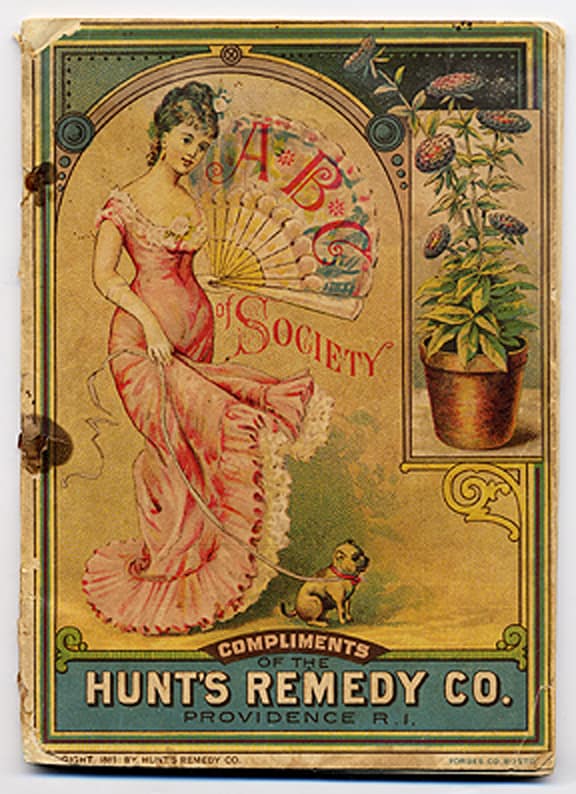 Hunt's Remedy Co. Almanac - some of the Hunt's advertising graphics did not include the skeleton graphics.

Ferdinand Meyer V is a native of Baltimore, Maryland and has a BFA in Fine Art and Graphic Design from the Kansas City Art Institute and School of Design. Ferdinand is the founding Principal of FMG Design, a nationally recognized design consultation firm. Ferdinand is a passionate collector of American historical glass specializing in bitters bottles, color runs and related classic figural bottles. He is married to Elizabeth Jane Meyer and lives in Houston, Texas with their daughter and three wonderful grandchildren. The Meyers are also very involved in Quarter Horses, antiques and early United States postage stamps. Ferdinand is the past 6-year President of the Federation of Historical Bottle Collectors and is one of the founding members of the FOHBC Virtual Museum.
View all posts by Ferdinand Meyer V →
This entry was posted in Advertising, Druggist & Drugstore, Ephemera, History, Medicines & Cures, Tax Stamps, Trade Cards and tagged Bright's disease, death, Dr. David Hosack, dropsy, Hunt's Remedy, Island, Private Die, Providence, Revenue, Rhode, skeleton, stamp, William E. Clarke. Bookmark the permalink.