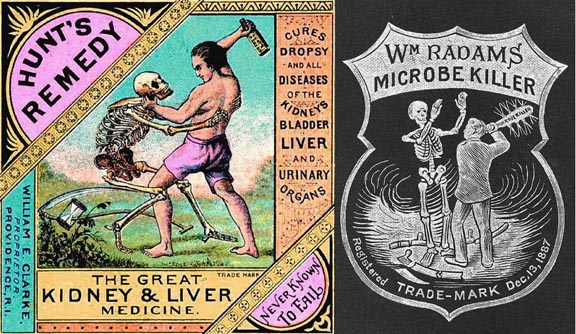 I developed a post yesterday on the wonderful graphics and associated material related to Hunts Remedy from Providence, Rhode Island. (Read: Fighting Skeleton and Beating off Death – Hunt’s Remedy). The symbolic skeleton, scythe, hour glass and patient using a bottle of Hunt’s Remedy to beat away death is outstanding. During the post I was constantly thinking of Radam’s Microbe Killer and wondering how similar the graphics were as they both used similar art (see above). 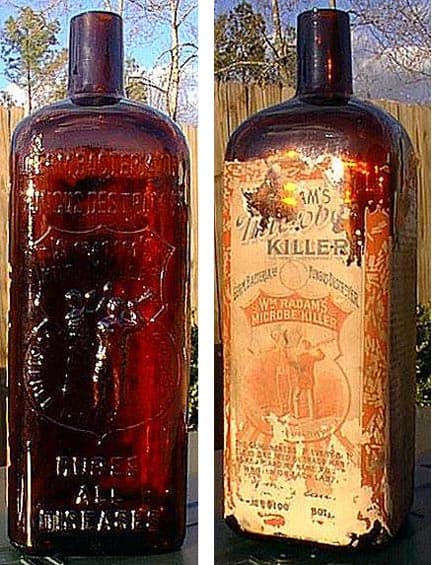 Many of us own an example of a Radam’s simply because of the pronounced embossed graphics on the bottle face (see above). If you look at the graphics, (refer to the advertising art as it is easiest to see) you will notice the absence of the hourglass and that the scythe is broken into pieces. The gentlemen is also not using a bottle to beat the skeleton as in the Hunt’s Remedy art. The Radam’s Microbe Killer art substitutes a club with the Radam’s product name written on the club side.

Mr. Radam was an interesting man as you will see and really knew how to spin a story and appeal to peoples fears. He represented quack medicine to the fullest with his outlandish boasts. I think it is interesting or alarming, depending on how you look at it, that there is very similar medicinal product advertising happening today that makes incredible promises. The only difference is a page full of small copy to warn of side effects and sometimes death…so consult your doctor first right?

The symbolic skeleton, scythe, hour glass and patient using a bottle of Hunt’s Remedy to beat away death is outstanding. 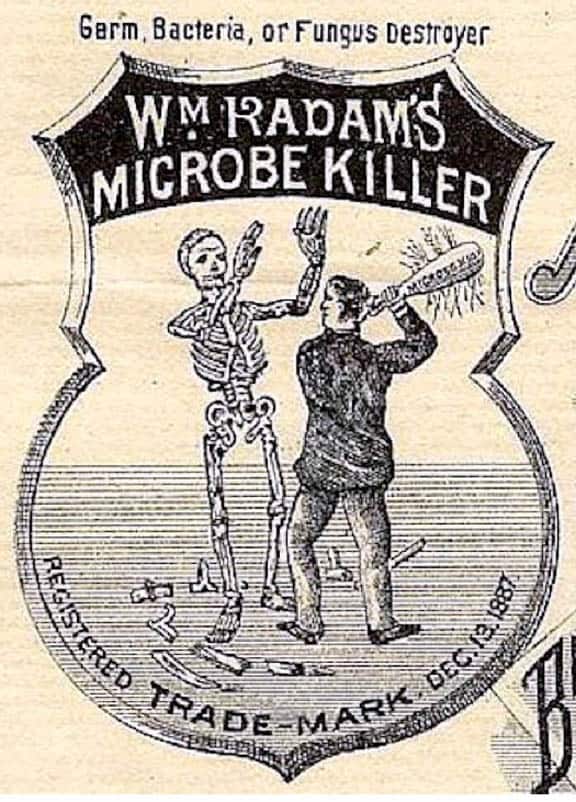 “William Radam probably perpetrated the biggest medicinal hoax of all with his celebrated Microbe Killer”. 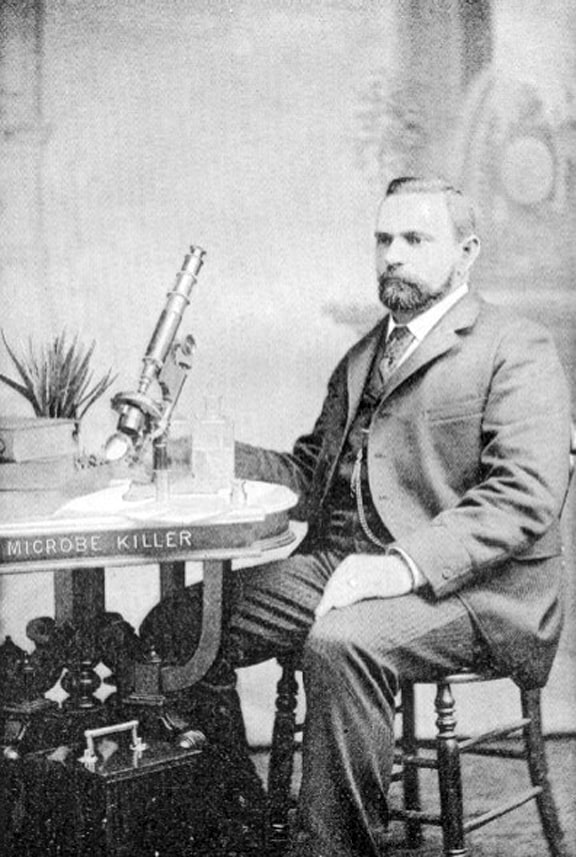 Since its annexation into the United States in 1845, Texas has provided a home to its share of medical quacks who made their living off of the desperate and the scientifically illiterate.

Of the many Texan nostrum peddlers throughout history, however, William Radam probably perpetrated the biggest medicinal hoax of all with his celebrated Microbe Killer. This elixir was even more successful because it made its debut just as the link between microbes and disease was first being documented. As science would eventually demonstrate, the Microbe Killer was absolutely worthless.

William Radam was a native of Prussia, and once served in the Prussian army; however, his first love was gardening. Radam eventually moved to Austin, Texas, and established a gardening store and nursery, tending to his 30 acres of land for nearly two decades. Then he was taken ill with malaria, and sought out doctors who prescribed various drugs for him; in his 1890 book Microbes and the Microbe Killer, Radam stated: “I swallowed the contents of bottle after bottle, until their number became too great for calculation. I took quinine until it failed to have any effect.” Rheumatism and sciatica made Radam’s life even more difficult, and then two of his own children died. At that point, the broken-hearted and ailing Radam, no longer strong enough to attend to his affairs, began his own quest to cure himself. [William Radam and the Microbe Killer]

Read Further: William Radam and the Microbe Killer – An Account of Classic Medical Quackery from the Heart of Texas by Daniel R. Barnett

Nearly all well-read people are familiar  with the scientific investigations of Profs Koch and Pasteur, respectively of Germany and France, as well as a number of other  scientists of almost equal renown, whose experiments have proven conclusively that all  diseases are causes by microbes in the blood.  They are called microbes, because they are a  living matter, and only discovered by the  aid of powerful microscopes.

But until  William Radam discovered his Microbe Killer  Medicine there was absolutely nothing  known in the annals of Medicine that would  destroy these Microbes or Germs of Diseases  existing in the blood. The Microbe Killer  does Kill the Microbes in the blood without  fail, as the thousands of testimonials we have  in our possession demonstrate.  Microbes being the cause of all diseases,  Microbe Killer will therefore cure them.

WE EXCEPT NO DISEASES WHATEVER.  Ladies and  gentlemen desiring light upon  the Microbe Theory, as well as upon any disease they may be afflicted with, are cordially  invited to call and get pamphlets for full particulars. We will forfeit $1,000 if any single  one of our testimonials can be proven as  not genuine.  RADAM’S MICROBE KILLER CO. 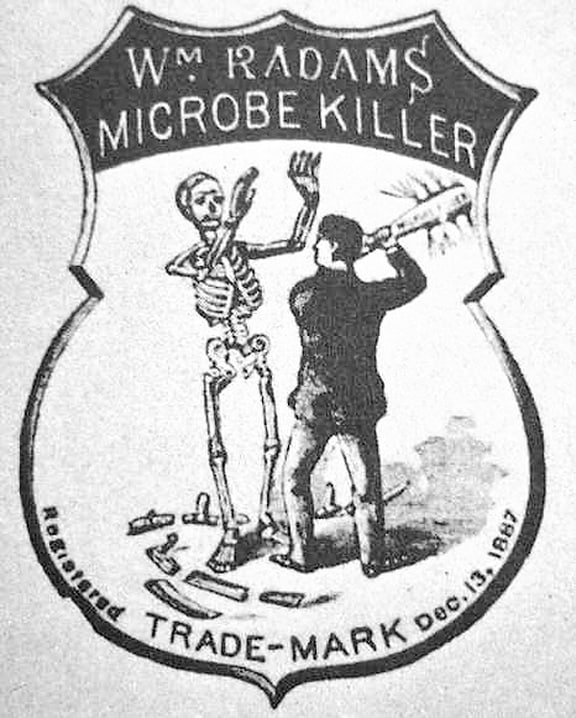 Trademark for the Radam's Microbe Killer. Note the broken scythe lying at the skeleton's feet - 6 Microbes and the Microbe Killer 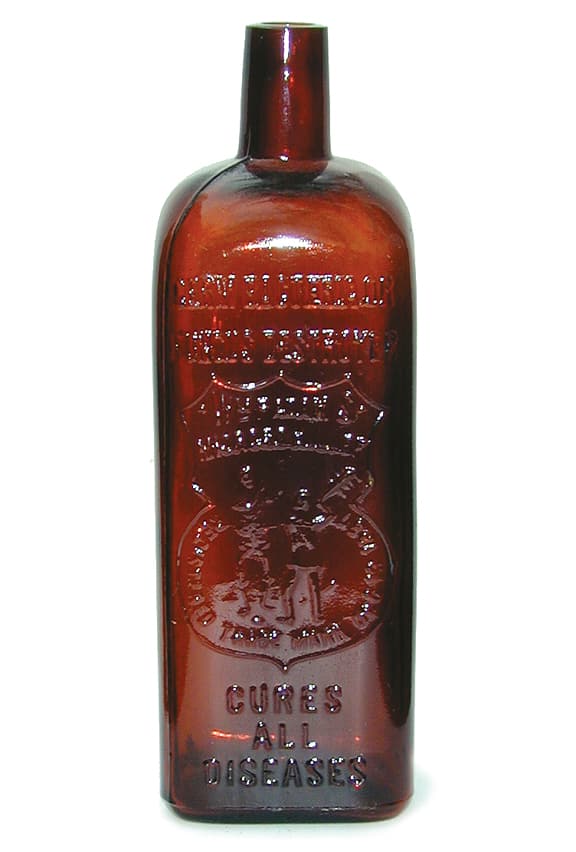 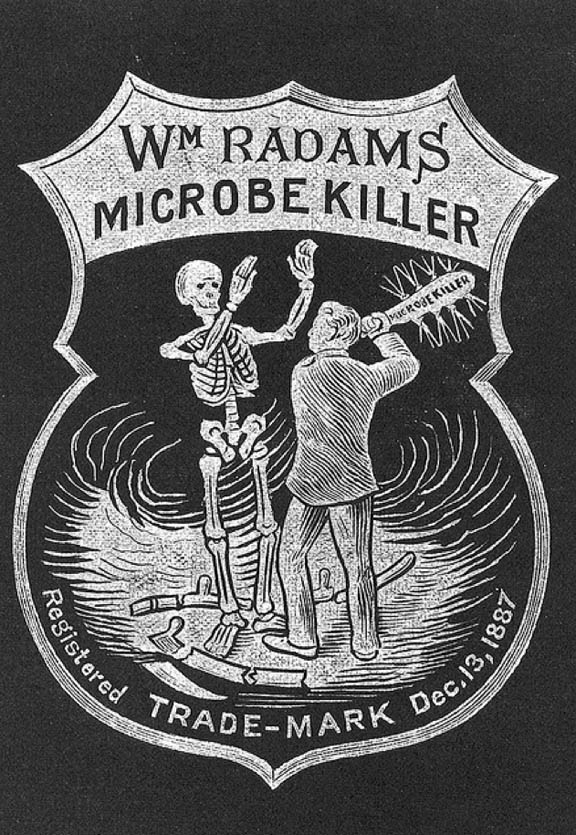 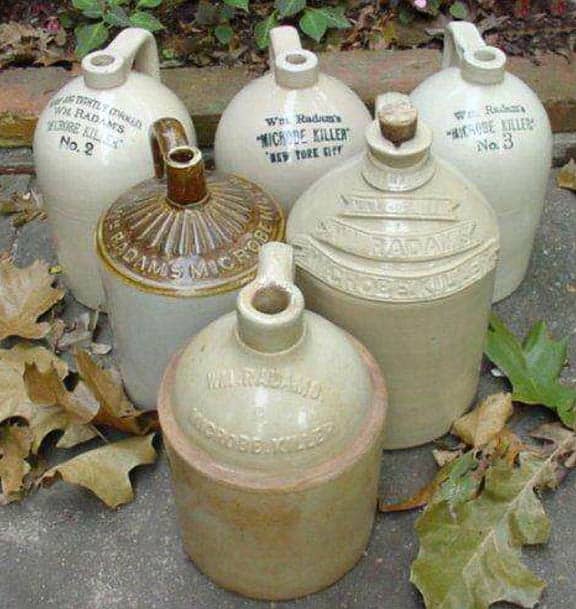 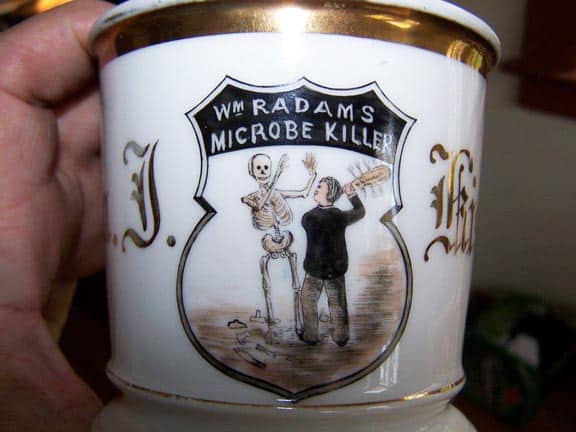 Ferdinand Meyer V is a native of Baltimore, Maryland and has a BFA in Fine Art and Graphic Design from the Kansas City Art Institute and School of Design. Ferdinand is the founding Principal of FMG Design, a nationally recognized design consultation firm. Ferdinand is a passionate collector of American historical glass specializing in bitters bottles, color runs and related classic figural bottles. He is married to Elizabeth Jane Meyer and lives in Houston, Texas with their daughter and three wonderful grandchildren. The Meyers are also very involved in Quarter Horses, antiques and early United States postage stamps. Ferdinand is the past 6-year President of the Federation of Historical Bottle Collectors and is one of the founding members of the FOHBC Virtual Museum.
View all posts by Ferdinand Meyer V →
This entry was posted in Advertising, Article Publications, Druggist & Drugstore, History, Medicines & Cures and tagged austin, bacteria, Daniel R. Barnett, destroyer, fungus, germ, hourglass, Hunt's Remedy, Joe Widman, John Odell, Medicine, quack, Radam's Microbe Killer, scythe, texas, William Radam. Bookmark the permalink.