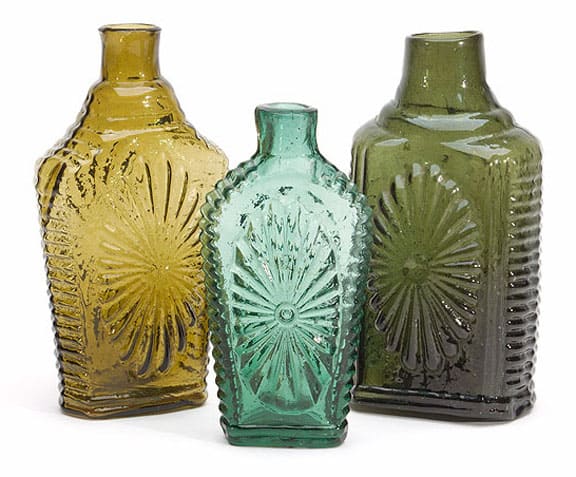 Sunbursts are considered one of the oldest of the American Geometric and Historical Flasks and are generally attributed to the period of 1815 to the early 1830’s. 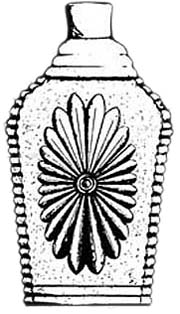 The collectors of Sunburst flasks have been posting some great pictures recently on facebook. My wife and I are admirers but not collectors of these gorgeous pieces that have a common ‘sunburst’ motif on the face of each flask. To understand the the basics of the 30 various molds in the McKearin Group VIII – Sunburst Flasks, I decided to review existing information in my library and online resources. Bill Ham has done a great job in two previous articles in Antique Bottle & Glass Collector that I used for the backbone of this post.

Sunbursts are considered one of the oldest of the American Geometric and Historical Flasks and are generally attributed to the period of 1815 to the early 1830’s. This dating results from historical research and the manufacturing techniques of the flasks. The Sunburst Flasks are all made with 2 piece molds with pontil scar bases and most having shred mouths. Except for the letter embossing on three forms, the sunburst patterns on both sides of the sunburst flask forms are essentially identical.

With many types of antique bottles and flasks, such as bitters, sodas, and medicines, the embossed names, products and locations, advertising, and paper labels greatly simplifies their historical research. Very limited historical information is available for sunburst flasks because they are from the early periods of the glass houses when good records were not maintained, or destroyed in glass house fires. Only 3 of the approximately 33 sunburst forms are letter embossed. There were no paper labels on the flasks because they were purchased without contents and then filled and refilled in bars and saloons.

The first geometric flasks, those with sunburst and Masonic patterns were blown in about 1815. The first historical flasks, those commemorating a historical person or event were not blown until about 1824. Sunburst and Masonic flasks were blown at a number of glass houses during the approximate 1815-1830 period including two in Connecticut, the Pitkin Glass Works, East Hartford, and the Coventry Glass Works, Coventry. Historical flasks were also blown at these glass works. (Read More: Connecticut Sunburst Flasks by and with permission from Bill Ham) 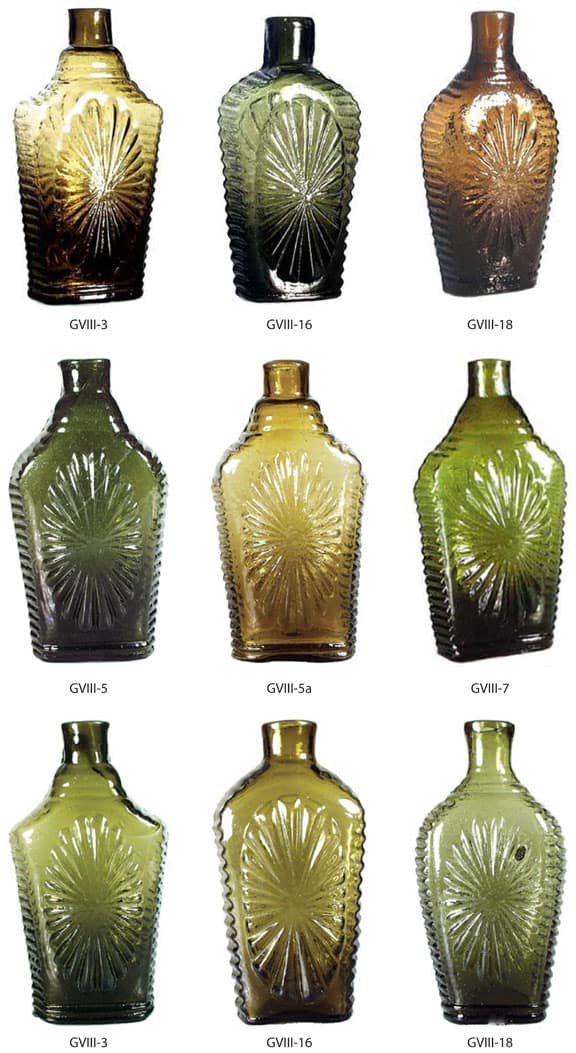 The three sunburst forms having letter embossing are the GVIII-8, GVIII-9, and GVIII-10, with “KEEN” in the center on one side and “P & W” on the other. These three flasks are attributed to the Kenne-Marboro Street Glass Works, Keene, New Hampshire. All the other sunburst flasks have been attributed to glass houses or regions through historical search of records, digging in the ruins of the various glass houses (2) and the similarity of glass quality and color between a sunburst form and other flasks forms from known glass houses. Two very similar sunburst forms that do not have the letter embossing, the GVIII-11 and GVIII-12, have been attributed to the Keene-Marboro Street Glass Works and New England, respectively. (Read More: The Keene Embossed and Similar Sunburst Flasks by and with permission from Bill Ham) 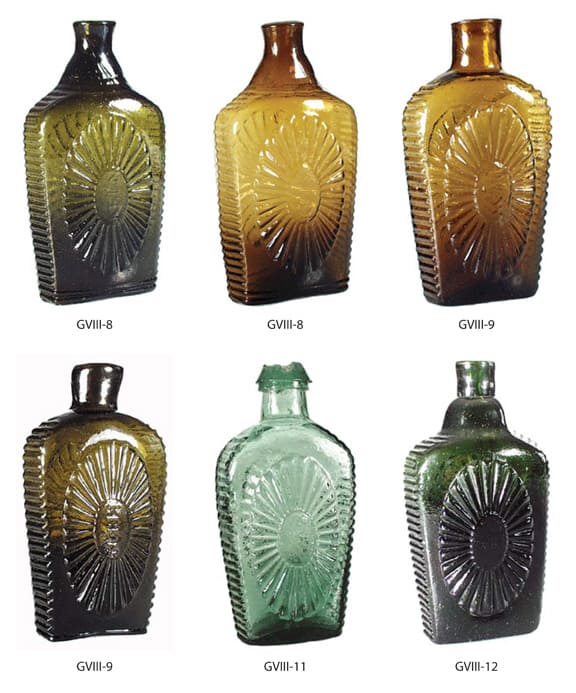 I have compiled some picture and hope my bottle friends will continue posting their examples for inclusion into this gallery. 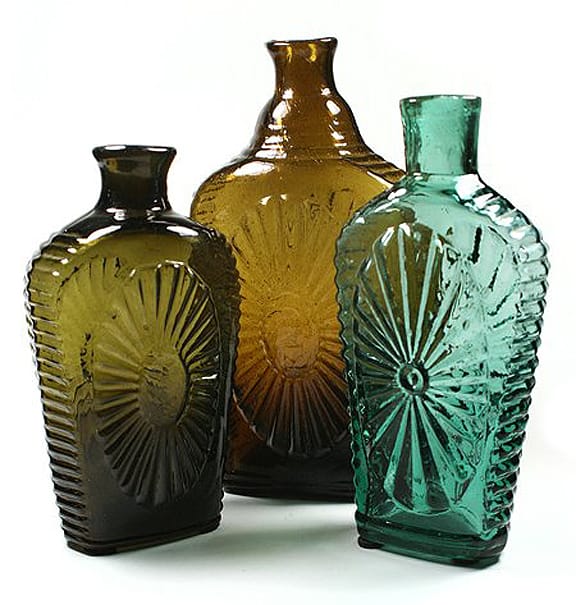 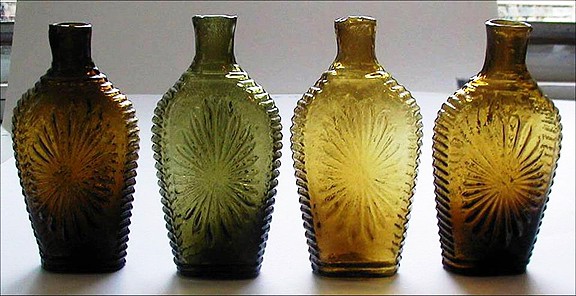 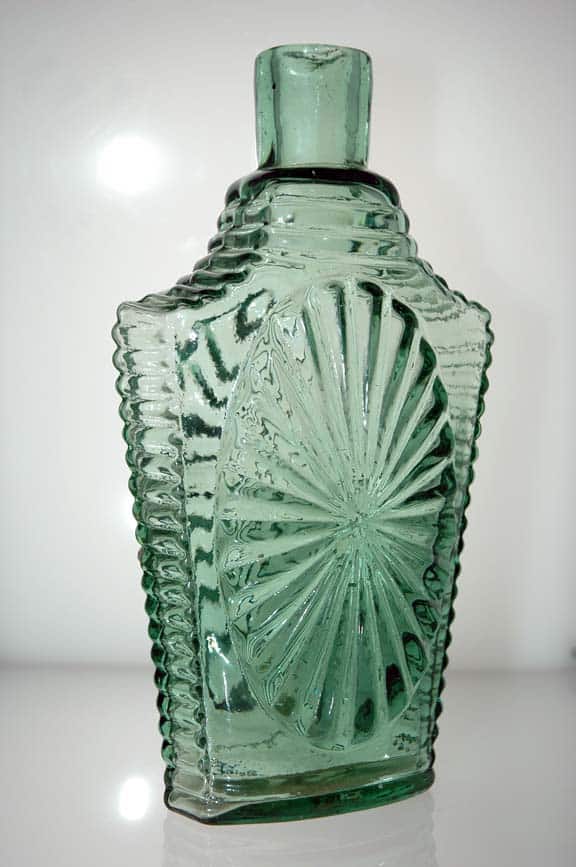 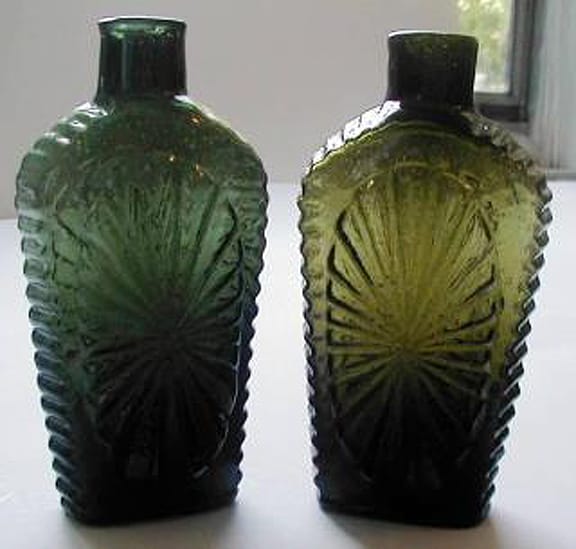 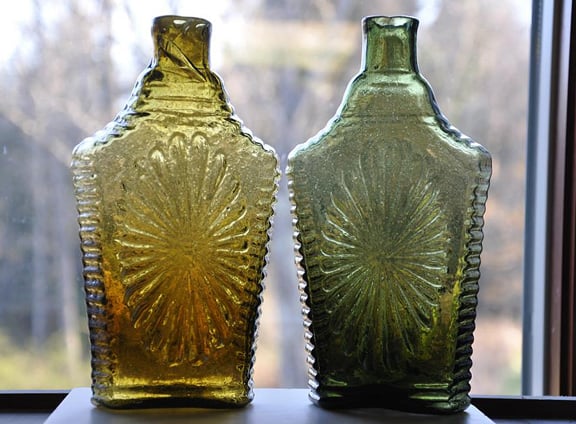 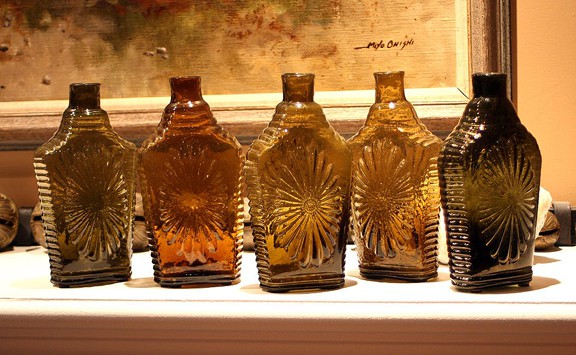 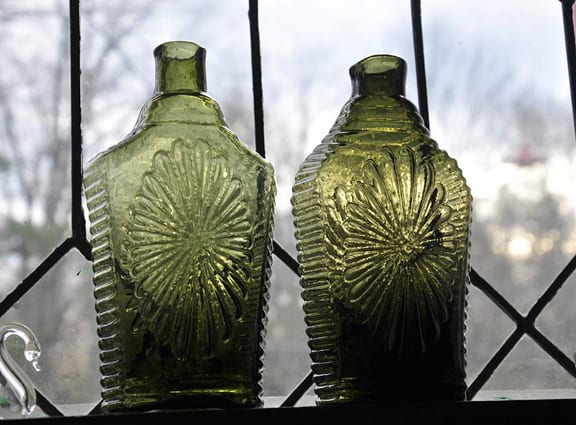 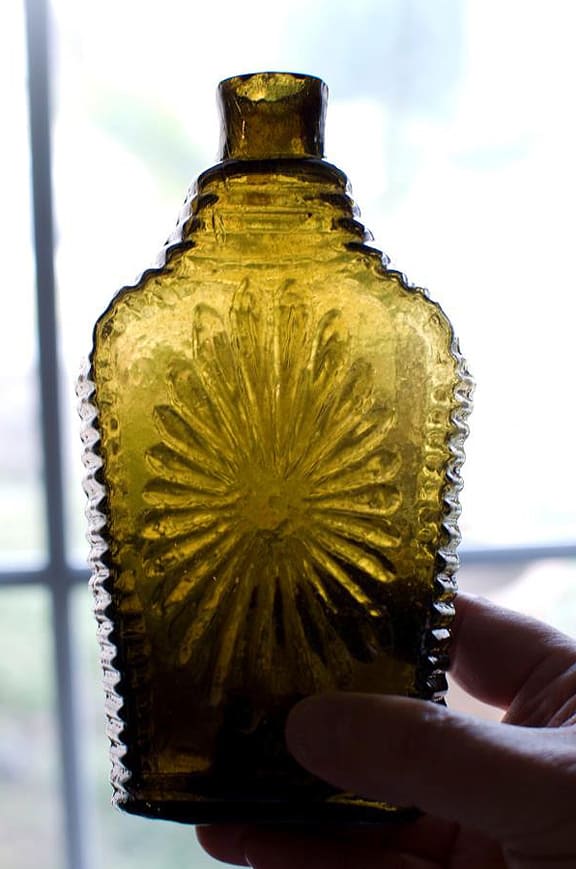 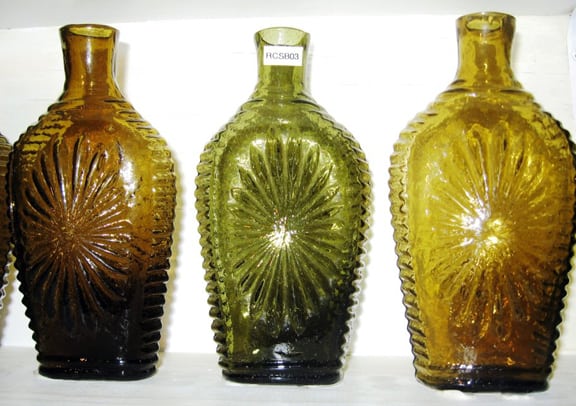 One of my all time favorite molds and very popular among flask collectors for it’s shape and form is the GVIII-18, here are some colors – Rick Ciralli 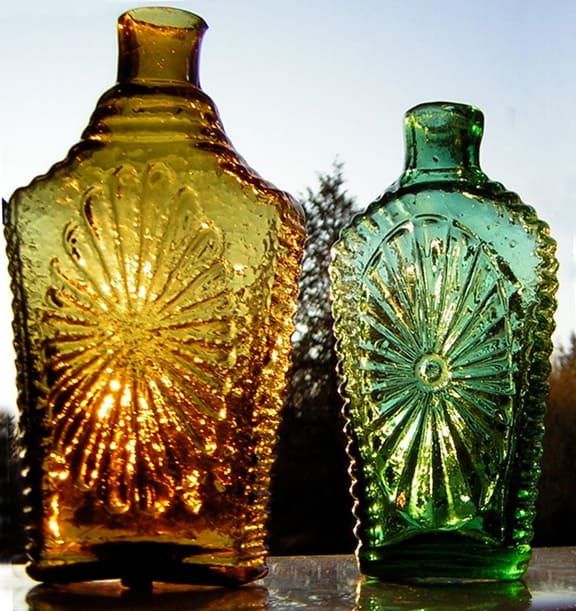 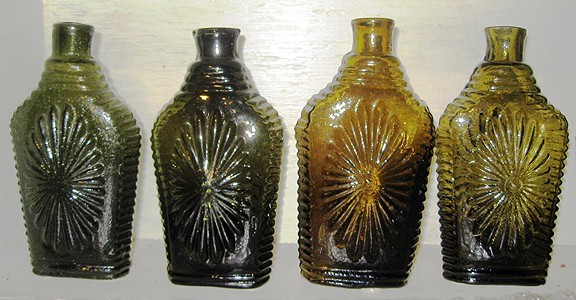 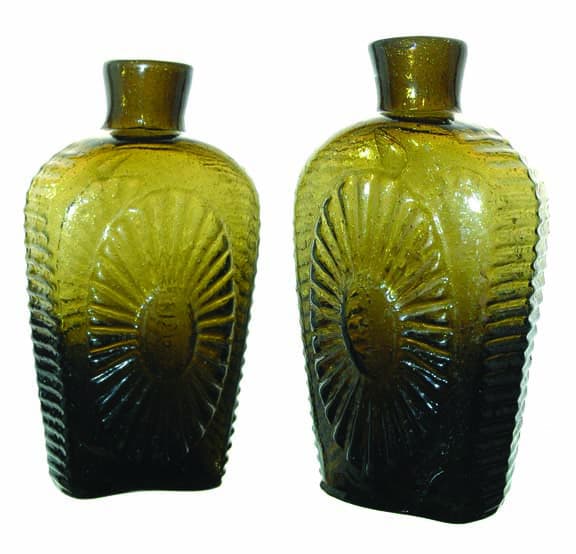 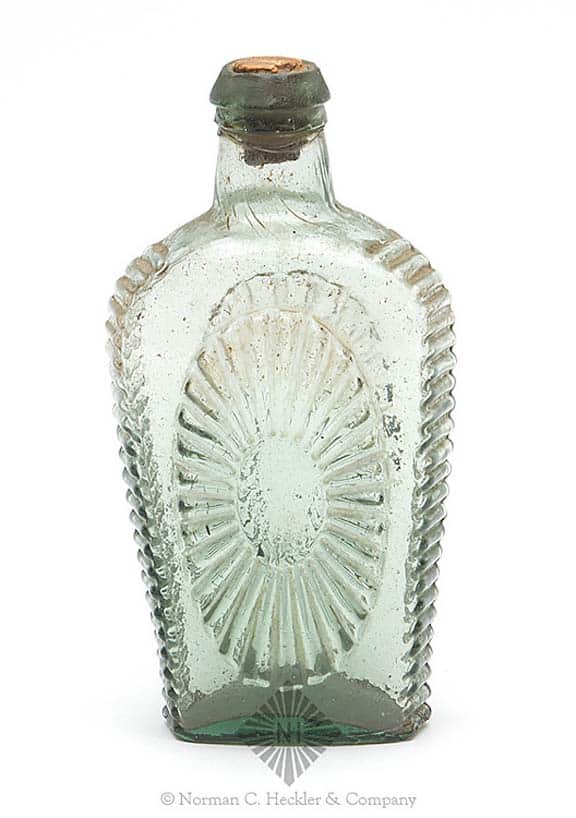 Sunburst Flask, Keene Marlboro Street Glassworks, Keene, New Hampshire, 1820-1830. Sunburst designs encircling a plain oval on each side, brilliant greenish aquamarine, applied sloping collared mouth with ring – pontil scar, half pint; (1 inch series of cracks on the bottom corrugated edge on one side and a shallow flake with a 1/2 inch crack on the other corrugated side at the base). GVIII-11 in an unlisted color This bottle was found in a Glastonbury, Connecticut attic. It retains an old cork and some content residue. It will clean, it is not stained. Displays wonderfully. Rare unlisted color. – Heckler Auction 102

Ferdinand Meyer V is a native of Baltimore, Maryland and has a BFA in Fine Art and Graphic Design from the Kansas City Art Institute and School of Design. Ferdinand is the founding Principal of FMG Design, a nationally recognized design consultation firm. Ferdinand is a passionate collector of American historical glass specializing in bitters bottles, color runs and related classic figural bottles. He is married to Elizabeth Jane Meyer and lives in Houston, Texas with their daughter and three wonderful grandchildren. The Meyers are also very involved in Quarter Horses, antiques and early United States postage stamps. Ferdinand is the past 6-year President of the Federation of Historical Bottle Collectors and is one of the founding members of the FOHBC Virtual Museum.
View all posts by Ferdinand Meyer V →
This entry was posted in Collectors & Collections, Flasks, Glass Companies & Works, Historical Flasks, History and tagged Antique Bottle and Glass Collector, Bill Ham, Conneticut, Coventry, ferdinand meyer, geometric, John April, Keene, Maryo, Michael George, Mike Hauser, New Hampshire, Pitkin, Rick Ciralli, sunburst. Bookmark the permalink.