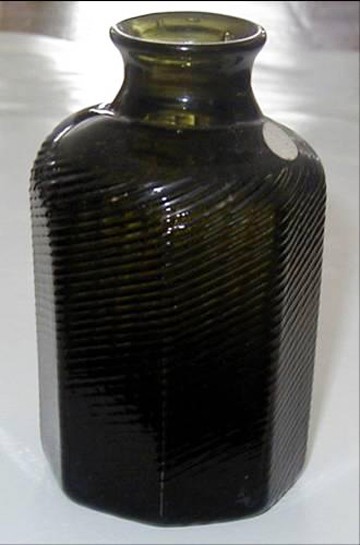 I was looking at all of the Peachridge Glass (PRG) post categories (see the right area of every page) thinking I had written about American snuff jars and bottles before and was surprised that I had missed this intriguing area. Actually yesterday, PRG was one year old, as I launched the site on 24 April 2011. Well over 500 posts and nothing on Snuff… until now.

Most snuff jars have a distinctive, box-like appearance and wide mouth.

Well back to snuff, which is a tobacco product either powdered or taken (snuffed) into the nostrils by inhalation or ground and placed between the cheek and gum. While popular amongst the royalty in early Europe, the product declined amongst the well to do around 1850. Snuff is still widely used today throughout Europe.

Most snuff jars have a distinctive, box-like appearance and wide mouth. Many of the early examples are pontiled. The glass colors are usually yellow olive, olive green and a greenish amber. 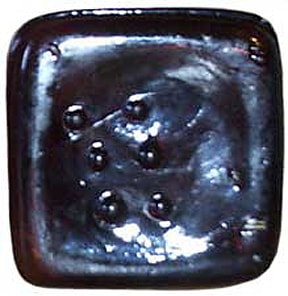 Braille dot pattern on base

Apparently, many of the early jars have dot patterns on the base. The jars were filled before the labels were put on because of the strength properties of the snuff, so the packers needed the dots to know what went where. Most folks were illiterate back then, so dots were used instead of words. 5 and 6 dots would indicate heavy snuff for the mouth, which was not to be sniffed. A pontil marked, 1840-1850’s snuff may have two marks purposely made with iron rods on the bottom while a 20th century machine made snuff had the dots too. I would like to hear more about this from the snuff jar collectors.

Looking around the web and facebook allowed me to use a few pictures to show how nice-looking these bottles are. 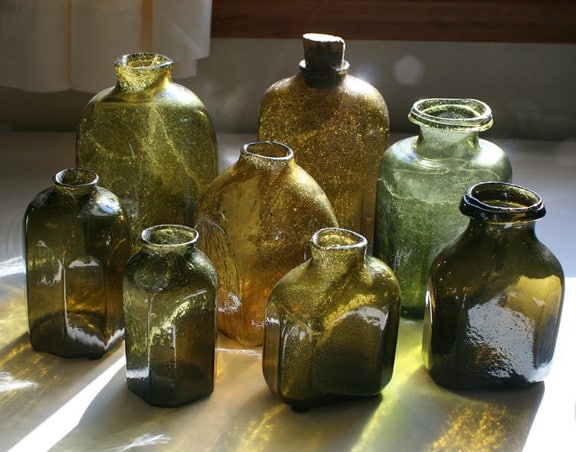 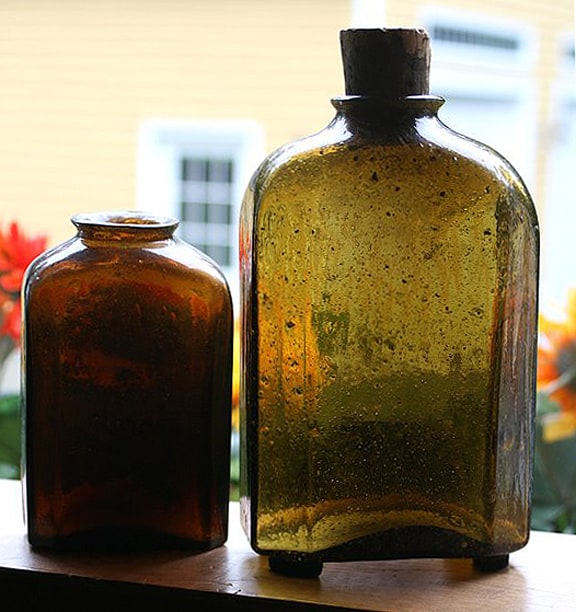 Michael George: The big snuff I got from Rick Ciralli compared to an "average" sized snuff! 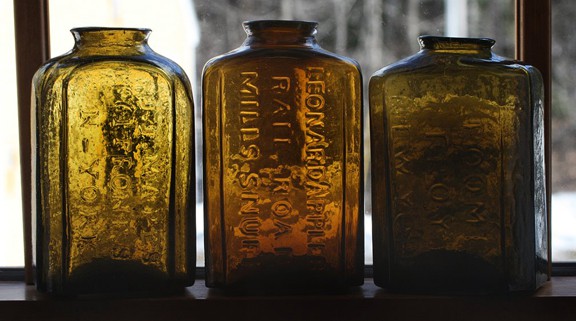 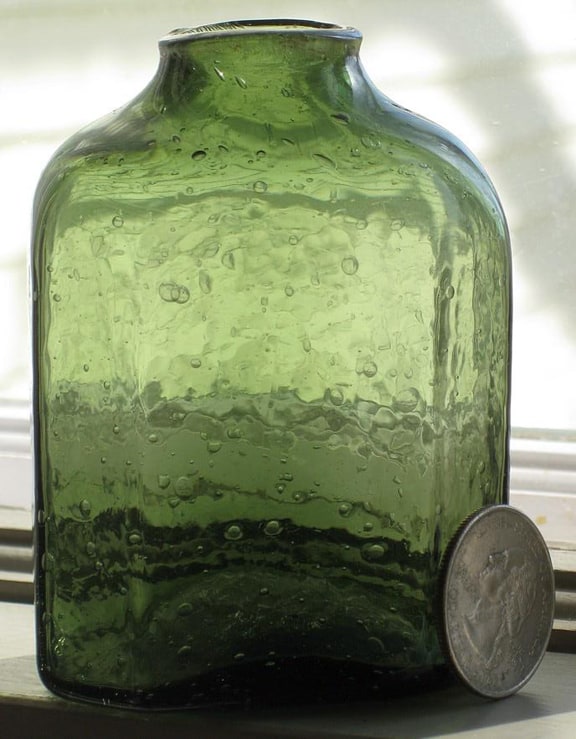 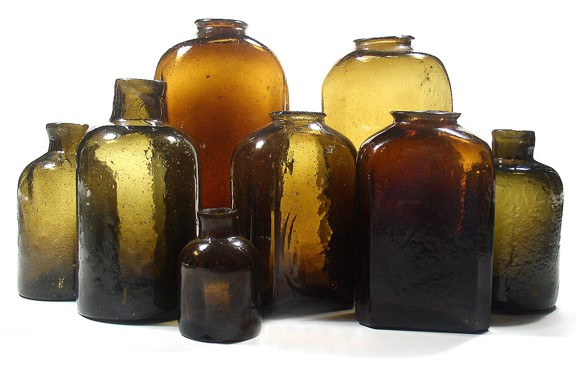 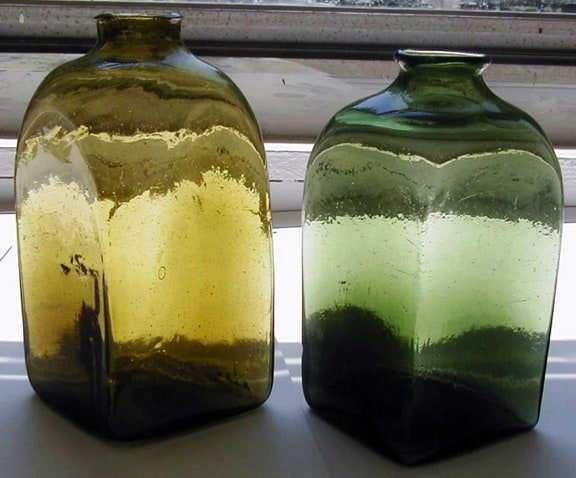 A pair of larger snuffs in clean colors - Rick Ciralli 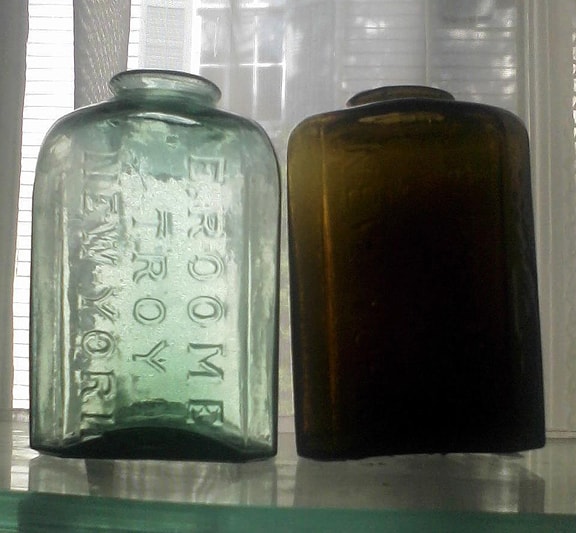 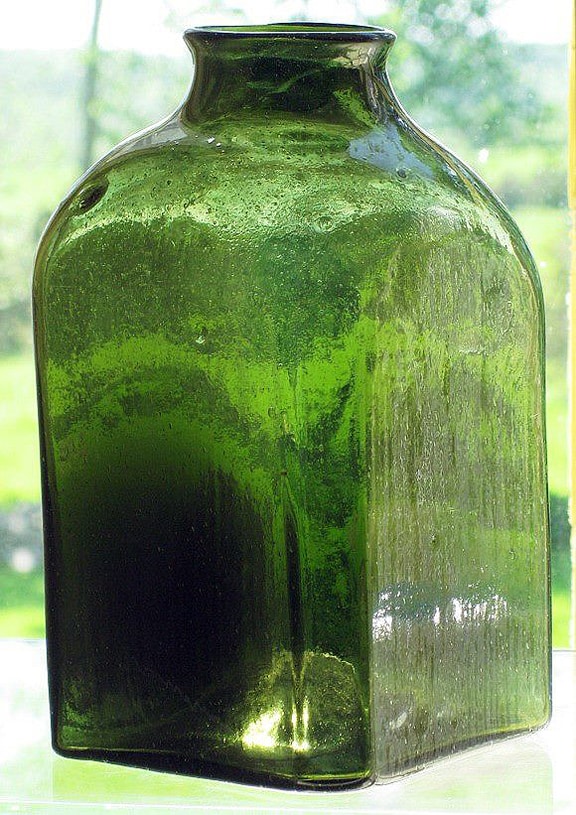 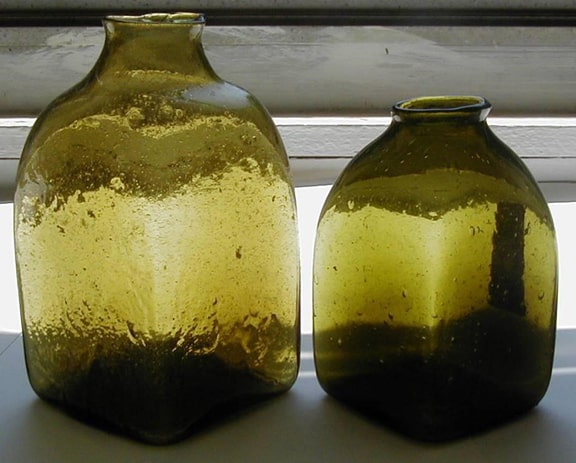 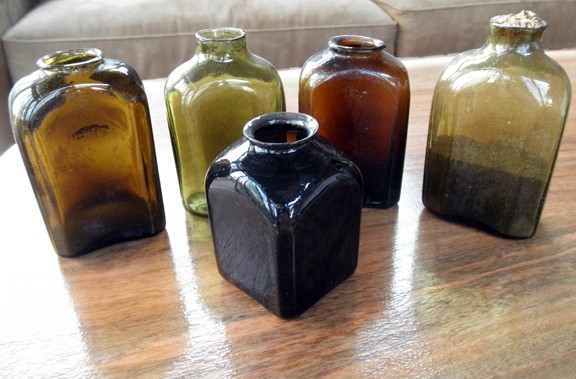 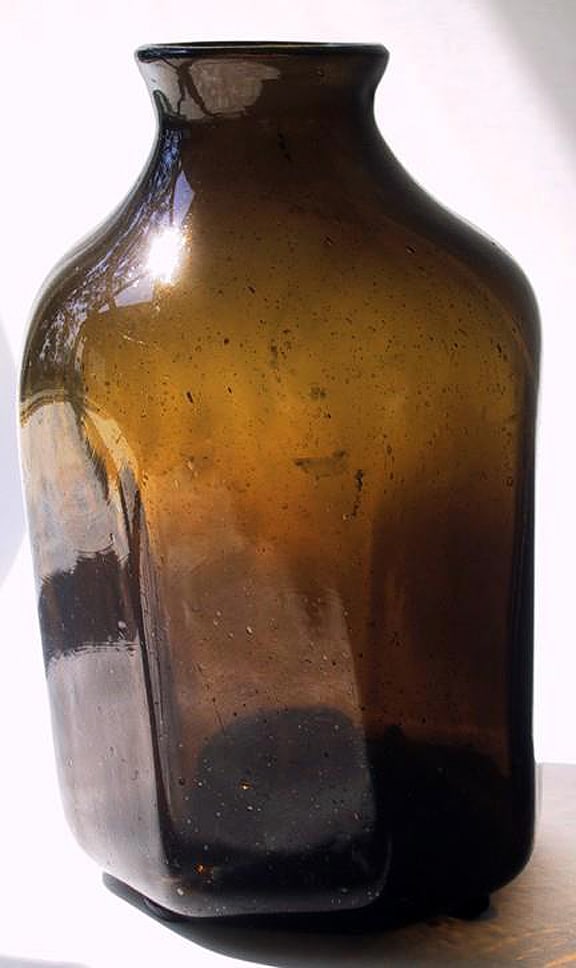 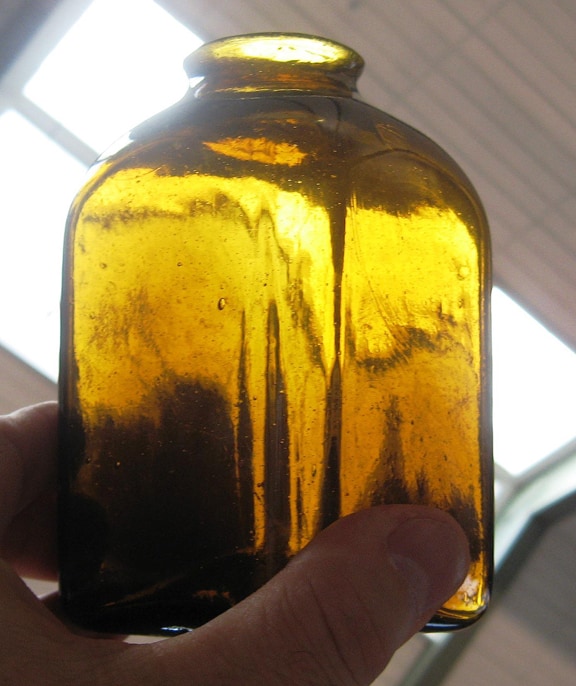 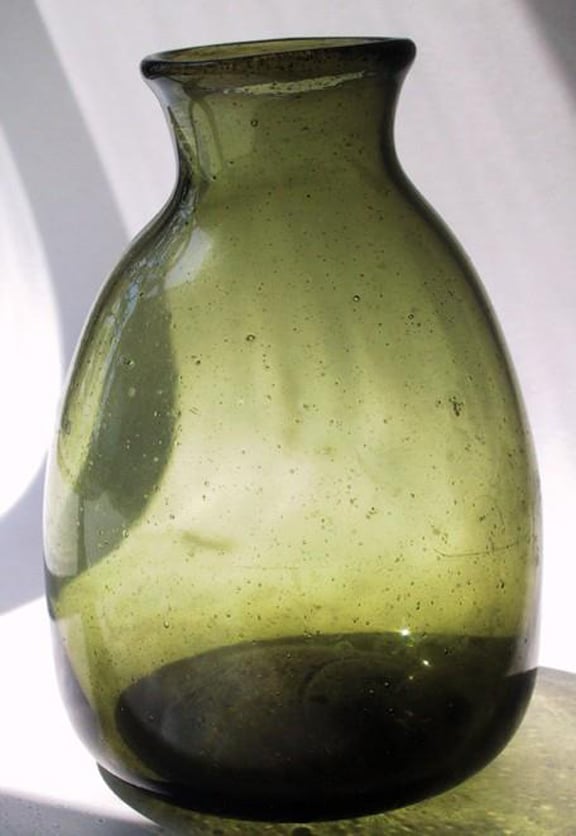 Colloquially referred to as the Pitkin egg. This example came from a Southerner by the name of Richard Haygood. It arrived in Vermont wrapped in a sock and packed in "popcorn" (not the foam stuff but the type you put butter on) – Jeff Noordsy 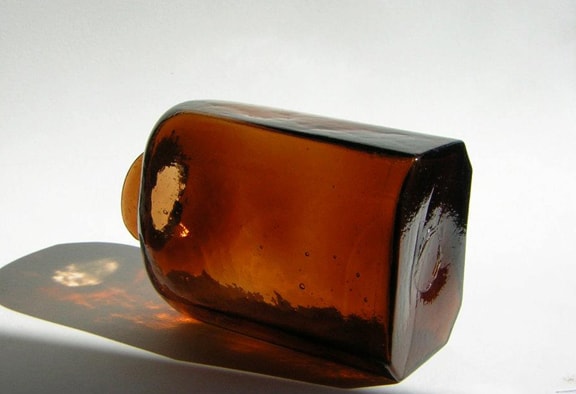 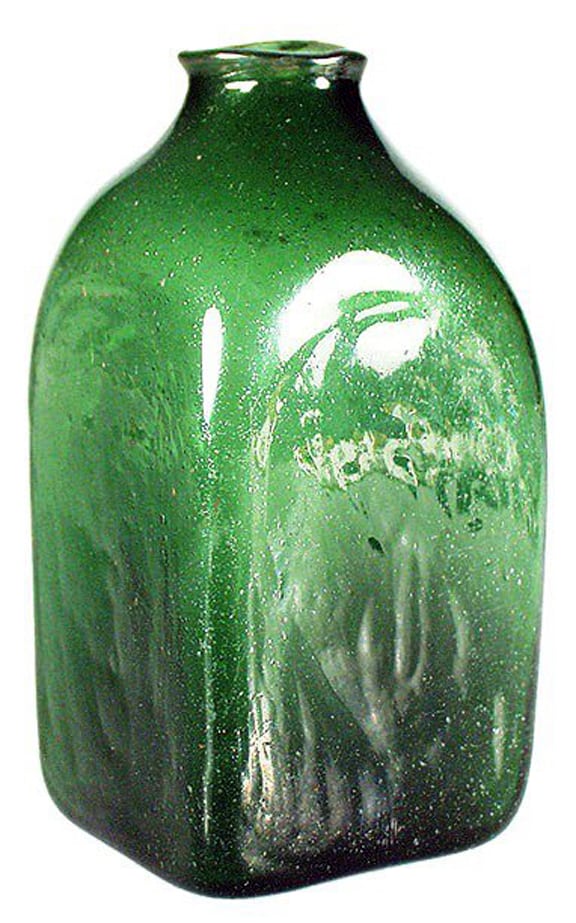 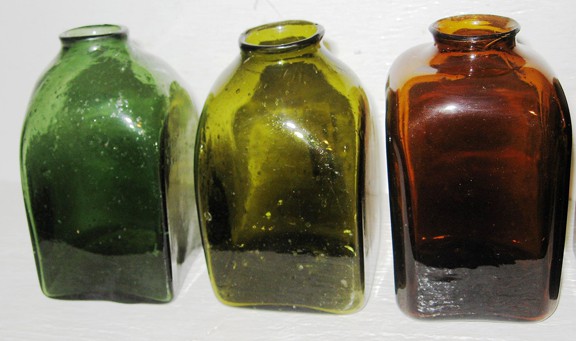 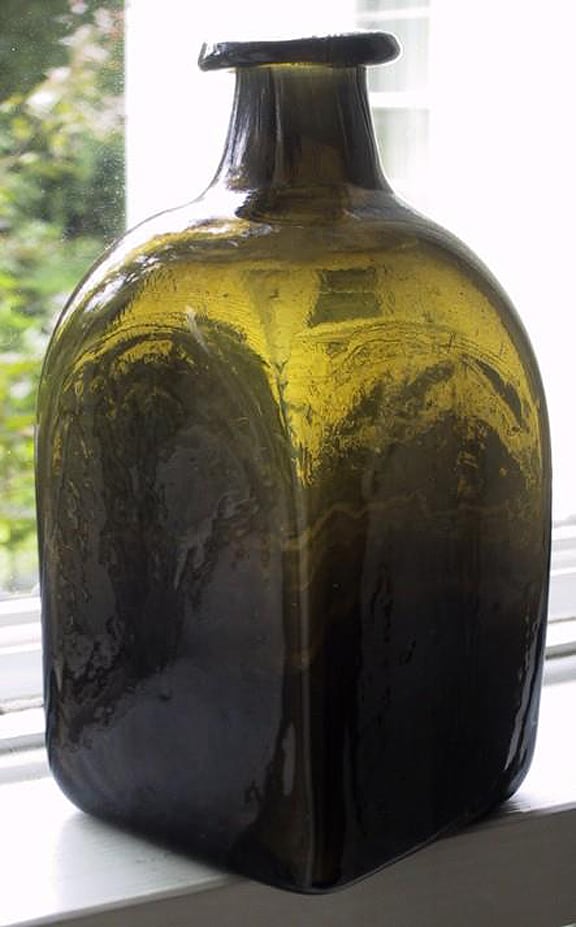 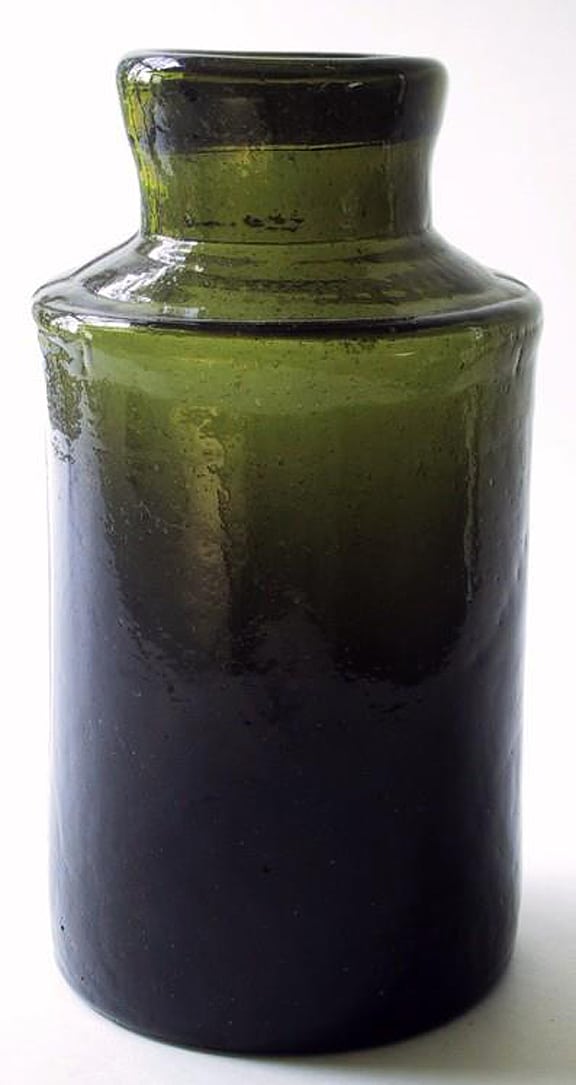 Over the years, called a snuff and a mustard. The bottle was dug about 15 years ago by Roy Topka in the rough area of Mount Vernon/Mount Pleasant. Also in the hole were half a dozen Brinckerhoffs (which I bought second hand at the time for $400 and struggled to sell for $450), multiple Phoenix Bitters and the famed "Icelandic Balm for Pulmonary Consumption." The piece has a HUGE tubular pontil scar and some interesting base markings. It is to this day the only example I've encountered - Jeff Noordsy 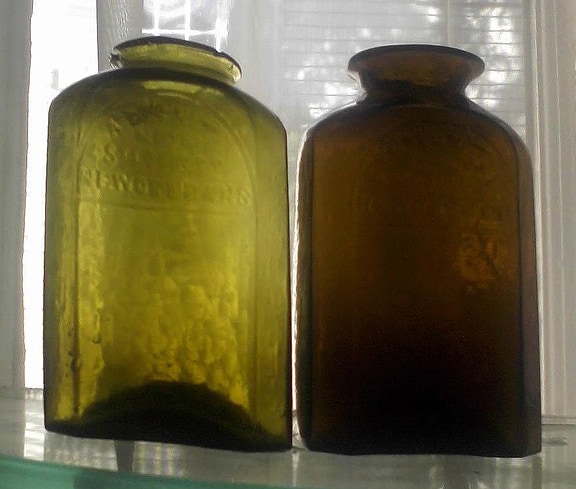 Two very interesting mid Atlantic snuffs. Both are badly damaged but blown in the same dip mold. The one on the left is an amber with darker striations shading to black in the shoulder and lip. The one on the right is a pale yellow green shading to a yellow-amber in the lip. These along with the blue Baltimore star ink came of out an 1830s-50s privy dug in west Baltimore – Chris Rowell 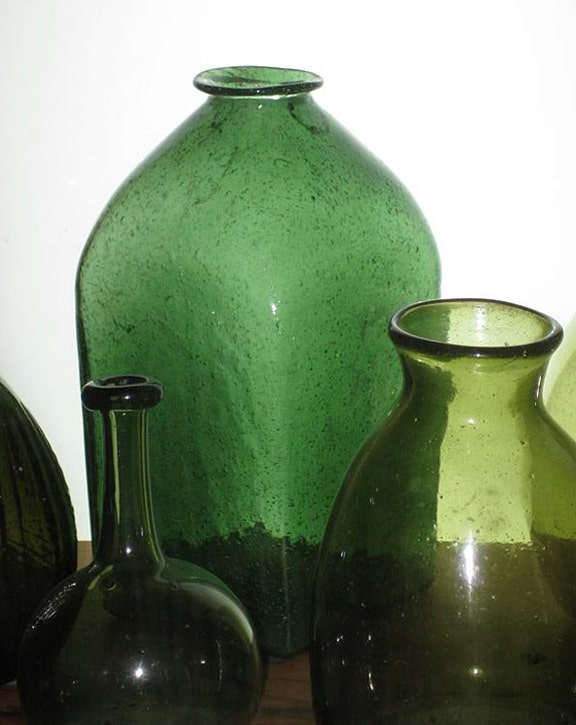