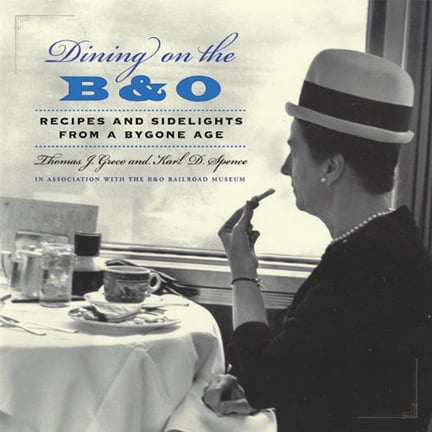 Dining on the B&O Recipes and Sidelights from a Bygone Age By Thomas J. Greco and Karl D. Spence

Four or five years ago, Elizabeth and I purchased a group of Baltimore and Ohio railroad china. You see, I grew up in Baltimore, am interested in Model Railroading, I am a rail fan and most recently, visited the Baltimore and Ohio Railroad Museum prior to the Baltimore Bottle Show this past March. I thought I would put together a little information of these great pieces of history.

Passengers who dined on the Baltimore and Ohio during the heyday of American railroading received five-star service: white tablecloths, china, silver, food cooked from scratch, and the undivided attention of skilled waiters. The B&O’s cuisine won wide acclaim as the finest railway food in the country. Passengers enjoyed it as the slightly swaying dining car clicked along over the rails. 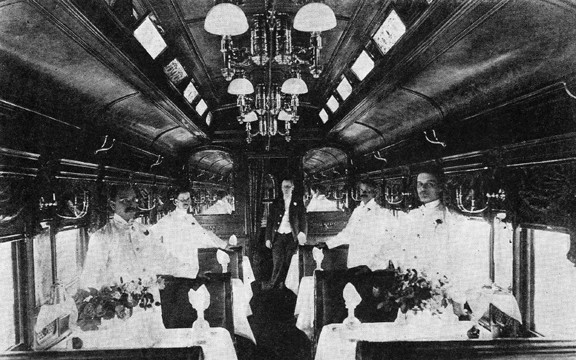 The dining car "Queen" on the Royal Blue of the Baltimore and Ohio Railroad, as advertised in 1895. 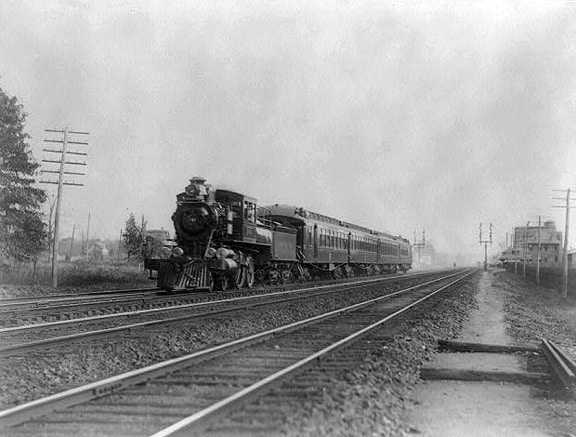 [from Wikipedia] The Royal Blue was the Baltimore and Ohio Railroad (B&O)’s flagship passenger train between New York City and Washington, D.C., in the United States, beginning in 1890. The Baltimore-based B&O also used the name between 1890 and 1917 for its improved passenger service between New York and Washington launched in the 1890s, collectively dubbed the Royal Blue Line. Using variants such as the Royal Limited and Royal Special for individual Royal Blue trains, the B&O operated the service in partnership with the Reading Railroad and the Central Railroad of New Jersey. Principal intermediate cities served were Philadelphia, Wilmington, and Baltimore. Later, as Europe reeled from the carnage of World War I and connotations of European royalty fell into disfavor, the B&O discreetly omitted the sobriquet Royal Blue Line from its New York passenger service and the Royal Blue disappeared from B&O timetables. Beginning in 1917, former Royal Blue Line trains were renamed: the Royal Limited (inaugurated on May 15, 1898), for example, became the National Limited, continuing west from Washington to St. Louis via Cincinnati. During the Depression, the B&O hearkened back to the halcyon pre-World War I era when it launched a re-christened Royal Blue train between New York and Washington in 1935. The B&O finally discontinued passenger service north of Baltimore on April 26, 1958, and the Royal Blue faded into history.

Railroad historian Herbert Harwood said, in his seminal history of the service, “First conceived in late Victorian times to promote a new railroad line … it was indeed one of the most memorable images in the transportation business, an inspired blend of majesty and mystique … Royal Blue Line … Royal Blue Trains … the Royal Blue all meant different things at different times. But essentially they all symbolized one thing: the B&O’s regal route.” Between the 1890s and World War I, the B&O’s six daily Royal Blue trains providing service between New York and Washington were noted for their luxury, elegant appearance, and speed. The car interiors were paneled in mahogany, had fully enclosed vestibules (instead of open platforms, still widely in use at the time on U.S. railroads), then-modern heating and lighting, and leaded glass windows. The car exteriors were painted a deep “Royal Saxony blue” color with gold leaf trim.

The B&O’s use of electrification instead of steam power in a Baltimore tunnel on the Royal Blue Line, beginning in 1895, marked the first use of electric locomotives by an American railroad and presaged the dawn of practical alternatives to steam power in the 20th century. Spurred by intense competition from the formidable Pennsylvania Railroad, the dominant railroad in the lucrative New York–Washington market since the 1880s, the Royal Blue in its mid-1930s reincarnation was noted for a number of technological innovations, including streamlining and the first non-articulated diesel locomotive on a passenger train in the U.S., a harbinger of the steam locomotive’s eventual demise. 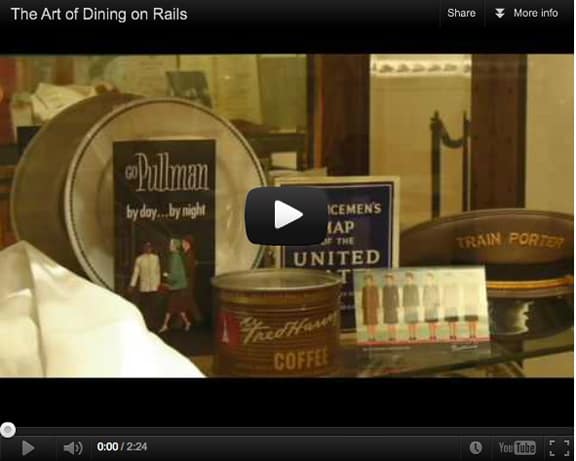 In 1924, D. William Scammell bought Maddock Pottery in Trenton, New Jersey, and founded Scammell China Co. The pottery made railroad and hotel china and began making dinnerware for home use in 1939. Scammell China Co. was bought by Sterling China in 1954. Your china was first made in 1927 to celebrate Baltimore & Ohio Railroad’s 100th anniversary. The pattern, which was based on a similar design made by Enoch Wood for the B&O Railroad c.1828, was called “Colonial.” Collectors called it “Centennial” or “Centenary,” which is what it is known as today. Pieces feature historical scenes and views of important points along the B&O line. The borders are locomotives and rail cars from various years. Most pieces were made with a blue background, but a few were made with a white or floral background. At least 26 different items were made. The railroad sold boxed pieces of china as souvenirs. Plates sold for $1 each and platters for $3.40. Some pieces of Centenary were made by Buffalo China. Sterling China began making Centenary china after World War II. Shenango China made Centenary china for the B&O Railroad Museum. Collectors look for the old Centenary dishes made by Scammell. 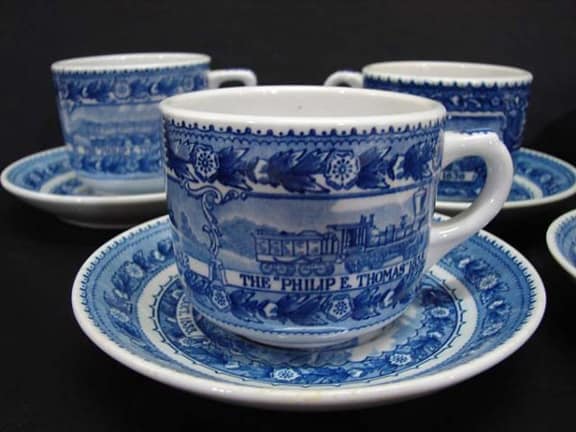 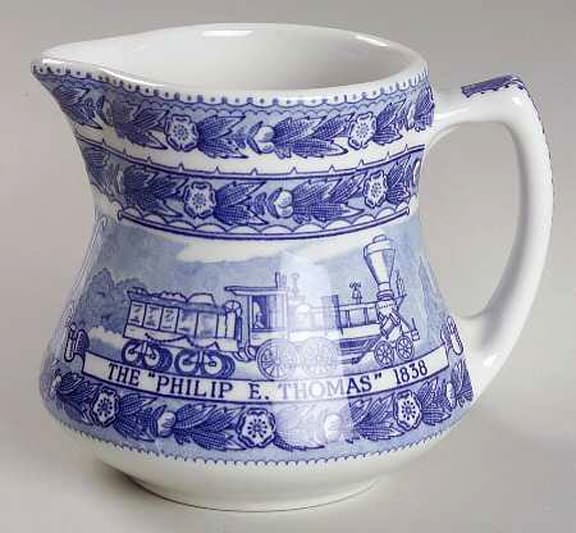 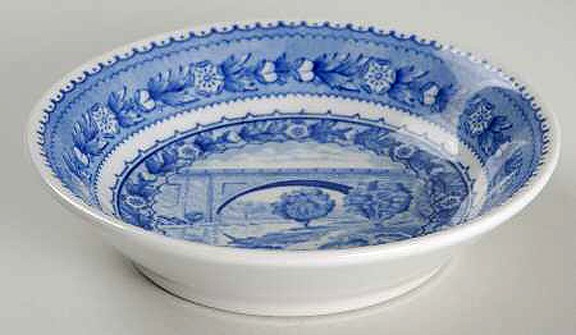 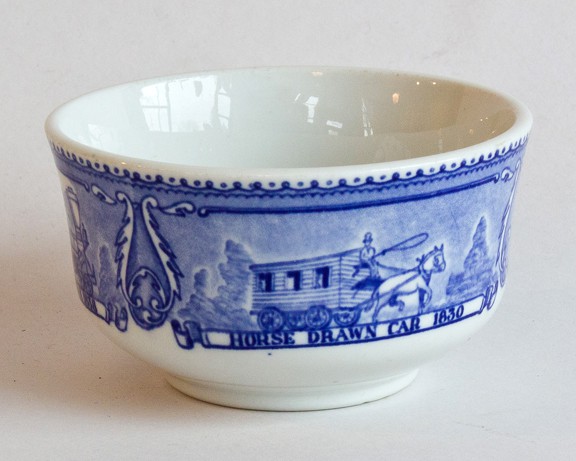 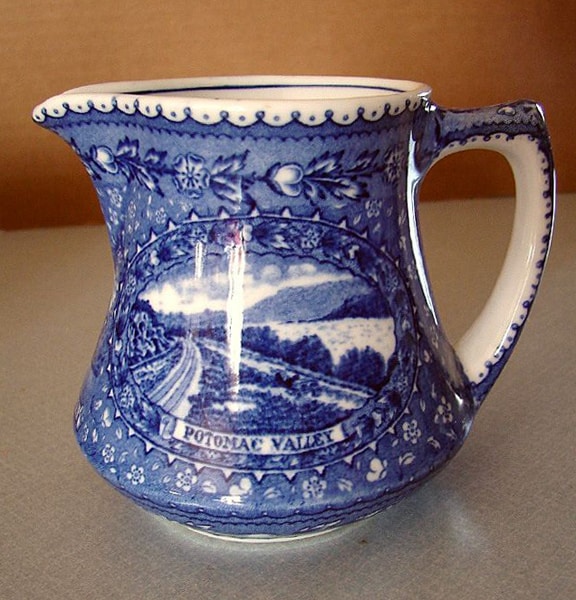 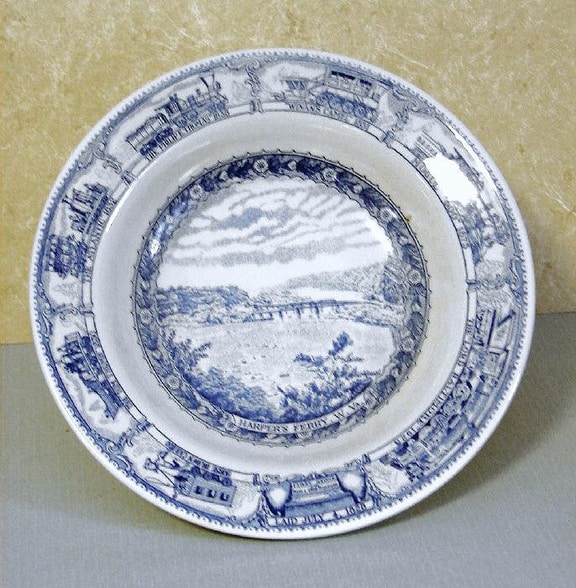 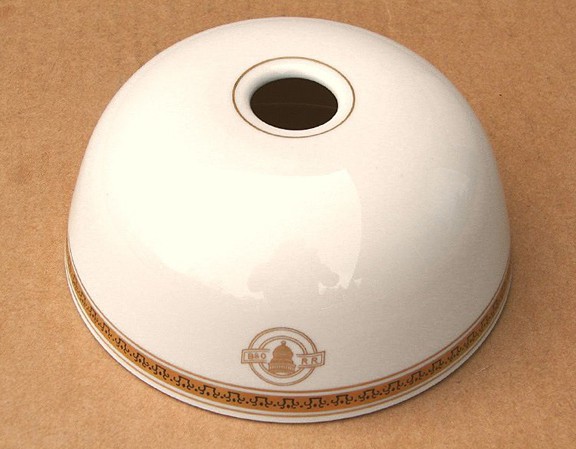 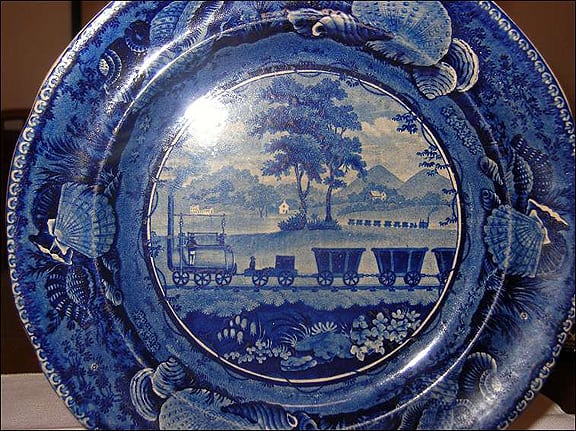 Baltimore & Ohio Railroad – 10 inch plate Background: The Baltimore and Ohio Railroad plate was one of many “American views” produced by Enoch Wood and Sons of Burslem, Stoke-on-Trent, England. The engraving used was of Hetton Railroad, England. It was first published in The American Traveller Broadside, Boston in 1826 and subsequently reproduced in Dunbar’s History of Travel in America, Vol II, p.725. Dumbar states: “probably the primary picture of an actual railway printed in the United States.” The view shows and English type of engine similar to that designed by George Stephenson in 1825. The Baltimore & Ohio Railroad was built to transport freight and transport over the Allegheny Mountains. It was begun in 1828, but not until June 1831 was a practical steam locomotive built for regular service. This locomotive was perfected by Phineas Davis of York, Pennsylvania, for the Baltimore & Ohio. Halsey has suggested that the ceramic views were made about the time of the laying of the rails for the Baltimore & Ohio, 1828. This was two years after the engraving was published in Boston. Description: The shell border with the circle surrounding the central view was the most frequently used for “Views of America” The foreground shows sprays and clusters of various flowers on a dark ground across the front. Middle distance – Right to left, a quaint train. Early English locomotive with tender and three open freight cars. The locomotive has six driving wheels, a boiler the whole length, with man on running board, and smoke stack in front, three times height of boiler. Open country from train to background, two large trees in centre. Another unique freight train crossing county in diagonal line from background to middle distance right. Background – Range of hills, hills and a few houses.

Ferdinand Meyer V is a native of Baltimore, Maryland and has a BFA in Fine Art and Graphic Design from the Kansas City Art Institute and School of Design. Ferdinand is the founding Principal of FMG Design, a nationally recognized design consultation firm. Ferdinand is a passionate collector of American historical glass specializing in bitters bottles, color runs and related classic figural bottles. He is married to Elizabeth Jane Meyer and lives in Houston, Texas with their daughter and three wonderful grandchildren. The Meyers are also very involved in Quarter Horses, antiques and early United States postage stamps. Ferdinand is the past 6-year President of the Federation of Historical Bottle Collectors and is one of the founding members of the FOHBC Virtual Museum.
View all posts by Ferdinand Meyer V →
This entry was posted in Collectors & Collections, Dinnerware, Glass Makers, History and tagged B&O, Baltimore & Ohio, Centenary, centennial, china, colonial, dining, Maddock Pottery, Railroad, railroading, Royal Blue, Royal Limited, Shenango, William Scammell. Bookmark the permalink.