Bottles from the Augusta Arsenal 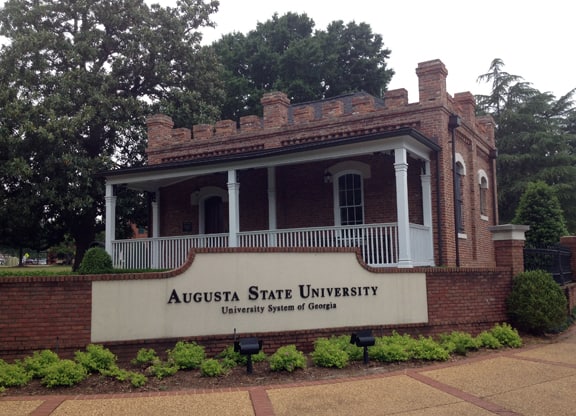 Bottles from the Augusta Arsenal

I am at the Greenville-Spartanburg airport waiting for a flight back to Houston. I never know how I will be connected with bottles each day, so today was a surprise. I had business at Augusta State University and found a great cache of old bottles in the historic Guardhouse Museum on the corner of the campus.

Augusta State University (ASU) is a public university located in Augusta, Georgia, United States and is the oldest such institution in the state of Georgia (while the University of Georgia is the oldest state chartered university in Georgia and the United States). The University was founded as the Academy of Richmond County in 1783. It opened in 1785 and offered collegiate-level classes from its earliest days, and its classes were overseen by the state legislature. 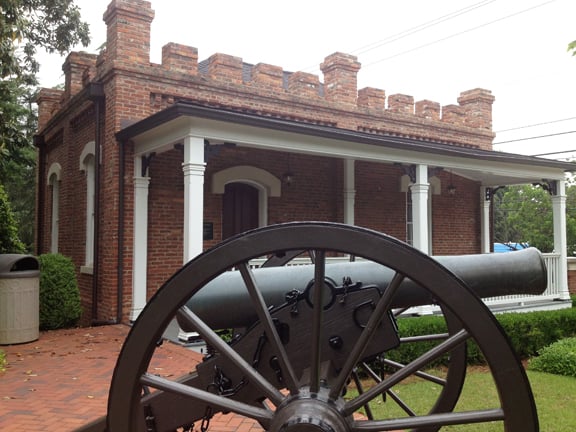 I met with the campus architect and we walked their new exterior ASU History Walk. The ASU History Walk is a 1.1 mile trail that invites walkers to enjoy a beautifully landscaped brick pathway around campus that includes rest areas and brick markers with text about the history of the university, the Augusta Arsenal, and the neighborhoods of Sand Hills and Summerville. 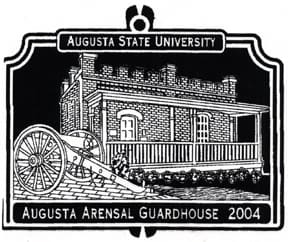 Anchoring the walk at the corner of Walton Way and Katherine Street is a restored 1866 Arsenal Guardhouse. Now a History Museum, it houses artifacts, photographs, and other memorabilia of their historic past. Most of the artifacts were discovered in archaeological digs on campus. The cell room was restored, complete with costumed figures, to portray prisoner life in the late 1800s. At the Walton Way and Arsenal Street History Walk is a military cemetery that holds the remains of U. S. and Confederate soldiers and their dependents.

Most of the artifacts were discovered in archaeological digs on campus.

Originally, the U.S. Arsenal was on the banks of the Savannah River. However, the site proved to be unhealthy, with frequent fevers and deaths occurring among the soldiers and their families. The commandant, Capt. Matthew M. Payne, recommended the arsenal be moved to the healthier “hill” location, and in 1826 Congress authorized the purchase of 72 acres that were owned by Sen. Freeman Walker. Walker’s summer estate, called Belle Vue (beautiful vista) was purchased for $6,000, and a one-acre parcel was set aside as a cemetery for the Walker family. 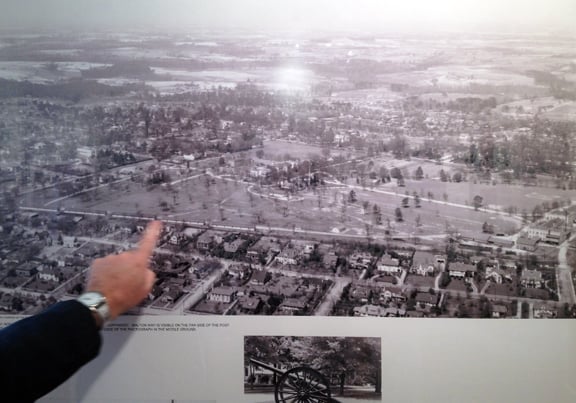 The arsenal relocated the following year alongside the toll plank road that became known as Walton Way. With a $49,000 appropriation and some building materials from the original arsenal, four buildings (the present quadrangle) connected by a loop-holed wall were constructed. The buildings were completed in 1828 with the first occupants being Company C, Second Artillery. During the later part of that year, the arsenal was already supplying arms for the Georgia militia and for the Harper’s Ferry Armory.

The troops saw action in the Seminole War in 1835 and also in campaigns against the Creek Indians. Interestingly, Lt. William T. Sherman spent 6 months at the arsenal in 1844. He is remembered most for his later march through Georgia during the Civil War. 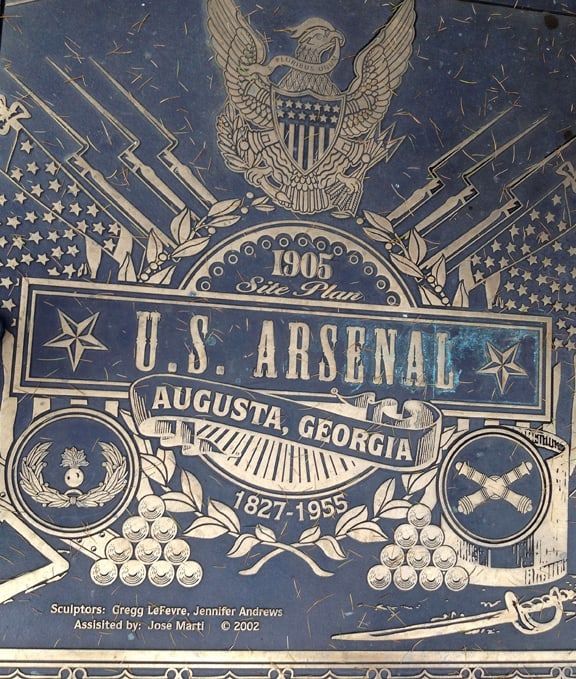 The August Arsenal was an established U.S. Arsenal at the time of the war however, it was the Confederates who greatly expanded its facilities and capacity. Captured by Georgia troops upon the session of that State in late January 1861, by the following summer Confederate Chief of Ordnance, Josiah Gorgas had decided to make it a “great arsenal”. 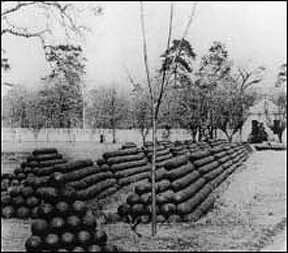 Soon after the organization of his department in July of 1861 Col. Gorgas sent Major George Washington Rains, a scientist, professor and graduate of West Point on a tour of the South to organize the components necessary for powder production and to locate a site suitable for erection of a first class powder mill. On July 20th, after careful consideration of a number of potential sites Rains chose Augusta which would also include a Confederate arsenal. Gorgas placed Rains in charge of erecting the Powder Works and chose Capt. W.G. Gill to command the Arsenal both of which he intended be built with the old U.S. Arsenal as its nucleus. 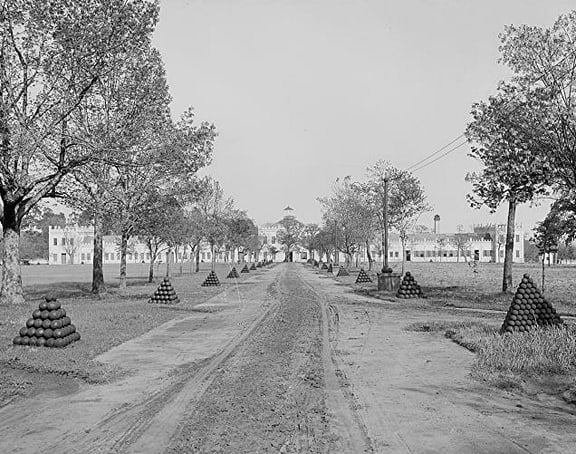 Augusta made a very favorable location for the Powder Works due to its location away from probable hostilities, its railways, its canal which provided transportation and power, its temperate climate and its location near enough to the city for a source of labor and supplies yet far enough for safety. More uniquely, Augusta afforded a water supply free from earthy lime salts to insure the purity of the powder and an abundant porous wood required in making charcoal, another requirement for the manufacture of gun powder. Such a location, conforming to all of these requirements could be found no where else in the Confederacy but Augusta. However, Augusta lacked nearly all of the necessary facilities and machinery required for such large scale military production. These would have to be built. 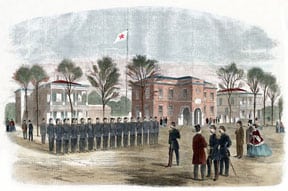 Rains began constructing his Powder Works on the grounds of the old U.S. Arsenal between the Savannah River and the canal, just west of the city in the fall of 1861. Possibly due to poor health Gill was however, slow in getting production underway. Though he did have constructed a large castellated brick building, as late as the winter of 1862 the Arsenal still had produced only 30,000 rounds of small arms ammunition, some cartridge bags and knapsacks. In April 1862, Gorgas relieved Gill of his post and placed Rains, now a Colonel, in command of both the Powder Works and Arsenal. On April 10, 1862, in only seven short months official operation of the Augusta Powder Works began.

The Confederate Powder Works at Augusta would become one of the most amazing success stories in the history of American manufacturing. Armed with only a pamphlet describing the processes and machinery of the Waltham Abbey Powder Works in England, then the best in the world, Col. Rains in less than a year remarkably forged a complete powder production facility. This complex of twenty-six buildings, including refineries, laboratories, rolling mills and test ranges grew, by war’s end, to rival if not surpass Europe’s best facilities to produce, arguably, the finest grade of powder in the world. 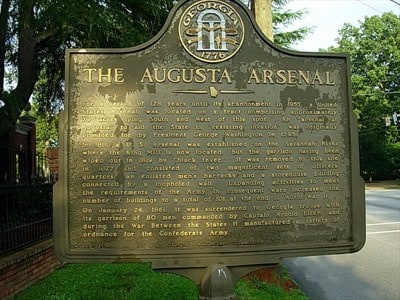 Over the next three years came to be the central gun powder making plant in the South and an important western arsenal. Threatened by Sherman in his “March to the Sea”, Augusta Arsenal production fell dramatically in the late fall and winter of 1864. Although never destroyed, by early spring 1865 it had become largely ineffective due to the crumbling Southern infrastructure, labor and material shortages. Throughout the war Augusta was a prolific supplier of all kinds of arms and equipment including horse equipment particularly curry combs and brushes and, arguably produced the finest grade of gun powder in the world!

Horse Equipment: During the war period, the Augusta Arsenal routinely issued horse equipment in “sets”, consisting of mostly the Jenifer saddle until the fall 1863, then the McClellan. The complete set included a bridle, halter, saddle bags and probably a saddle blanket, although it did not always have a full compliment of every item. Additional equipment like the nose bag, curry comb and brush were often issued separately and usually in mass to various commands. In fact, Augusta was the Confederacyís single largest producer of curry combs and brushes. Descriptions in arsenal records of Augusta’s horse equipment are vague but those of commercial contractors supplying equipment to the arsenal are more revealing. 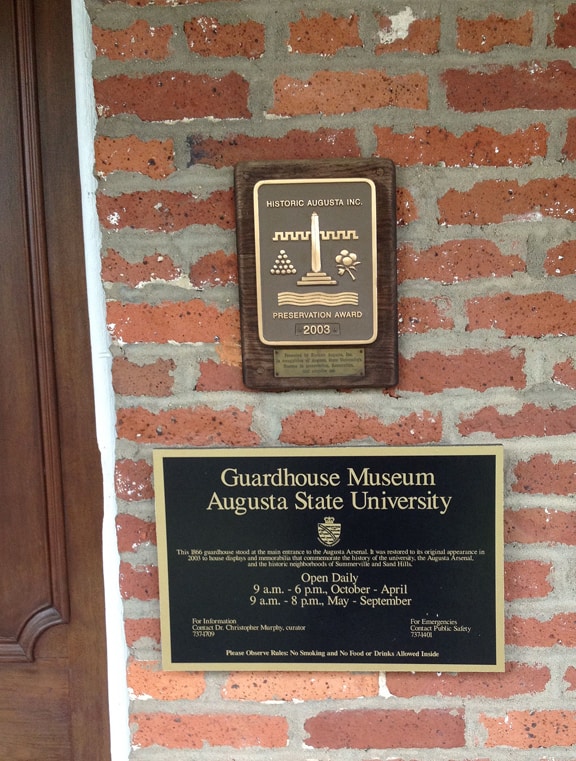 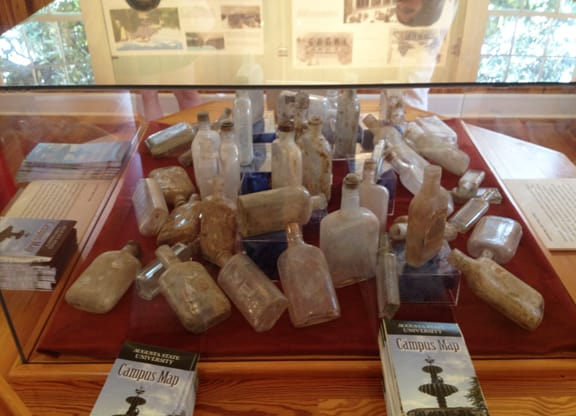 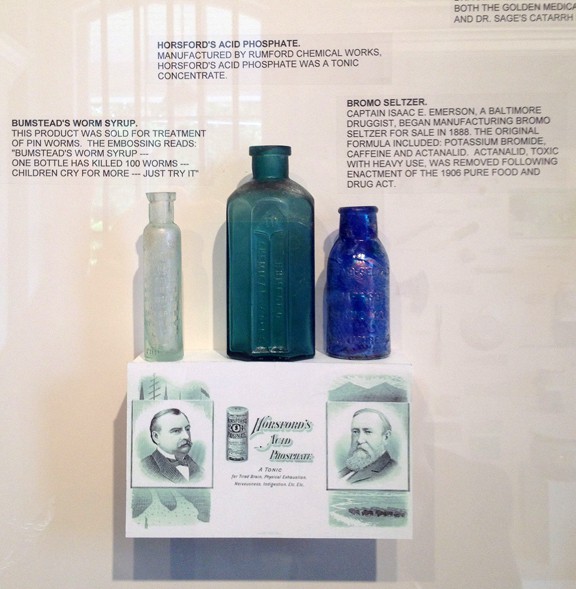 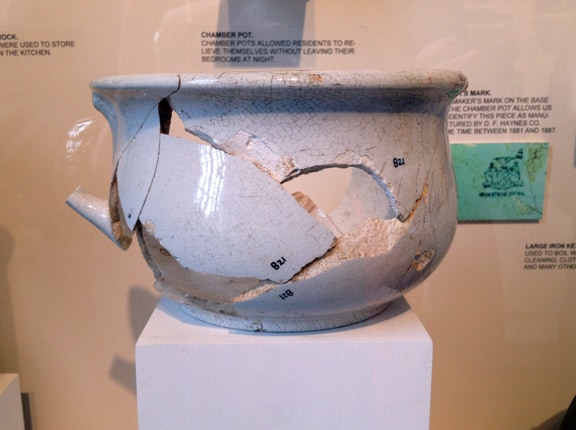 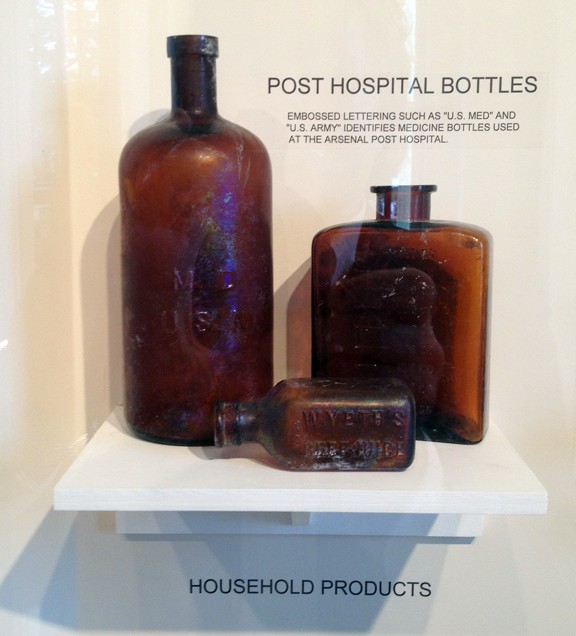 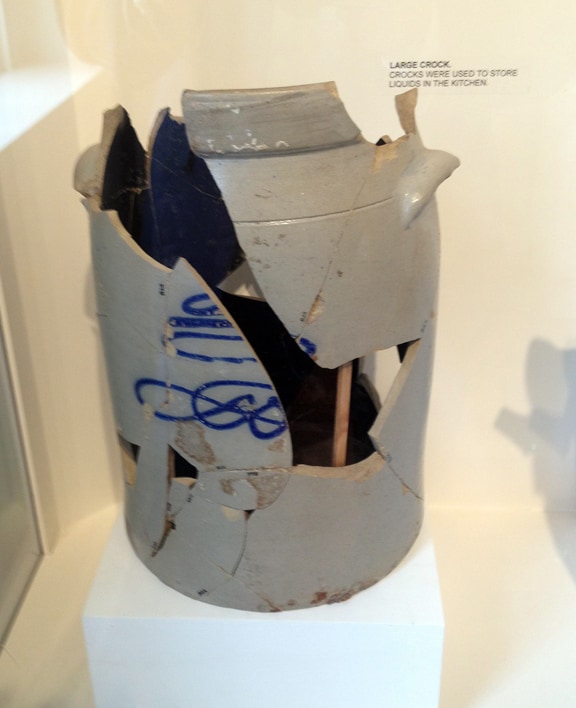 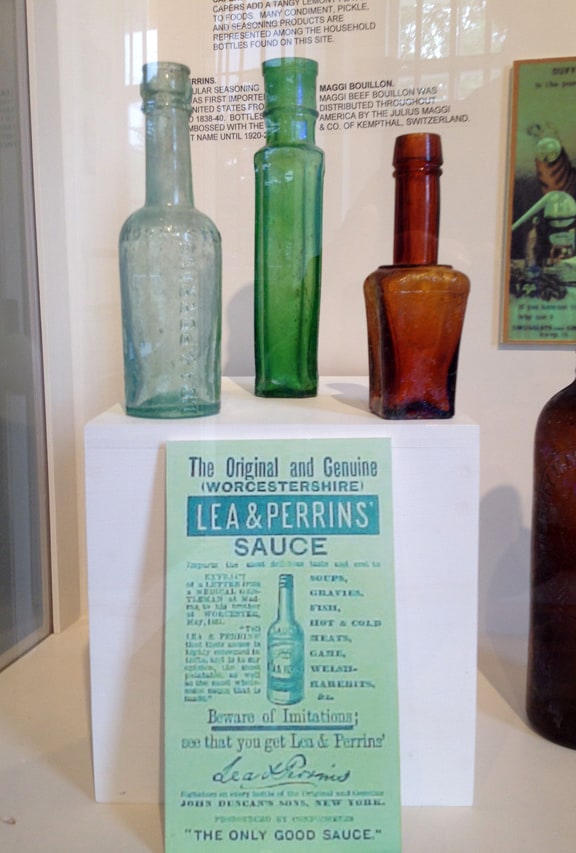 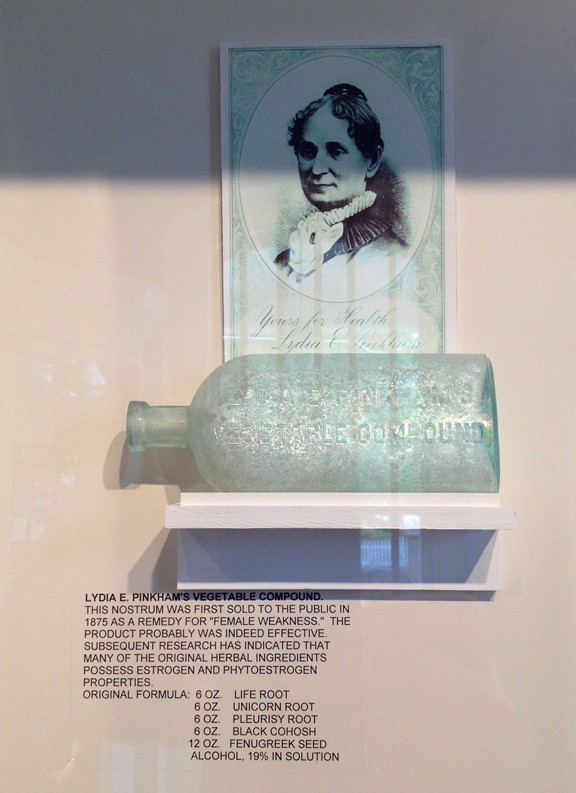 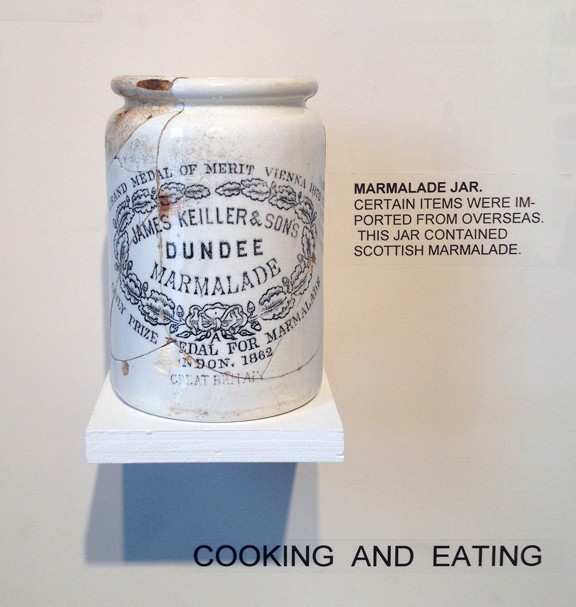 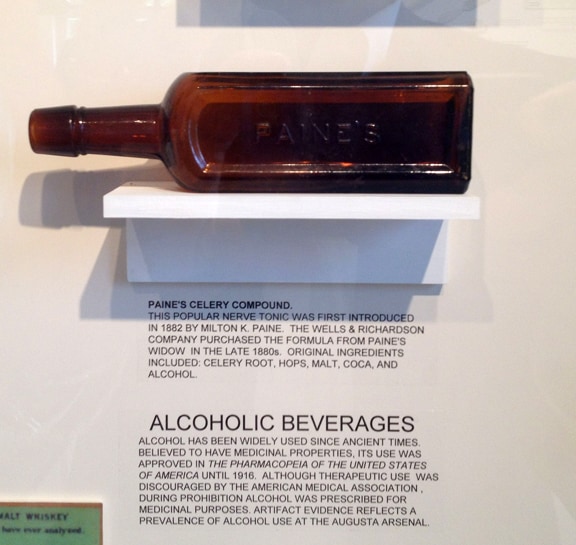 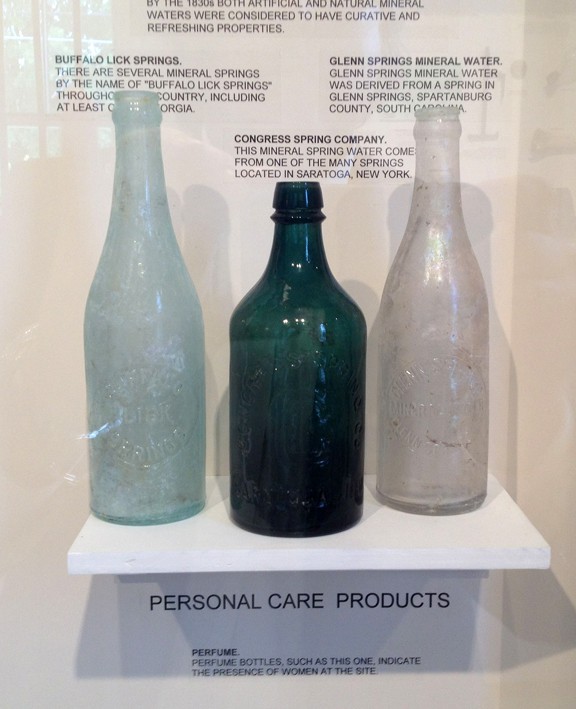 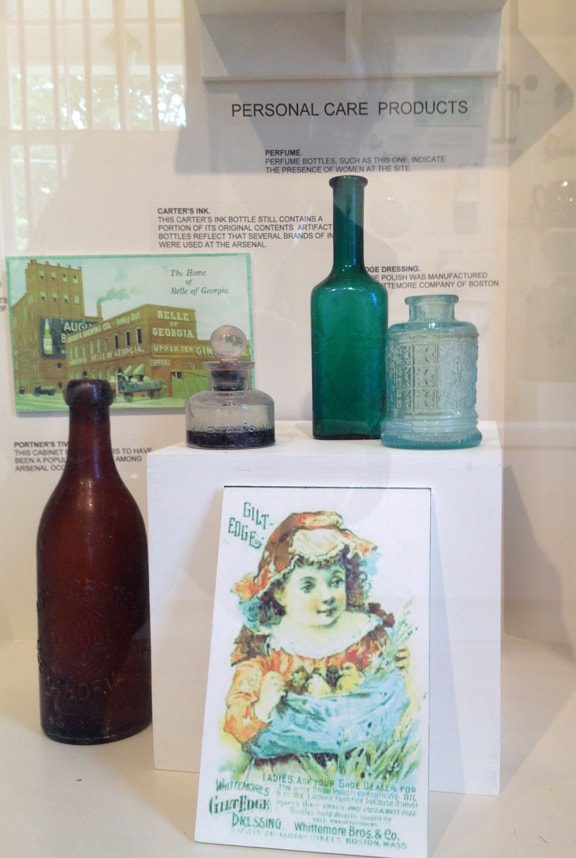 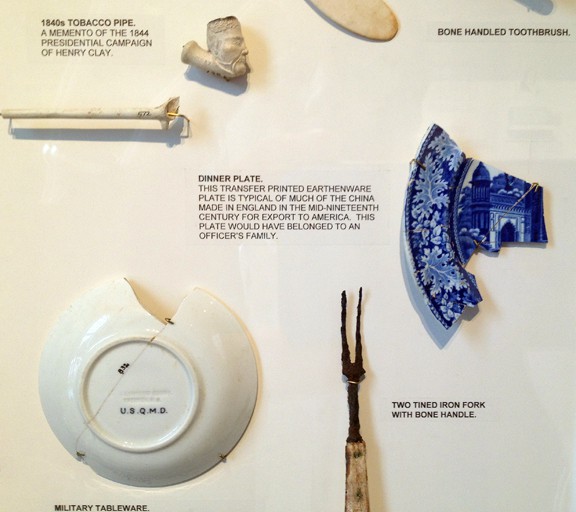 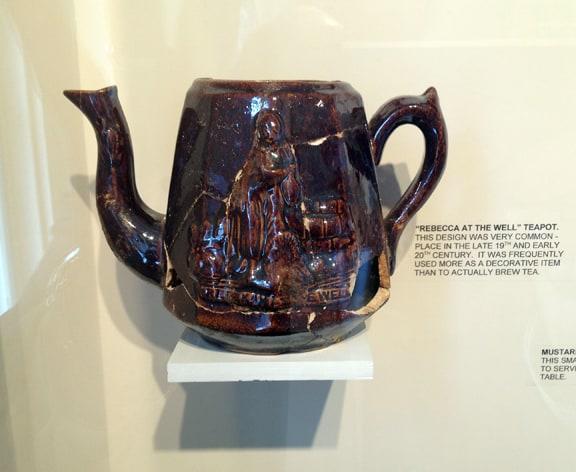 “Rebecca at the Well” Teapot

Ferdinand Meyer V is a native of Baltimore, Maryland and has a BFA in Fine Art and Graphic Design from the Kansas City Art Institute and School of Design. Ferdinand is the founding Principal of FMG Design, a nationally recognized design consultation firm. Ferdinand is a passionate collector of American historical glass specializing in bitters bottles, color runs and related classic figural bottles. He is married to Elizabeth Jane Meyer and lives in Houston, Texas with their daughter and three wonderful grandchildren. The Meyers are also very involved in Quarter Horses, antiques and early United States postage stamps. Ferdinand is the past 6-year President of the Federation of Historical Bottle Collectors and is one of the founding members of the FOHBC Virtual Museum.
View all posts by Ferdinand Meyer V →
This entry was posted in Civil War, Digging and Finding, History, Medicines & Cures, Museums, Stoneware, Utility Bottles and tagged Arsenal, ASU, Augusta Arsenal, Augusta State University, Civil War, Georgia, Guardhouse, History Walk, Matthew M. Payne, museum. Bookmark the permalink.