The Fancy Pontil and Fancy Cancel 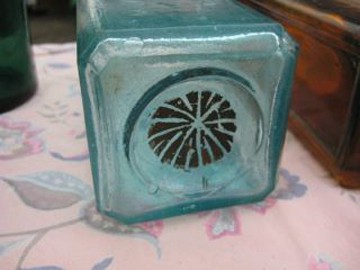 Tom Doligale posted this picture over at the Bottle Collectors Facebook Page of an ornately patterned pontil mark. The pontil pattern reminded me of cork carved fancy cancellation on an early United States postage stamps, an area of high interest to me.

[from Wikipedia] A fancy cancel is a postal cancellation that includes an artistic design. Although the term may be used of modern machine cancellations that include artwork, it primarily refers to the designs carved in cork and used in 19th century post offices of the United States. 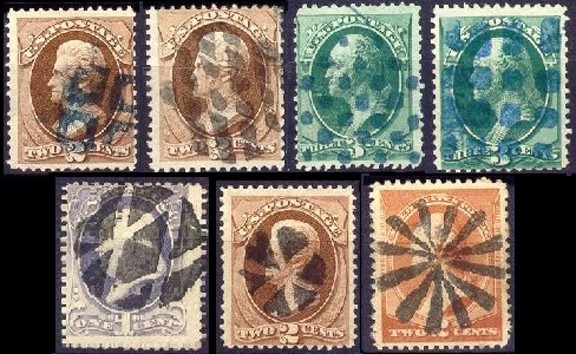 When postage stamps were introduced in the US in 1847, postmasters were required to deface them to prevent reuse, but it was left up to them to decide exactly how to do this, and not infrequently clerks would use whatever was at hand, including pens and “PAID” handstamps left over from the pre-stamp era.

A number of offices began to use cork bottle stoppers dipped in ink. These worked well, but would tend to blot out the entire stamp making it difficult to check the denomination, and so clerks began to carve a groove across the middle of the cork, making two semicircles. Further enhancements included two grooves cut crosswise (the four-piece “country pie”), and then two more, for the eight-segment “city pie”, and notches cut out off the outer edge to lighten the cancel further.

The carving process seems to have sparked the creativity of clerks across the country, and soon thousands of designs appeared, ranging from shields to skulls to stars, geometrical shapes, animals, plants, and devils with pitchforks. Among the most common fancy cancel designs are stars and crosses of varying designs. The Waterbury, Connecticut post office was the master of the practice, and turned out new cancels for every holiday and special occasion. Their “Waterbury Running Chicken” cancel, perhaps a turkey since it appeared close to Thanksgiving of 1869, was in use for only a few days and is now the most prized of all 19th century cancels, with covers fetching very high prices. 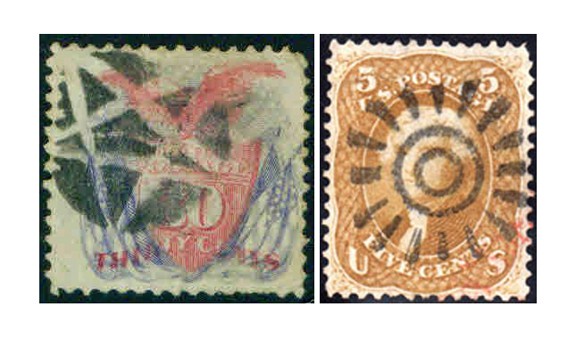 The era of fancy cancels came to an end in the 1890s, when the Post Office Department issued new regulations standardizing the form of cancellations.

The fancy cancels have since been studied and categorized by specialists. Many types are quite common, and command only a small premium, while others are rare. Not all have been discovered yet; previously unknown cancels continue to surface regularly. 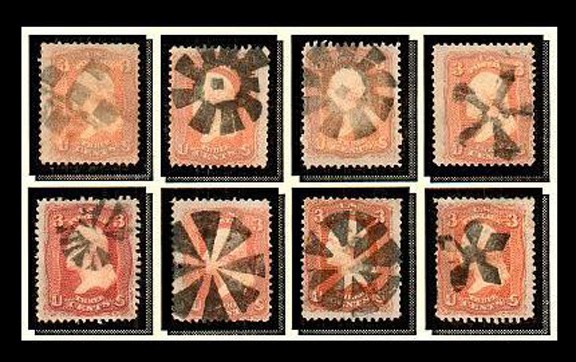 Ferdinand Meyer V is a native of Baltimore, Maryland and has a BFA in Fine Art and Graphic Design from the Kansas City Art Institute and School of Design. Ferdinand is the founding Principal of FMG Design, a nationally recognized design consultation firm. Ferdinand is a passionate collector of American historical glass specializing in bitters bottles, color runs and related classic figural bottles. He is married to Elizabeth Jane Meyer and lives in Houston, Texas with their daughter and three wonderful grandchildren. The Meyers are also very involved in Quarter Horses, antiques and early United States postage stamps. Ferdinand is the past 6-year President of the Federation of Historical Bottle Collectors and is one of the founding members of the FOHBC Virtual Museum.
View all posts by Ferdinand Meyer V →
This entry was posted in Art & Architecture, Ephemera, History, Tax Stamps and tagged cork, Fancy Cancel, pontil, postal, Tom Doligale, United States, US Postage Stamps. Bookmark the permalink.