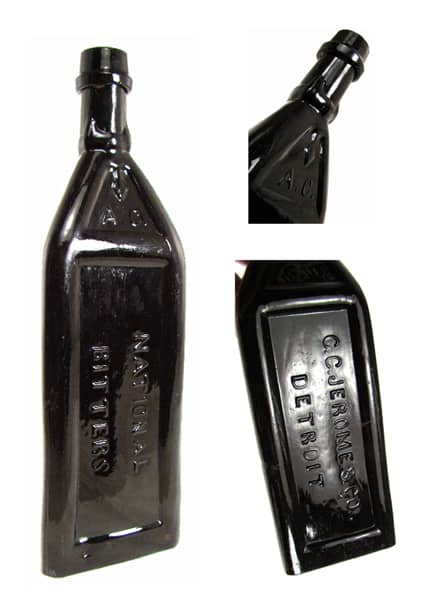 The bottle I watched most closely during the last Jeff Wichmann American Bottle Auctions, 15 May 2011 auction was the odd, triangular National Bitters from Detroit put out by C.C. Jerome & Company. It is pictured at the top of this post. An extreme rarity that I briefly touched on previously.

As written up by ABA:

Lot 209, embossed NATIONAL BITTERS C.C. JEROME & CO., DETROIT 1865 S.W. A.C. on shoulder. Applied top and smooth base. Here is a bottle that strays from its typical shape and variant. The examples we had seen or heard of were a coffin shaped variant that was primarily seen in amethyst. That is if you had a chance to ever see one. Ring-Ham lists this bottle as N-9 in black amethyst, which is very aptly described. It is 10 ½” tall and triangular. You would think there would be a pontil mark, however, there isn’t. This bottle is extremely dark and looking through the mouth, once can see areas of purple in the corners of the base. This bottle was purchased by a young man in the army in the 1940’s in Detroit and has been in his collection ever since. As for condition there is a 1/3” flat flake midway up the edge to the left of the Jerome panel. There is also a tiny flake on the inside unembossed panel side. It is barely seen, as it doesn’t interrupt the transition or form of the lip. On the Jerome panel about half way up there is a line the diameter of a strand of hair that travels from the flat flake. Having said all this, with such a deeply colored bottle it’s extremely hard to see. The glass is extremely crude overall with areas of waviness and very uneven texture making it even harder to believe there’s no pontil. At any rate, this is a surely a bottle for the advanced collector and not for everyone. As for a grade, we’ll just leave it at the description and hope you take a look at the video. There is no minimum bid on this bottle. Est. $10,000-$20,000. Winning Bid: $11,500.

I did not get this bottle and was caught sleeping. I am curious, and this did hold me back as far as being aggressive, what was that line running across the bottle? 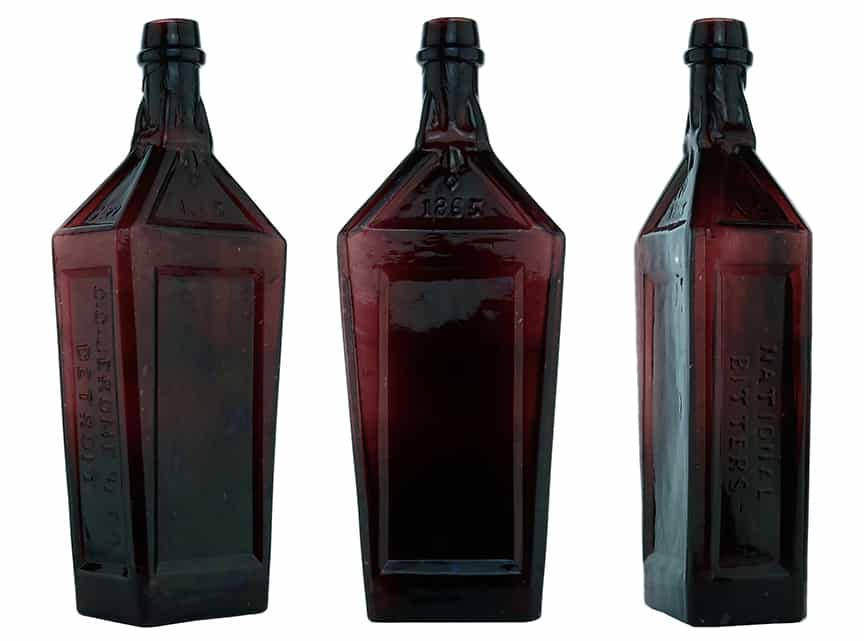 The other National Bitters referenced above in Jeff’s auction write-up is the coffin-shaped bottle embossed “National Bitters, C.C. Jerome & Co., Detroit, A.C.-S.W. 1865” in rich amethyst which is pictured above and below. It is the only known example. The top picture is from the FOHBC Virtual Museum. This example sold for around $13,000 in 1990 out of the Cris Batdorff collection and recently sold for a rumoured $150,000. This bottle is pictured below. 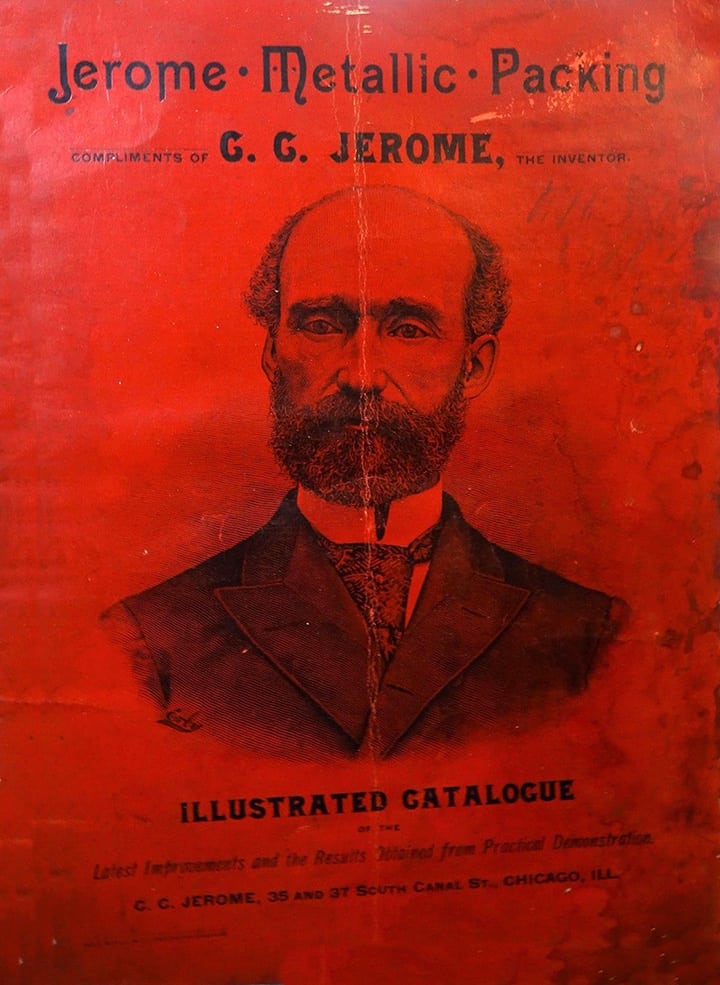 Charles C. Jerome was best known in railway circles as the inventor of Jerome Metallic Packing. Jerome was born in 1833 in Canada, and in his early days studied medicine in Toronto. He practiced medicine for a time at Port Huron, Michigan and entered the Civil War as surgeon in a Michigan regimen. In Detroit in 1865, Jerome was located at 32 Woodward Avenue where he put out his National Bitters in two different bottles. He said the bitters had already been in use for some thirty years and said you could buy it from druggists and liquor dealers nationwide which was a stretch. It must have been a limited run as only three examples exist (one coffin and two triangular). He also used cryptic letters, “S W 1865 A C” in his advertising. You see this with many bitters. I can not imagine a person buying a medicine, that is supposed to make you better, in a coffin-shaped bottle. Not such a good idea that might explain why only one example exists. Maybe this was a phototype.

After the close of the war, Jerome remained at Port Huron until 1869 when he came to Chicago, where he accumulated a considerable fortune. In 1880, he became interested in the business by which he is best known and conducted the business in a way that yielded large returns and made Jerome Metallic Packing widely known. Jerome was well-known among railroad men of the west as his product was used in many steam engines of that time.

Jerome was also known among doctors as the inventor and manufacturer of the Chicago Sanitary Flour. Additionally, he invented the Jerome Horse Shoe which was used by many owners of fast horses.

Jerome died in Nauheim, Germany in 1901, where he had gone with his wife. The illness which resulted in Jerome’s death is said to be brought on by exposure during the trip across the Atlantic. He left a wife and three children, among them George C. Jerome, who later ran the Metallic business. 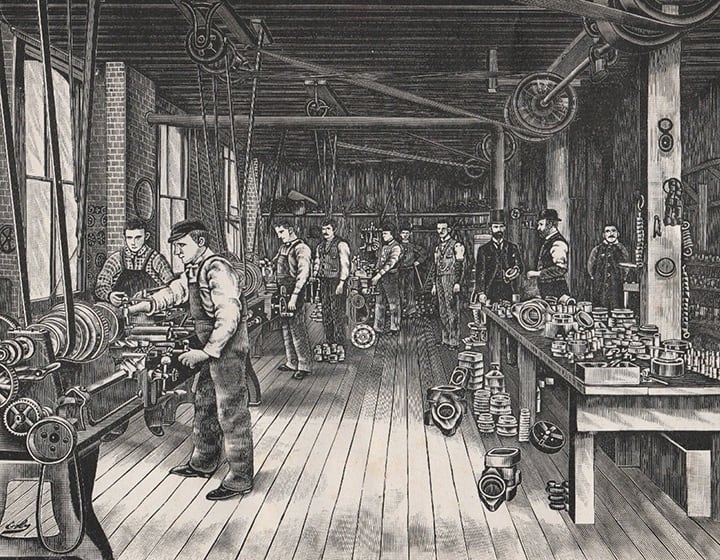 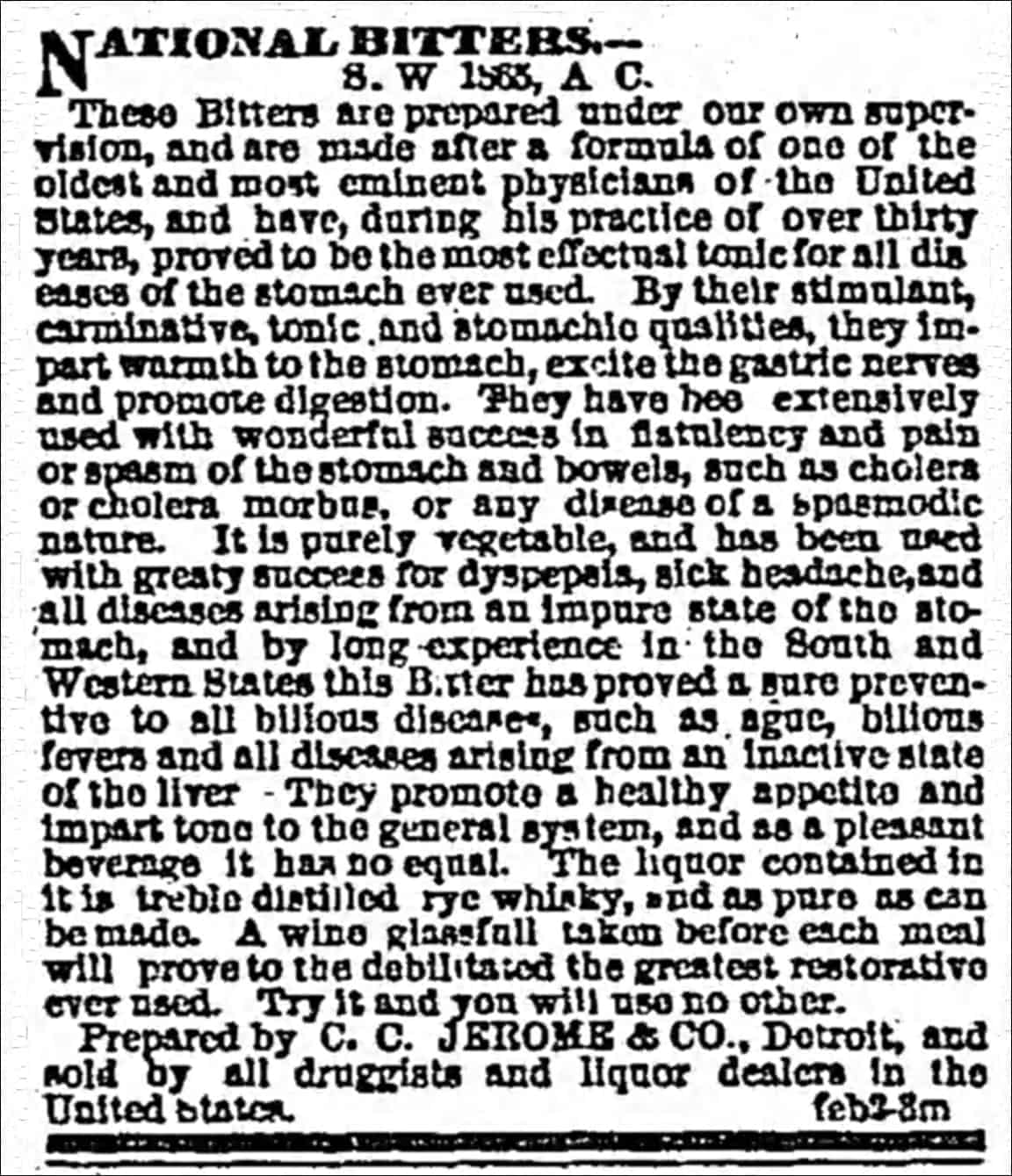 1878: Patent 211,299. STUFFING – BOXES FOR STEAM – ENGINES. Charles C. Jerome, Chicago, 111. Filed Dec. 16, 1878. To all whom it may concern: Be it known that I, CHARLES C. JEROME, of Chicago, in the county of Cook and State of Illinois, have invented certain new and useful Improvements in Stuffing-Boxes and Packing for Steam-Engines; and I do hereby declare the following to be a full, clear, and exact description of the invention, such as will enable others skilled in the art to which it pertains to make and use it, reference being had to the accompanying drawings, which form part of this specification. – 1879 United States. Patent Office 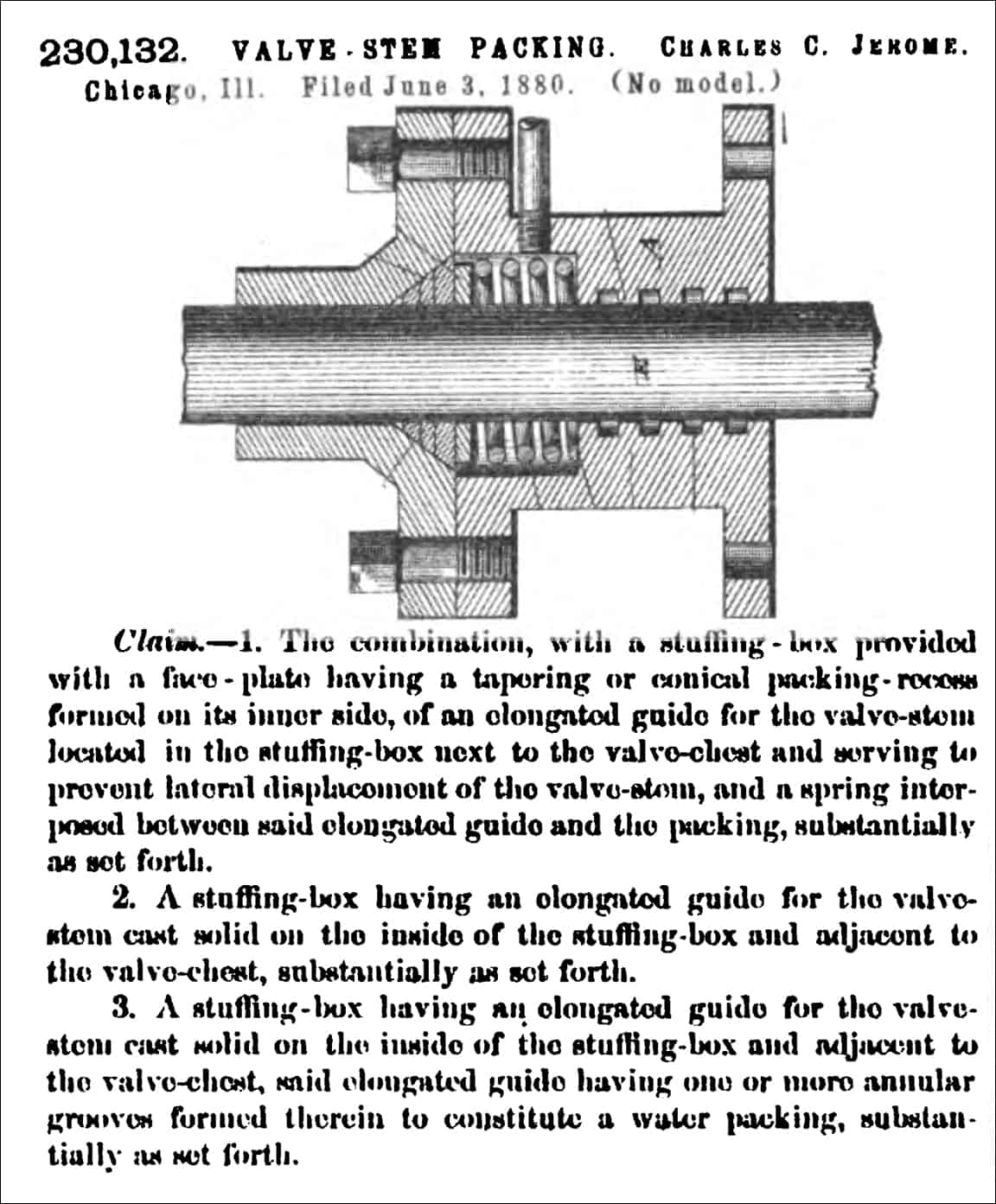 1898: Trademark: 31.923. Medicinal Preparation in the Form of a Flour for Certain Disorders. Charles C. Jerome, Chicago, 111. The representation of an eagle holding an angular package in his claws. – The Pharmaceutical Era, Volume 20, 1898 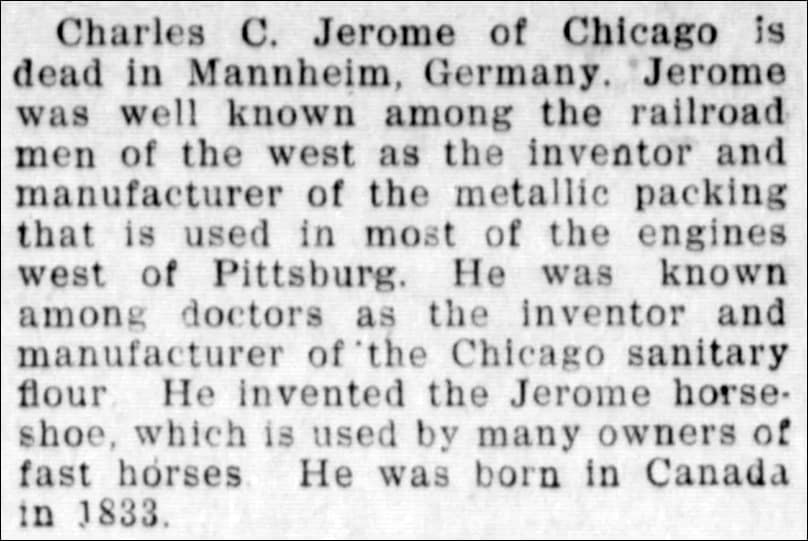 Ferdinand Meyer V is a native of Baltimore, Maryland and has a BFA in Fine Art and Graphic Design from the Kansas City Art Institute and School of Design. Ferdinand is the founding Principal of FMG Design, a nationally recognized design consultation firm. Ferdinand is a passionate collector of American historical glass specializing in bitters bottles, color runs and related classic figural bottles. He is married to Elizabeth Jane Meyer and lives in Houston, Texas with their daughter and three wonderful grandchildren. The Meyers are also very involved in Quarter Horses, antiques and early United States postage stamps. Ferdinand is the past 6-year President of the Federation of Historical Bottle Collectors and is one of the founding members of the FOHBC Virtual Museum.
View all posts by Ferdinand Meyer V →
This entry was posted in Auction News, Bitters, Figural Bottles, History, Medicines & Cures, News and tagged American Bottle Auctions, C.C. Jerome, Charles, Chris Batdorff, coffin, Detroit, engine, Jeff Wichmann, Jerome, metallic, National Bitters, Patent, purple, sandor fuss, steam, stuffing, triangular. Bookmark the permalink.