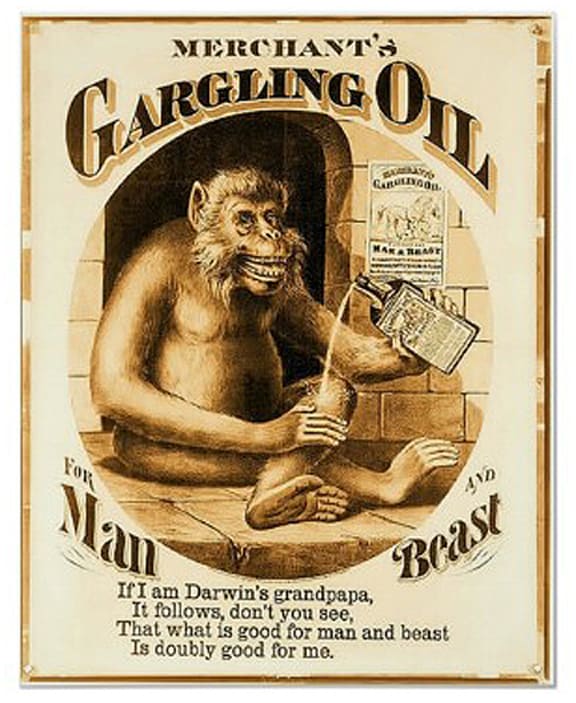 A couple of paths converged last evening and pointed to developing this post for Merchants Gargling Oil. The first was when I was looking at Marianne Dow’s great images of monkeys (see above) in bottle advertising on Just Monkeying Around and the second was when I was admiring a picture by Dave Kam at Early American Glass on facebook (see below). 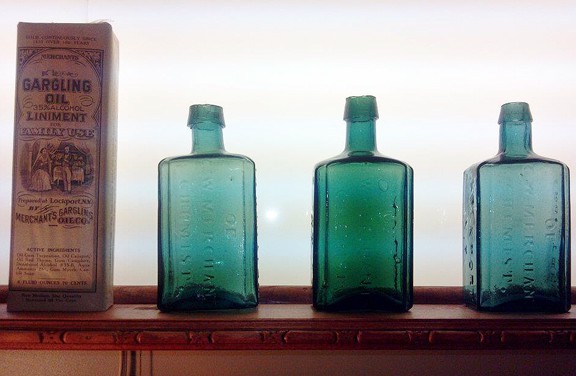 “Good for Man and Beast”

I have always liked the color, shape, typography and name of these bottles as I find my eyes pleasantly resting every time on a Merchant’s bottle whether it is at a bottle show or pictured at an online auction. As with many brands, I am drawn by the name and in this case “Gargling Oil” and the slogan “Good for Man and Beast”. I mean who would gargle with oil and who would take medicine that animals used too! Well, this prompted a little look at Dr. George Merchant, his products and methods of advertising. 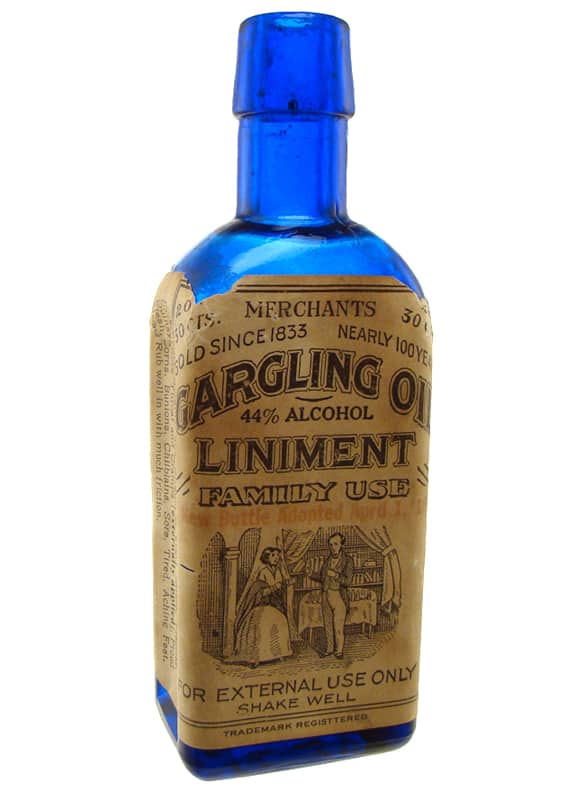 Yellow Wrapper for Animal and White for Human Flesh.

“Whether for use on man or beast, Merchant’s Gargling Oil will be found an invaluable Liniment, and worthy of use by every resident in the land. We know of no proprietary medicine or article now used in the United States which shares the good-will of the people to a greater decree than this. Yellow wrapper for animal and white for human flesh.”– New York Independent

From C. T. Dale & Co. Mortonsville, Kentucky – “We sell about twenty bottles of Gurgling Oil where we sell one of any other liniments, and in the last year we have bought and sold more than any year previous”.

From Dr. J. P. Terrell, March 3, 1856 – “I am engaged in the practice of medicine, and find your Gargling Oil an extremely efficient remedy in all cases where an external application is indicated”.

We are now, and have been for some years, preparing the Oil free from stain, to be used as a common Liniment for human flesh, extracting the coloring ingredient which has heretofore rendered it objectionable. This Oil possesses all the medicinal properties of that prepared with the dark tinge for horses and cattle, and will be found one of the best remedies for all purposes where a liniment is required that has ever been manufactured.

Merchant’s Gargling Oil is a diffusible stimulant and carminative. It can be taken internally when such a remedy is indicated, and is a good substitute for pain killers, cordials and anodynes. For Cramps or Spasms of the Stomach, Colic, Asthma, or Internal Pain, the dose may be from fifteen to twenty drops, on sugar, or mixed with syrup in any convenient form, and repeated at intervals of three to six hours.

Merchant’s Gargling Oil (no, the horse or person did not have to gargle it) could trace its pedigree to 1833 Philadelphia, though it was manufactured in Lockport, New York. The first incarnation of the liniment was intended to cure almost any illness that could befall a domestic animal. The form intended for human use was not introduced until 1875. Four years earlier Merchant’s Vegetable Worm Tablets had made their appearance. Merchant’s Gargling Oil was then made in two versions, one for animals and one for people. The ointment for animal ailments was intended for surface wounds and skin ailments common to horses, cattle, sheep and poultry. A topical ointment was also made for human skin problems. Neither product was intended for internal use, despite the product name of gargling oil. 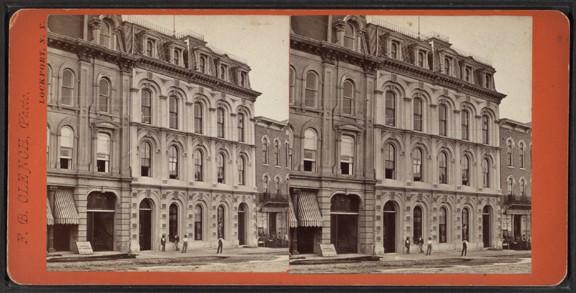 The Merchant’s Gargling Oil Company of Lockport, New York was founded by Dr. George W. Merchant, a druggist, in 1833, and initially sold to drivers of horses and mules alongside the Erie Canal. Dr Merchant started out in “Lower Town” and moved to “Upper Town” in 1836. Dr. Merchant shrewdly marketed with the slogan “Good for Man and Beast”. By the end of the 19th century the product was sold worldwide and company was one of Lockport’s main industries. George W. Merchant sold the business to M.H. Tucker around 1855. John Hodge joined the company as a teenager, and was elected Secretary when M.H. Tucker & Company was incorporated in 1858. Hodge married one of Tucker’s daughters and gained control of the company in 1865 when Tucker died. Overall, Merchant’s Gargling Oil lasted almost 100 years, going out of business in 1928 when the factory finally burned down. The company ownership changed hands at least 3 or 4 times in the 19th century. 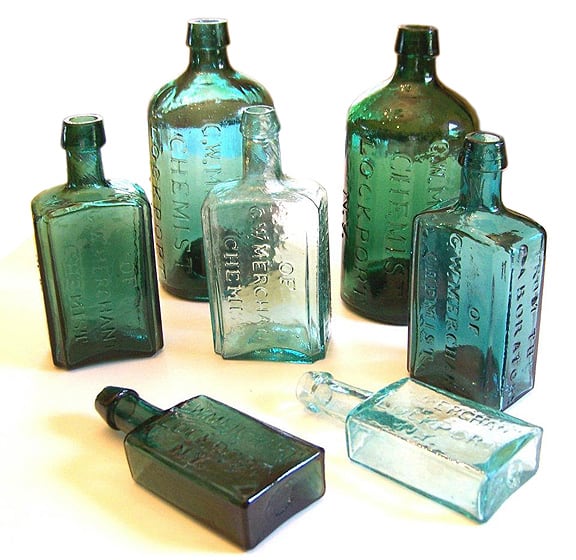 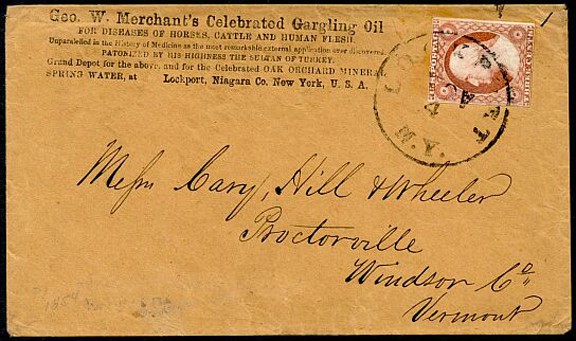 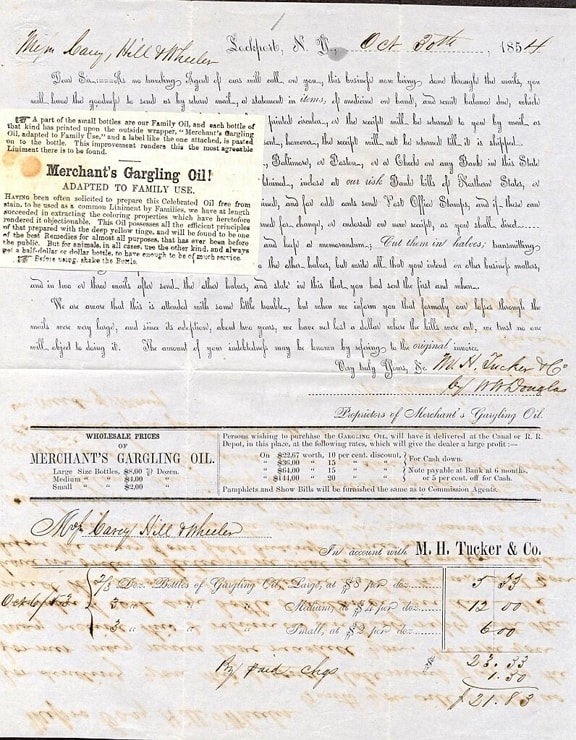 The contents of the cover pictured above, asking for payment of an 1853 bill and showing the wholesale product prices – rdhinstl’s Page 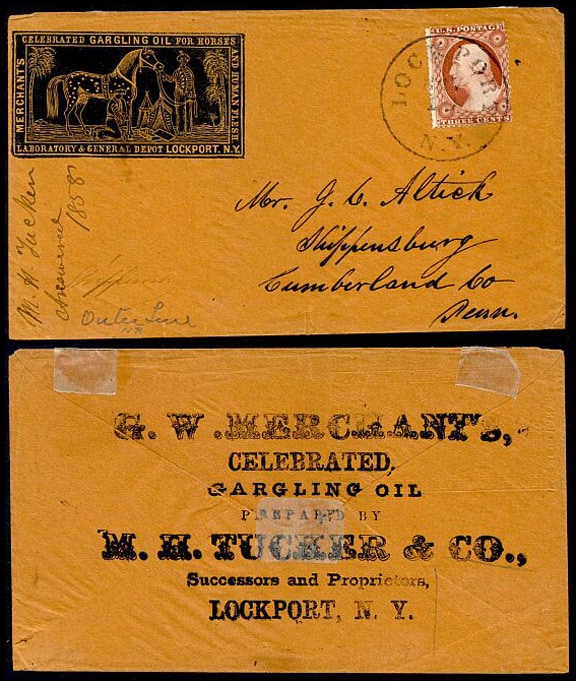 An ornate corner card on an 1858 cover from Merchant’s. Wording on the back reflects the purchase of the product by H.M. Tucker, which occurred around 1855 – rdhinstl’s Page 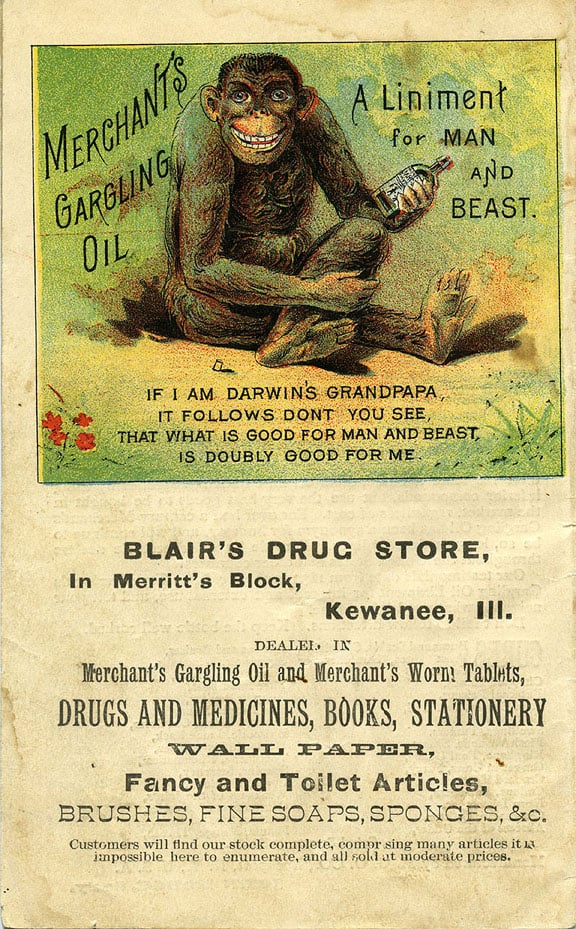 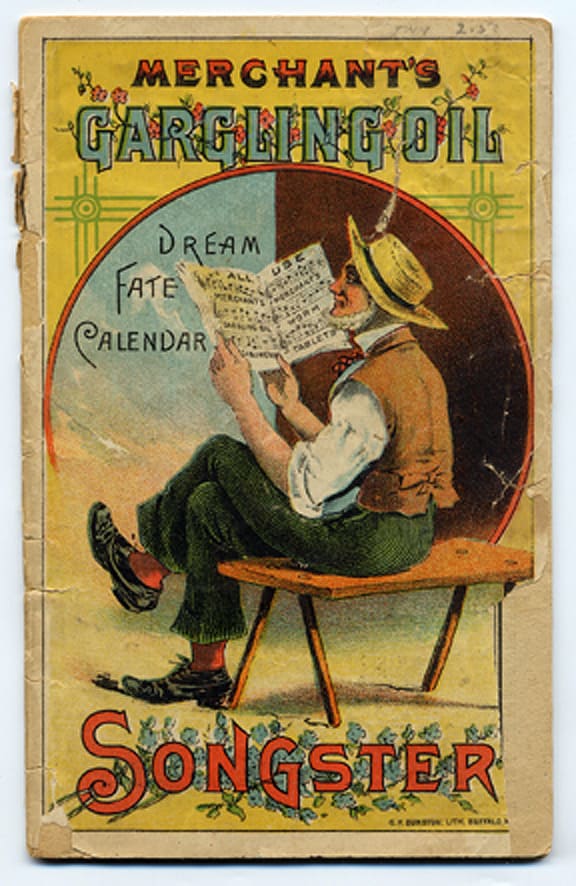 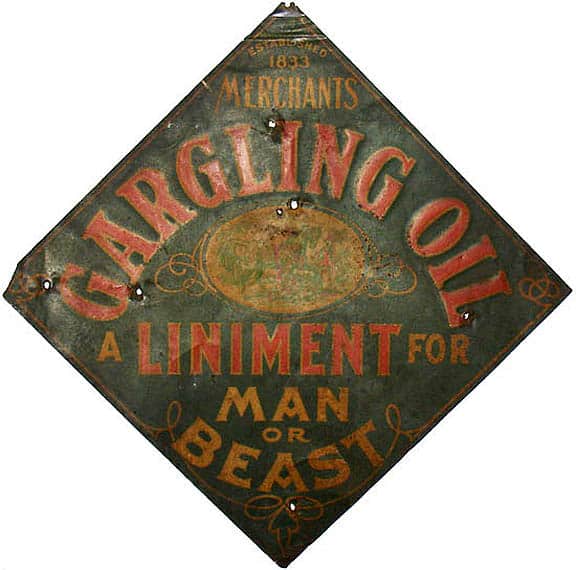 Colored embossed tin advertising sign for the patent medicine Merchant’s Gargling Oil. It bears the company’s whimsical slogan, “A Liniment for Man or Beast. Established 1833.” An illustration in a central oval in the sign shows the product being applied to the leg of an Arabian stallion by Turkish groomsmen, a scene related to a publicity stunt conceived by Morris Tucker, a partner in the company. Tucker sent a dozen bottles in a satin-lined oak box as a gift to the Sultan of Turkey and announced it to the American press, which ran with the story, boosting sales, even though the sultan never acknowledged receiving the gift. Thereafter, the company decorated its packaging of gargling oil for animals with this picture. – George Glazer Gallery 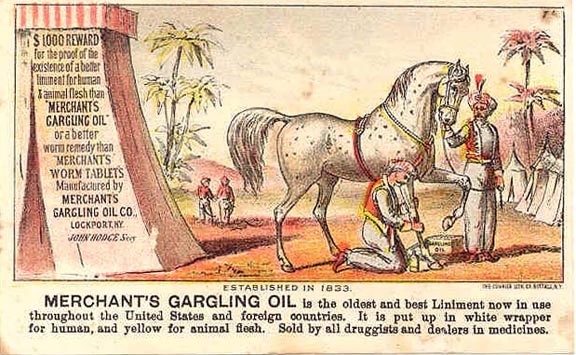 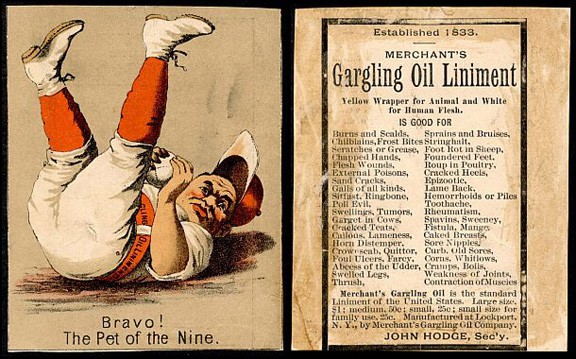 This trade card could have been used between the time John Hodge was elected Secretary of M.H. Tucker & Company in 1858 and when he took control of the company in 1865. However, it appears that Hodge did not take a different title until well after he took control, so the card may be from the 1870’s – rdhinstl’s Page 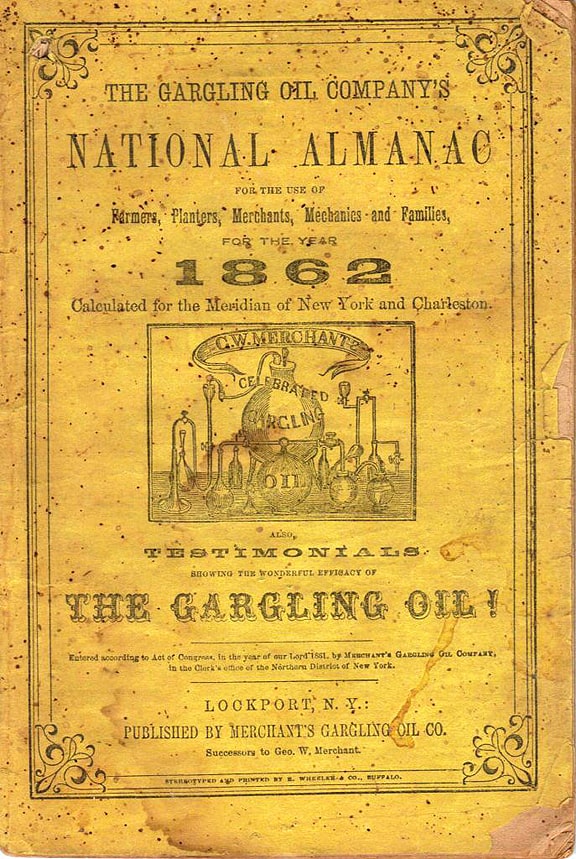 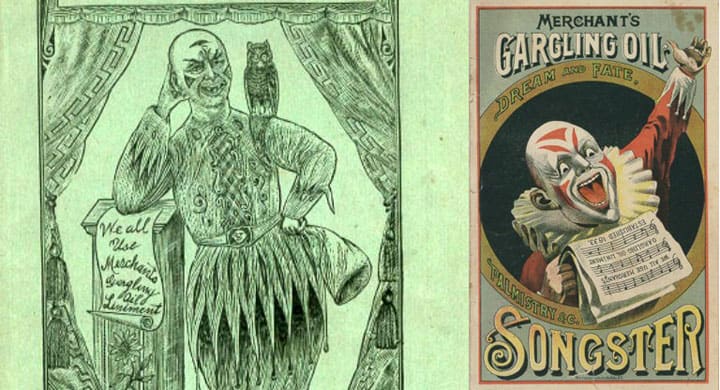 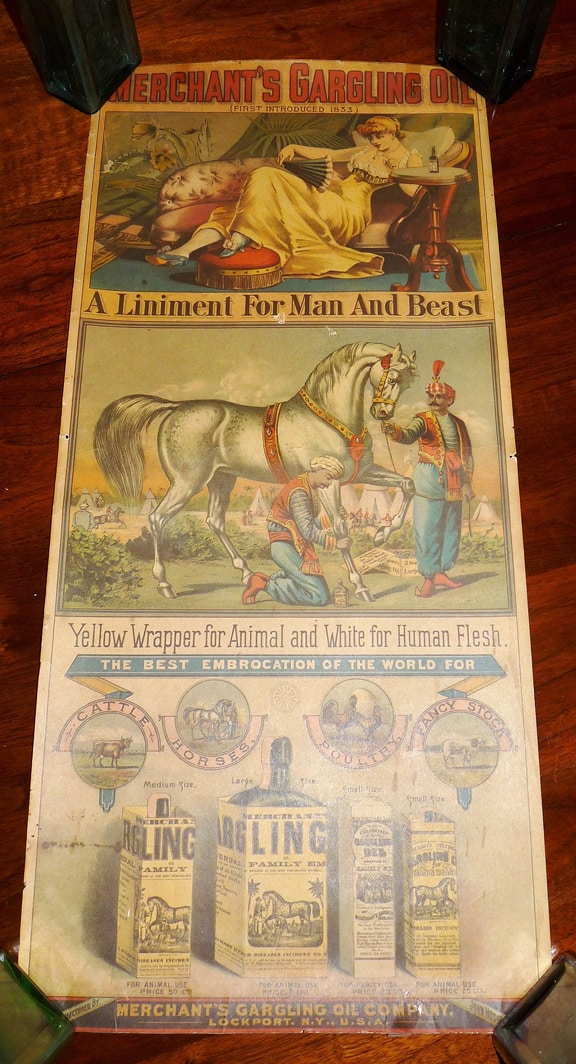 This is an old piece you don’t see too often, and great color and condition. Guess I’m in the market for a frame now. That is four large size Gargling Oils holding down the corners. This is a big piece. – Dave Kam

1847 Ad for Merchant’s Gargling Oil.  Product was sold in a white wrapper for Human use and a yellow wrapper for Animal use – Matt’s Collectibles Antique Medicines