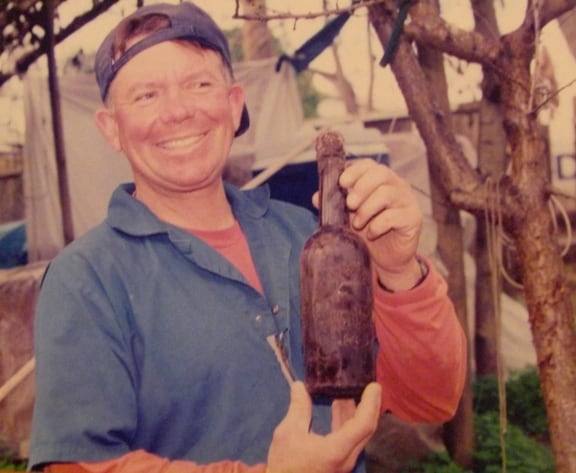 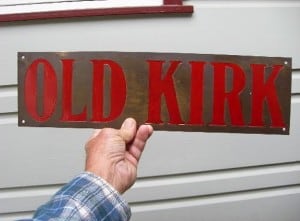 Michael Dolcini is an interesting character. To me, he seems to know just about everything, and has ‘been there and done-it’ with western bottles and glass. He passes off his knowledge in a very unassuming and casual way that always makes me smile and think ‘now how did he know that’?

Mike has been around awhile, participated in many important digs and has collected just about everything western at one time or another. I thought I would post a few of the advertising pieces Mike has written about in the past few years over at Western Glob Top Whiskies and more recently on facebook. 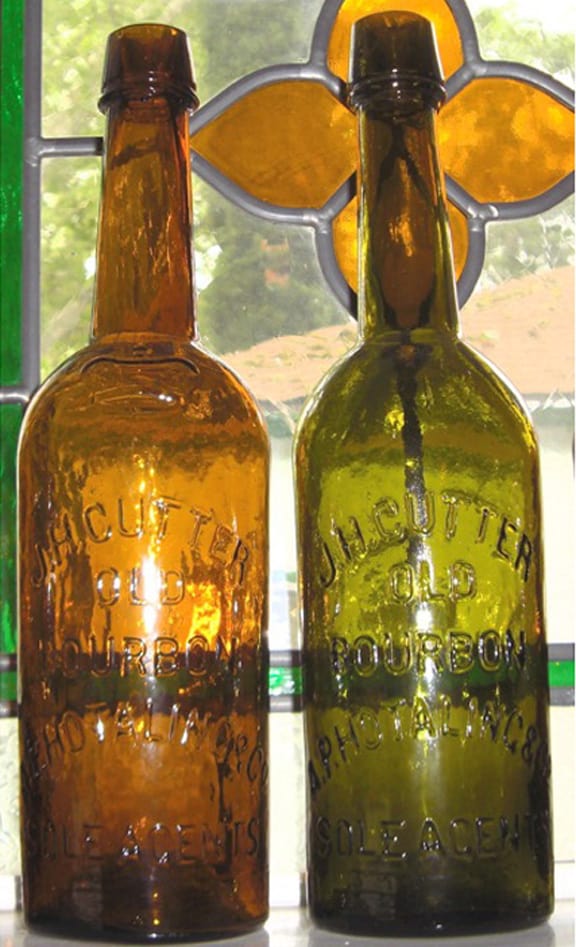 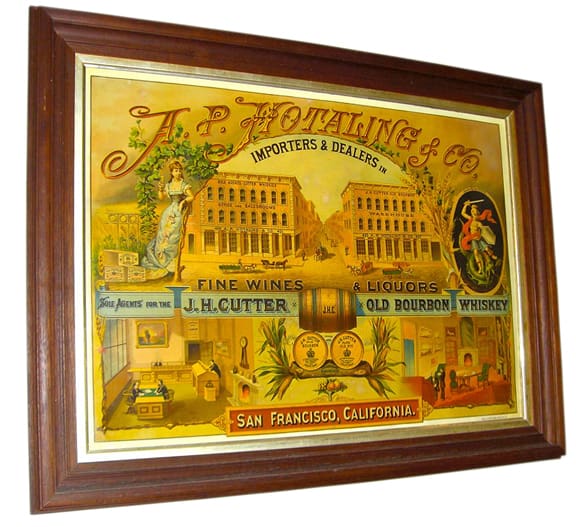 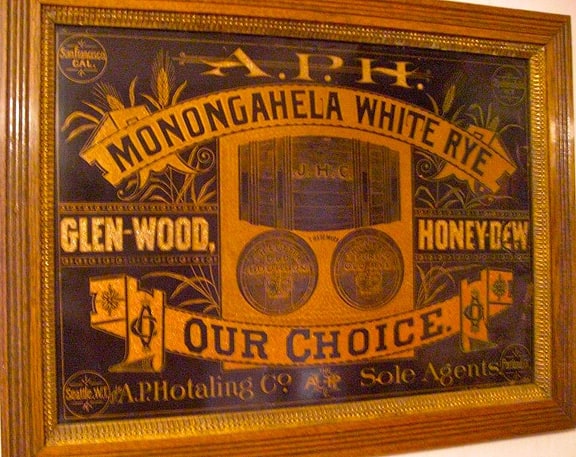 Sent unprotected to a saloon in Mt. Vernon, W.T. The address is painted on the back in white. Most likely mid to late 1870’s. Hand done tin with black background and silver, copper and brass sprinkles over some of the gold lettering. Manufactured by Townsend & Hostetter Co, Chicago. How’s that for a tin sign making outfit? – Michael Dolcini 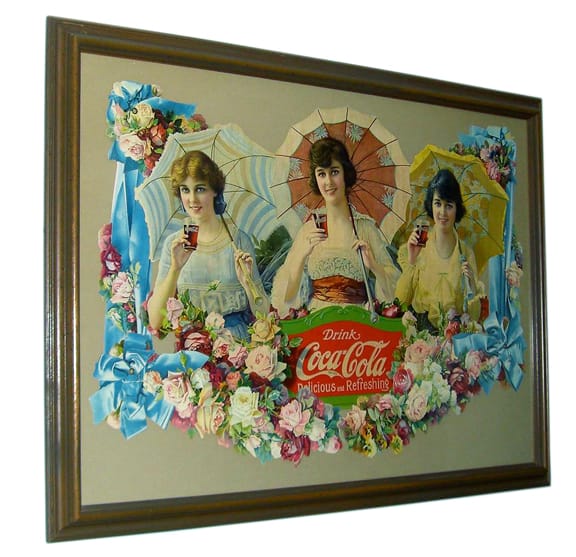 Original 1918 Coca Cola festoon that originally hung in a Ione, California soda fountain. I bought it from the owner some 38 years ago. – Michael Dolcini 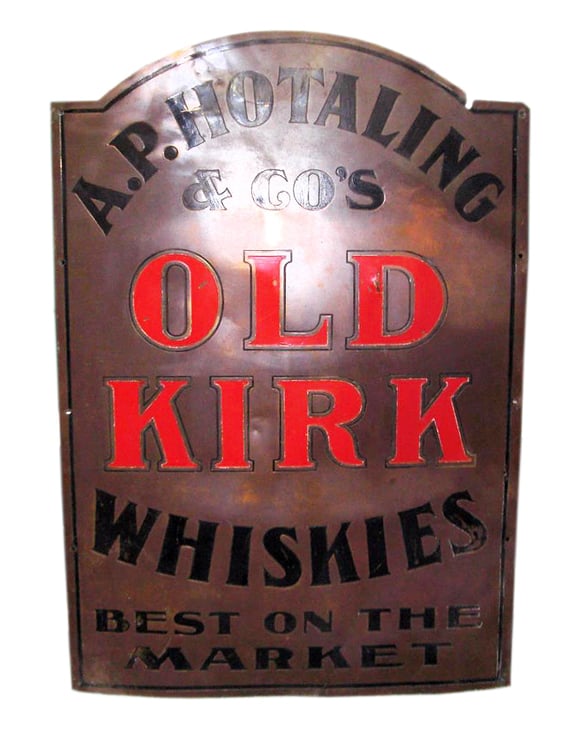 At one time it was sort of shiny, but being outside for 10 years has dulled it some. It came from a privy, believe it or not. Originally it was curved with a wooden frame behind. – Michael Dolcini 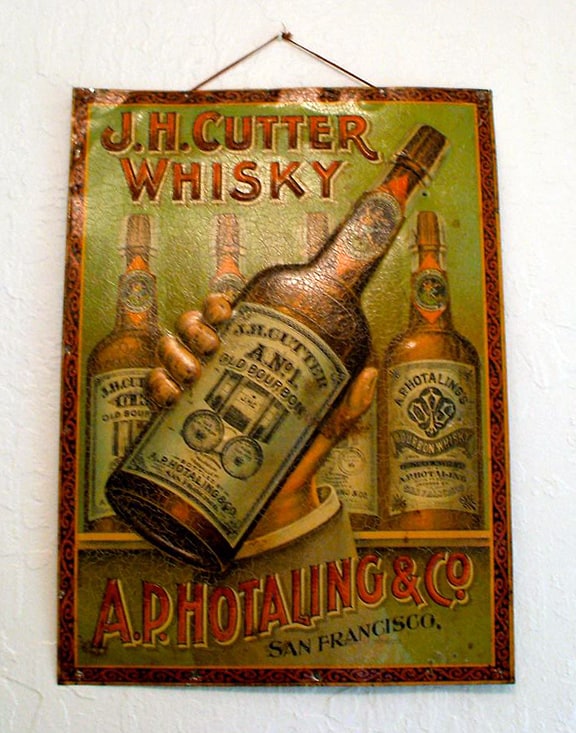 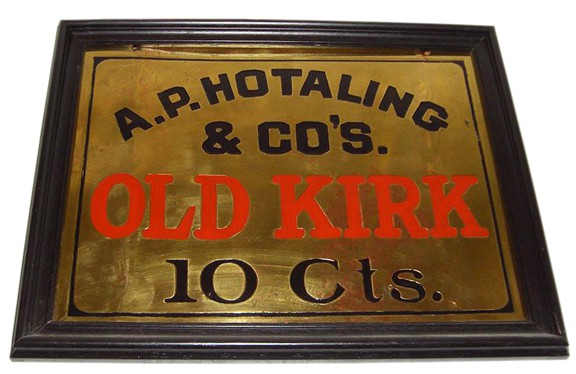 OK, here is a Old Kirk brass sign that is inside the house. It was a strange story how I came to have it. My Line crews were stringing new conductors on a transmission circuit in San Jose, CA, and I was walking down the right of way that paralleled the SPRR tracks. As I walked along I just happened to notice this sign bent around a RR tie next to a gravel area. It was painted NO PARKING but I could clearly see the letters from 10 ft away. I went back, got my PU and used a pry bar to “reclaim” it. I straightened it out at home, stripped the green paint, polished it up, and filled in the letters with modeling paint. It’s been like that for over 20 yrs and ain’t goin‘ anywhere. – Michael Dolcini 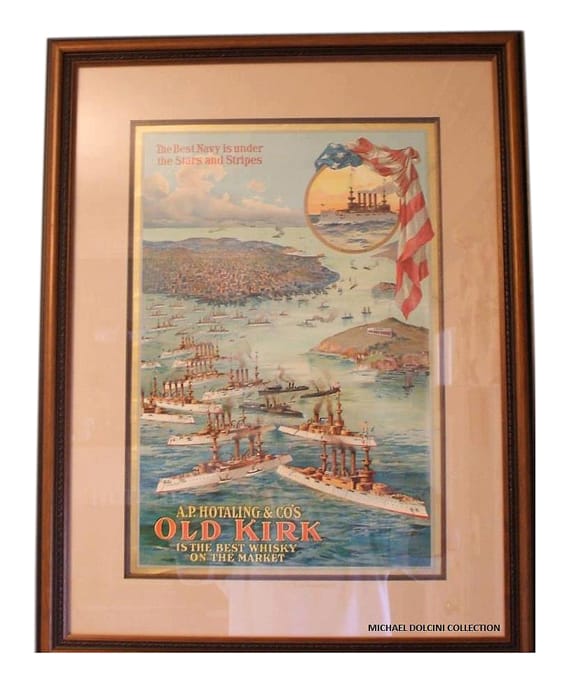 Navy’s peacetime color scheme, decorated with gilded scrollwork with a red, white, and blue banner on their bows. These ships would later come to be known as the Great White Fleet. They visited San Francisco from May to July, 1908. – Dolcini Collection 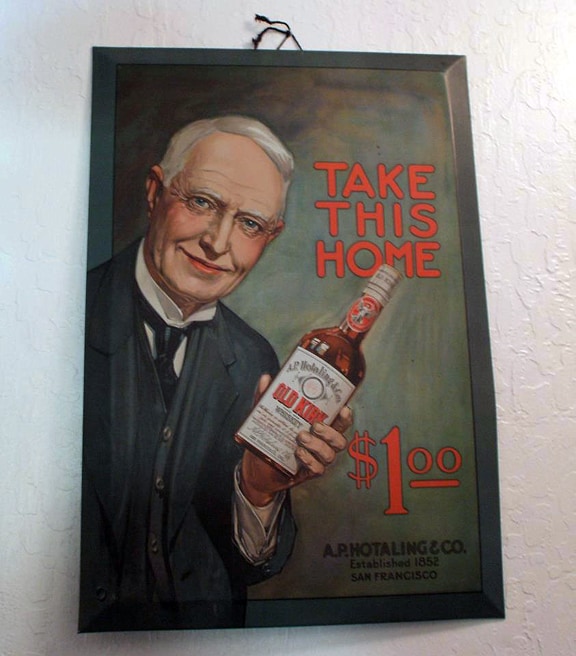 The A.P.Hotaling Co sold the rights to the J.H.Cutter Whiskies to Sherwood and Sherwood in 1903. After that their principal seller was the Old Kirk Whiskey, a proprietary brand solely owned by them. Old Kirk was the company’s mainstay until 1918, when prohibition caused the retail sales of liquor to cease. Old Kirk was heavily advertised, with numerous tin, paper and brass signs made to aid in promoting the product. This beveled edge tin is an example of that form. No woman here, it’s a man showing the bottle. – Michael Dolcini 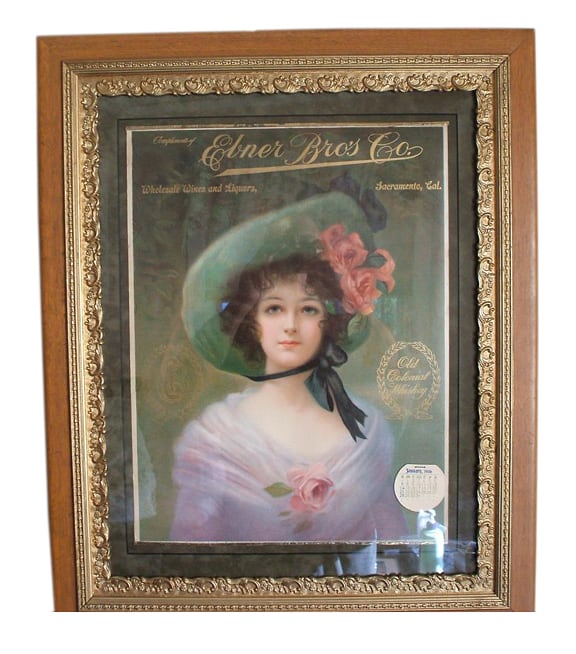 Life is too short for ugly women on advertising. Ebner Bros bottles are common, but the ads are definitely not. To the best of my knowledge this is the sole surviving 1906 Ebner Bros calendar. – Michael Dolcini 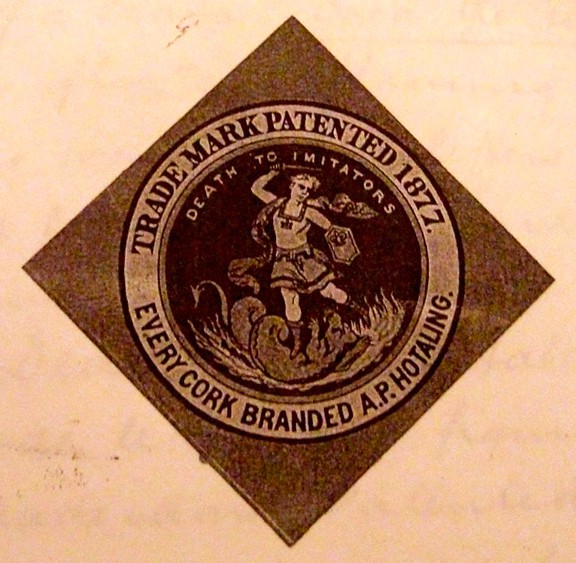 “Death To Imitators” used by A.P.Hotaling on his advertising and bottles. This is the neck label used on all of his whiskey bottles. – Michael Dolcini 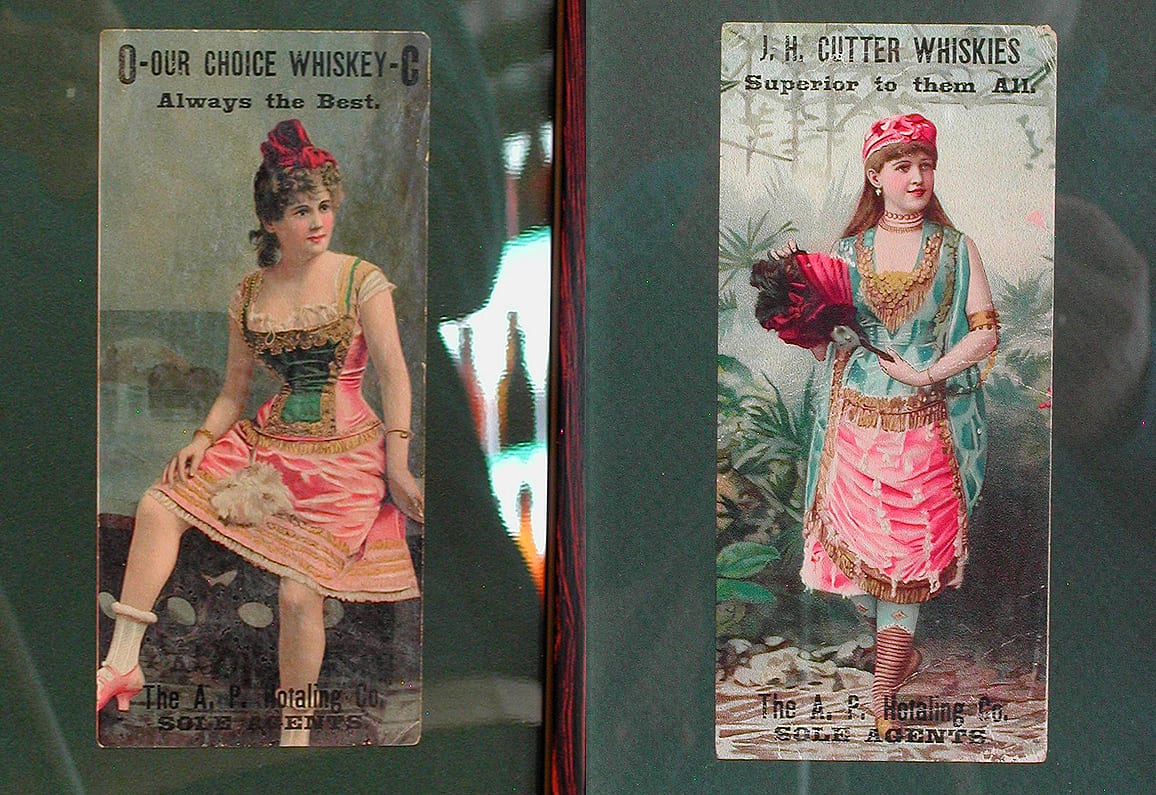 Cutter Whiskey Advertising Pieces – This advertising piece was purchased at the Auburn Bottle Show 12/08 advertising J.H. Cutter Whiskies Superior to them all. The A. P. Hotaling Company Sole Agent and I found the twin piece on e-bay in a group of paper items in March of this year. I think they both originated from the Oregon/Washington area. 7inches x 3.10 inches each. – Michael Dolcini 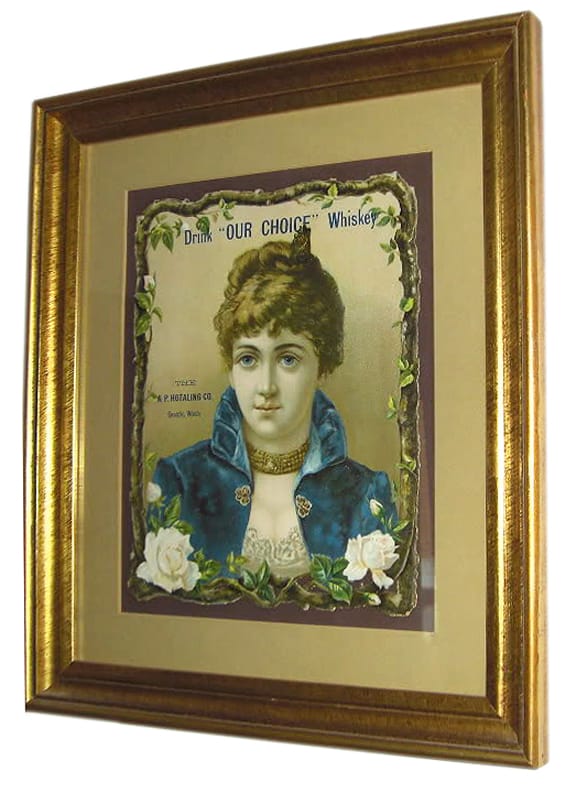 Hotaling Advertising – Though not directly advertising Cutter Whiskey, this is a related sign because it was given out by the A.P. Hotaling Co., of Seattle, Washington. This embossed cardboard piece, dates from around 1890, a few months after Washington became a state. At that time, the lovely girls associated with later advertising had not reached their epitome, so this young lady is rather “owlish” in appearance. Women were just beginning to be the subjects of commercial advertising and the models hadn’t developed to the point reached a decade later. Nevertheless, this is another sole surviving piece of Hotaling‘s ventures into the Pacific Northwest. – Michael Dolcini 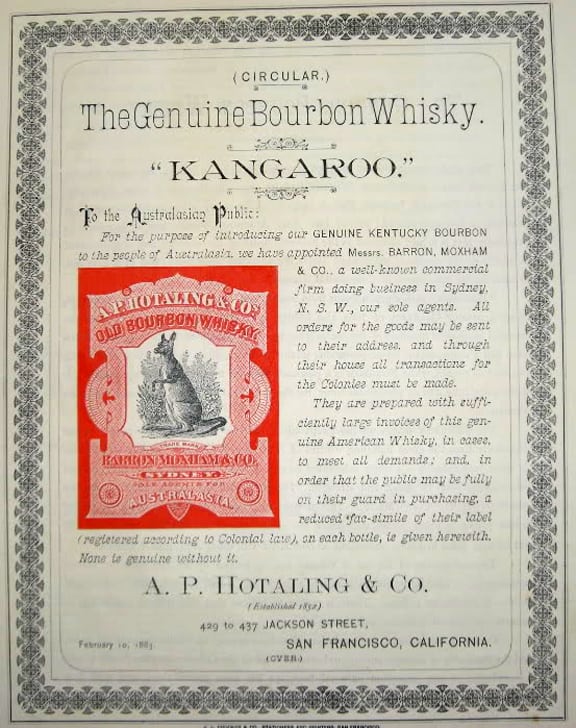 By 1883 Hotaling’s successful ventures in Australia led him to trademark a brand of whiskey especially for the Colonies. This time, he chose Sydney, New South Wales, and the Barron, Moxham Co as his agents. The new brand was to be known as Kangaroo Whiskey, and featured a boldly embossed “Roo” on the bottle’s face. The bottles were blown in San Francisco, filled at Hotaling’s Jackson Street warehouse and shipped to NSW. Pictured is an advertisement for the Kangaroo Whiskey. – Michael Dolcini

Read more: How many other “Buggers” are out there these days?

Ferdinand Meyer V is a native of Baltimore, Maryland and has a BFA in Fine Art and Graphic Design from the Kansas City Art Institute and School of Design. Ferdinand is the founding Principal of FMG Design, a nationally recognized design consultation firm. Ferdinand is a passionate collector of American historical glass specializing in bitters bottles, color runs and related classic figural bottles. He is married to Elizabeth Jane Meyer and lives in Houston, Texas with their daughter and three wonderful grandchildren. The Meyers are also very involved in Quarter Horses, antiques and early United States postage stamps. Ferdinand is the past 6-year President of the Federation of Historical Bottle Collectors and is one of the founding members of the FOHBC Virtual Museum.
View all posts by Ferdinand Meyer V →
This entry was posted in Advertising, Collectors & Collections, Digging and Finding, Soda Bottles, Spirits, Whiskey and tagged A.P. Hotaling, Bourbon, Ebner Bros, J H Cutter, Michael Dolcini, Old Kirk, San Francisco, Sherwood and Sherwood, Sole Agent, tin signs, Townsend & Hostetter Co., Western, Whiskey. Bookmark the permalink.