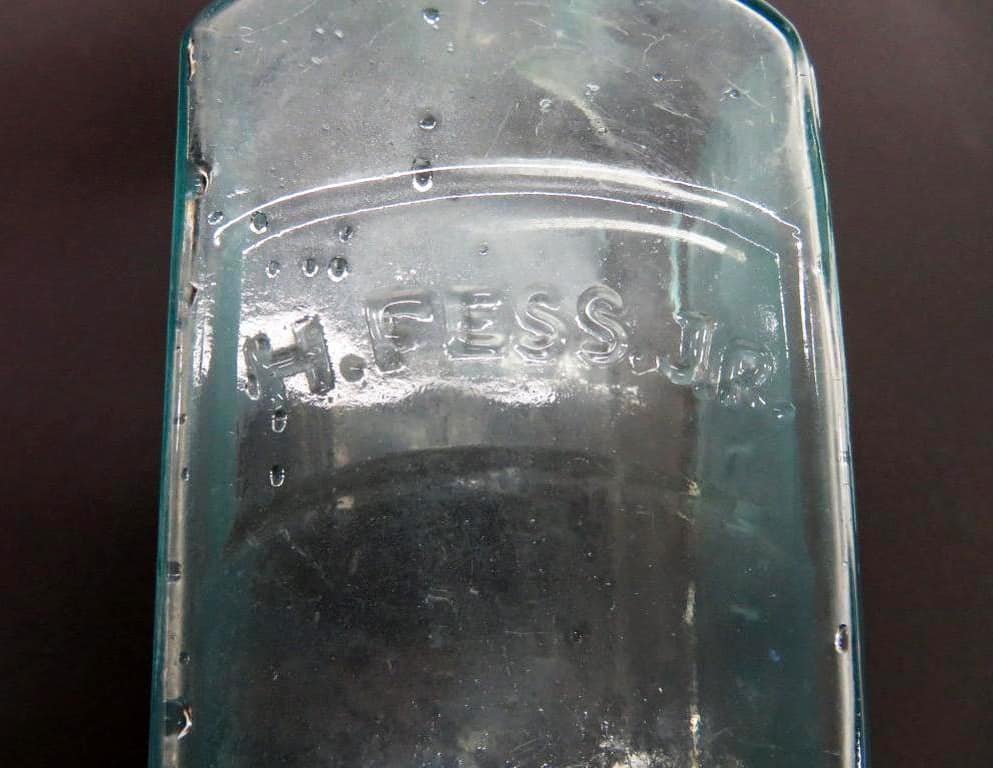 Here is an extremely rare Jaundice Bitters from Milwaukee, Wisconsin put out by Henry Fess Jr., who was a prominent wholesale and retail druggist. The bottle recently showed up in an online auction that included other rather common bottles.

Fess came to Milwaukee from Pittsburgh in April, 1846 and initially was located next door to Ludington’s Corner, at what is now 405 East Water Street. That year, to attract customers, he announced in local newspapers that he had just received a large assortment of medicines from New York.

Henry Fess was born in Switzerland in 1815 and came to America with his parents. He received his citizenship papers in 1816. He later married Catherine M. Fess (1815–1885) and they had one daughter, Croesdella C. Fess. 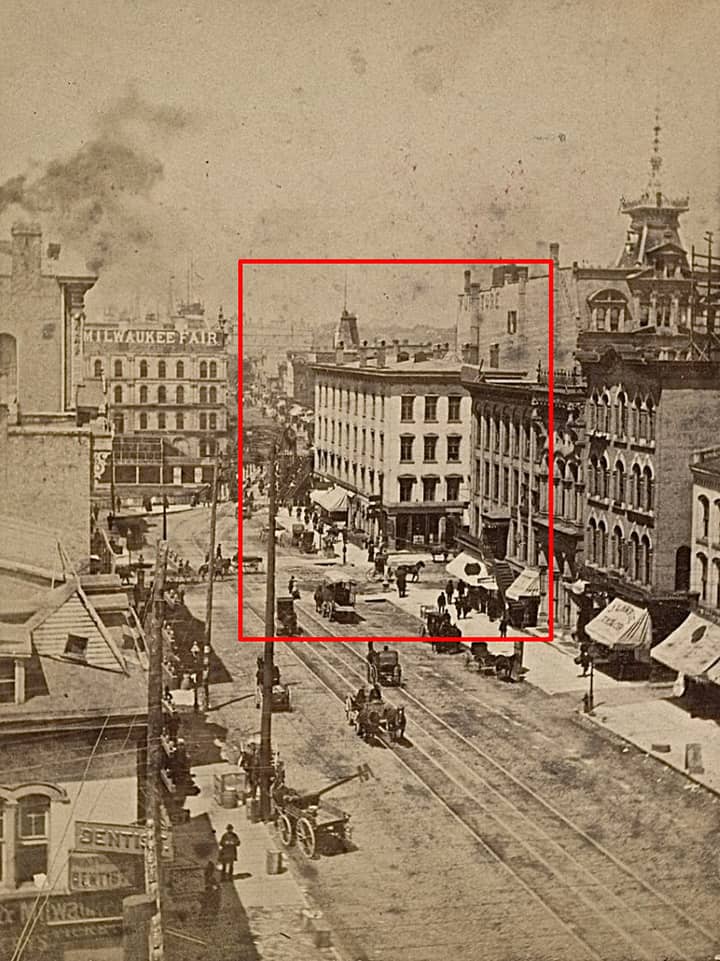 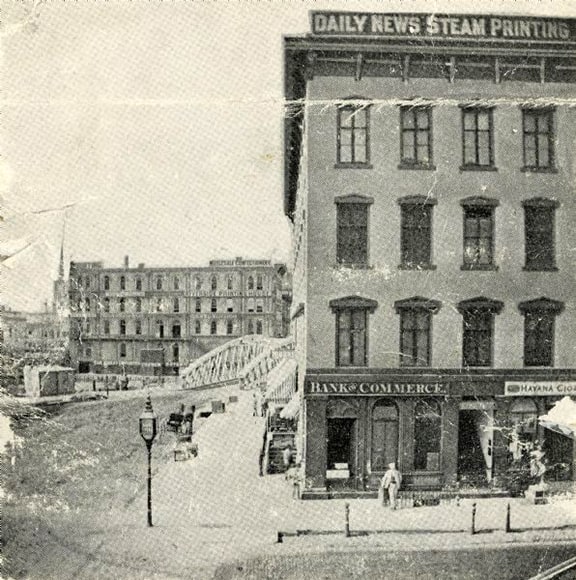 Water Street is a prominent historic street and an entertainment district in Milwaukee, Wisconsin. It is the site of the city’s original building, City Hall, and multiple historic landmarks. Today it is still the major north–south road running through downtown and is home to Milwaukee’s Theater District, Water Street Entertainment District, and much of the city’s political activity.

In 1851, Fess moved to 377 East Water Street, Heidie’s Block; and from there, in 1853, to 395 Martin’s Block, where he conducted a robust business. He moved once again to what is now at 436 Milwaukee Street. His business was then called the Milwaukee Drug Warehouse. Advertising stated that he was a Wholesale and Retail dealer in Mediterranean, India, and all Foreign and Domestic Drugs etc. He also sold dyes, paints, oils, brushes, varnishes, chemicals, window glass, druggist glassware and other articles that were typically found in a drug store in that era. Yes, and he sold pure wine and brandy too. 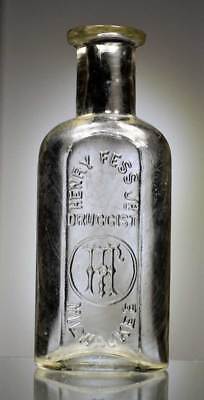 In 1868, Henry Fess filed for bankruptcy and rebounded quickly as he was advertising his celebrated Tonic Bitters in 1869. His advertising that year said it was “Designed for the use of the Medical Profession and Family. It is a invaluable remedy for all diseases of the Liver and Kidneys, and the best Purifier of the Blood in the world, and has been used here by Physicians and others for 20 years“.

Steven Libbey of the Wisconsin Antique & Bottle Club has a few pictures on his web site of this bottle and reports the following, “This aqua bitters bottle from Wisconsin is embossed “H. FESS JR.” on the front, “MILWAUKIE, WIS.” on the back, “JAUNDICE” on the left panel and “BITTERS” on the right. Note the old German spelling of Milwaukee. It has a smooth base and a square blob, unlike the other varieties that have the double collar lip and pontil mark. Henry Fess Jr. was a prominent Milwaukee druggist in the 1840’s and 1850’s. There are a couple of varieties of pontil marked and smooth based bitters and at least one pontil marked druggist bottle known from this company. From left to right below are iron pontil marked bitters 8 1/4″ tall, open pontil bitters 7 1/4″ tall, and open pontil marked medicine. All are Henry Fess Jr. The large size is found with smooth base, IP (iron pontil) and OP (open pontil).

The Pioneer History of Milwaukee, in 1884, stated that “Henry Fess is one of our most respected citizens; and although like many others, he failed to get rich, has the consolation of knowing that he has the respect of his fellow citizens. He is of a very quiet temperament, is not aggressive; in fact, this is his great fault. He is no talker, greets every one cordially, if acquainted, and if he tells you a thing is so, you can depend upon its being true. I have known Mr. Fess intimately for many years, and hope the day is far distant when his pleasant face and lithe form shall be seen upon our streets no more.”

Fess was a life-long druggist who had his own bitters. Not too bad. He would die in 1901 in Milwaukee. 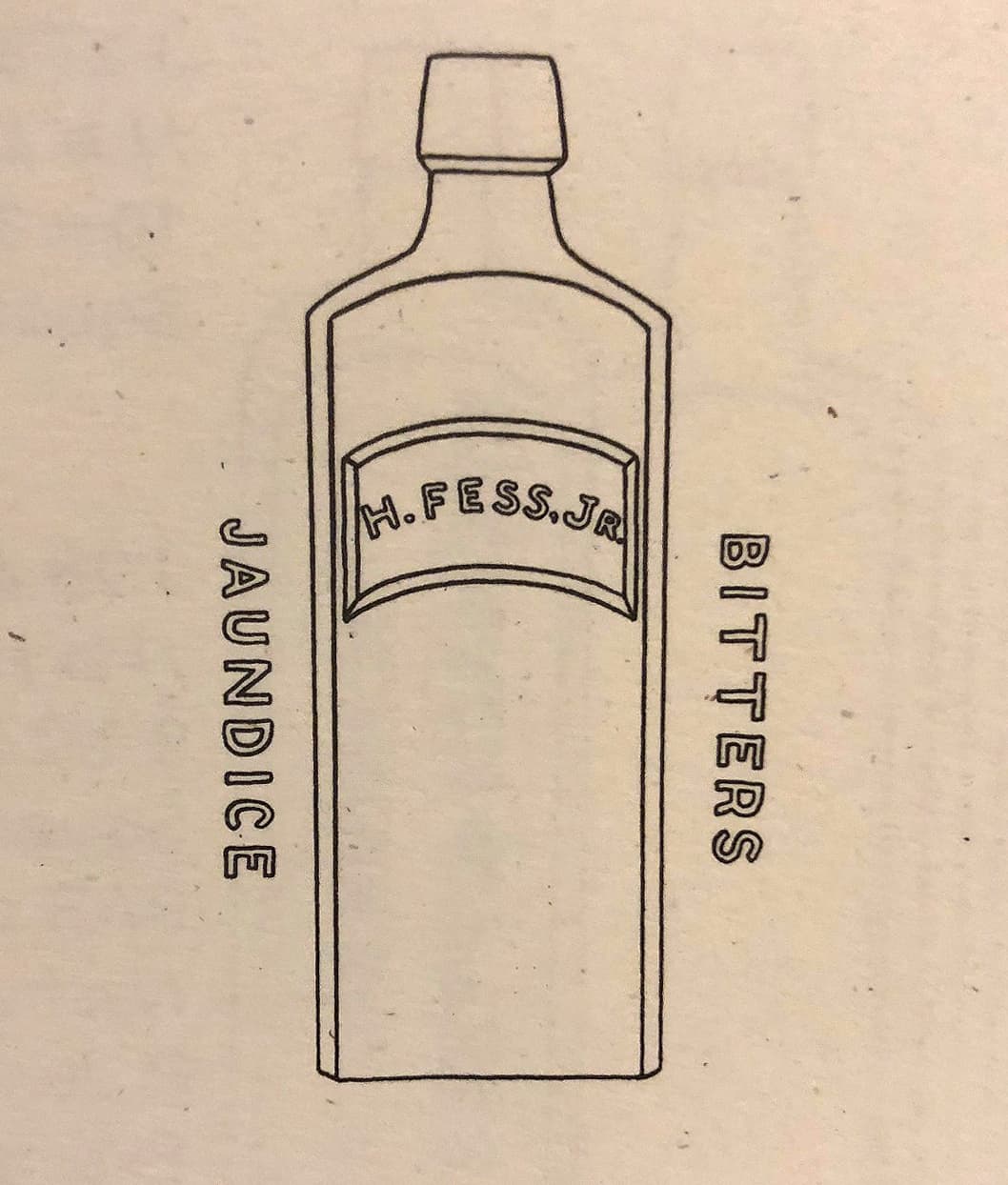 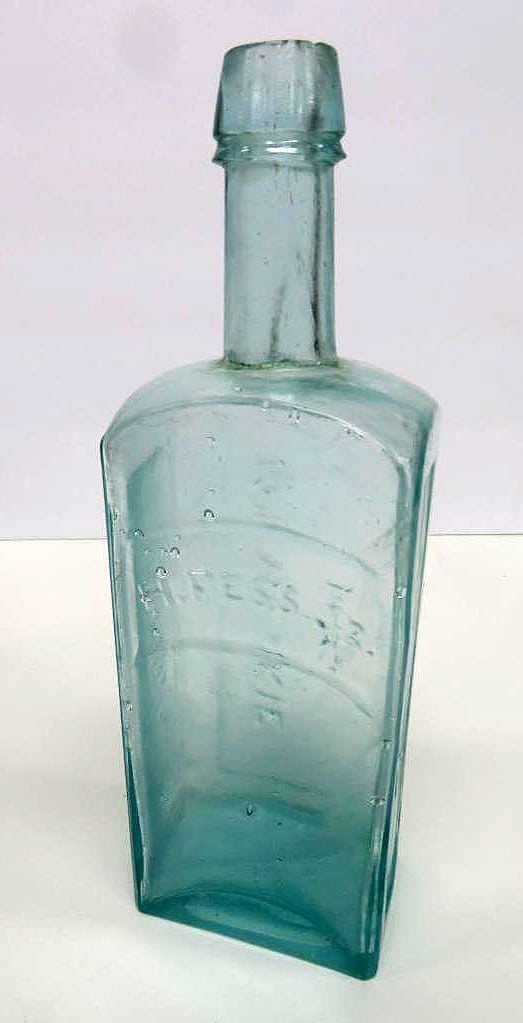 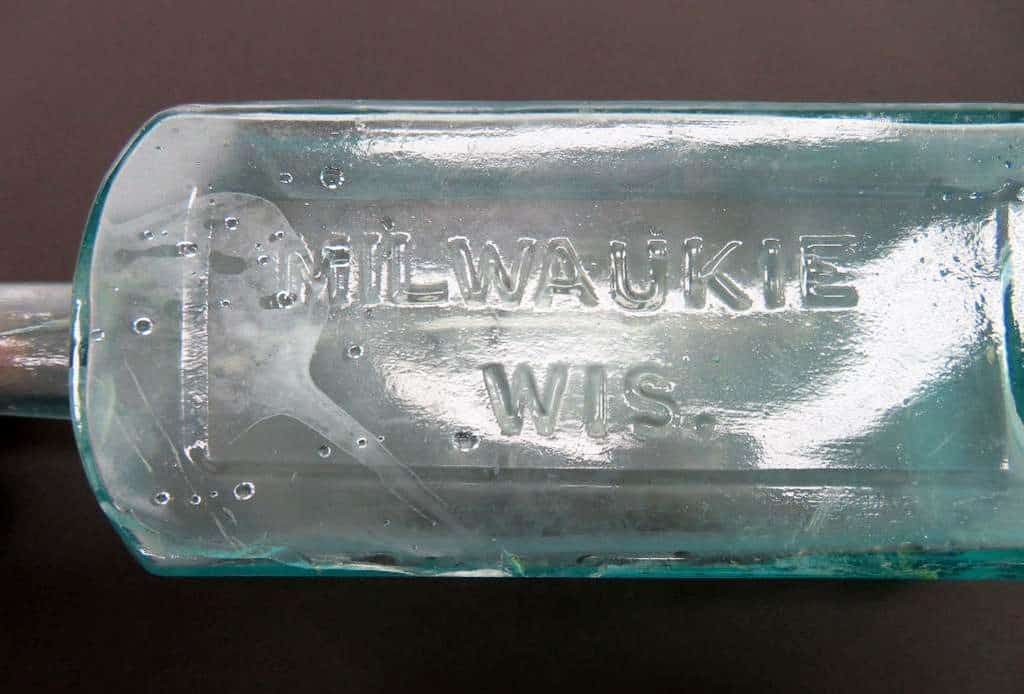 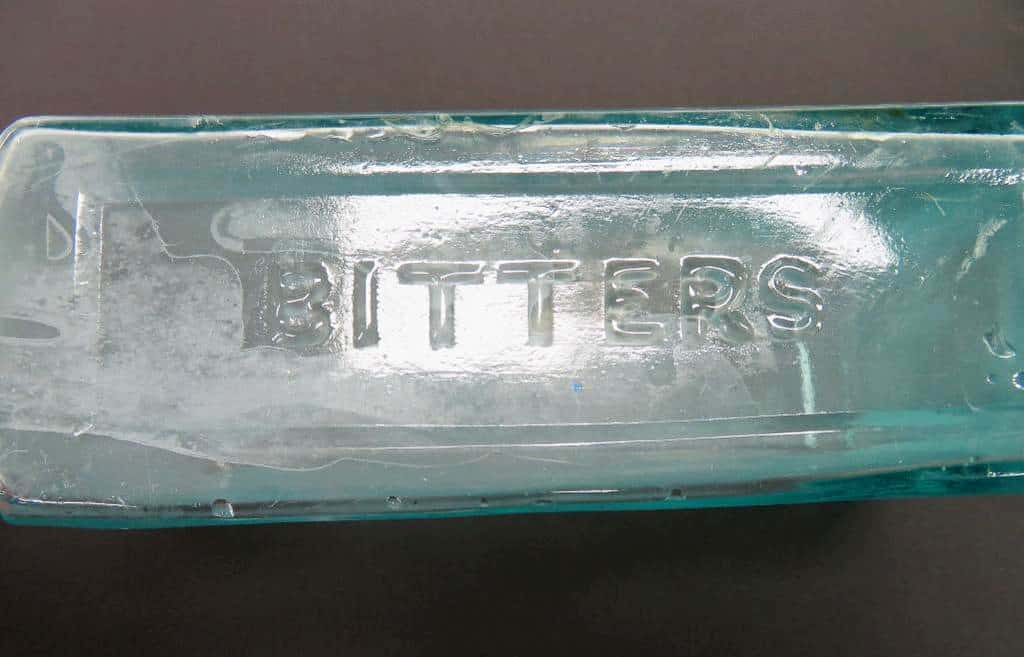 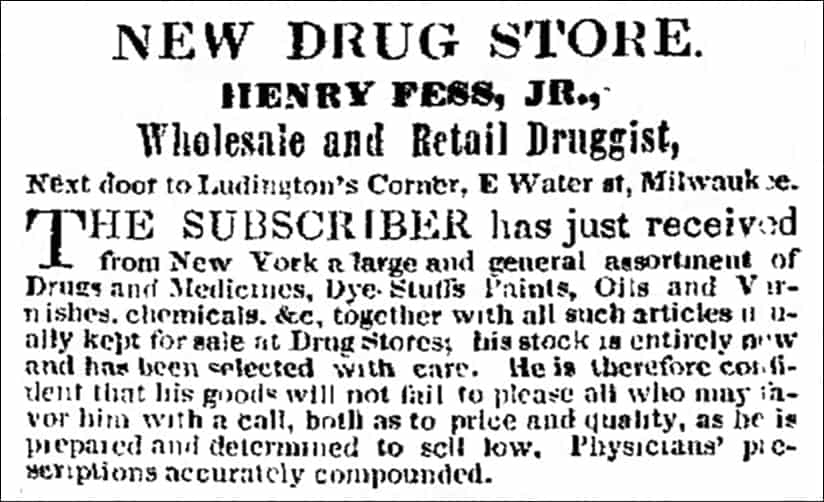 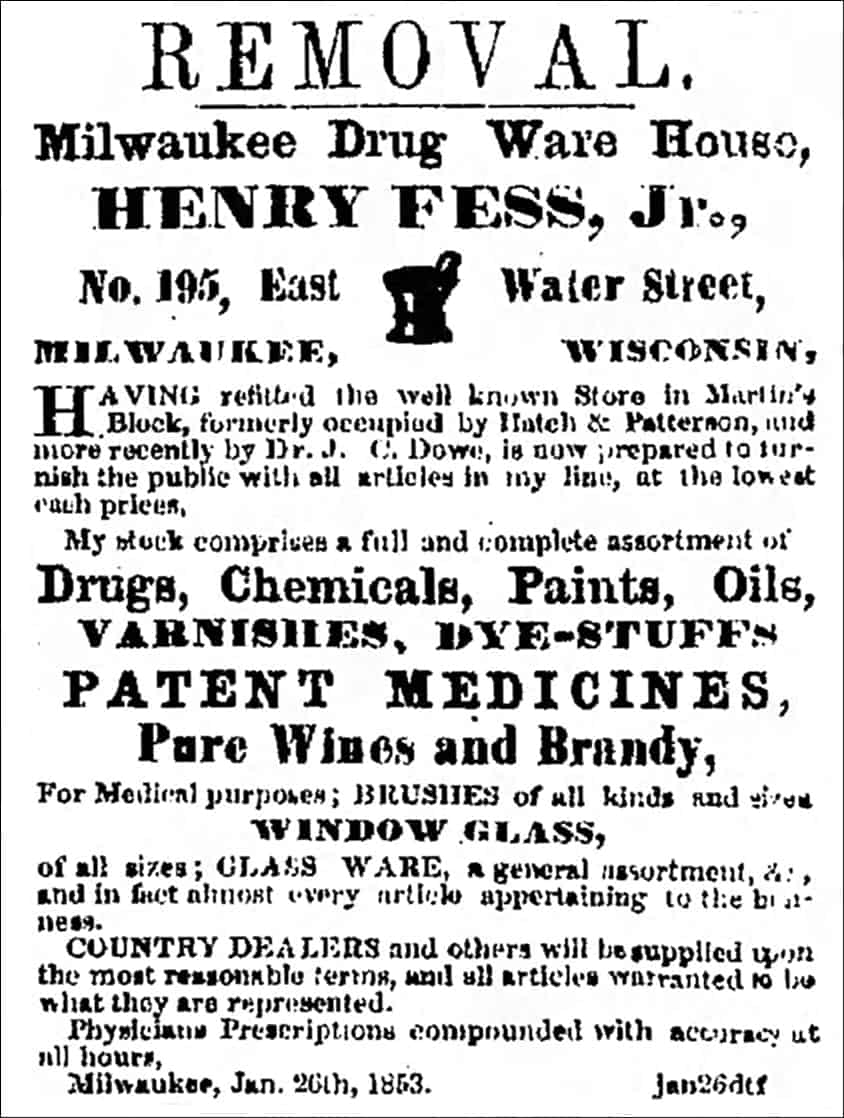 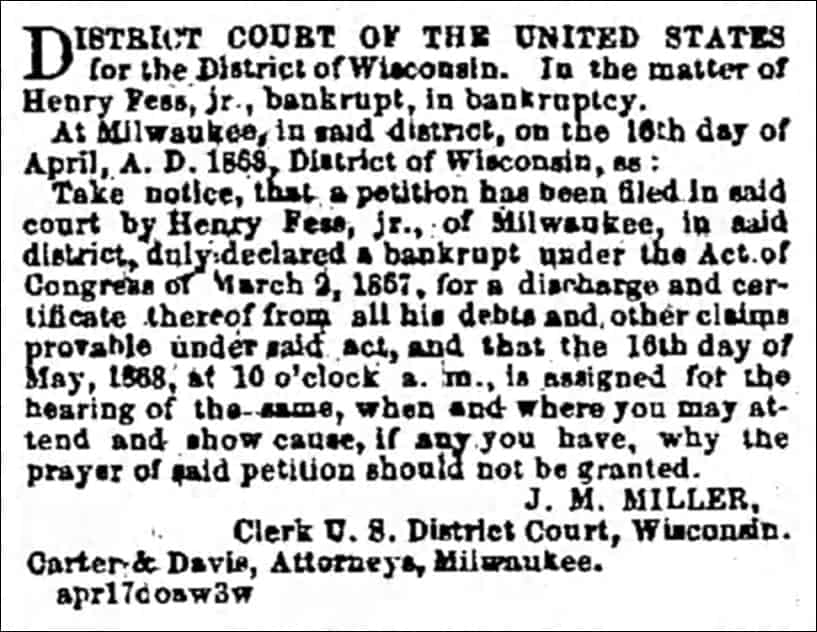 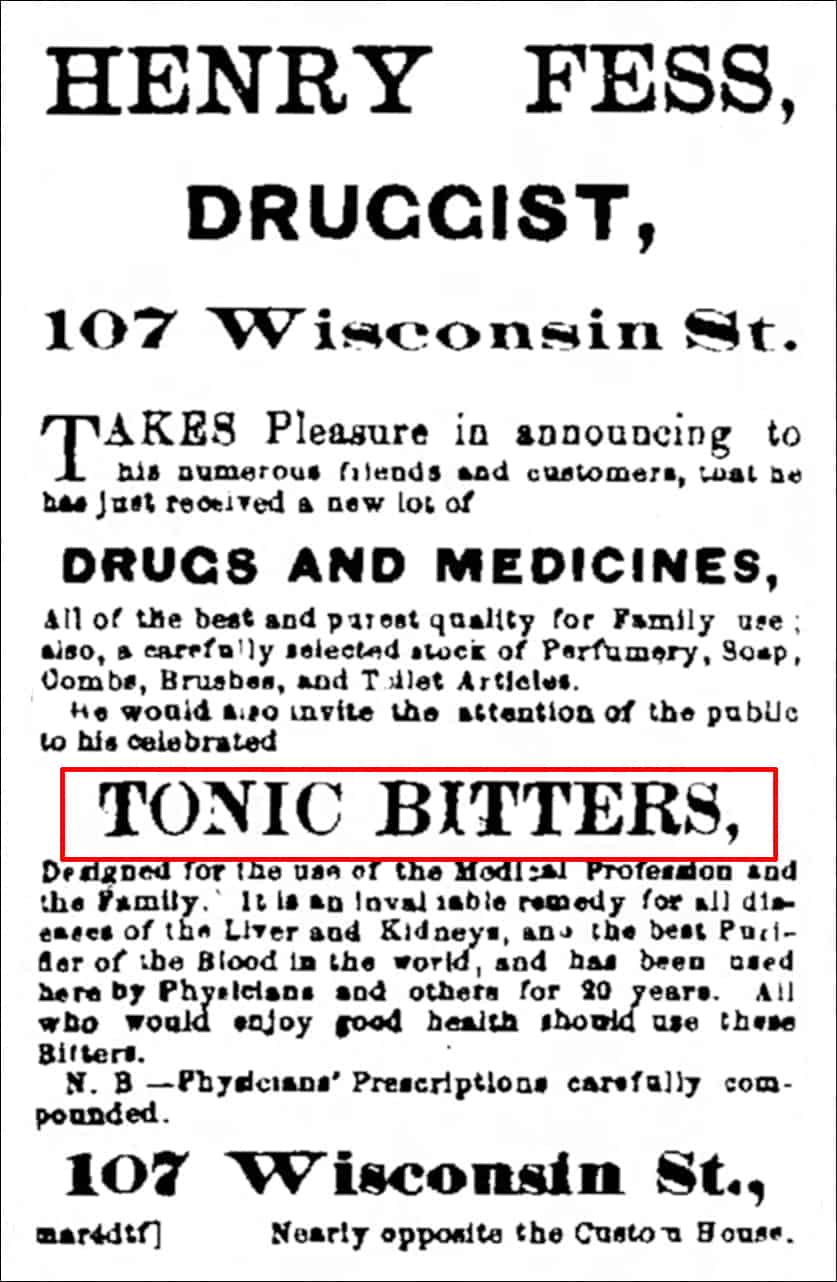 Ferdinand Meyer V is a native of Baltimore, Maryland and has a BFA in Fine Art and Graphic Design from the Kansas City Art Institute and School of Design. Ferdinand is the founding Principal of FMG Design, a nationally recognized design consultation firm. Ferdinand is a passionate collector of American historical glass specializing in bitters bottles, color runs and related classic figural bottles. He is married to Elizabeth Jane Meyer and lives in Houston, Texas with their daughter and three wonderful grandchildren. The Meyers are also very involved in Quarter Horses, antiques and early United States postage stamps. Ferdinand is the past 6-year President of the Federation of Historical Bottle Collectors and is one of the founding members of the FOHBC Virtual Museum.
View all posts by Ferdinand Meyer V →
This entry was posted in Bitters, Druggist & Drugstore, History, Medicines & Cures and tagged bitters, Croesdella, Druggist & Drugstore, H. Fess Jr., Henry Fess, jaundice, Ludington, Medicine, milwaukee, retail, Switzerland, wholesale, Wisconsin. Bookmark the permalink.