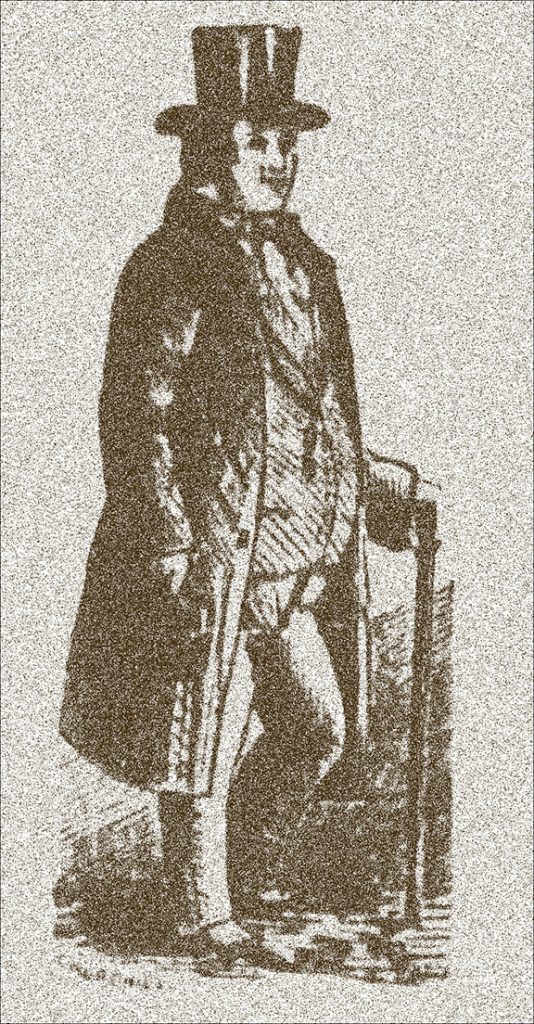 Within this post is reference to two early bitters from 1846 and 1847 that seem to be unlisted. The Strengthening Bitters and Vegetable Tonic Bitters (probably the same bitters with flexible names) are from a Dr. Herrick who is probably Dr. Lewis R. Herrick of Albany, New York.

Dr. Herrick was born in Malden, New York on March 10, 1816 and was a noted physician of his day. Dr. Herrick, a patent medicine man, acquired considerable fame, and a large fortune in that business. His Sugar Coated Vegetable Pills and Dr. Herrick’s Kid Strengthening Plasters had a world-wide reputation, at least according to advertising and write-ups on the man. He called himself “The great Healer of Mankind!” which is a bit lofty. I would love to see a modern-day test of what is sugar pills consisted of, though I have a hunch.

Herrick studied medicine early with a Dr. McClellan of Chatham and subsequently practiced medicine for ten years in Malden. In 1835 or so, he moved to Albany and started his proprietary medicine business. At one point his advertising says Herrick & Brother, Practical Chemists, Albany, New York and use an illustration of what must be the coated Dr. Herrick wearing a top hat and sporting a walking stick. Albany, quite interestingly, seems to be the epicenter of quack medicine during that time period.

The following extrapolation comes from an 1859 book on scams entitled “Humbug“, contained in a chapter devoted to “Advertising, Swindling Quacks“.

Amongst the twenty or so named quacks, you will meet Dr Lispenard of Albany [who also used the name Ezra J. Reynolds] whose real name was Lewis R. Herrick. In 1861 one of his daughters, Helen Estelle Herrick, married J. Moreau Smith who, after working for his father-in-law’s quack medicine operation for eight years, went on to become President of the Rochester Trust and Safe Deposit Company.

During the Civil War, Dr. Herrick said that soldiers leaving for war must take along his sugar coated pills that will kill the fevers, illnesses and diseases from camp life. He said that millions had taken his pills.

In 1870, Herrick moved to New York City. His business may have been acquired by L.W. Warner & Co. Dr. Herrick died on September 4, 1877 and is buried at Mount Hope Cemetery in Rochester, Monroe County, New York.

So here are some of the advertisements I found. 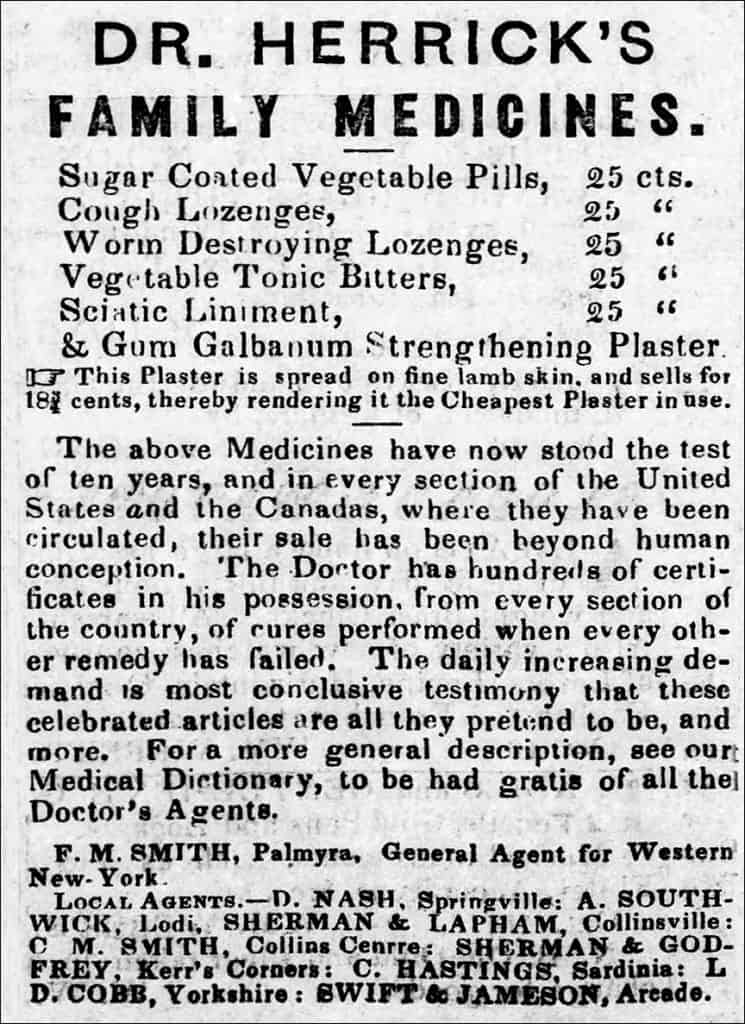 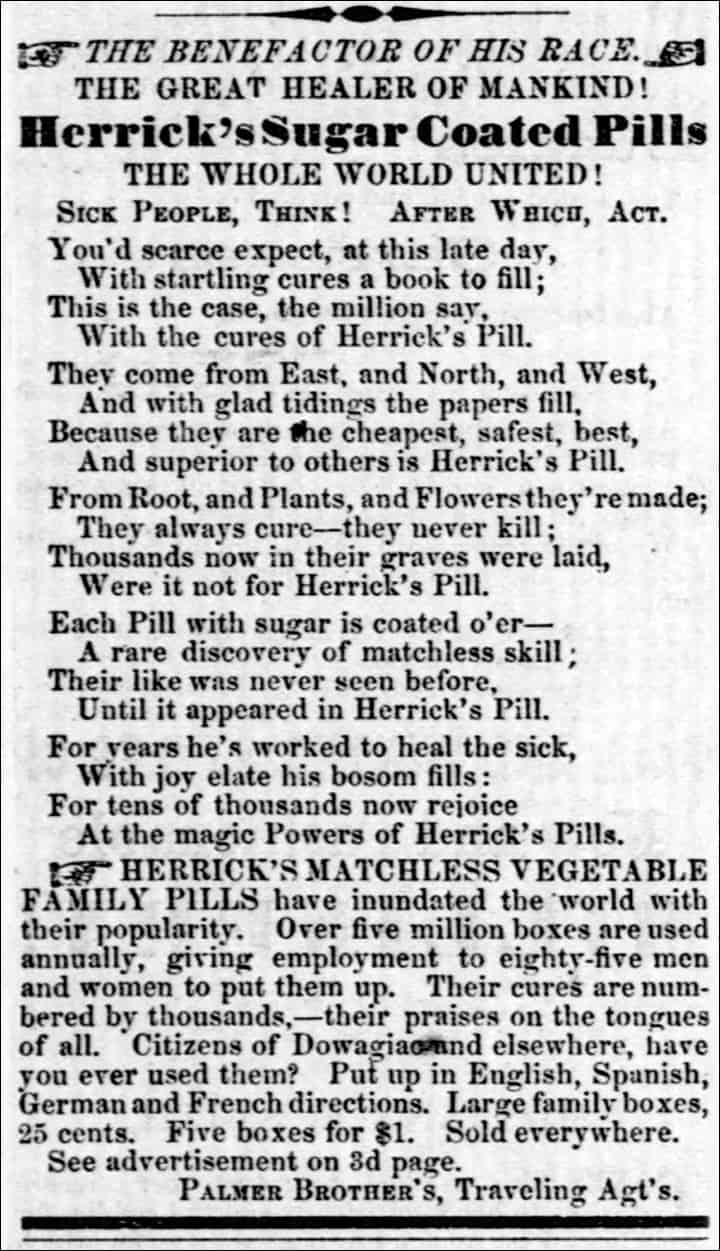 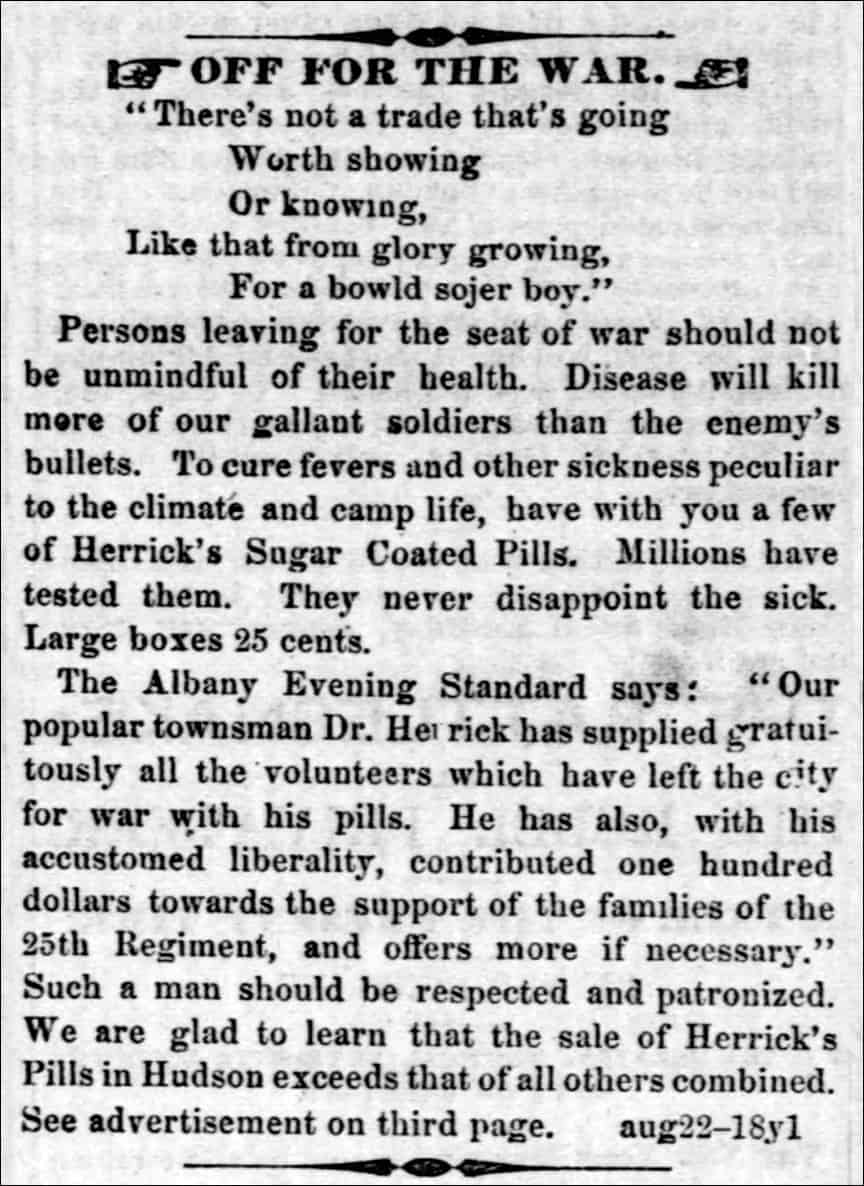 Off For the War – The Cass County Republican, Saturday, February 1, 1862

Looking in Bitters Bottles, I see listing for a:

This might be the same bitters but I seriously doubt it. The reason that it must be Lewis R. Herrick is that he authored The American Domestic Cook Book for 1870. It was published by Dr. Herrick’s Family Medicines. There you go.

As far as the bitters, I am not aware of any bottle examples. The bitters were short lived as Herrick put his weight behind his pills and plasters.

Ferdinand Meyer V is a native of Baltimore, Maryland and has a BFA in Fine Art and Graphic Design from the Kansas City Art Institute and School of Design. Ferdinand is the founding Principal of FMG Design, a nationally recognized design consultation firm. Ferdinand is a passionate collector of American historical glass specializing in bitters bottles, color runs and related classic figural bottles. He is married to Elizabeth Jane Meyer and lives in Houston, Texas with their daughter and three wonderful grandchildren. The Meyers are also very involved in Quarter Horses, antiques and early United States postage stamps. Ferdinand is the past 6-year President of the Federation of Historical Bottle Collectors and is one of the founding members of the FOHBC Virtual Museum.
View all posts by Ferdinand Meyer V →
This entry was posted in Advertising, Bitters, History, Medicines & Cures and tagged Albany, bitters, family, Herrick, Lewis, Medicine, New York, pills, plaster, quack, standard, Strengthening, Vegetable. Bookmark the permalink.