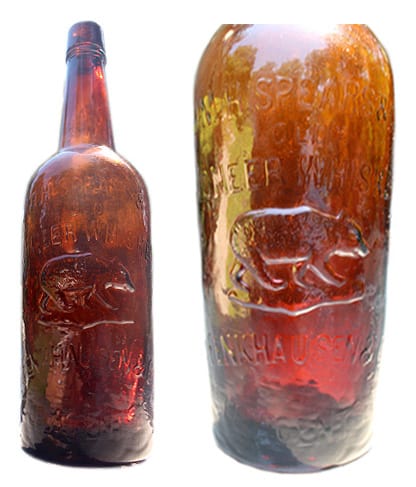 Marty Vollmer, the South Carolina show chairman, called me and said a friend found an ad on Craigslist for a bottle with a bear on it. I asked if it was clear and he informed me that it was amber. I got on-line and the ad read;

There were several pictures that were not very good but I recognized it as the Wm. H. Spears & Co. Old Pioneer Whiskey.

I contacted the gentleman and we agreed to meet the next day in Charlotte to see the bottle. I walked into a McDonald’s in south Charlotte and met Mr. Donald Hurst, his wife Mary and his granddaughter who helped him post the ad and pictures. The bottle was red shading to honey amber in the shoulder and so heavily whittled that the “Sole Agents, S.F.” was almost illegible. The condition was almost mint. We agreed on a price and I purchased the bottle. I thought it would be best if Don wrote a history of the bottle.

My story begins in 1951, when I was on a trip to the beach with my family. I was digging in the sand for clams when I found the bottle. That was in Netarts, Oregon in Netarts Bay.

I kept it over the next 65 years, often showing it to friends. In 1980, my wife, children and I moved to Charlotte, North Carolina. It has always been kept in the closet, only bringing it out to show it off and telling people the story of how I found it.

Two weeks ago we had people over for a cook out and the right man was there. He had an app on his phone and found the bottle. Our Granddaughter listed it on Craigslist and from there it found a new home with David Jackson.

Foot Note: In 2008 we bought a beach house in Netarts, Oregon. The address is Whiskey Creek Road.

I have collected bottles since 1975 and I never thought I would have the opportunity to add this bottle to my collection. Thank you Mr. Hurst, I promise to take good care of it.

Ferdinand Meyer V is a native of Baltimore, Maryland and has a BFA in Fine Art and Graphic Design from the Kansas City Art Institute and School of Design. Ferdinand is the founding Principal of FMG Design, a nationally recognized design consultation firm. Ferdinand is a passionate collector of American historical glass specializing in bitters bottles, color runs and related classic figural bottles. He is married to Elizabeth Jane Meyer and lives in Houston, Texas with their daughter and three wonderful grandchildren. The Meyers are also very involved in Quarter Horses, antiques and early United States postage stamps. Ferdinand is the past 6-year President of the Federation of Historical Bottle Collectors and is one of the founding members of the FOHBC Virtual Museum.
View all posts by Ferdinand Meyer V →
This entry was posted in Collectors & Collections, Digging and Finding, Spirits, Whiskey and tagged Bear, california, charlotte, Craigs List, David, Hurst, Jackson, Lost, Marty, Netarts, North Carolina, Old, oregon, Pioneer Whiskey, San Francisco, Vollmer, Wm. H. Spears. Bookmark the permalink.