The Centennial 1776 Tonic Bitters from Philadelphia?

The Centennial 1776 Tonic Bitters from Philadelphia?

Jeff Wichmann has some super nice bottles in his American Bottle Auctions | Auction 62 that is now underway. I thought it was just a matter of time, and bottles, before another auction would take place from Jeff’s shop in Sacramento. Most, if not all of these items seem to be new consignments, as I do not remember seeing them when I visited in September of this year.

One lot you bitters collectors might want to pay attention to is the Centennial 1776 Tonic Bitters. This is an odd bottle that I have only seen once before, and that was at an auction in June 2010 that Jeff also conducted. That bottle is now comfortably resting on a shelf in Houston. If this bottle is truly from Philadelphia, that is weird and too easy. So what goes? 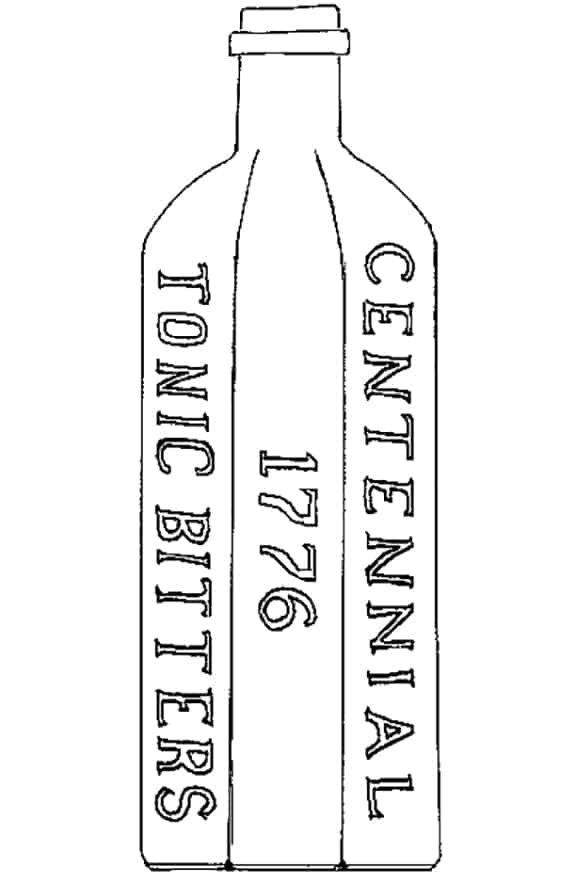 Jeff’s description of the first example he sold:

According to ABA, a gentleman and his wife who have had it for a number of years, consigned this fine piece. The bottle came as a great surprise, as it is not only a rare bottle, but the form is unique in many minds with the six sides culminating in a dome with an applied ring on the neck. Probably made in 1876. Example dug near Leadville, Colorado

Jeff’s description of the example now at auction:

CENTENNIAL TONIC BITTERS 1776. C-115. Applied band and smooth base 8 ¾”. We mentioned at the beginning of the bitters listings that we had some rare bottles and nothing is rarer than this unusual bottle. Although there is more than one bottle that commemorates the hundred years after the independence, you’d think there’d be a lot more. The bottle came as a great surprise, having sold the other only known variant as it is not only a rare bottle, but also the form is unique in our minds with the six sides culminating in a dome with an applied ring on the neck. We’re thinking this bottle could have been made in 1876, what do you think? If you like rarity and the unusual, this one might be for you. Grades a 9.0 with some haze. We know, with a little professional cleaning, this bottle would really shine. We can certainly help in that regard. 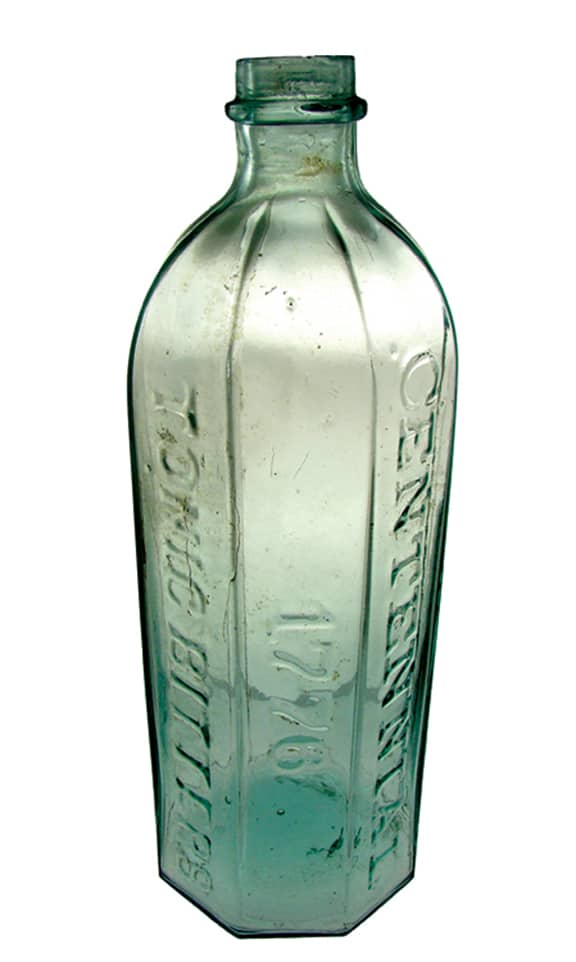 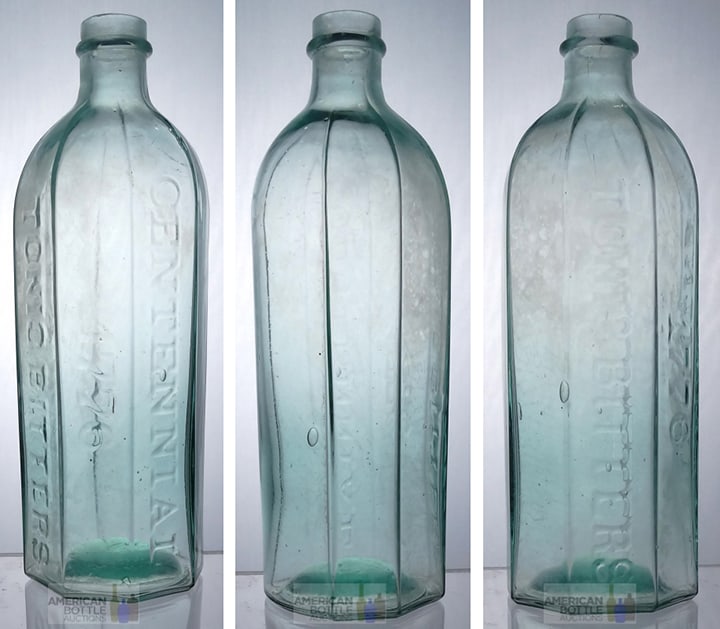 If you notice, the Ring & Ham listing for this extremely rare bottle says, “Buchanan and Stephen, 388 Market Street, Philadelphia, Pennsylvania”. I wonder where they got this information as I can not find any listings for Buchanan & Stephen in Philadelphia on or around 1876 which one might suspect inspired the name of this brand?

Now both of Jeff’s listings have western connections like, “Example dug near Leadville, Colorado” for the 2010 example and just the fact that he is auctioning a second example in Sacramento. Who knows, maybe it was consigned from the east?

When I search online, I find no Philadelphia connections with the exception of the very ‘Philadelphia like’ name, “Centennial 1776 Tonic Bitters”. Of course, on July 4, 1776, the Continental Congress declared that the thirteen American colonies were a new nation, the United States of America, and no longer part of the British Empire. The 100 year anniversary or centennial would have been 1876.

As you might imagine there were tons of events, products and references to our Centennial in 1876 just like the Bicentennial in 1976. With bitters, there are lots of Centennial brands, some listed and some not listed, in the Ring & Ham Bitters Bottles books.

On my own, I found an advertisement for Centennial Bitters sold by A. C. Hopkins & Company in Indianapolis in 1876. You can see an ad in the Select Listings below.

Next, I find an advertisement for Centennial Bitters sold by Messrs. Champigny & Fink in New Orleans (see ad below) in 1878.

I then find a listing for a Centennial Tonic Bitters that was sold by Hunt, Rankin & Lamar and D. B. Plumb & Co. in Georgia around 1878 to 1880. You can see two advertisements below. The 1776 was not mentioned in the brand name. Was this our bottle?

Next there is a man named Theodore Keuchman who was a druggist in Muscatine, Iowa who was arrested in 1911 and tried in 1912 for selling labeled bottles of Centennial Tonic Bitters with 30% alcohol content, bitter herbs and rock candy. The suit was brought by anti-saloon owners and temperance members for the state. In Ring & Ham, this is C 116 L Centennial Tonic Bitters. This was a labeled amber square.

There was also a C 117 Centennial Tea Bitters from Newark, New Jersey in 1877 and a C 117.7 Centennial Wine Bitters made by J. H. Robinson in Tunhannock, Pennsylvania. 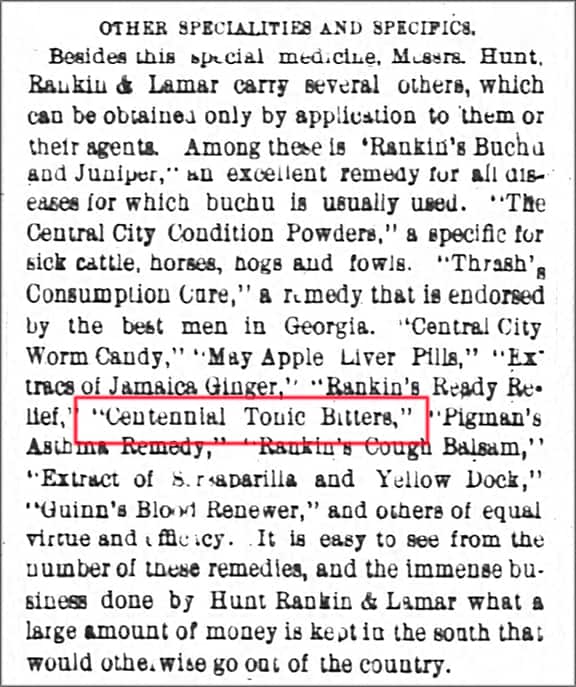 1882: Gostorf v. State (1882) 39 Ark. 450. Centennial Tonic Bitters, a compound consisting of water and 30 per cent alcohol medicated with a few bitter herbs and rock candy, comes within an intoxicating liquor statute, the testimony as a whole showing that it was capable of being used as a beverage and was actually so used. – Lawyers’ Reports Annotated, Lawyers’ Co-operative Publishing Company, 1917 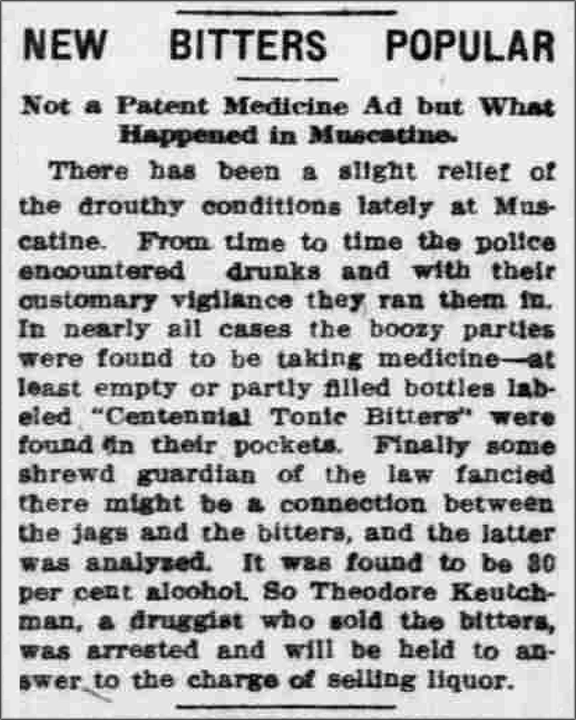 1912: The holding on the former decision was that Centennial Tonic Bitters contained sufficient alcohol to make it an intoxicating liquor, capable of being used as a beverage. The finding of the district court now under consideration is that this Bitters, as compounded and sold by the defendant (we have no means of knowing how it was compounded and sold by the defendant), was, in fact, a medicine, and was not reasonably capable of being used as a beverage; and, as compounded by the defendant, the defendant, as a registered pharmacist, had a legal right to sell. There is nothing before us on this hearing except the application for the writ of certiorari, the order of the judge for the writ and the service of the writ, the judgment of the court below, and the opinion of the Supreme Court upon the former hearing. The contention of the plaintiff seems to be that, when this court annulled the former order and reversed the case, the district court should have proceeded at once to pronounce judgment of contempt on the record as made on the former trial, without any further opportunity to the defendant to be heard, and that the court erred in the retrial of said cause, and in permitting the defendant to introduce further testimony. To support this contention, plaintiff relies upon Sexton v. Henderson, 47 Iowa 131, and Lombard v. Gregory, 88 Iowa 431. Both of these cases were equity cases, triable de novo in this court, and the judgment and decree of this court were final and conclusive, and ended the litigation. Nothing further remained for the district court except to enter a judgment or order in accordance with the final judgment and decree of this court. We are also cited to Lord v. Ellis, 11 Iowa 170. – Reports of Cases at Law and in Equity Determined by the Supreme Court of the State of Iowa, Volume 174, 1912

Ferdinand Meyer V is a native of Baltimore, Maryland and has a BFA in Fine Art and Graphic Design from the Kansas City Art Institute and School of Design. Ferdinand is the founding Principal of FMG Design, a nationally recognized design consultation firm. Ferdinand is a passionate collector of American historical glass specializing in bitters bottles, color runs and related classic figural bottles. He is married to Elizabeth Jane Meyer and lives in Houston, Texas with their daughter and three wonderful grandchildren. The Meyers are also very involved in Quarter Horses, antiques and early United States postage stamps. Ferdinand is the past 6-year President of the Federation of Historical Bottle Collectors and is one of the founding members of the FOHBC Virtual Museum.
View all posts by Ferdinand Meyer V →
This entry was posted in Advertising, Bitters, Druggist & Drugstore, History, Questions, Revolutionary War, Tonics and tagged 1776, aqua, atlanta, bitters, Buchanan, Candy, centennial, Colorado, Georgia, herbs, Iowa, Leadville, Meyer, Muscatine, Philadelphia, rock, Stephen, Theodore Keuchman, Tonic, Wichmann. Bookmark the permalink.