I did a post yesterday on Paine’s Celery Compound that revealed some super-sized advertising in various newspapers across United States. I would have to believe that taking full-page or almost full advertisements had a dramatic effect with the consumer who was being bombarded by every type of quack medicine, remedy, cure, bitters or tonic on the market. I especially enjoyed the testimonials from persons and dignitaries who probably never even tried the product like doctors, nurses, politicians, business tycoons, cabinet holders, sports figures, fire chiefs, preachers and of course mothers. You know, say something nice about the product and get your picture in the paper. The makers of Paine’s Celery Compound made millions. 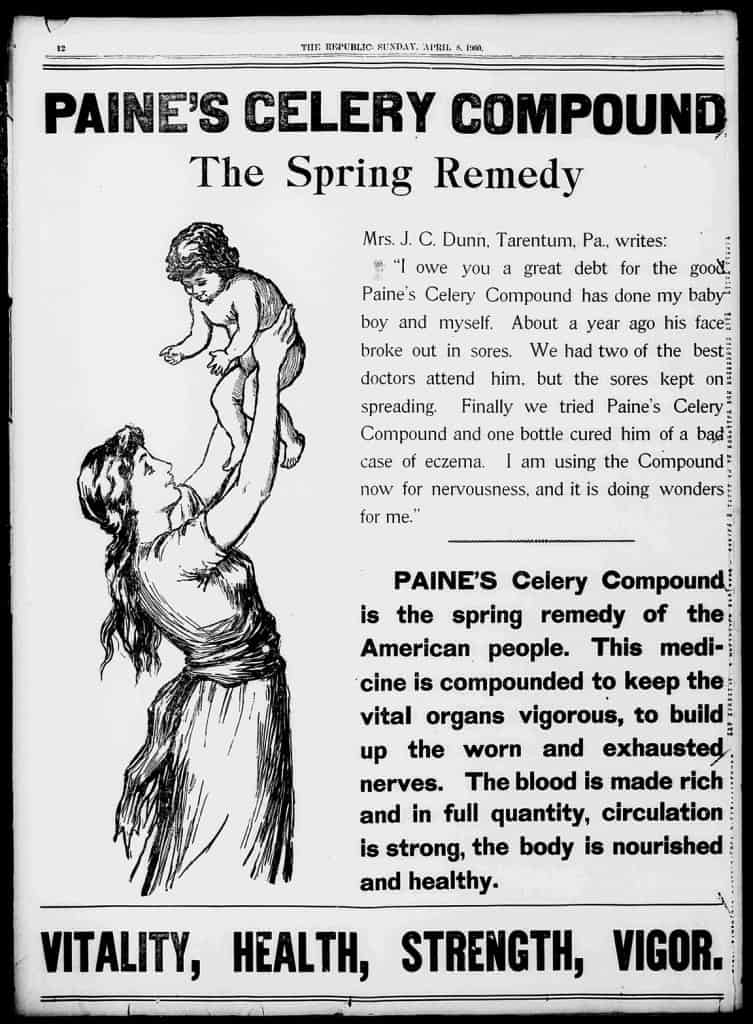 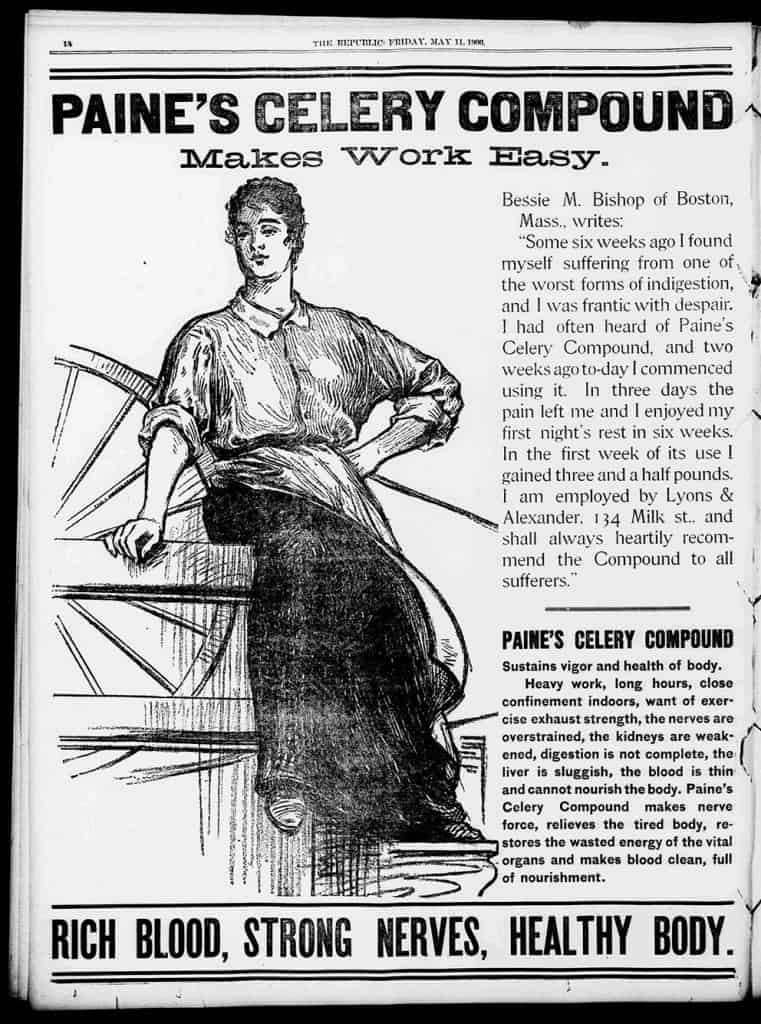 [below] Paine’s Celery Compound Right In Its Own Home – Vermont – The United Opinion (Bradford, Vermont), April 15, 1892 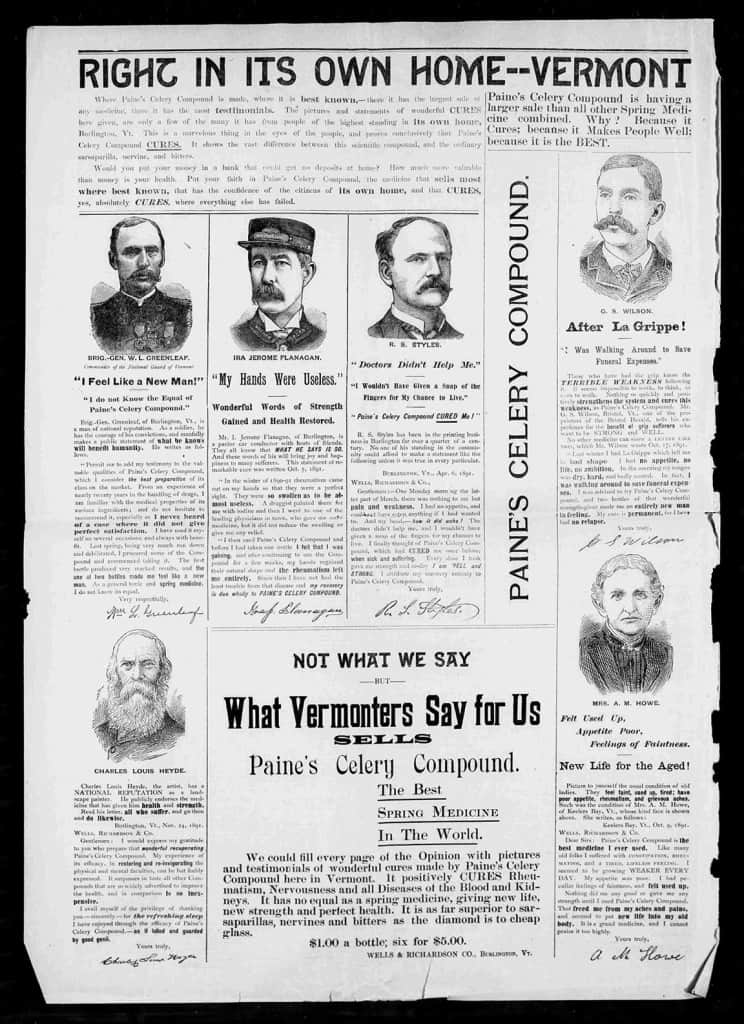 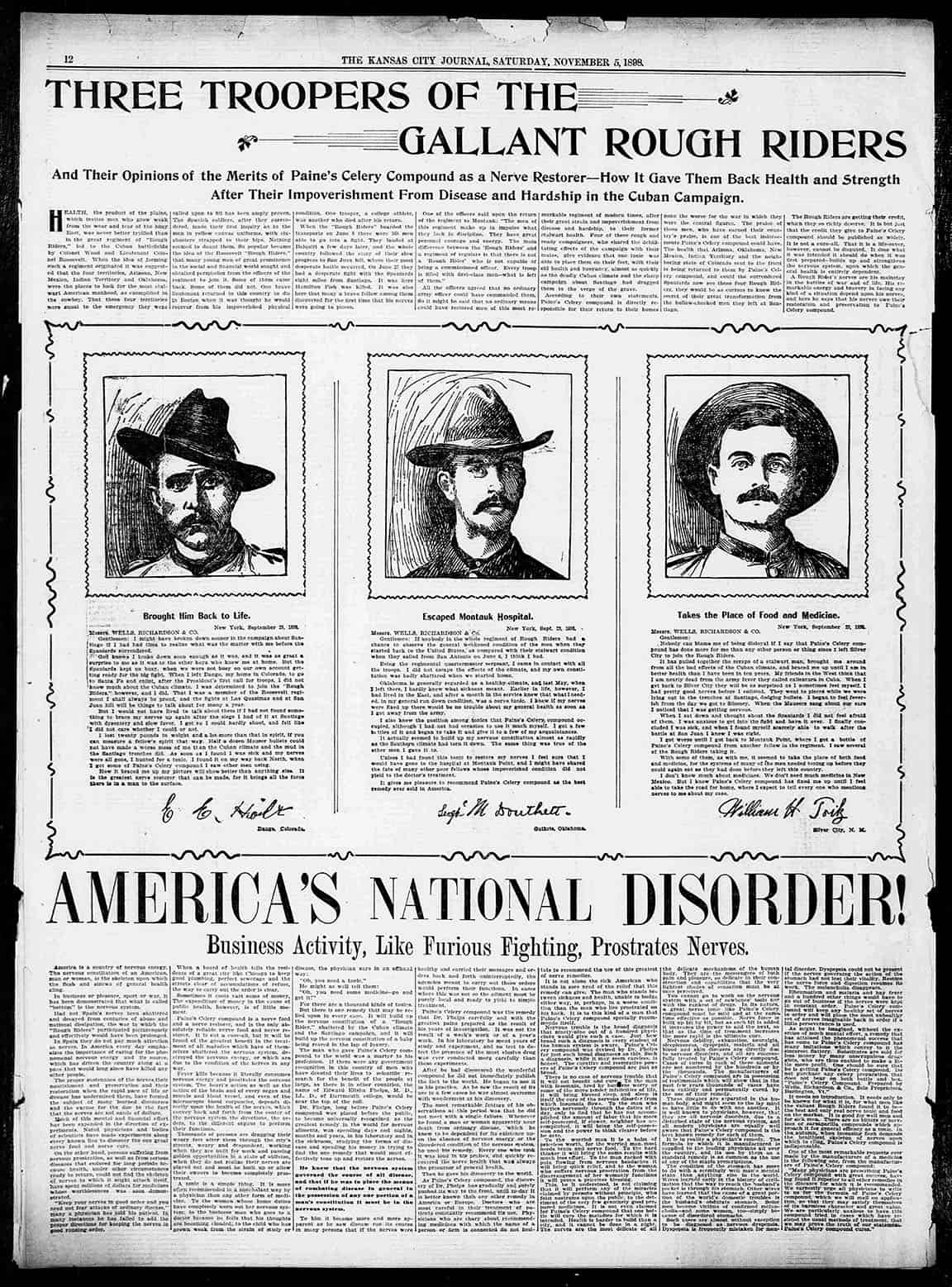 [below] Paine’s Celery Compound Far Outstrips Them All! – The Saint Louis Republic, November 19, 1901 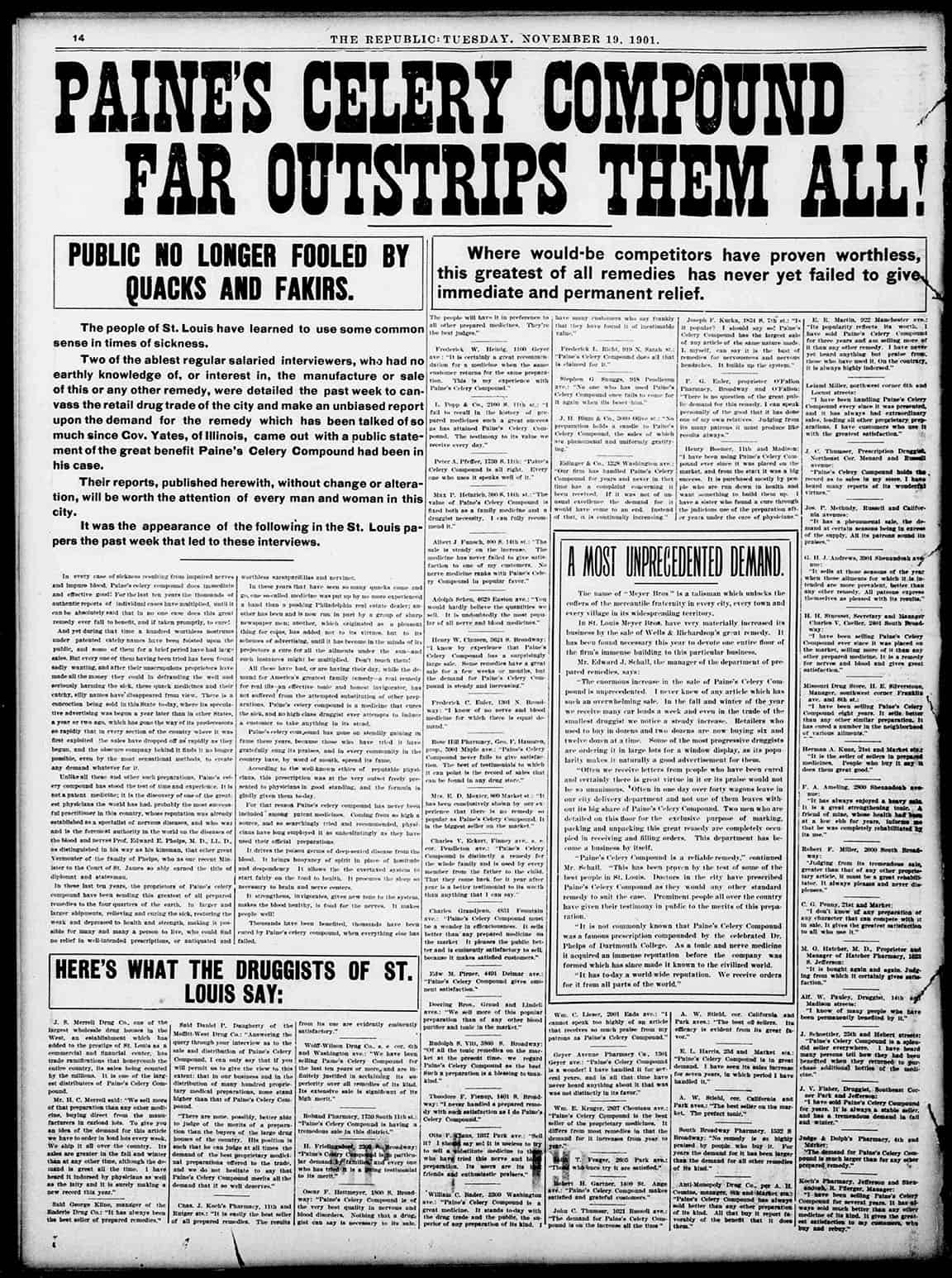 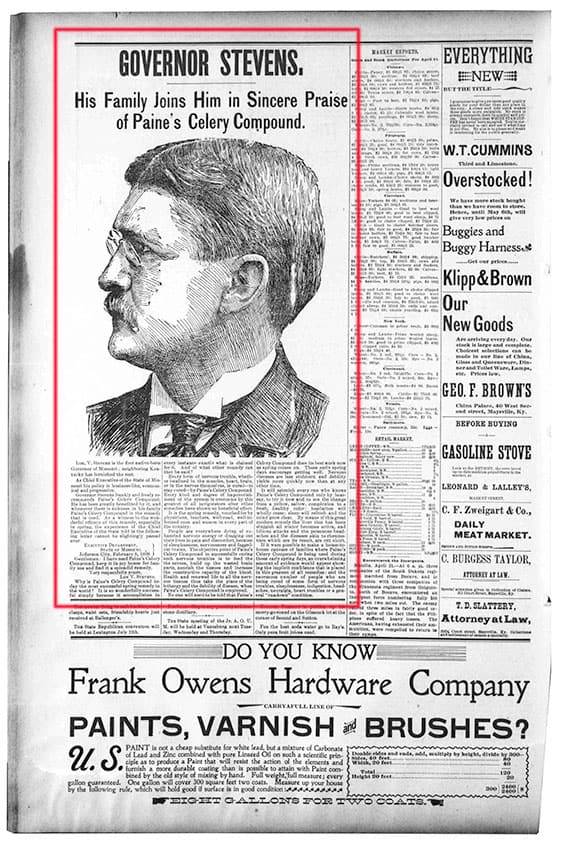 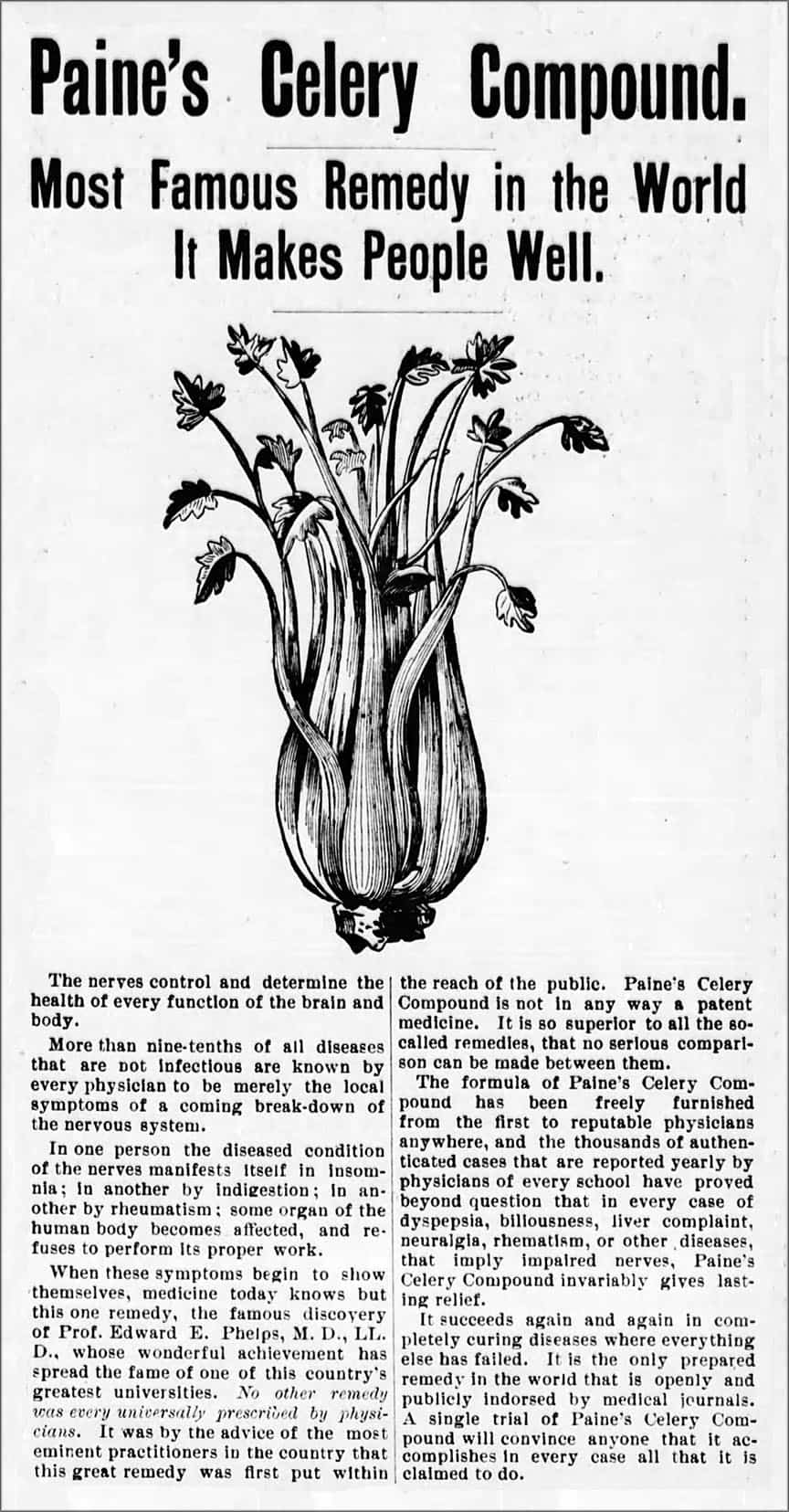 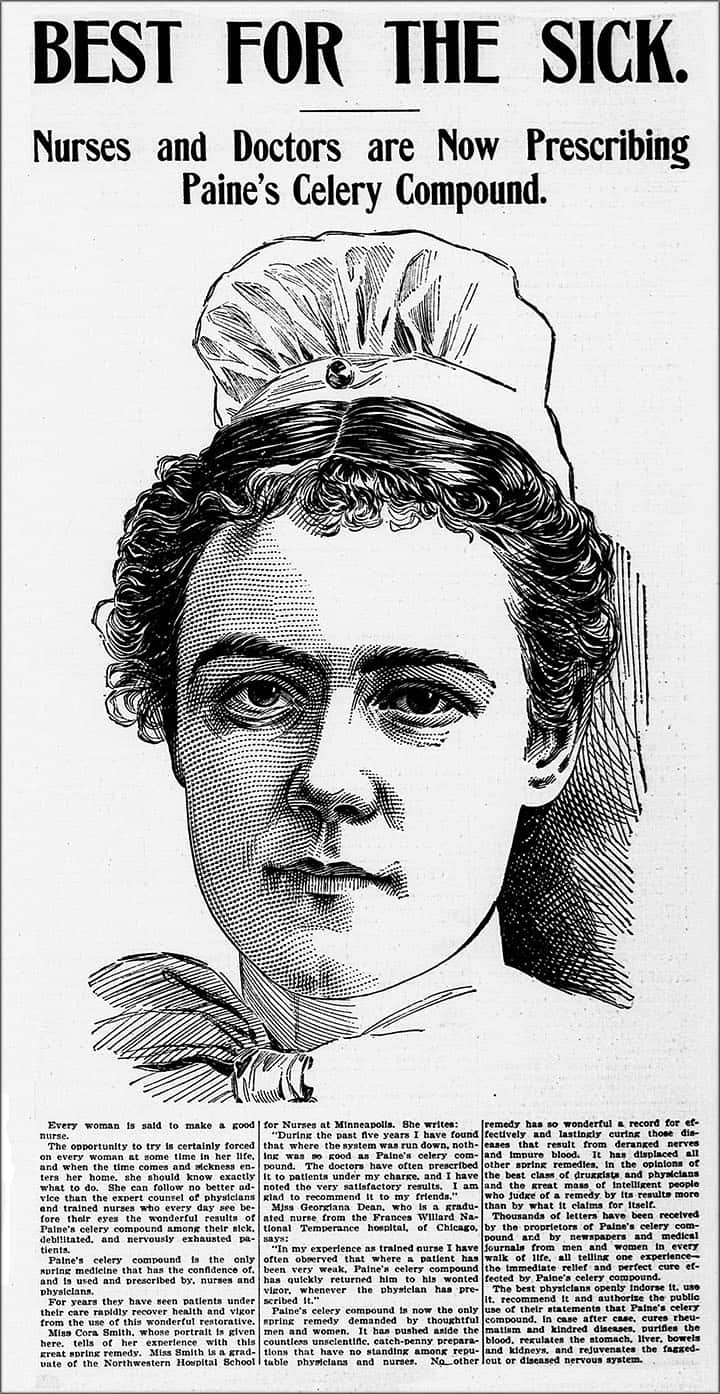 [below] Greatest Fire Chief In The World – Benefit He Received from Paine’s Celery Compound. – Middlebury Register (Middlebury, Vermont), May 30, 1902 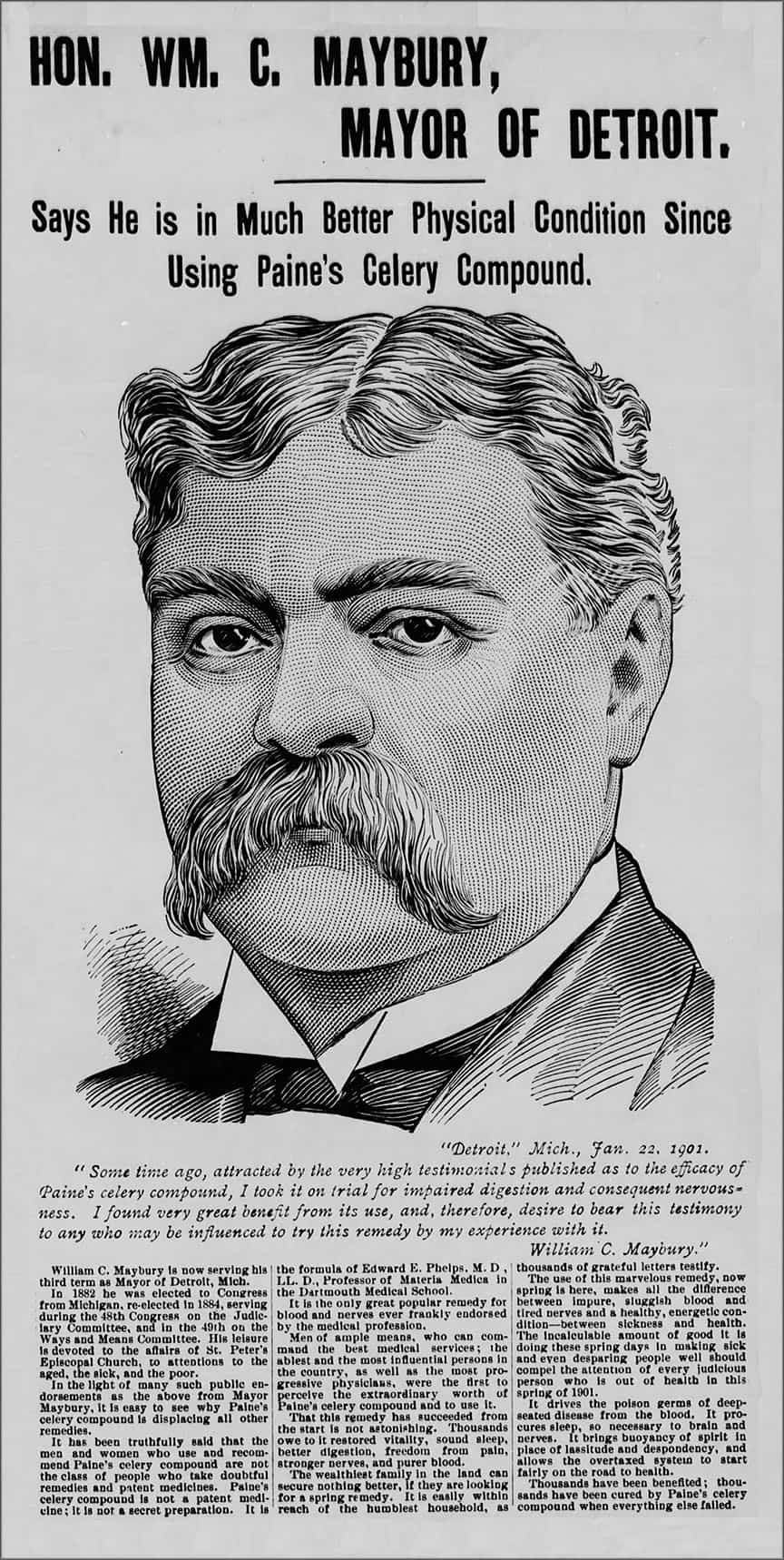 [below] Georgia Owes Its Railroads to Him. – Paine’s Celery Compound Was a Revelation to E. C. Machen – Middlebury Register (Middlebury, Vermont), April 26, 1901 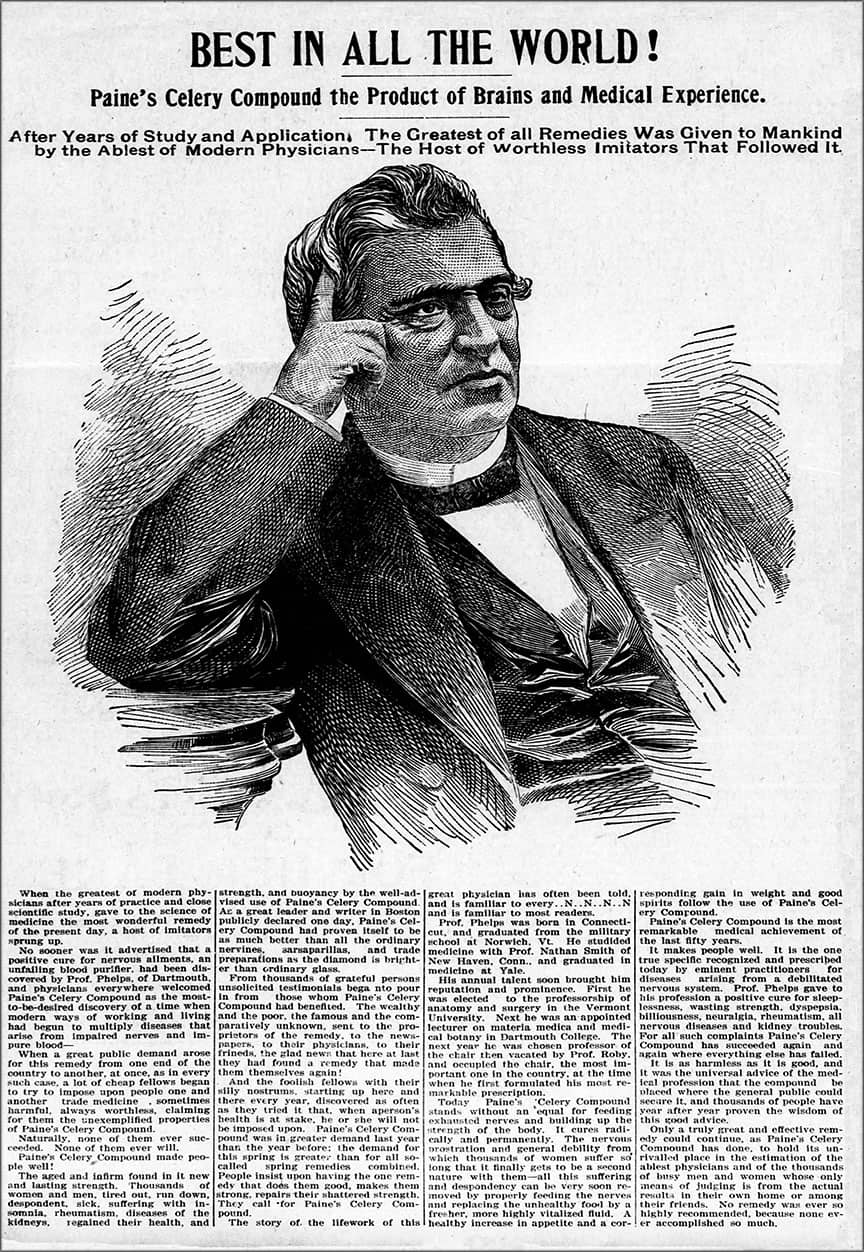 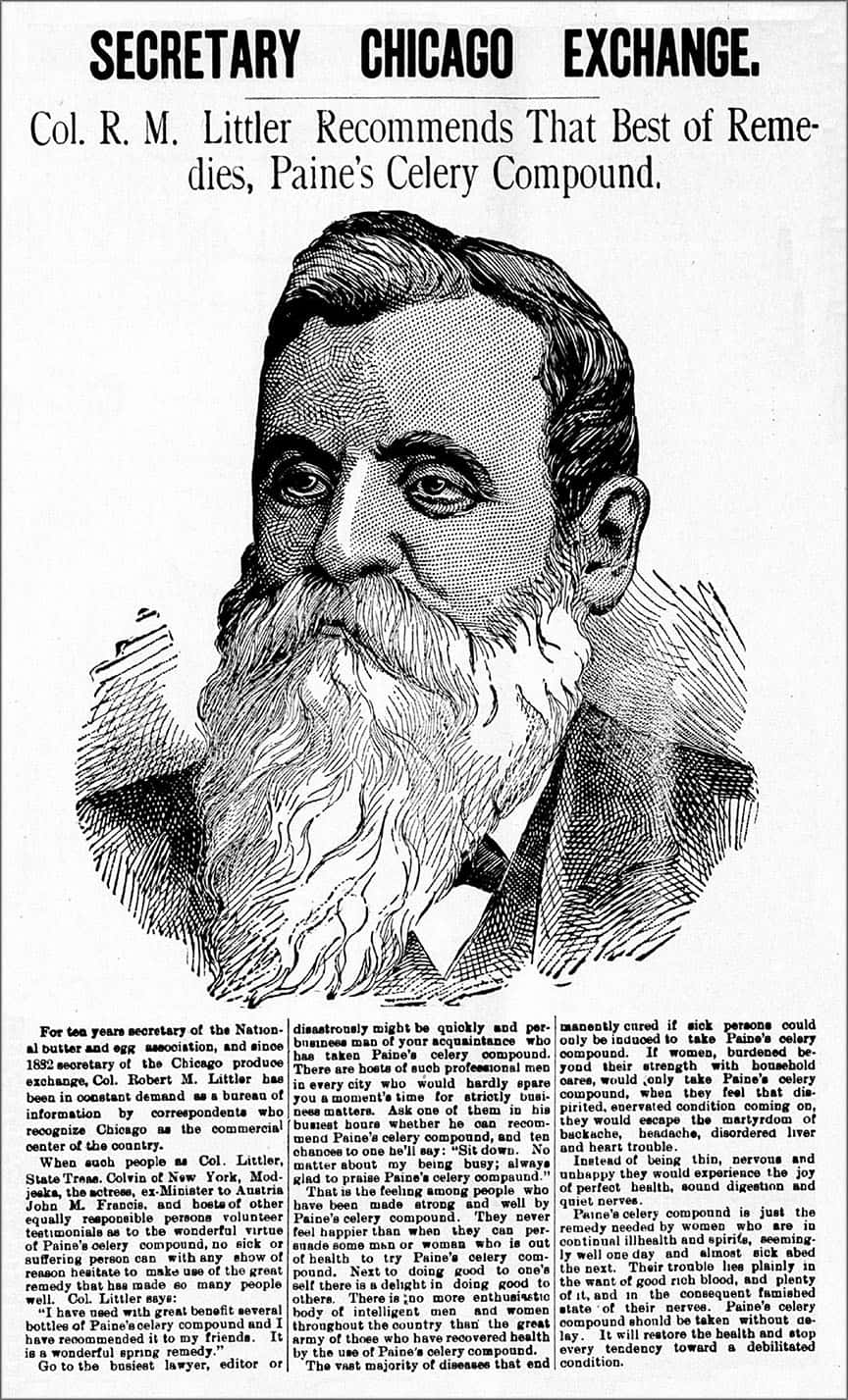 [below] Practice What They Preach. Leading Clergymen of Every Denomination Use and Advise Paine’s Celery Comp0und. – The Evening Bulletin (Maysville, Kentucky), February 12, 1898 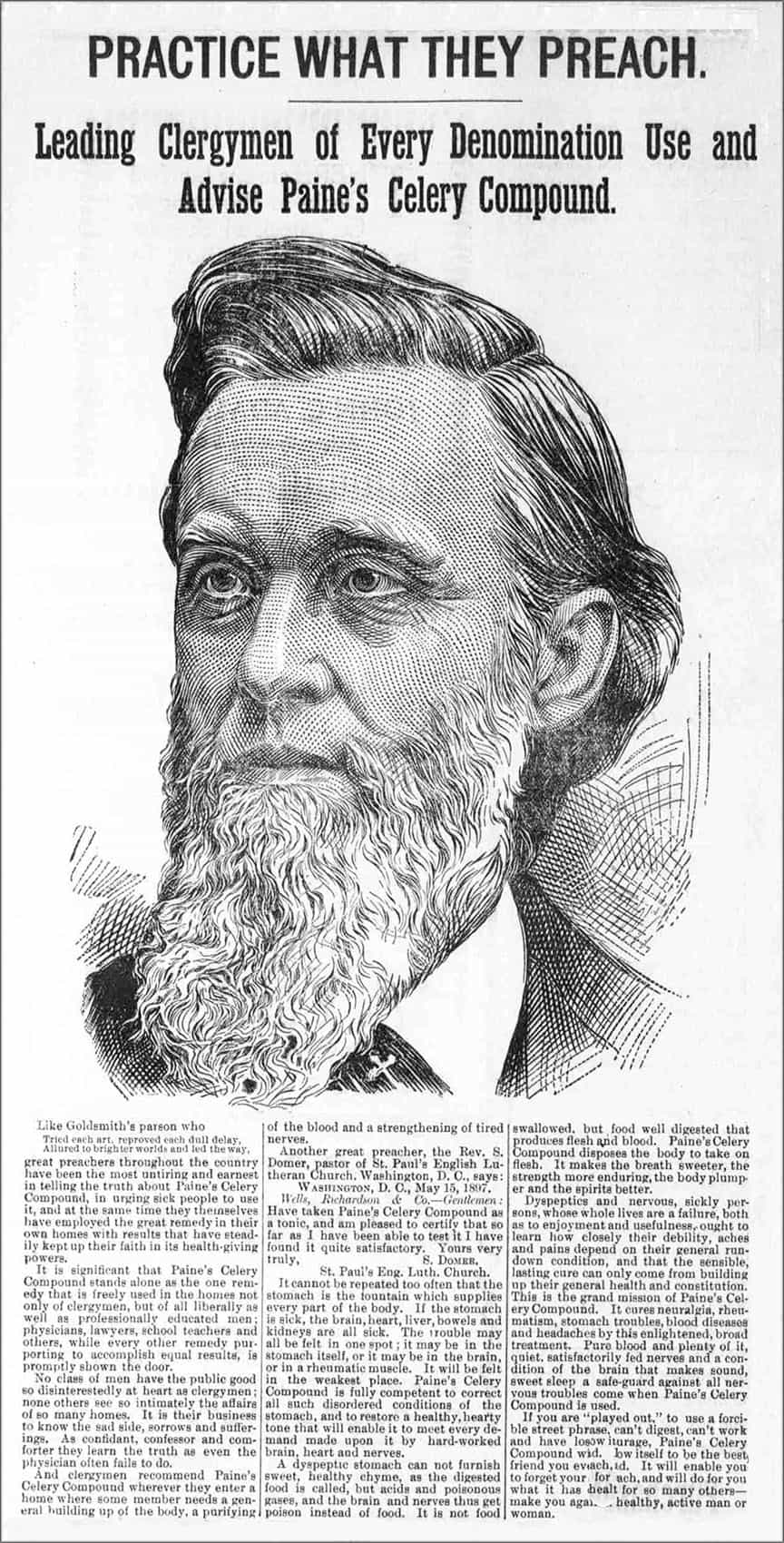 Ferdinand Meyer V is a native of Baltimore, Maryland and has a BFA in Fine Art and Graphic Design from the Kansas City Art Institute and School of Design. Ferdinand is the founding Principal of FMG Design, a nationally recognized design consultation firm. Ferdinand is a passionate collector of American historical glass specializing in bitters bottles, color runs and related classic figural bottles. He is married to Elizabeth Jane Meyer and lives in Houston, Texas with their daughter and three wonderful grandchildren. The Meyers are also very involved in Quarter Horses, antiques and early United States postage stamps. Ferdinand is the past 6-year President of the Federation of Historical Bottle Collectors and is one of the founding members of the FOHBC Virtual Museum.
View all posts by Ferdinand Meyer V →
This entry was posted in Advertising, Druggist & Drugstore, History, Medicines & Cures, Remedy, Tonics and tagged advertising, Blood, celery, Compound, Cure, Dwyer, Elkes, Littler, Machen, Maybury, Medicine, michael, Miller, Musham, nerves, newspaper, Paine's, Potter, Remedy, spring, Stevens, Tonic, Vermont. Bookmark the permalink.