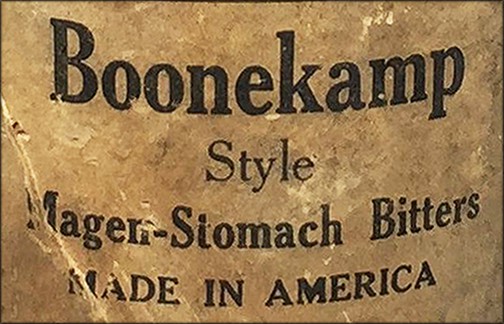 As a bitters collector, I often wondered what Boonekamp meant? In the early years of collecting, I thought is was a brand but later realized that many brands of bitters used Boonekamp in their name. Boonekamp is actually a generic name for a bitter spirit or style of stomach bitters.

In Bitters Bottles by Carlyn Ring and W. C. Ham, there are at least twenty Boonekamp listings including a few with proprietors as noted below:

Around 1780, there was a resident pharmacist in Leidschendam, Holland whose name was according to tradition, Boonekamp or Kamp. He made a bitter liqueur ​​from gin and a herb mixture and sold his recipe to AM Freres in Antwerp. This type of liqueur production soon spread to Belgium, Germany and United States.

Boonekamp is prepared by maceration or percolation of selected herbs, fruits, roots and bark in a pre-selected spirit. The different herbal blends contain 36-52 components. Among the herbs are anise, coriander, cinnamon and star anise. The Boonekamp smell is aromatic and spicy, slightly licorice-like, and in the finish, warm-burning. It also has a medicinal taste due to the herb mixture. The alcohol content is 40 to 49 percent by volume and the sugar content is a maximum of three grams per 100 millilitres. The duration of storage causes further differentiation of taste between the various producers. The formulations of herbal formulas varied, so “Boonekamp” is now a generic term. 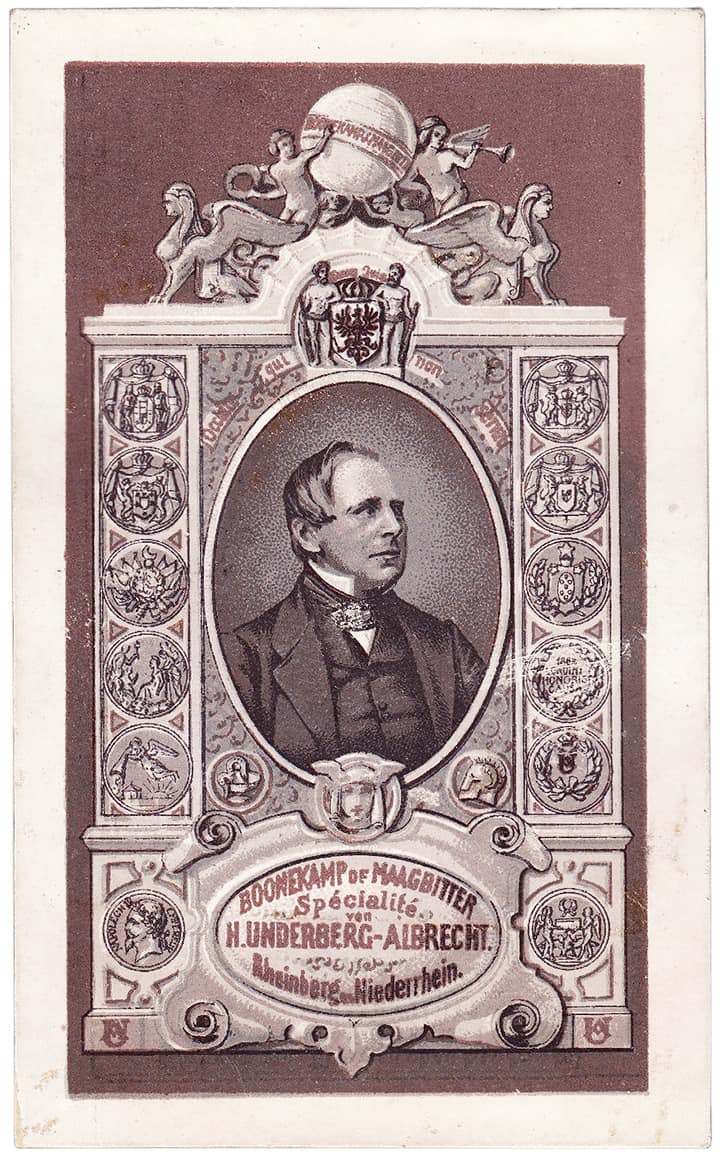 The “Boonekamp of Maagbitter” is Hubert Underberg-Albrecht from Rheinberg who in 1846 and 1851 deposited as a product recipe sample with the Commercial Register. In 1894, the Law on the Protection of trade names could not be established so he used  Underburg Boonekamp Bitters for his brand. You can see an advertising trade card from the 1876 Philadelphia Centennial Exposition above which is currently on eBay. His brand is probably the most widely recognized Boonekamp Bitters. 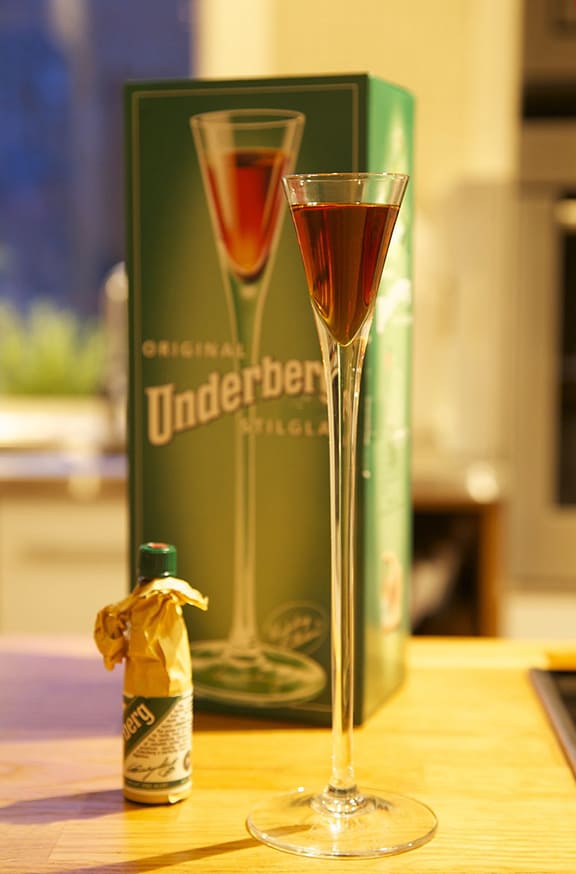 Boonekamp today belongs to the range of many manufacturers of herb liqueurs. Typical is the distribution in small bottles of dark glass as serving size of “stomach therapeutic” in fatty foods. I like the glass of Underberg with typical portion-sized bottle and packaging above. 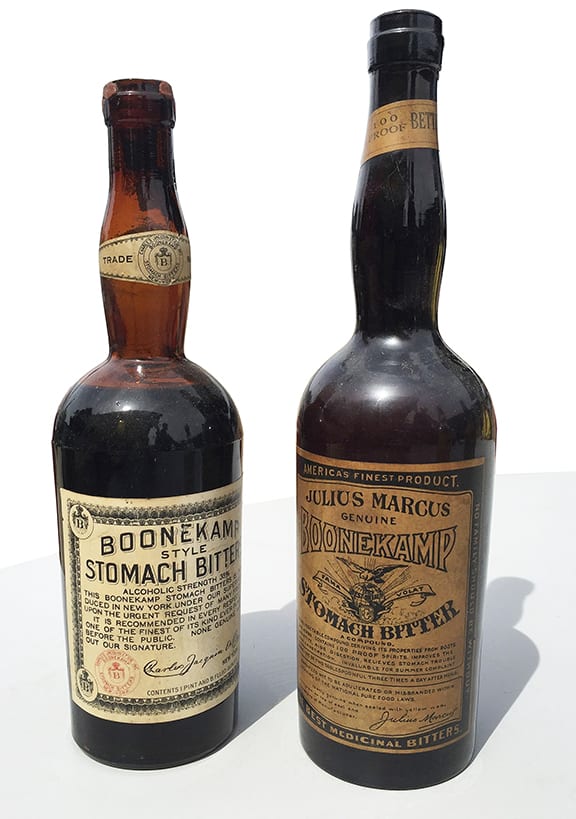 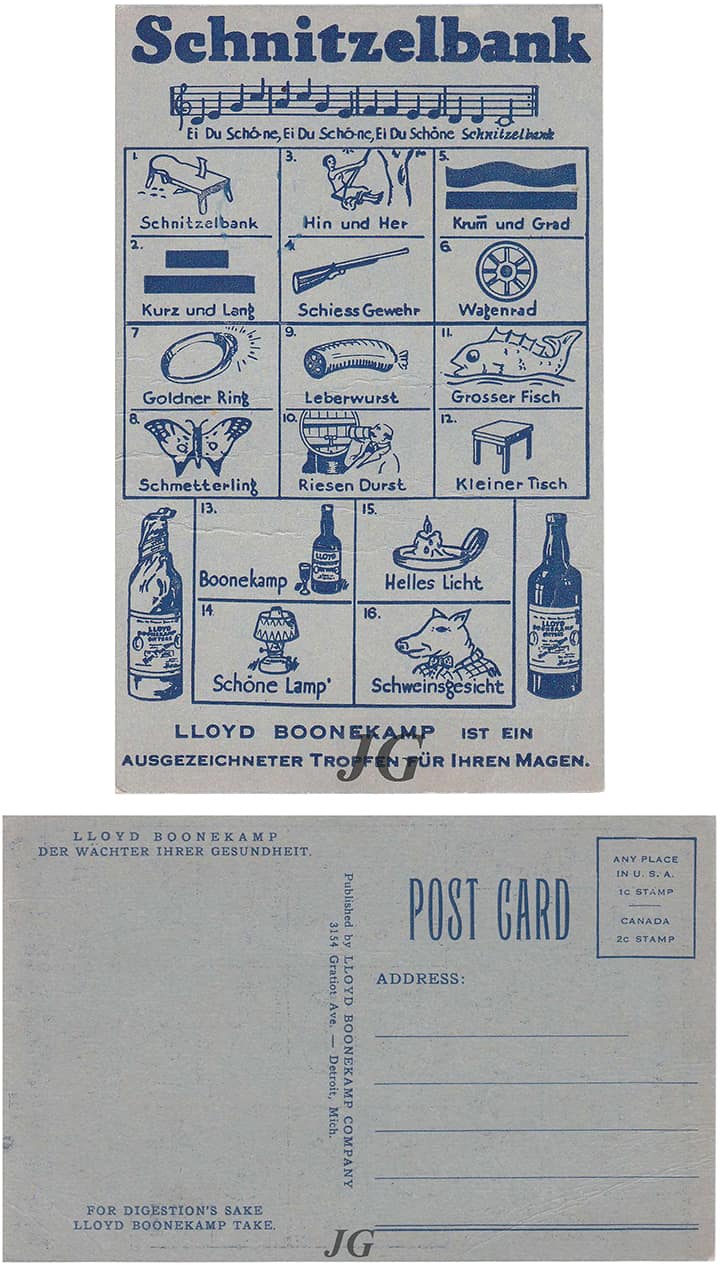 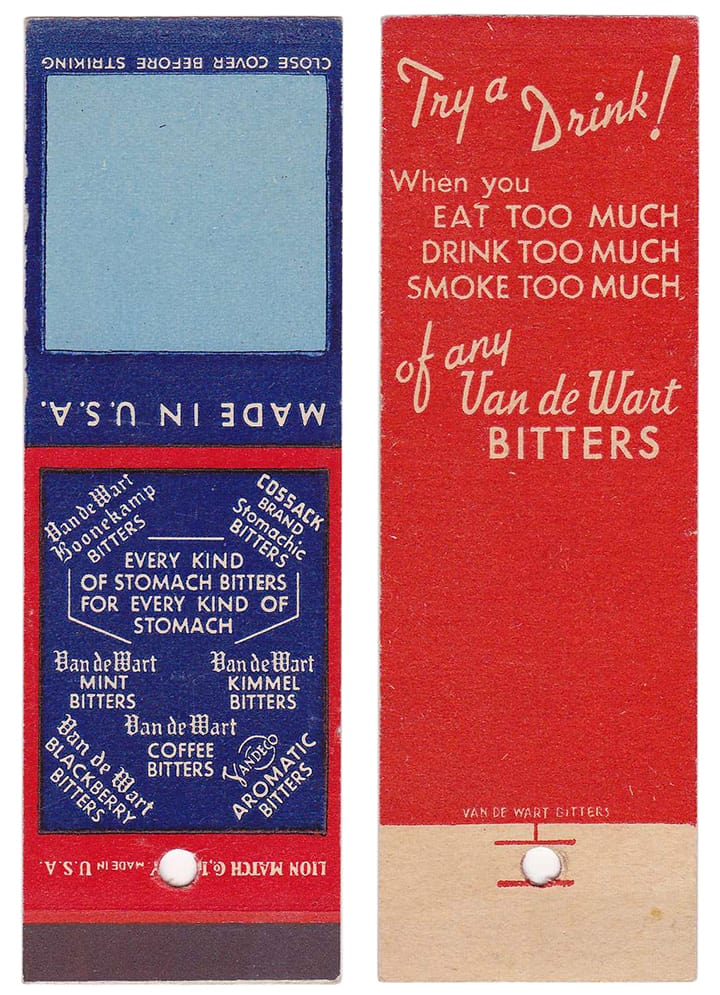 Here are some more fabulous trade cards from the Joe Gourd collection representing the H. Underberg-Albrecht’s Boonekamp of Maag-Bitter. The Luyties Brothers were United States and Canada sole agents of this award winning brand.. 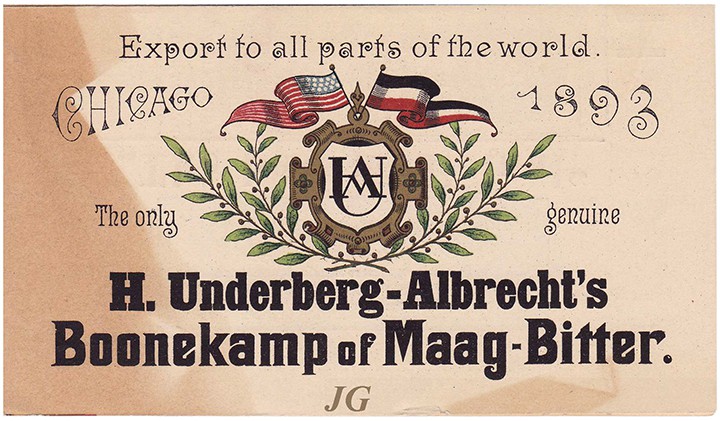 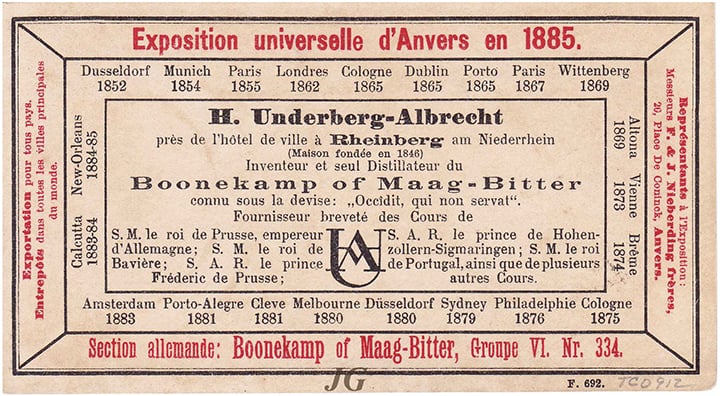 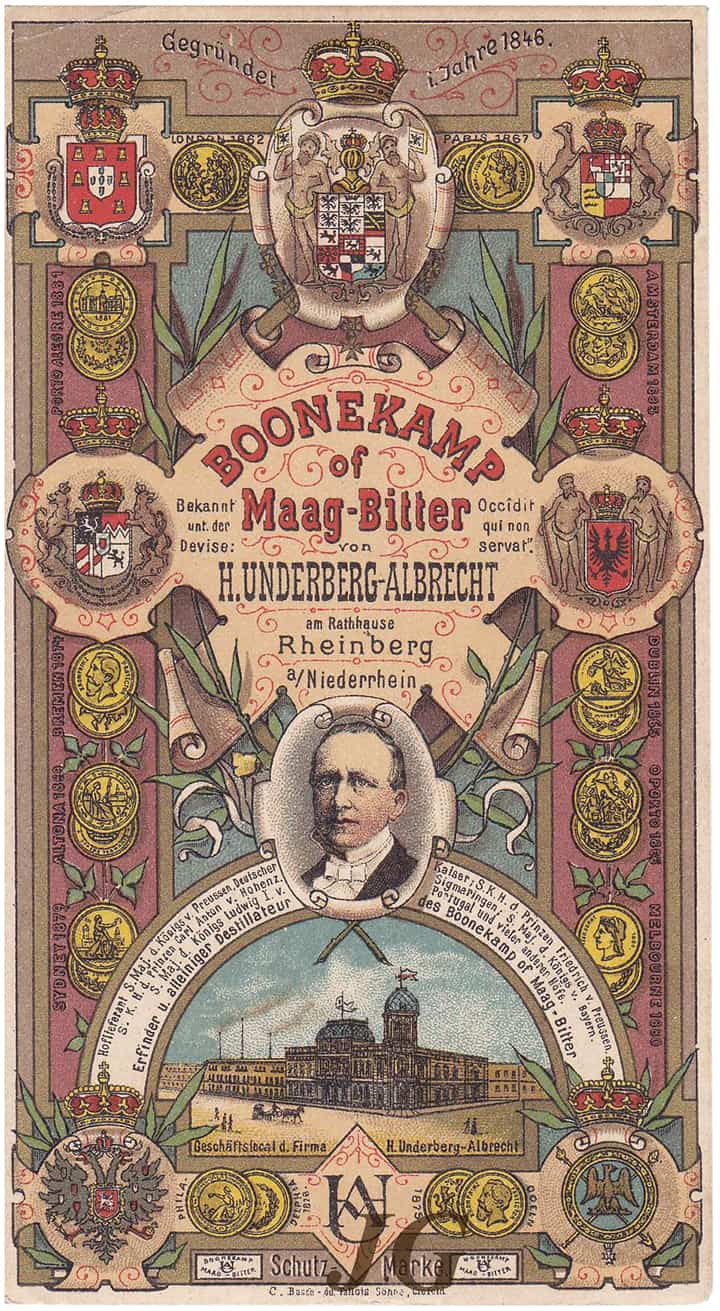 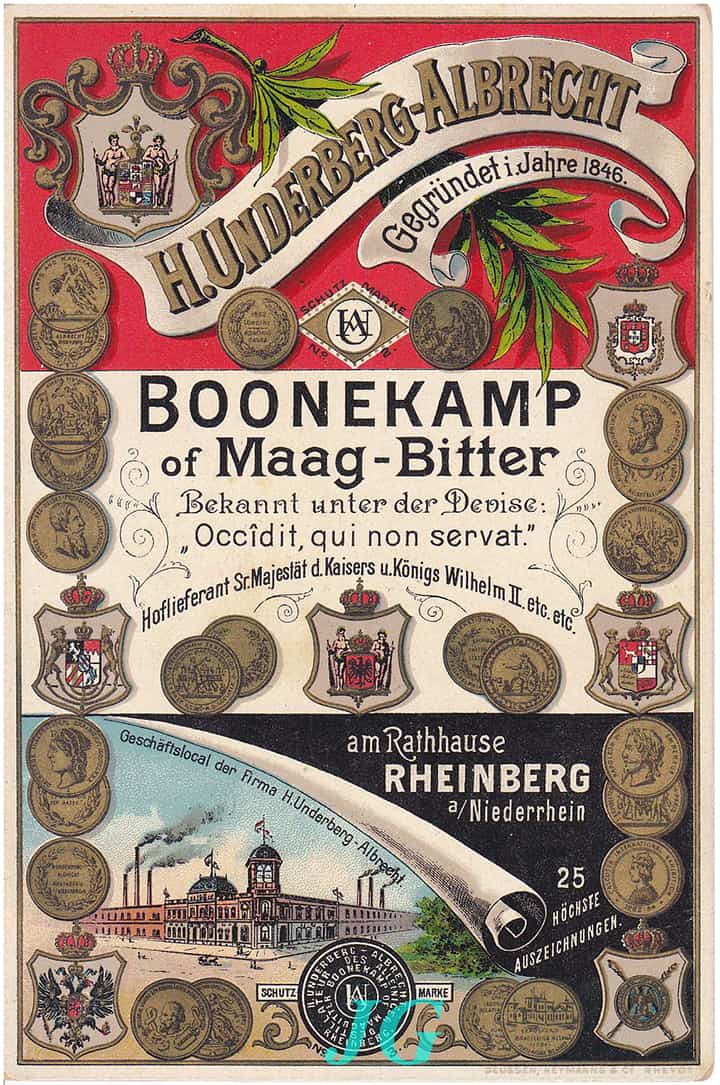 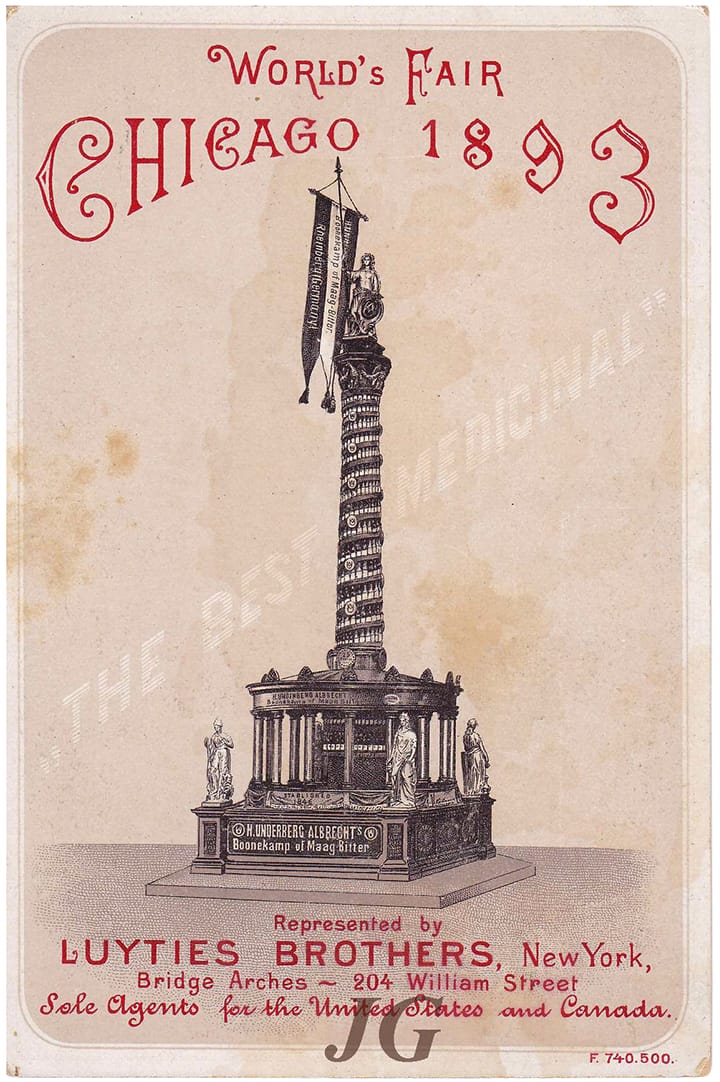 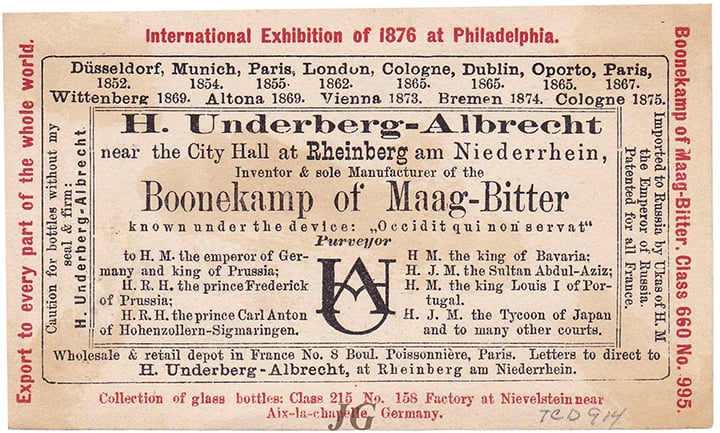 Ferdinand Meyer V is a native of Baltimore, Maryland and has a BFA in Fine Art and Graphic Design from the Kansas City Art Institute and School of Design. Ferdinand is the founding Principal of FMG Design, a nationally recognized design consultation firm. Ferdinand is a passionate collector of American historical glass specializing in bitters bottles, color runs and related classic figural bottles. He is married to Elizabeth Jane Meyer and lives in Houston, Texas with their daughter and three wonderful grandchildren. The Meyers are also very involved in Quarter Horses, antiques and early United States postage stamps. Ferdinand is the past 6-year President of the Federation of Historical Bottle Collectors and is one of the founding members of the FOHBC Virtual Museum.
View all posts by Ferdinand Meyer V →
This entry was posted in Advertising, Bitters, History, Liqueurs, Liquor Merchant, Medicines & Cures, Spirits, Trade Cards and tagged bitters, Boonekamp, Gautier, Gourd, Ham, Holland, Jacquin, Leidschendam, liqueur, Lloyd, Luyties, Magen, Marcus, Stomach, style, Underberg, Underberg-Albrecht, Van de Wart. Bookmark the permalink.