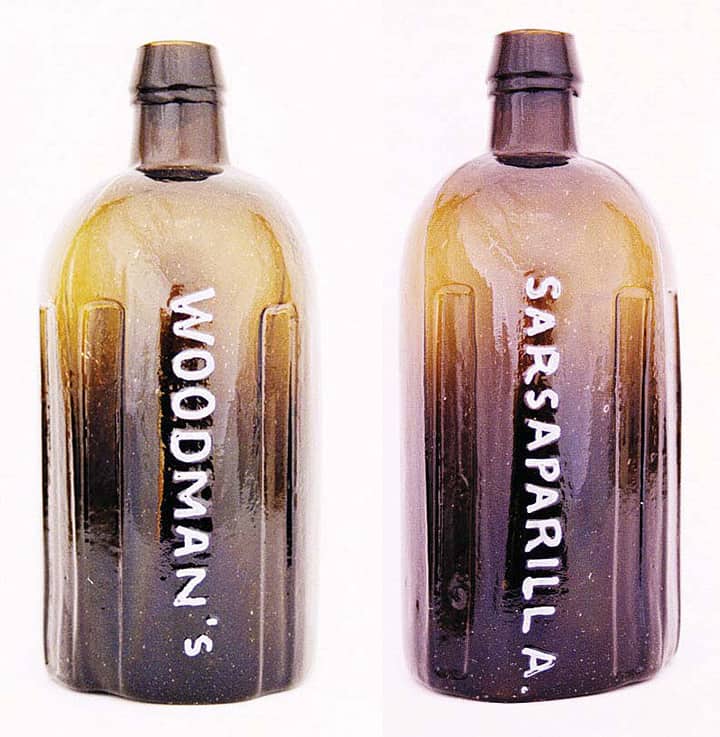 Yesterday we were in Mississippi posting on the Dr. Emanuel’s Sarsaparilla which is a great pontiled bottle from Vicksburg, probably dating to the 1840s. It is pictured below. That post prompted an e-mail which is represented below from Chris Brumitt and the accompanying image at the top of the post which is from the Mississippi Antique Bottles and Jugs book. Notice the similar shape of the two bottles.

Mr. Meyer, Thank you for doing a post on the Dr. Emanuel’s Sarsaparilla, and providing more information on the life of Morris Emanuel. Vicksburg has some great bottles. In general, Mississippi has some very early bottles, along with several rare bitters, that are near impossible to obtain for a collection. Vicksburg is my hometown, I primarily collect Vicksburg bottles, mainly because I feel I have a connection with their history.

Again thank you for the post on the Emanuel’s. I have always felt that Mississippi does not receive any credit for our history of bottles, with the cities of Memphis, New Orleans, and Mobile surrounding our great state. Bottles from those cities seem to carry the spotlight in the South, and we seem to stay in the shadows.

Thank you and your wife for your website, and for all the work done to carry on the history of bottles and the fascinating hobby of bottle collecting. Regards, Chris

Oliver Otis Woodman must have been some character. He was described as a “sharp dealer” by some accounts and seemed as comfortable in New York, Washington D.C. and Paris circles as he did in Vicksburg, Mississippi and New Orleans, Louisiana. Woodman was a ‘Easterner’ who was born on 4 October 1818 in Wilton, Franklin, Maine. His father was Captain Ephraim Woodman (1787-1859) and his mother was Sally (Sarah) B. Otis (1797-1822).

Caroline Thomas (1824-1907), his wife, was from Washington, D.C. She would play a major role here. A note I found said that “the year they were married, Woodman buys at least two more slaves, an aging couple named George and Vinny Kitteral”. I think that they all were soon to go on a scary house slide. 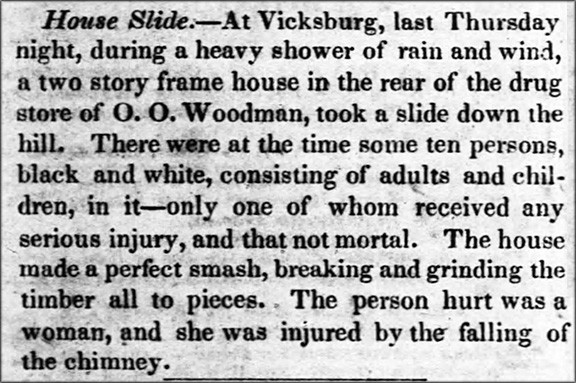 House Slide: I would assume this was Woodman’s house containing his family and slaves as it was in back of his drug store – The Times Picayune, Wednesday, December, 11 1844

Oliver O. Woodman started out in business in Vicksburg as Warren County tax records show him as a druggist in 1843. He loses his house in a mud slide in 1844 (see above) but his drug store seems to have survived. Advertisements for his business suggest a combination bookstore, newsstand, drugstore and music establishment. The (Dr.) Billings Syrup (pictured below) was one of his big sellers from this time period. 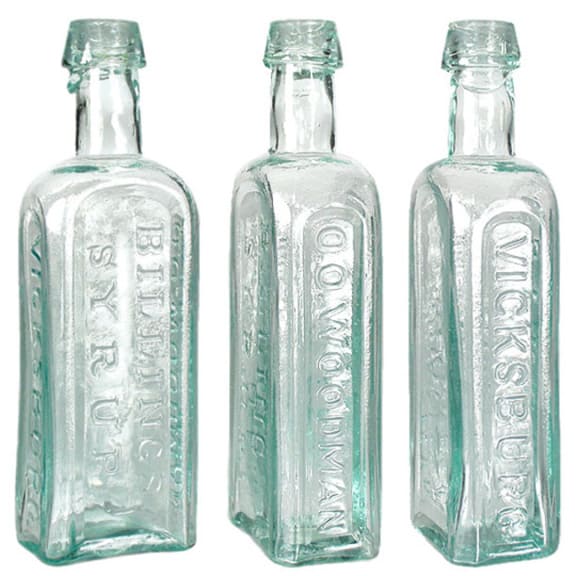 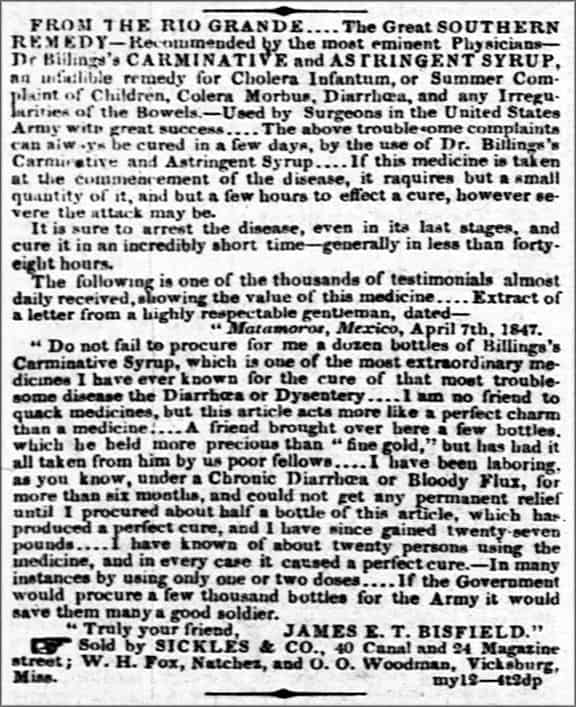 We see movement with Oliver O. Woodman in 1852 as he forms a copartnership with Stephen Jarvis in New Orleans at the corner of Common and Magazine streets. Woodman still maintains his drug store in Vicksburg. From 1856 to 1860, most of his advertising is coming out of New Orleans from the same address. Jarvis seems to have dropped off. Possibly Woodman has moved entirely from Vicksburg. 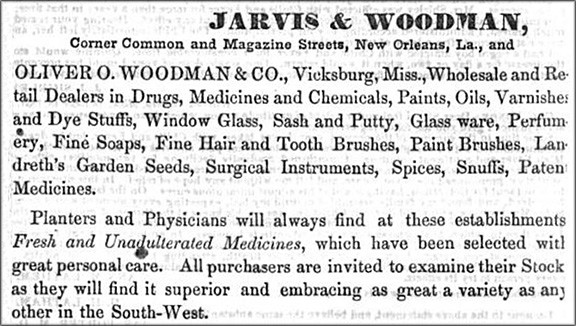 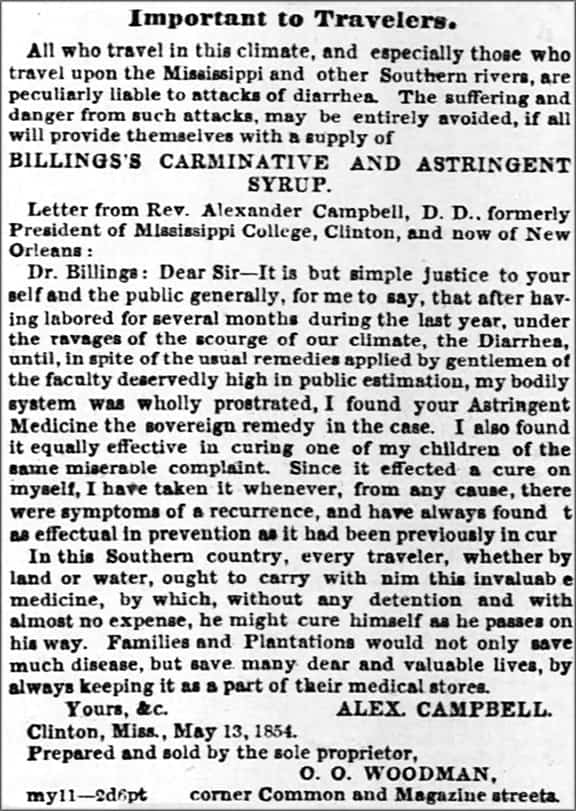 The exceptional Woodman’s Sarsaparilla (W 140) is classified by pontiled medicine collectors as one of the ’25 Most Desirable Pontiled Medicines’. It appears in the #23 position. The bottle is 8 1/4″ tall x 3 1/4″ diameter and cylindrical. It comes in black olive-green and deep olive amber and has 4 indentations with a double tapered collar with an iron pontil. They are extremely valuable as you can see from past sales which are but a few. 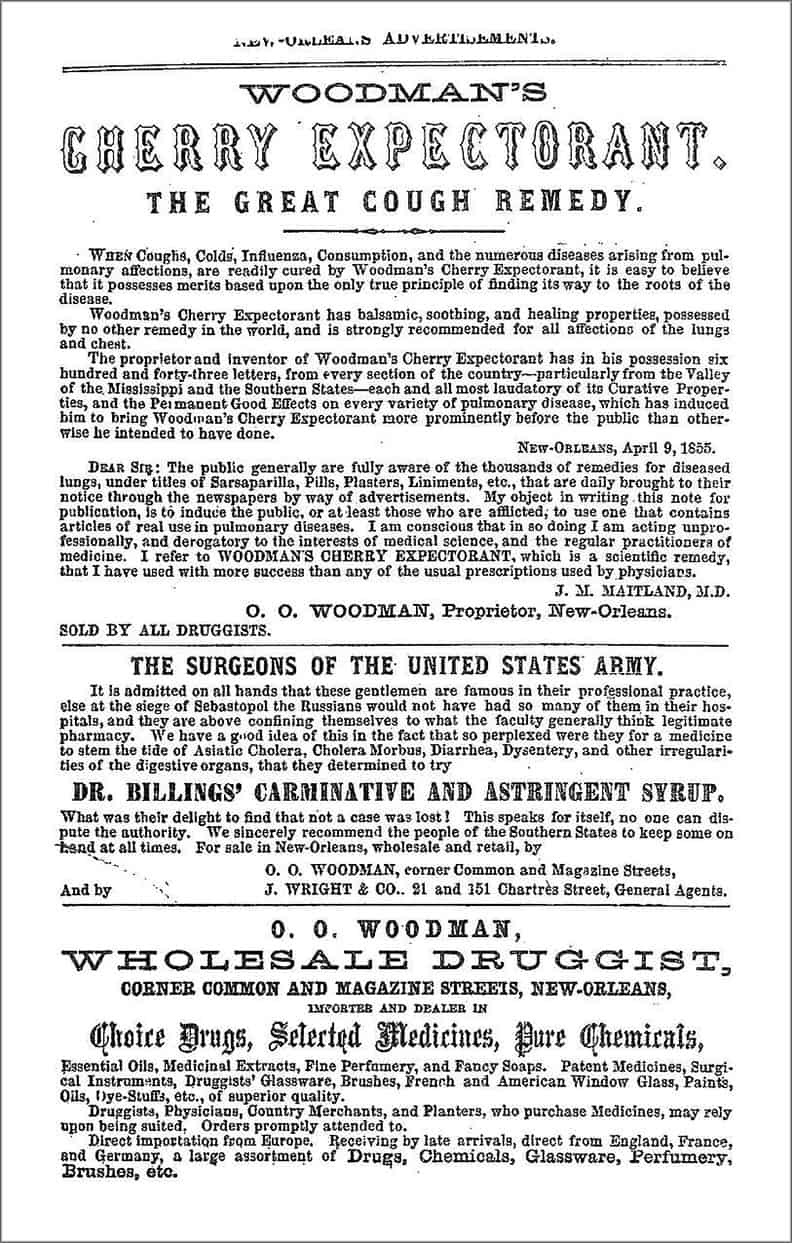 Here is gets a bit juicy. Apparently his wife Caroline or Carrie had some health problems, or so Oliver O. Woodman thought or said, so he basically takes her on a trip to Europe and leaves her in Paris. That was a mistake as her heart and purse seem to have been taken by a Frenchman she met named Gardner. Here Woodman comments about the episode, “A Mr. Gardner Furniss of this City has been engaged in an intrigue with my wife and by means of drugged wine has obtained chriminal [sic] intercourse with her. And by threatening to take my life and to expose her obtained a large amount of money from her.”

Woodman then commits her to a private Lunatic Asylum and it ends up in court as she wants her release. He fears that the couple is scheming to get her a divorce from him and get at his money. You can read about it below in “Close of the Woodman Case in New York – A Tale of Romance” in 1857.  Actually Woodman would spend a lot of time in court in his last years.

He dies on 30 August 1859 in Conyer Springs, Botetourt, Virginia. He was only 42 years old. Caroline goes on and lives another 50 years. I guess she was in good health after all. Bet she got his money too, and Gardner.

1844: Woodman’s Vicksburg house, in back of his drug store, containing his family and slaves in House Slide (see clipping above)  – The Times Picayune, Wednesday, December, 11 1844

1844: The Vicksburg almanac, for the year 1844. Calculated for the meridian of Vicksburg, lat. 32, 20 north, long. 91 west of Greenwich. Containing a complete and accurate court calendar for the states of Mississippi and Louisiana. – Published by O.O. Woodman, bookseller and druggist, Washington Street., [1843]

1849: Book: The great Southern remedy, recommended by the most eminent physicians: Dr. Billings Carminative and Astringent… by Oliver O. Woodman, 1849

1852-1858: Book: Woodman’s Cherry Expectorant: For the Certain Cure of Coughs, Colds, Influenza, Croup, Bronchial Affections, Consumption and All Diseases of the Lungs in the Incipient State : Also for the Relief of Consumption in Advanced Stages : Prepared by O.O. Woodman … New Orleans, La

1857: On 21 August 1857, O. O. Woodman a druggist from Vicksburg, Mississippi, wrote, from the city of New York, to Jacob Thompson [Secretary of the Interior 1857-1861, Congressman from Mississippi, 1839-51] in Washington, DC, about the behavior of Gardner Furniss. Mr. Woodman wrote “A Mr. Gardner Furniss of this City has been engaged in an intrigue with my wife and by means of drugged wine has obtained chriminal [sic] intercourse with her. And by threatening to take my life and to expose her obtained a large amount of money from her. In one letter to my wife he asserts that he had obtained an appointment from the Secretary of State to go to Europe …”

1858: The Woodman Divorce Case.; SUIT OF O. WOODMAN, IN NEW-ORLEANS, FOR A DIVORCE FROM HIS WIFE–THE SCENES AT THE NEW-YORK HOTEL–“BABIE” FURNESS. SECOND DISTRICT COURT–JUDGE MORGAN.—This suit for divorce was brought in this court last Autumn, by O. O. Woodman, against his wife, nes Caroline Thomas. The answer of defendant was subsequently filled on the 1st of December, in which the allegations of plaintiff are denied, We were refused a copy of the answer by the Clerk of the Court, and were, and are still, unable to give it to our readers on that account… – New York Times, July 1, 1858