I reported a few months back of a new example of the extremely rare, Dr. DeGurley’s Herb Bitters. This bottle is a killer and has a motif of a five-story house embossed on the side, just like an Edward Wilder Bitters. You see, I had been contacted about a recent find.

The subject bottle is pictured at the top of the post. Here is the original e-mail:

Was trying to research a bottle I wish to sell and found your website. Would like to contact John Panella or any other collectors of DeGurley’s Bitters bottles. The bottle my family has is a DeGurley’s Herb Bitters bottle. It was found on property we once owned in West Virginia. It appears to be a dark brown in color (would guess it’s dark amber) and is intact and in great shape except for a small chip (hole) in one of the bottom corners. I have enclosed two pictures of it, and can send you more if you are interested. One side says “DeGurley’s Herb Bitters”, one side has “Manufactured Baltimore MD” one side has windows on it and one side is plain. Any help would be appreciated. Robert

I have actually written about this bottle before. Read: John Panella and his special Dr. DeGurley’s Herb Bitters.

After discussions with the owner, I suggested that he sell the bottle at auction, even with the damage. It is now with John Pastor with American Glass Gallery for an upcoming auction. 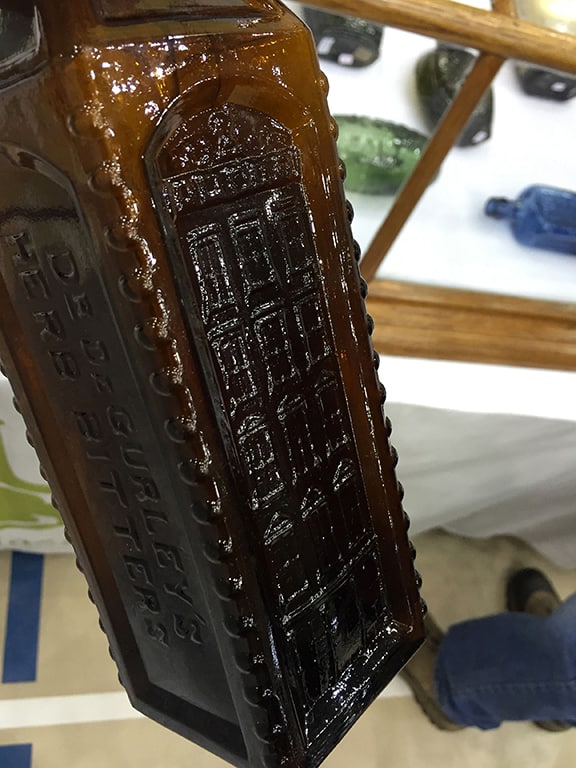 Here is the DeGurley’s Bitters that someone contacted me about at Peachridge Glass. This picture is from the Baltimore Antique Bottle Show, American Glass Gallery table. 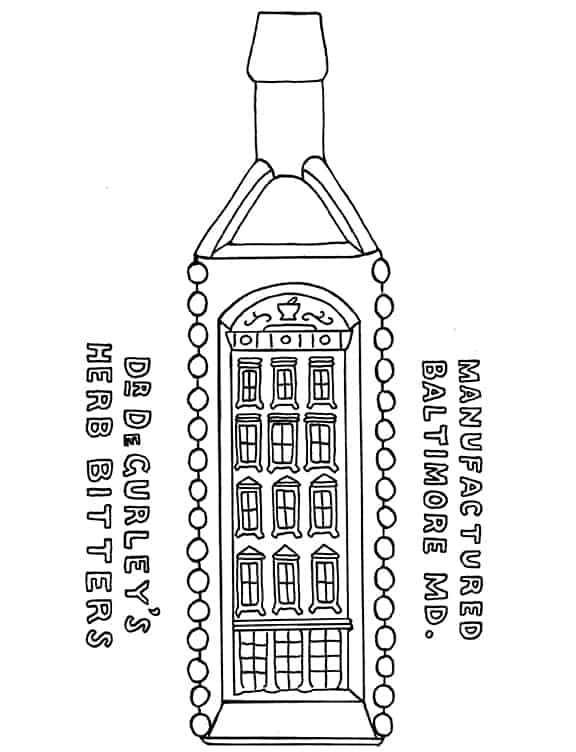 Here is the best possible example of this bottle pictured in Bitters Bottles Supplement. 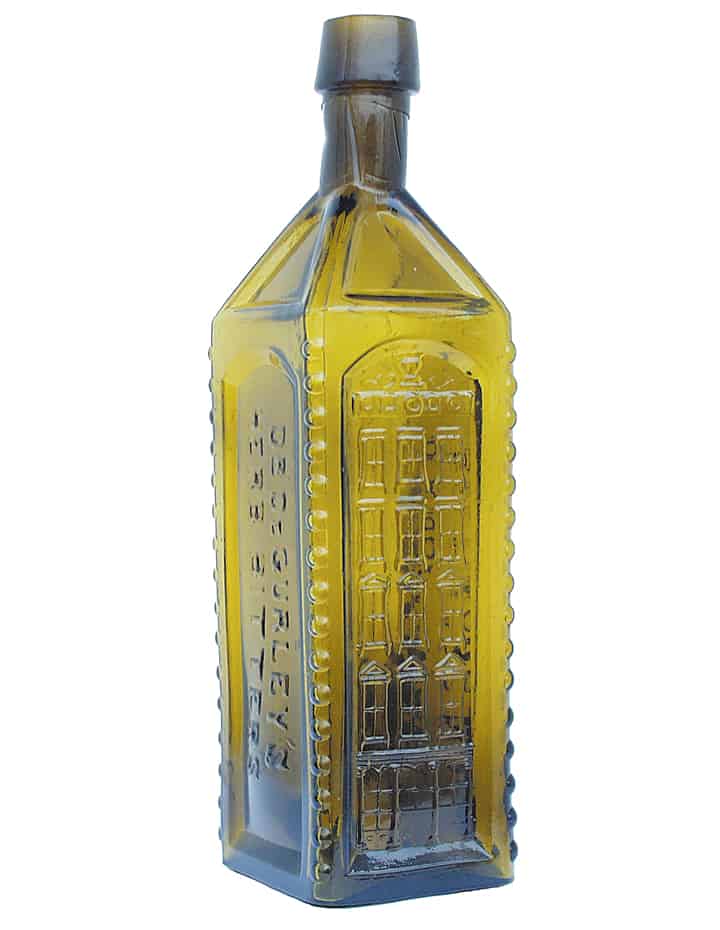 Also in the DeGurley’s news is a square, labeled example of this bitters that recently showed up online at the recent Glass Works Auctions, “Winter Classic” auction. Quite a surprise. Notice that the embossing says. “DR DE CURLEY’S” with a “C” instead of a “G”. Some glass maker really muffed that up! The label reads, “DeGurley’s Herb Bitters, etc. For Sale by Geo. W. Johnson & Co., A. Vogler (another misspelling, should be Vogeler) & Co., Wholesale Druggist, Baltimore, Md.” An example also sold on eBay back in 2003. 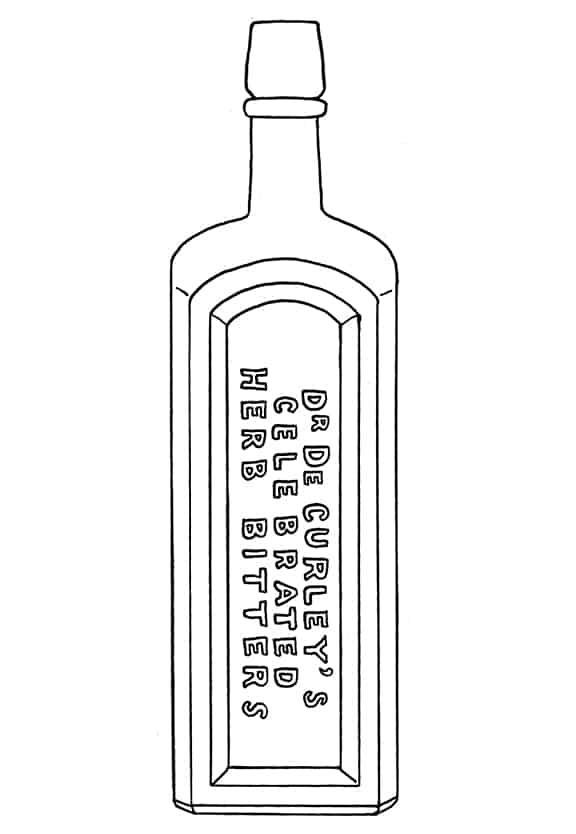 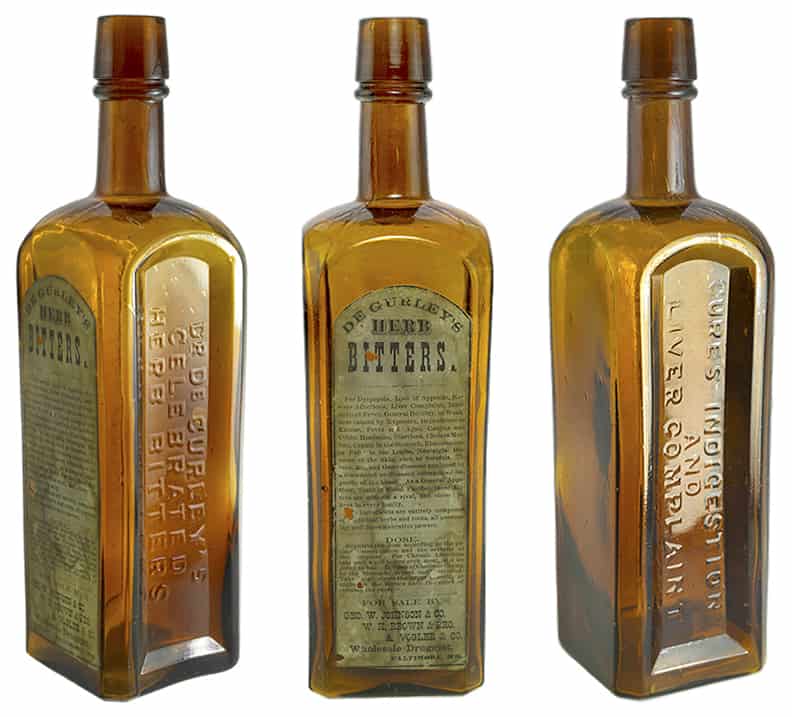 A labeled, Dr. DeGurley’s Herb Bitters. Notice that the embossing says “DR DE CURLEY’S” with a “C” instead of a “G” – Glass Works Auctions

Ferdinand Meyer V is a native of Baltimore, Maryland and has a BFA in Fine Art and Graphic Design from the Kansas City Art Institute and School of Design. Ferdinand is the founding Principal of FMG Design, a nationally recognized design consultation firm. Ferdinand is a passionate collector of American historical glass specializing in bitters bottles, color runs and related classic figural bottles. He is married to Elizabeth Jane Meyer and lives in Houston, Texas with their daughter and three wonderful grandchildren. The Meyers are also very involved in Quarter Horses, antiques and early United States postage stamps. Ferdinand is the past 6-year President of the Federation of Historical Bottle Collectors and is one of the founding members of the FOHBC Virtual Museum.
View all posts by Ferdinand Meyer V →
This entry was posted in Bitters, Figural Bottles, History, Medicines & Cures and tagged Baltimore, bitters, building, Caldwell, complaint, Cures, De Curley, DeGurley, Herb, Johnson, Liver, maryland, Paca, Parker, square, Vogeler. Bookmark the permalink.