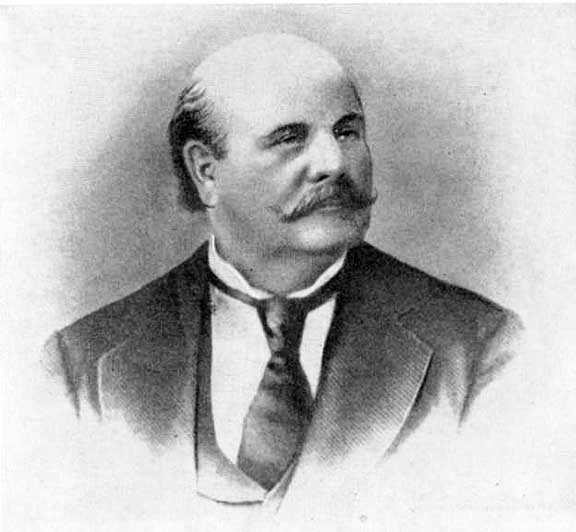 Tom Phillips sent me a packet of FOHBC convention information and with it was this Commission Bill below for Dr. J. H. McLean’s Family Medicines at 314 Chestnut Street in St. Louis, Missouri. That is Dr. McLean pictured above. OK, so far, that is pretty cool. Neat graphics including an illustration of Dr. McLean’s Grand Tower Block in the upper left corner and Dr. McLean’s Laboratory in the upper right corner. Obviously a pretty big operation with lots of product and distribution. So why did he send it to me? I carefully look at the Dr. McLean products listed neatly on the front of the bill. I see Cordial, Liniment, Quinine and Vermifuge listings, but no Bitters listings? 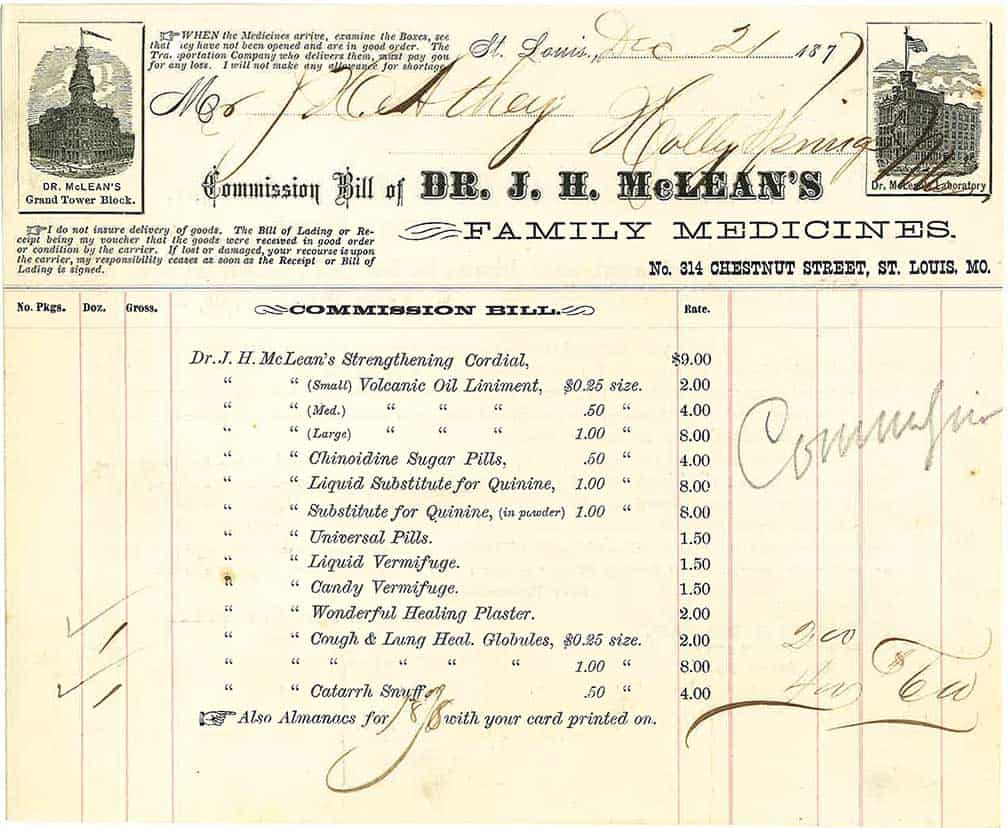 So I turn it over and see copy on the back. I usually don’t see printing here. Something from the Supervisor’s Office of the United States Internal Revenue from the District of Missouri, Kansas, Arkansas, New Mexico, Indian Territory and Texas dated January 19th, 1876.

The communication is signed by FERD. MEYER. Now that is cool. Many Germans settled in Baltimore, Cincinnati, St. Louis, Fort Wayne and San Antonio among other locations. While searching my own ancestry, I have come across other Ferdinand Meyer listings besides my family line in Baltimore. I am Ferdinand Meyer V and have no middle name. 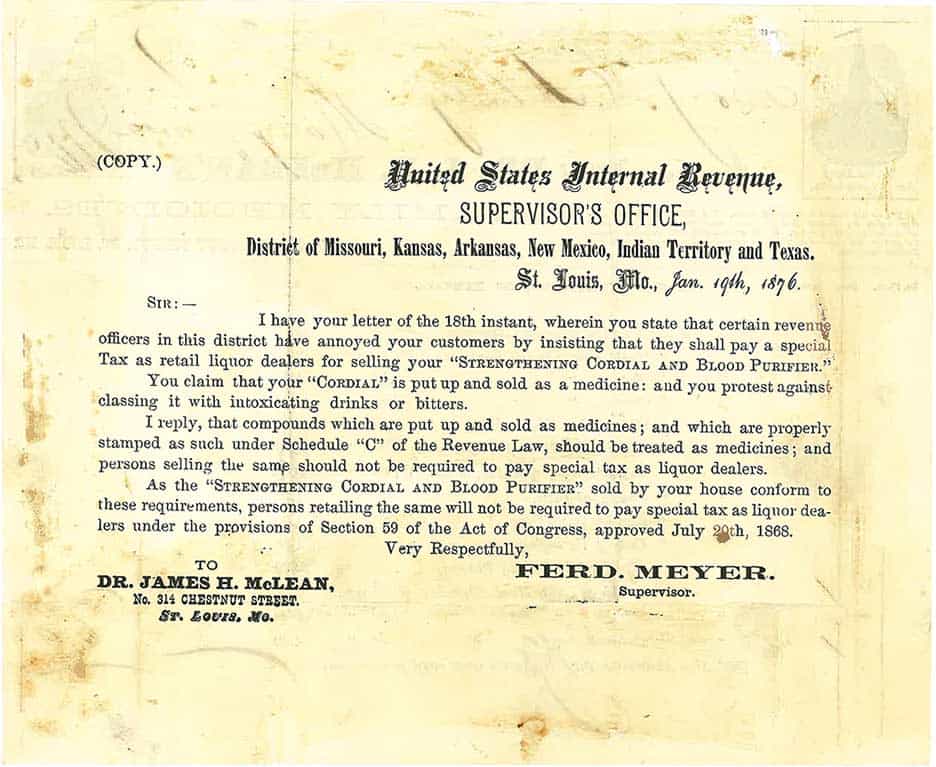 What is interesting here, is that Dr. McLean sent Agent Ferd Meyer a letter saying that certain revenue officers in his district have annoyed his customers by insisting that they pay a special Tax as retail liquor dealers selling his “Strengthening Cordial and Blood Purifier”. Dr. McLean claimed that his “Cordial” was put up and sold as a medicine and protested against classifying it with intoxicating drinks or bitters even though The Strengthening Cordial was reputedly 85 to 100 proof alcohol. Ferd Meyer replys and lets him off the hook. 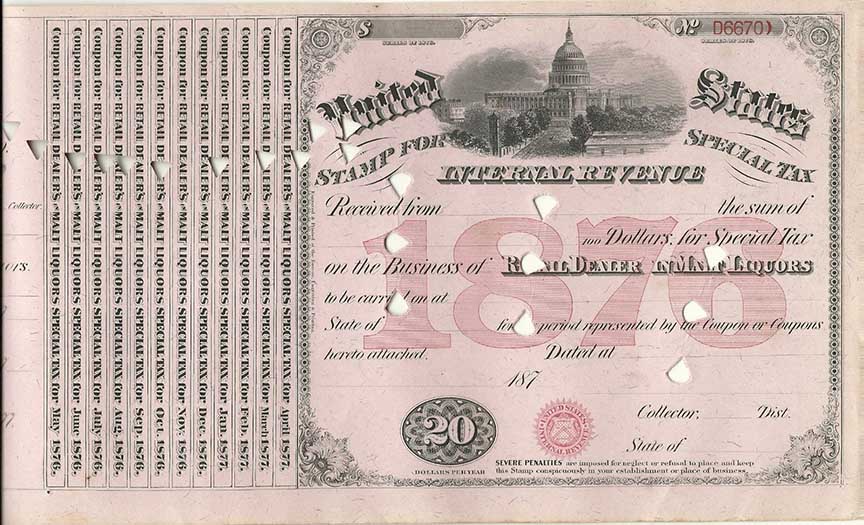 A quick search of a St. Louis city directory in 1876, the date of the Ferd Meyer signature, reveals five Ferd Meyer listings in the 1876 St. Louis City Directory. One is our Ferd Meyer, U. S. Revenue Agent, with an office on the Third Floor of the Post Office Building. I bet Dr. McLean and Ferd Meyer knew each other. St. Louis at that time was the epicenter of illicit and fraudulent alcohol production as far as the stunts to avoid paying taxes.

Five Ferd Meyer listings in the 1876 St. Louis City Directory. One is our Ferd Meyer, U. S. Revenue Agent, with an office on the Third Floor of the Post Office Building.

James McLean was born in Scotland in 1829, and emigrated with his father to Nova Scotia shortly thereafter. When McLean was 13 years old he left home and followed the frontier west as far as St. Louis, where he attended a medical college. He decided, at this time, to concoct a preparation known as a “strengthening cordial” which, according to advertisements, would cure just about anything from pink eye to paralysis. The returns from his patent-medicine sales, which were practically all profit, soon made McLean immensely wealthy. In pursuing his professional career unaided and alone, he amassed a large fortune. The people of St. Louis know well of Dr. J. H. McLean’s Grand Tower Block and his vast Laboratory. The Dr. J. H. McLean’s Strengthening Cordial and Blood Purifier, with his other prepared medicines could be found in drug stores in nearly every village, hamlet and home in the United States including in many places in Europe as well.

Fulfilling this mission, the Doctor’s great heart burned on to do more for his fellow men. Hearing of the killing and slaughter of the brave soldiers in Europe and Asia at the will of their rulers, he resolved to develop such terribly destructive weapons of war, arms, torpedoes, and fortresses, and such perfect defenses, as would compel all nations to keep peace towards each other. This is totally another chapter in Dr. McLeans life.

“Washington, June 15, 1875.
“Sir: You have this day been instructed by telegraph to proceed to Saint Louis, and assist Supervisor Meyer in all revenue matters in his district.

“Revenue Agent Crane, who has been at Saint Louis since the inauguration of the exposure of the recent frauds, will be able to give you such information as to the progress of the work already begun as will enable you to work intelligently hereafter. Supervisor Meyer, who has been recently appointed, is not sufficiently familiar with internal revenue matters but that he will need the assistance of experienced revenue agents for some time.

“Before leaving Saint Louis, you will visit Saint Joseph and examine the rectifying-house of Westheimer, who is believed to have been a dealer in much of the illicit goods manufactured in Saint Louis. It would also be well while at Saint Joseph to examine the different distilleries located there.

“Information has also reached this office that S. F. Hutchinson, distiller, Missouri City, has been offering whisky at 81.05 per gallon, within the past ten days or two weeks. As it would be impossible for spirits, on which had honestly been paid the tax, to be sold at any such price without loss, it would be well for you to give his distillery a thorough overhauling.

“You are requested to report frequently and fully to this office the progress of your work, and to act in harmony with all the revenue officers in Saint Louis. “Respectfully,

Q. What day did you get to Saint Louis ? – A. My recollection is that it was the 17th day of June.

Q. What were your duties? –  A. I was engaged in helping the officers to make the various investigations, and posting them up generally on their duties, and transferring the office of the old collector to his successor.

Q. Was Maguire in office when you went there! – A. Yes, sir.

Q. What was the purport of it? – A. On the 21st of June, Supervisor Meyer, Revenue Agent Crane, and myself made a joint report to the Commissioner by telegraph, asking the immediate suspension from office of Collector Maguire, of which I have a copy.
By Mr. Cochrane:

Q. Where is the original? – A. The original, I suppose, is among my papers at Detroit.

“Collector Maguire misstated facts, in his letter to you of eighth instant, concerning collection of taxes on April special list. District attorney did not advise suit instead of distraint, and there is property available to secure a large part of these taxes; but to do this, and for the interest of the Government, Collector Maguire will have to be immediately suspended, Shall I suspend him?