“Enjoyed your post on Coleman’s Bitters. While I don’t have a trade card for these bitters, I might have something you could possibly tie in. It is a trade card for an unlisted Coleman’s Tonic Bitters. These bitters were prepared by F.B. Coleman, Druggist, 61 Congress St., Portsmouth, New Hampshire. Perhaps a family member? In your post, you mentioned an historical connection to the northeast United States, possibly Boston or New York. My trade card dates to about 1880-90. This would be much later than the A. W. Coleman Bitters of Mobile. Could they be distant relatives? Calls for some more research?” 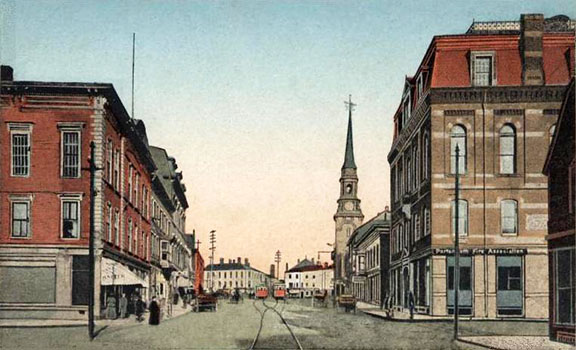 Congress Street in 1905 where Fred B. Coleman had his apothecary. Could very well be one of the establishments represented on this post card, especially if that is Vaughan street intersecting Congress Street.

FRED B. COLEMAN, owner and proprietor of a well equipped drug store at the corner of Congress and Vaughn streets, Portsmouth, N.H., where he has been located for the last forty years, is a well known and popular citizen who has taken an active part in local affairs. He was born in this city February 17, 1855, a son of Joseph Wiley and Catherine (Rand) Coleman. Both parents were natives of Rockingham County, the father being a contractor and builder for many years. He is still living, being now in his ninety-first year. He and his wife had five children, of whom the only survivors are Fred B., and Florence, wife of Rev. John Everingham, a Baptist minister of Warren, Maine. Mrs. Catherine Coleman is now deceased.

Fred B. Coleman, after acquiring his education in the common and high schools of Portsmouth, entered the drug store of J. H. Thacher where he learned the business. June 1, 1874, he took charge of his present store, which had been established by Mr. Thacher in 1865. On May 1st, 1878, he bought out the business and has since conducted it very successfully on his own account.

A Republican in politics, he takes an active interest in local affairs and for two years was a member of the common council. He is a Free Mason of high rank, having taken all the degrees in the order including the 33d, which he took at Chicago in September of the present year (1914). Mr. Coleman was married in 1876 to Mary Griffin, a daughter of Orwin and Mary (Locke) Griffin. Her father, a native of Lowell, Mass., is now in the employ of the Rockingham County Light & Power Company. He is one of the old and original members of the Independent Order of Odd Fellows. His wife, Mary Locke Griffin, was a member of the old Locke family of Rye, N. H. They were the parents of five children, of whom three are now living, Mary, who married Mr. Coleman, died in June, 1913; Mr. and Mrs. Coleman were the parents of three children, namely: Florence, who married John Horace Peverly and has one child, Donna; Fred W., who is associated with his father in the drug store, and Ruth Abbott, who is an accomplished musician of the Boston Conservatory of Music. Mr. Coleman and family attend the Christian Church. They have a large acquaintance and stand high among the representative people of the city.

As Joe mentioned above, this is an unlisted bitters requiring a number in the forthcoming Bitters Bottles Supplement 2. As far as a relationship to A.W. Coleman, I could find no direct evidence but of course it is possible. There are quite a few Coleman’s in all of the topic cities. Is is interesting that “Tonic” was used in the name of both bitters brands. From the best that I can tell, the Coleman’s Tonic Bitters was sold from about 1880 to 1887, probably in an even tighter date window. I am not aware of any surviving examples. Hopefully one will show up.

1874: Fred B. Coleman runs the store of J. H. Thacher where he learned the business. – A History of Rockingham County, New Hampshire and Representative Citizens

Ferdinand Meyer V is a native of Baltimore, Maryland and has a BFA in Fine Art and Graphic Design from the Kansas City Art Institute and School of Design. Ferdinand is the founding Principal of FMG Design, a nationally recognized design consultation firm. Ferdinand is a passionate collector of American historical glass specializing in bitters bottles, color runs and related classic figural bottles. He is married to Elizabeth Jane Meyer and lives in Houston, Texas with their daughter and three wonderful grandchildren. The Meyers are also very involved in Quarter Horses, antiques and early United States postage stamps. Ferdinand is the past 6-year President of the Federation of Historical Bottle Collectors and is one of the founding members of the FOHBC Virtual Museum.
View all posts by Ferdinand Meyer V →
This entry was posted in Advertising, Apothecary, Bitters, Druggist & Drugstore, History, Medicines & Cures, Tonics, Trade Cards and tagged advertising, Apothecary, bitters, card, Coleman, Congress, Druggist & Drugstore, Gourd, New Hampshire, Portsmouth, Rockingham, Tonic, trade, Vaughan. Bookmark the permalink.