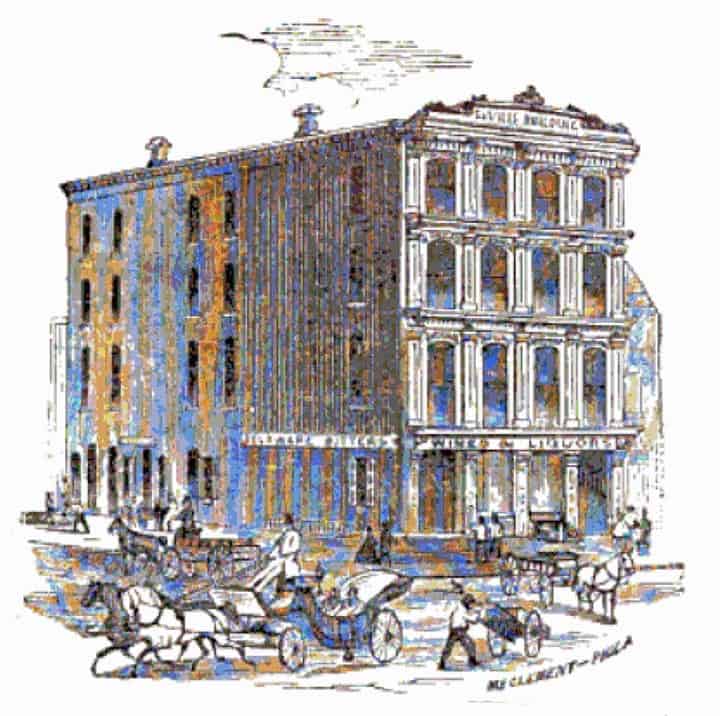 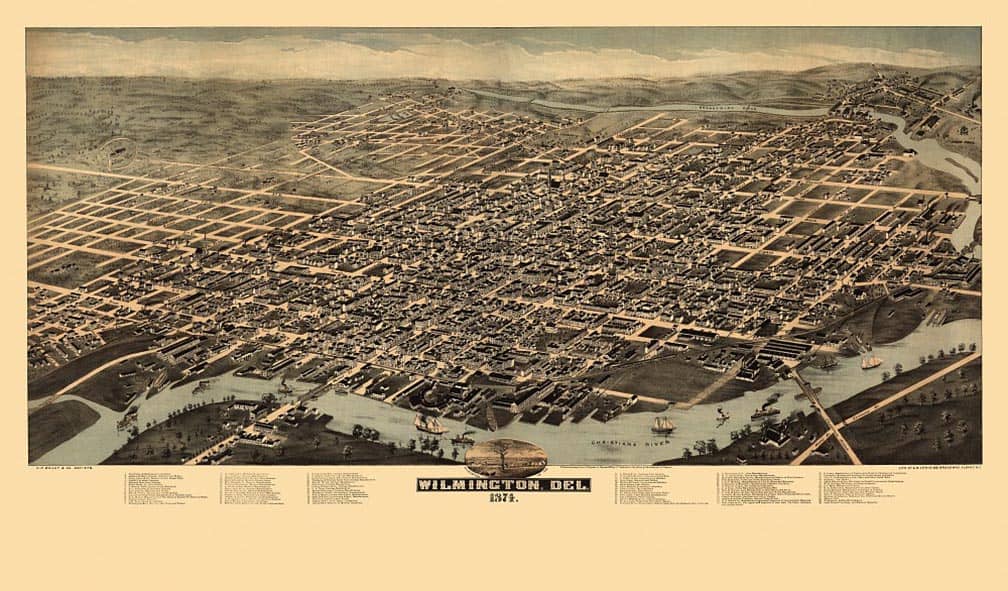 I like the illustration of the SaVille Building in Wilmington, Delaware at the top of this post. Could there be a bitters story here? You bettcha! Look carefully at one of the storefront sign panels and you will see “DELAWARE BITTERS” on one side of the building. Alexander SaVille was the owner of this building at 512 Market Street where he sold wine and liquor. He was also the sole proprietor of the famous “Delaware Bitters”. Someone please find me an example! 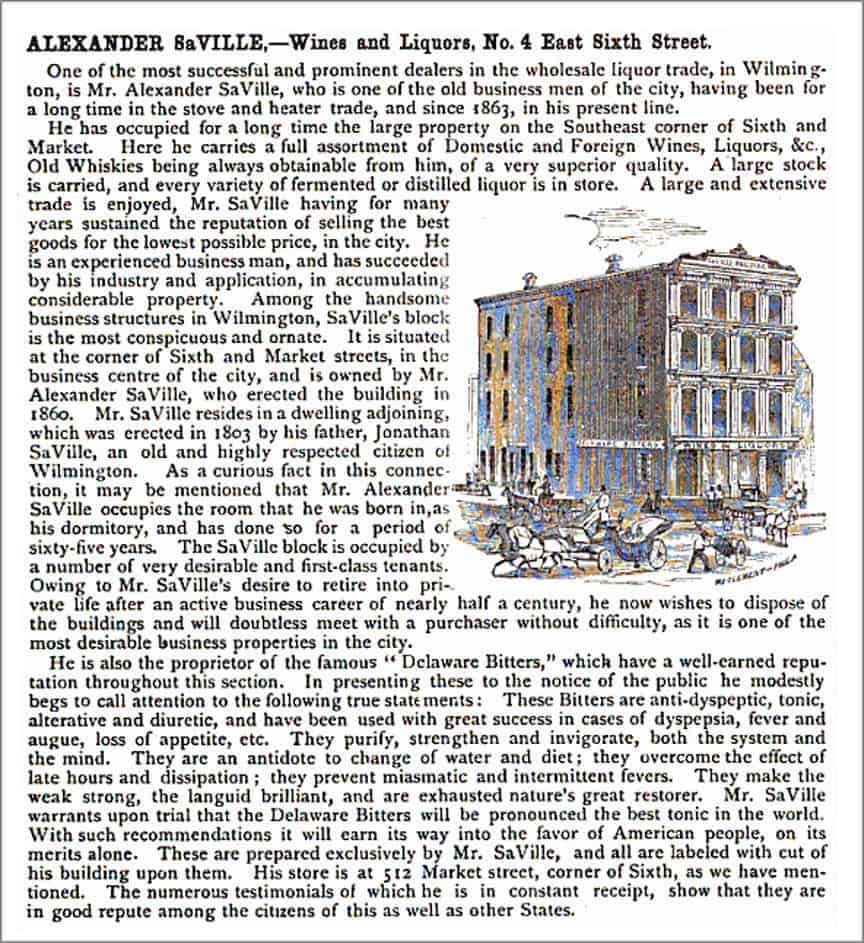 At first I thought the Delaware Bitters was unlisted as I could not find it in the “D” areas of Bitters Bottles or Bitters Bottles Supplement. Then I checked the “S” grouping and sure enough, there it was. 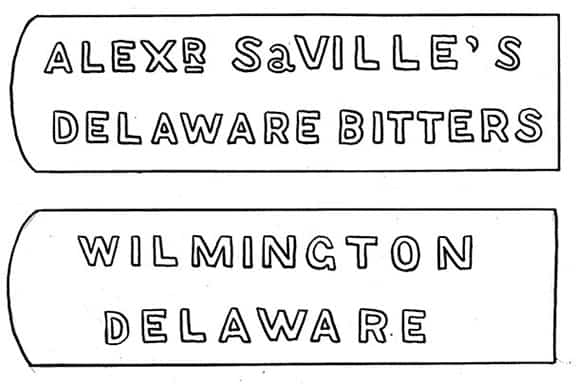 Alexander SaVille was born in 1814 and died in 1887. In 1863 he went into the business of selling wine and liquors in addition to bitters.
Newspaper advertisement 1875.

Alexander SaVille was born in Delaware and was one of the most successful and prominent dealers in the wholesale liquor trade, in Wilmington, Delaware. In early business years he was in the stove, range and heater business and then moved to the liquor business in 1863. He owned a large property on the southeast corner of Sixth and Market where he sold a full assortment of domestic and foreign wines, whiskey, bourbon, rye and other spirits.

He accumulating considerable property including the ornate and handsome business structures in Wilmington, called SaVille’s Block which was located in the center of the city. He erected the building in 1860 and resided in a dwelling adjoining which was erected in 1803 by his father, Jonathan SaVille (1771-1849), an old and highly respected citizen of Wilmington. Alexander SaVille occupied the room that he was born in for just about his entire life. The SaVille block was occupied by a number of very desirable and first-class tenants.

SaVille was also the proprietor of the famous “Delaware Bitters,” which had a well-earned reputation throughout the region. He advertised, “These Bitters are anti-dyspeptic, tonic, alterative and diuretic, and have been used with great success in cases of dyspepsia, fever and augue, loss of appetite, etc. They purify, strengthen and invigorate both the system and the mind. They are an antidote to change of water and diet; they overcome the effect of late hours and dissipation; they prevent miasmatic and intermittent fevers. They make the weak strong, the languid brilliant, and are exhausted nature’s great restorer. Mr. SaVille warrants upon trial that the Delaware Bitters will be pronounced the best tonic in the world. With such recommendations it will earn its way into the favor of American people, on its merits alone. These are prepared exclusively by Mr. SaVille, and all are labeled with cut of his building upon them”. 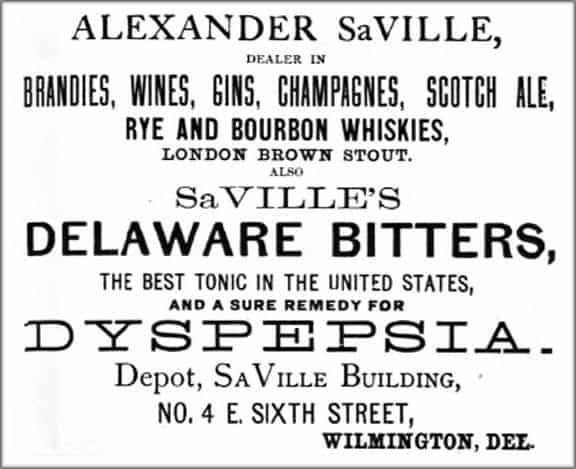 Wilmington is the largest city in the state of Delaware, United States, and is located at the confluence of the Christina River and Brandywine Creek, near where the Christina flows into the Delaware River. It is the county seat of New Castle County and one of the major cities in the Delaware Valley metropolitan area. Wilmington was named by Proprietor Thomas Penn after his friend Spencer Compton, Earl of Wilmington, who was prime minister in the reign of George II of Great Britain. Read more… 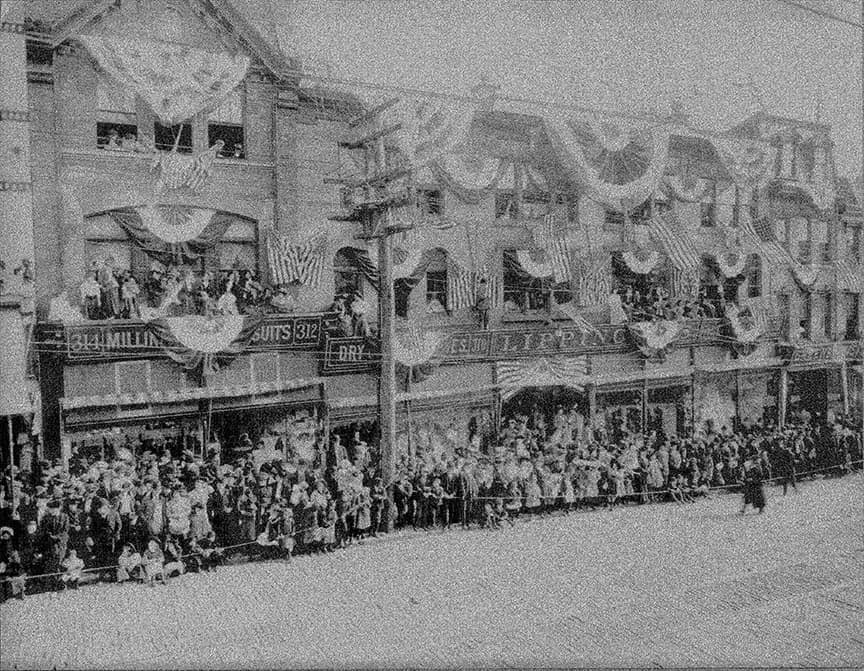 300 Block of Market Street during a Homecoming Parade, 1912 (Courtesy of Delaware Historical Society)

Ferdinand Meyer V is a native of Baltimore, Maryland and has a BFA in Fine Art and Graphic Design from the Kansas City Art Institute and School of Design. Ferdinand is the founding Principal of FMG Design, a nationally recognized design consultation firm. Ferdinand is a passionate collector of American historical glass specializing in bitters bottles, color runs and related classic figural bottles. He is married to Elizabeth Jane Meyer and lives in Houston, Texas with their daughter and three wonderful grandchildren. The Meyers are also very involved in Quarter Horses, antiques and early United States postage stamps. Ferdinand is the past 6-year President of the Federation of Historical Bottle Collectors and is one of the founding members of the FOHBC Virtual Museum.
View all posts by Ferdinand Meyer V →
This entry was posted in Advertising, Bitters, History, Liquor Merchant, Medicines & Cures, Spirits, Tonics and tagged Alexander, bitters, Delaware, liquor, SaVille, Tonic, Wilmington, Wine. Bookmark the permalink.