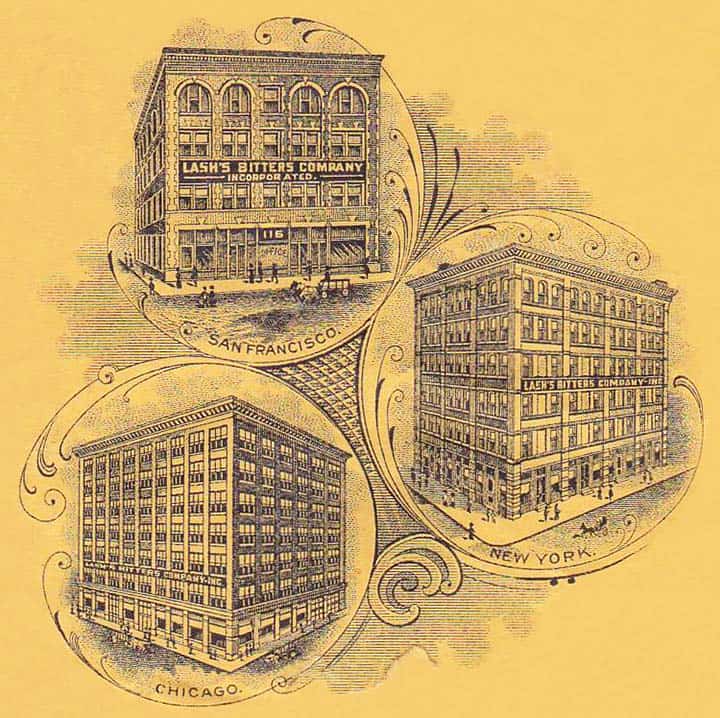 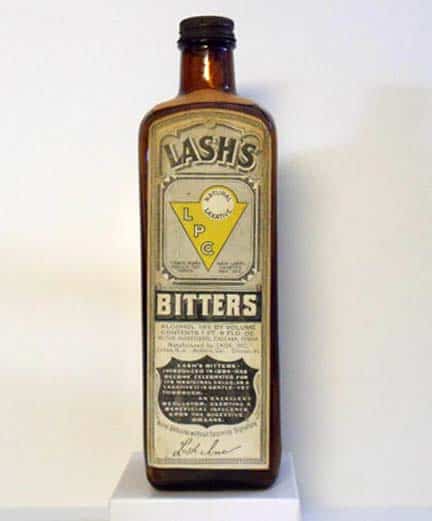 Yesterday I posted Part ONE of this series dealing with the various Lash’s bitters bottles and today we will focus on Lash’s history and a group of business ephemera from Bitters Bottles and the Joe Gourd Collection. As noted previously, Joe has well in excess of 100 advertising piece’s for the Lash’s Bitters brand. Most of those pieces will follow. 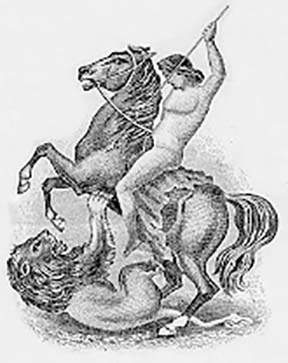 I suppose this title above could say “Lash’s Bitters – Cincinnati, Sacramento, San Francisco, Chicago, New York and Anaheim” because this brand really had legs and endurance as you will see. We say San Francisco, Chicago and New York as those were the three cities that Lash’s ran major operations out of. The illustration at the top of the post pictures the large and prominent buildings that anchored the Lash’s brand from coast to coast.

The story of Lash’s starts with John Joseph Spieker.

John Joseph Spieker or J. J. Spieker in most historical documents, was born on 26 February 1855 in Cincinnati, Hamilton County, Ohio. His parents were John G. Spieker and Marie Theresa Niehoff. Both were from Germany though some records say the father was born in Ohio and his mother in New York. John Joseph moved to Sacramento, California in 1875 and was married in San Francisco in 1879 to Cornelia Ackley, who was also from Sacramento. She would later run the business after his death. 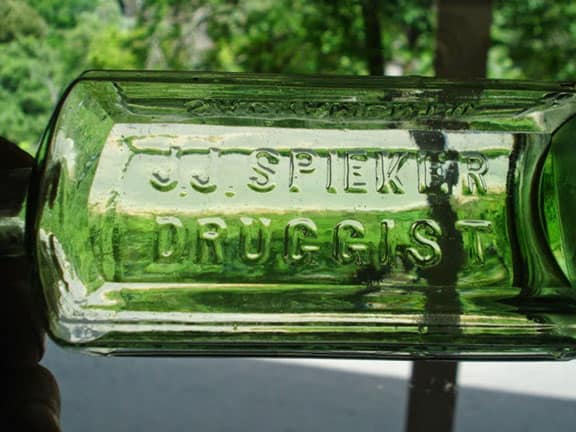 In 1876, at the early age of 20 or so, J. J. Spieker became a druggist in Sacramento and by 1878 he was a partner in Tufts & Spieker (A. C. Tufts and J. J. Spieker) who were druggists and apothecaries. They produced a medicine called Yerba Santa Cough Balsam. In February 1884, John Spieker formed a new partnership with Tito M. Lash, and named the company T. M. Lash & Co. More information on brand development further below. The 1880 United States Federal Census also lists Spieker as a druggist in Sacramento while a city directory at that time notes a J. J. Spieker, druggist and apothecary, on the northwest corner of 6th and K. He is living above the shop. In 1881, he moves to a house in Sacramento keeping the shop address. As late as 1900, the United States Federal Census lists him as a druggist in San Francisco.

Tito Martin Lash was born in November 1852 in Ohio and must have been childhood friends or connected in some way with John Joseph Spieker as they both went to Sacramento in 1875 or so from Ohio. Tito’s father was from England and his mother was from Ohio. His wife was Emily J. Lash.

Tito spent the rest of his life in Sacramento and was initially listed as a manufacturer of filters prior to connecting with J. J. Spieker in 1884. J. J. Spieker would buy him out in 1889 as we will see though Lash would retain the T. M. Lash & Company name for many years. This would cause legal problems between the two. From that period on, Lash was related to Dr. Web’s Medical Manufacturing Company in Sacramento and later in 1906, as the proprietor of Dr. Web’s Co-Operative Medical Company. Lash was also involved in a number of patents including devices for mechanical movement (see below), playing cards and window-sash hinges. 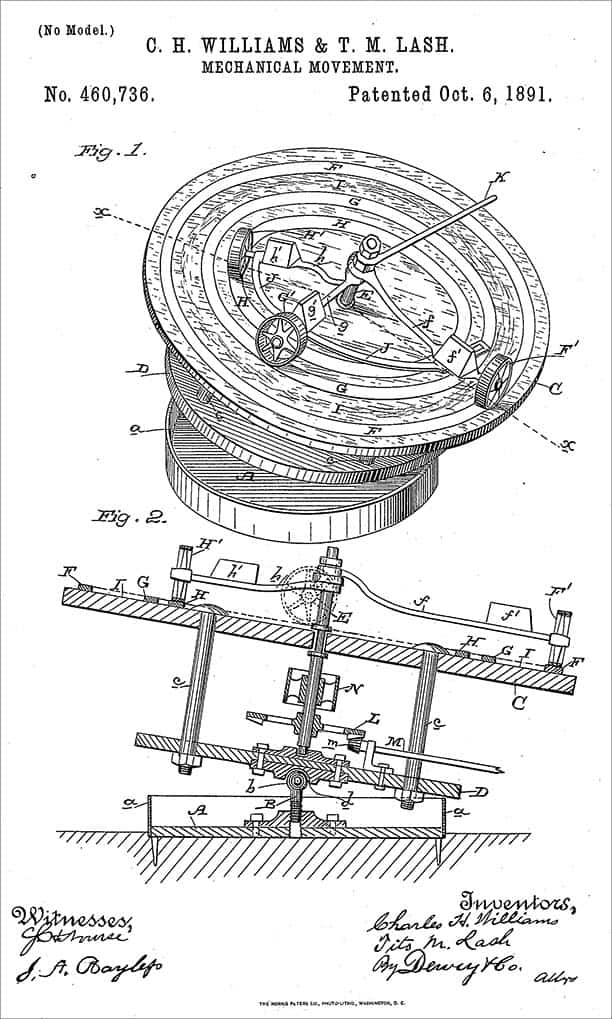 In 1911, Tito M. Lash was indicted by a grand jury for performing and illegal operation on a women who died. He must have been an interesting character, and reminds me of some I read about in present day news. Lash died on 22 April 1922 at 69 years old in Sacramento. For more on Tito M. Lash, read T. M. Lash & Co. Web’s A No. 1 Cathartic Tonic at Bottle Pickers.

From a Winter 2003 Bottles and Extras article by Donald Yates. This article was contributed by Douglas Lash, who is a member of the Lash Family hierarchy and originally appeared in: “PHARMACY IN HISTORY JOURNAL – VOL. 43 No 1, 2001.” “LASH’S BITTERS: From the Bathroom to the Bedroom”, by Benjamin C. Torbenson, Jonathon Erlen and Michael S. Torbenson.

There is relatively little historical information on Lash’s Bitters Company, in business from 1884 to 1966. They later manufactured soft drinks. After Hires, Lash’s Root Beer mugs are most commonly seen at antique bottle shows, which may be attributed to several regions of Lash’s bottling plants. 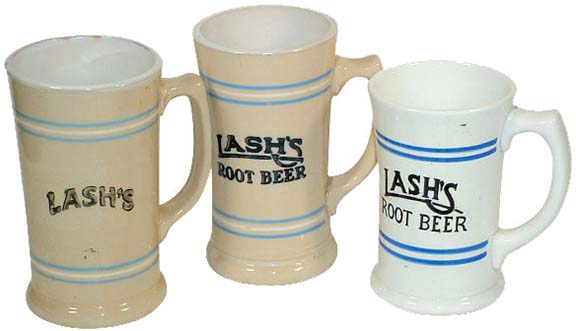 The Lash’s Bitters Co. was established by pharmacist, John Spieker. John was born in 1855 and moved Cincinnati to Sacramento in 1875. A year later, he formed a partnership with pharmacist, A. C. Tufts, to produce a medicine called Yerba Santa Cough Balsam.

John Spieker married Cornelia Ackley in 1882. John was an independent druggist for the next few years and developed patent medicines.

Tito Lash, mainly responsible for acquiring new clients, shared the duties within T. M. Lash & Co with John Spieker, who was the manager of the medical products and also the treasurer. The company was very successful and Lash’s Bitters became very popular in many regions.

Tito hired an accountant in 1889, who found questionable accounting problems in the company’s books. In October, an injunction was granted that denied Spieker from access to any accounts, money, or property, and the partnership was officially terminated.

Ten days later, Spieker bought out his former partner, and also Lash’s half of the rights to produce and market the firm’s line of products.

John Spieker then established a new company called Lash’s Bitters Co. and continued to manufacture Lash’s Bitters, and a few other medicines, including Homer’s Kidney & Liver Cure, a product he purchased from Homer Williams.

The company moved to San Francisco in 1893, and a year later, it was officially incorporated as Lash’s Bitters Co. The business was very successful and in 1901, the Chicago office was opened, and in 1904, the New York City office. Their financial situation was quite promising, and the rights to make Peruvian Bitters, another already successful product, was purchased. The new labels included: “Lash‘s Bitters Co.”

George M. Pond, the manager of Lash’s Chicago business, left and started his own bitters company and produced Pond’s Bitters for the next 15 years.

John Spieker died in 1914 at the age of 59. John’s wife, Cornelia Ackley Spieker became the new manager of Lash’s Bitters Co., with their son, Warren Spieker, as president, in the San Francisco Office.

The Lash’s Bitters Co. had a long history of bottling soft drinks and other non-alcoholic beverages, as well as their main line of patent medicines. At that time, their production changed to soft drinks. Prohibition prevented selling of liquor, so any Lash Bitters had to be sold as a medicine.

The New York operation closed in 1930, still during Prohibition. The Chicago and San Francisco offices closed in 1934 and the business offices and manufacturing were consolidated in Anaheim, where they continued production through 1943.

Lash produced beverages at their Passaic, New Jersey bottling works, which opened in 1925 and remained in production through 1966, following the death of manager, Martin O’Shea. Lash’s Bitters was a prominent medicine, claiming to cure: Biliousness, Malaria, Dyspepsia, Indigestion, Head-ache, Sour Stomach, Neuralgia, Back Pain, and all afflictions of the Kidneys and Liver.

The principal active ingredient in Lash’s Bitters was an extract from the bark of the buckthorn tree, and also contained cinnamon bark, licorice, cardamom seed, coriander seed and sugar. Lash’s Root Beer probably also had great medicinal value, as well as some similar ingredients.

The Lash Root Beer mugs were made of stoneware by the Sherwood Brothers Pottery in New Brighton, Pennsylvania. Many thanks to Douglas Lash for contributing this article on his family history. 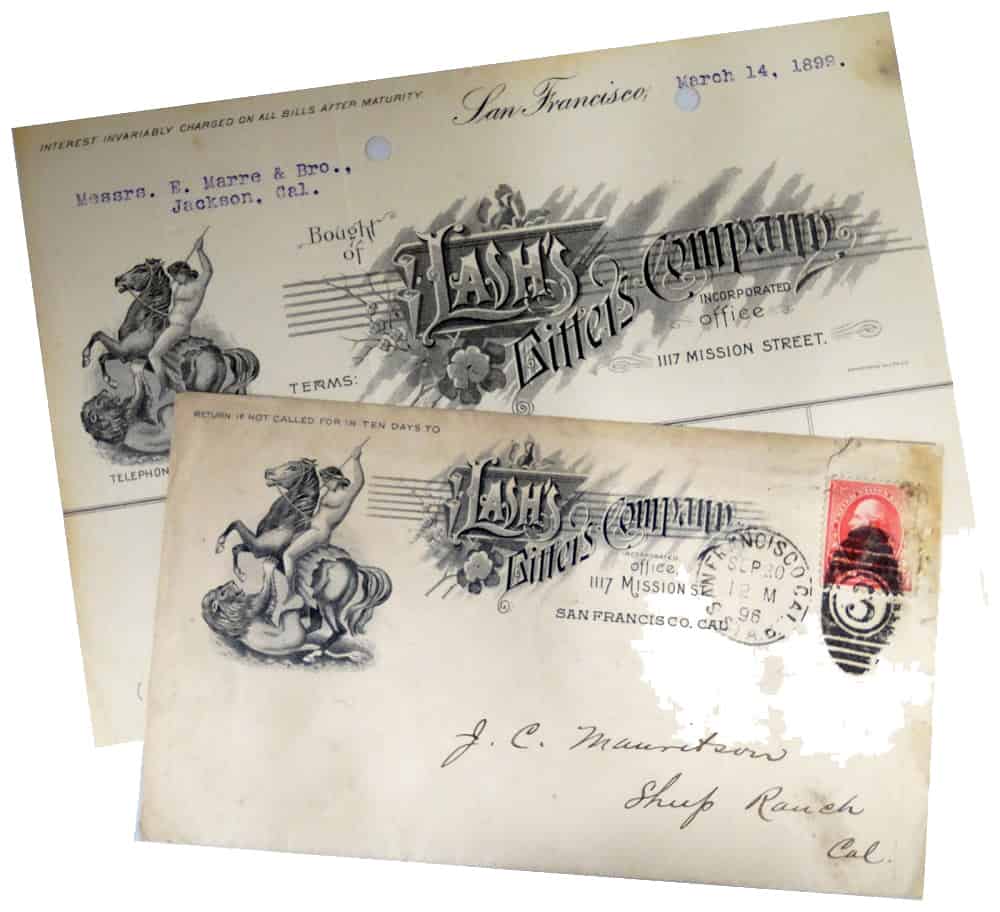 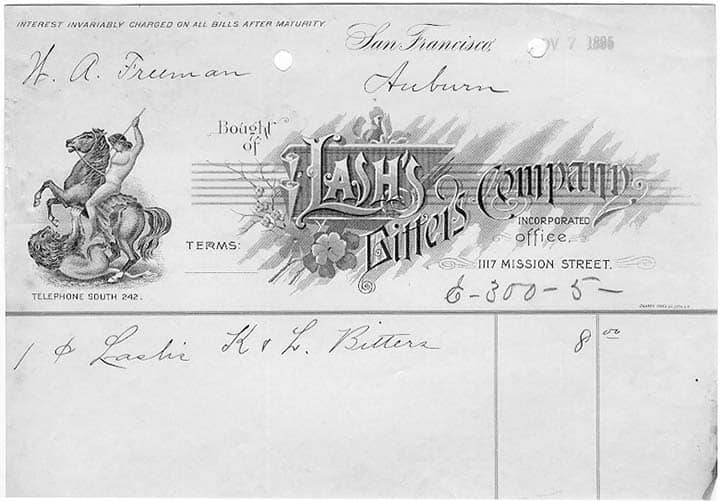 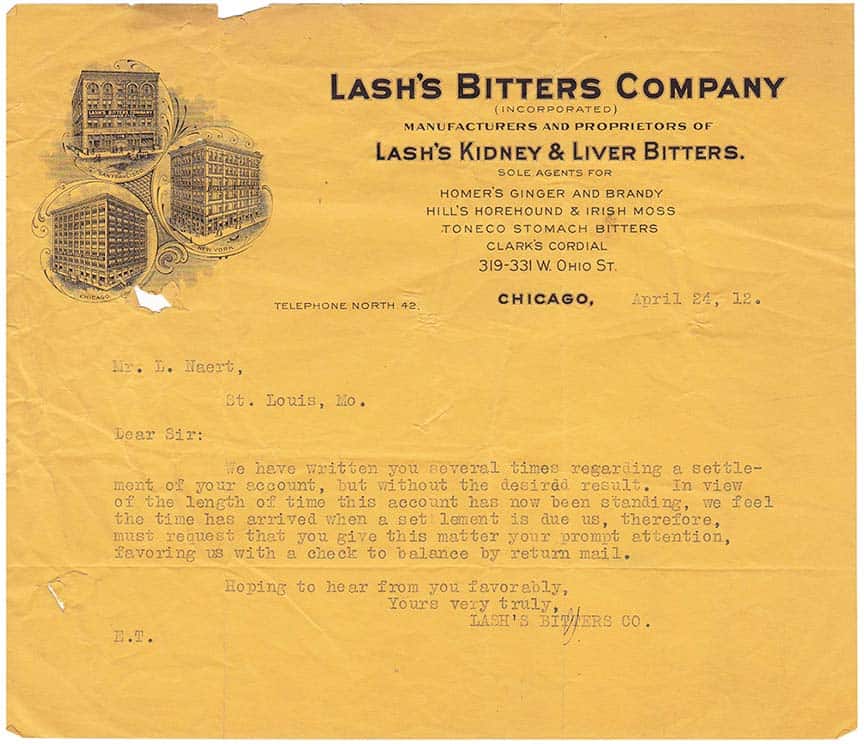 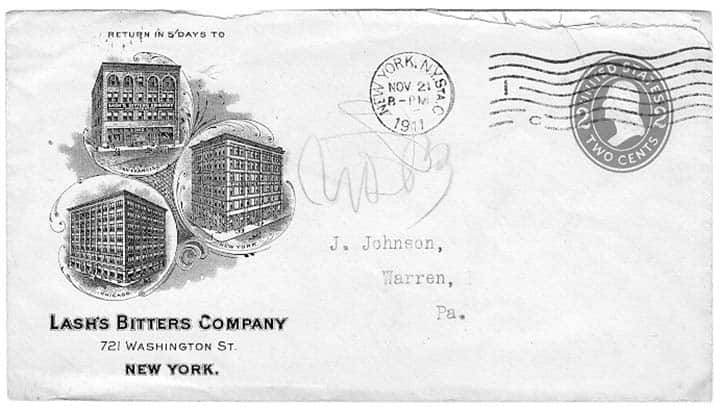 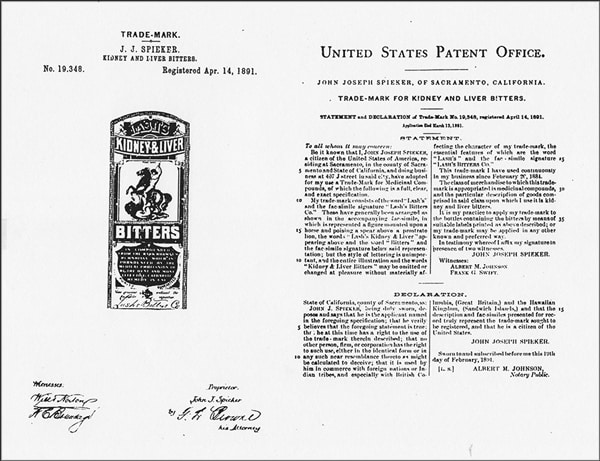 Trade-mark for Lash’s Kidney & Liver Bitters issued to John Joseph Spieker of Sacramento, California. No. 19,348. Registered April 14, 1891. Trade-mark consists of the word “Lash’s” and the facsimile signature “Lash’s Bitters Co.” These have generally been arranged to accompany a figure mounted upon a horse and poising a spear above a prostrate lion.