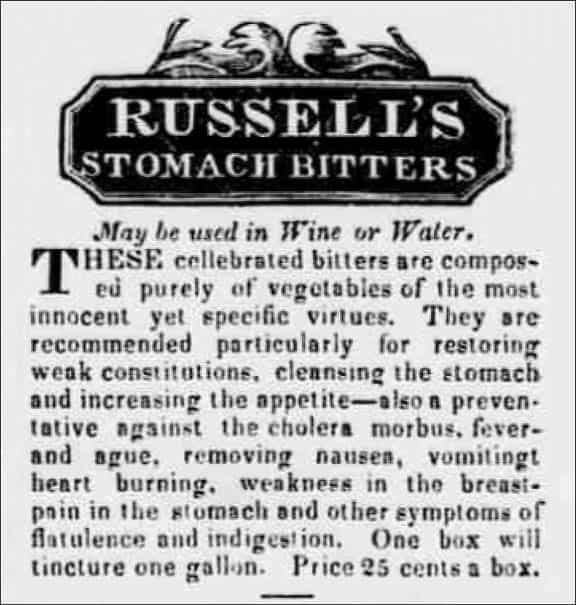 I found this Russell’s Stomach Bitters advertisement rather interesting for a number of reasons. First, it is rather old, coming from the Burlington Free Press (Vermont) in 1836. An earlier advertisement from 1827 has been reported by Ring & Ham. Second, the bitters comes in a form that “May be Used in Wine or Water”, “One box will tincture one gallon”, “Price 25 cents a box”. Third, look how they spelled, ‘cellebrated’.

Russell also made Russell’s Itch Ointment, Russell’s Vegetable Billious Pills or Family Physic (huh?) and Russell’s Cellebrated (yes, that spelling again) Salt Rheum Ointment. These products originated out of Vermont and were sold in New England and ‘generally’ by druggists throughout United States.

In Bitters Bottles by Carlyn Ring and W.C. Ham, this bitters is listed as:

R 131  RUSSELL’S STOMACH BITTERS
Box, containing dry or powdered bitters
Dr. Russell’s Stomach Bitters to be prepared in wine or water, are purely vegetable. A box will tincture a gallon of wine or water. 25 cents a box.
Columbian Centinel, August 25, 1827 Ferdinand Meyer V is a native of Baltimore, Maryland and has a BFA in Fine Art and Graphic Design from the Kansas City Art Institute and School of Design. Ferdinand is the founding Principal of FMG Design, a nationally recognized design consultation firm. Ferdinand is a passionate collector of American historical glass specializing in bitters bottles, color runs and related classic figural bottles. He is married to Elizabeth Jane Meyer and lives in Houston, Texas with their daughter and three wonderful grandchildren. The Meyers are also very involved in Quarter Horses, antiques and early United States postage stamps. Ferdinand is the past 6-year President of the Federation of Historical Bottle Collectors and is one of the founding members of the FOHBC Virtual Museum.
View all posts by Ferdinand Meyer V →
This entry was posted in Advertising, Bitters, Druggist & Drugstore, History, Medicines & Cures and tagged bitters, Burlington, free, itch, ointment, pills, Press, rheum, Russell, Russell's, Stomach, Vermont, water, Wine. Bookmark the permalink.