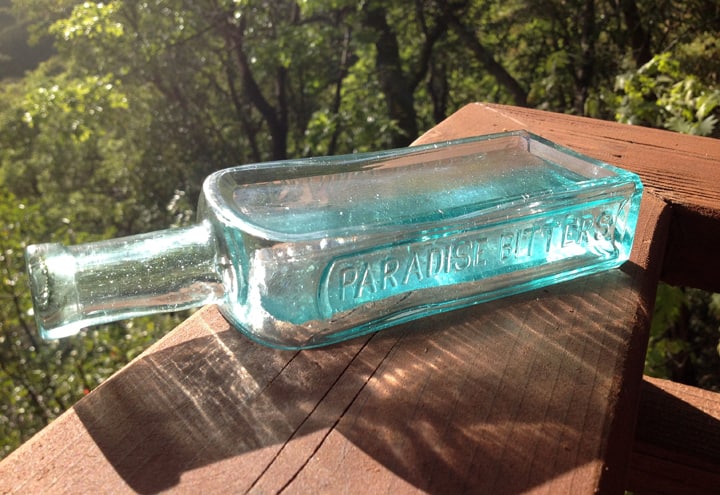 I picked up a pretty rare Paradise Bitters at the Morro Bay bottle show this past weekend when I was walking out the doors nearing the end of the two-day show. Lou Lambert had it and said the bottle was from Fresno and dug in Fresno. Possibly only three or so known examples, he added. There was no embossing except “Paradise Bitters” twice, on the side panels. 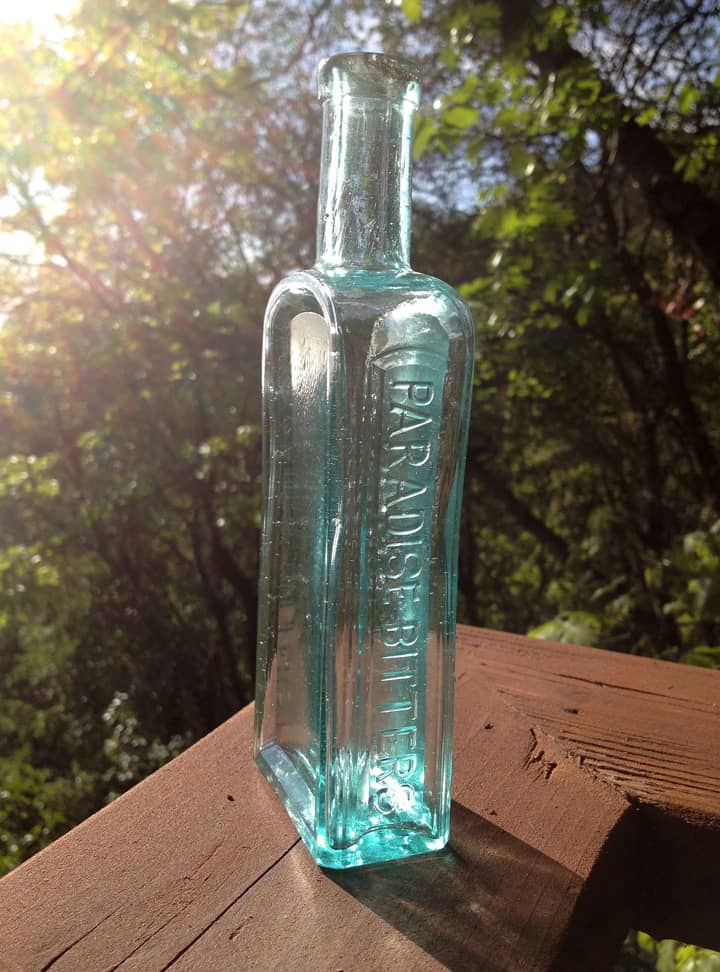 A quick search using “Paradise Bitters” and “Fresno” revealed the advertisement below that said Dr. John L. Kellett’s Paradise Oil was the “The Greatest Discovery on Earth”. Later in the advertisement, he implores you to use “Paradise Bitters” for a variety of other ailments. Priced $1 dollar a bottle, it was manufactured by Kellett & Brown in Fresno, California. All druggists can obtain the same by applying to F. W. Braun & Company in Los Angeles, California. 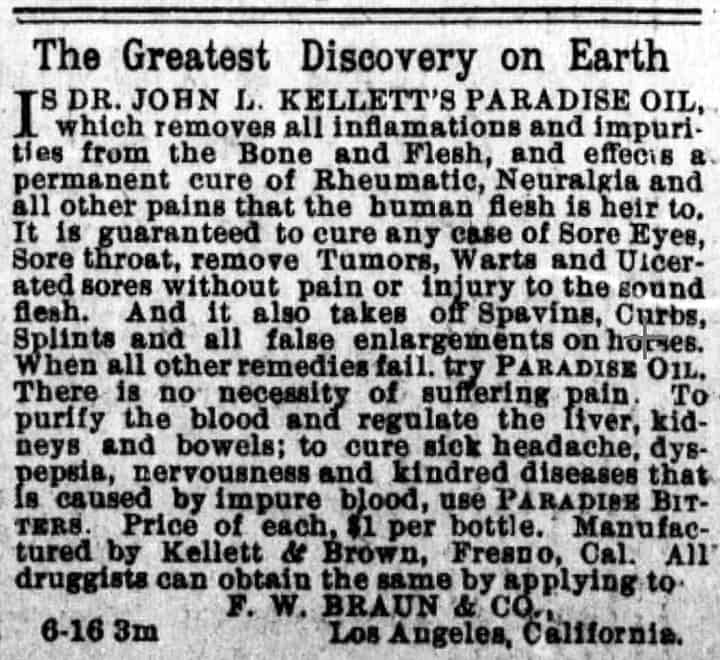 From various bits of information, I can piece together that Dr. John Kellett was born about 1805 in Ireland and once in the states, settled in Utica, New York. He came west and settled in Hornitos, Mariposa County, California as a farmer. Hornitos soon became one of the most important points in the route of travel between Stockton and Los Angeles and is northwest of Fresno. Hornitos means “little ovens” in Spanish. About a mile from town, Dr. John Kellet, in 1851, operated a quartz mill, by water-power, with a wheel forty-five feet in diameter.

He married Minerva Evilyn Lewis in 1855, who in her teens, she, with her father, sister, brother and stepmother, left Alabama for Richmond, Virginia, from there they went to Little Rock, Arkansas; from there they emigrated to California in 1852, crossing the plains in a wagon train. The had a number of children, the first being John Lewis Kellett in 1862. I believe this son put out the Paradise Bitters.

The following “incident with a runaway horse” in 1873, talks about young John. “John L. Kellett, a lad of 15 years of age, son of Dr. John Kellett, who resides near Hornitos, met with a very severe accident a few days ago, which came near proving fatal. He was in the act of unhitching a horse which was fastened with a chain halter, when the animal gave a sudden start and ran – the chain becoming entangled and forming a noose around the boy’s wrist. The boy fell and was dragged at full speed for about 400 yards, receiving some very serious and painful bruises, including 5 severe cuts on the head. When picked up nearly every stitch of clothing was torn from his body and he was insensible. His escape from death seems almost a miracle. At last accounts he was recovering with a prospect of sustaining no permanent injury from his wounds.”

In 1882, John C. Kellett was advertising Liniments and in 1891, John L. Kellett was advertising the Paradise Bitters and Paradise Oil. Did they work together? Did they compete? In 1902, The California C0-operative Medical Company was organized in Eureka, California and was formed by John L. Kellett. One share entitled the owner to “free medical service and treatment for themselves and little ones”. At this time Kellett was operating out of Oakland.

1851: Hornitos soon became one of the most important points in the route of travel between Stockton and Los Angeles. About a mile from town, Dr. John Kellett, in 1851, operated a quartz mill, by water-power, with a wheel forty-five feet in diameter. 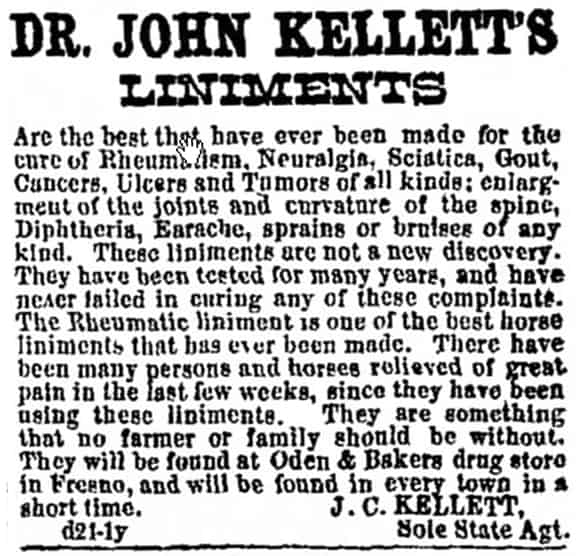 The deceased was the beloved wife of Dr. John KELLETT, of Hornitos. She was born in Mobile, Alabama, on Oct. 12th, 1839, and was the youngest child of David L. LEWIS, by his wife Susanna LEGARE, daughter of Hugh LEGARE, of North Carolina, whom he married at Georgia in 1829. While the subject of this sketch was yet early in her teens, she, with her father, sister, brother and stepmother, left Alabama for Richmond, Va., from there they went to Little Rock, Arkansas; from thence they emigrated to California in 1852, crossing the plains in the same train, with R. H. WARD, of Merced, STONER and family at Stockton. The LEWIS family met John KELLETT of Hornitos, then of Utica, New York, who the deceased married in 1855 since which time she has devoted her life to the cares of her family and the careful rearing of her children, who are now left to mourn the loss of a faithful devoted wife, a patient and gentle mother.

1887: January 22, 1887 Mariposa Gazette, KELLETT- HALLIHAN marriage January 12, 1889 Mariposa Gazette from Coulterville Correspondence, Miss Lizzie HALLIHAN, one of our fair young Coulterville girls, and John KELLETT, of Hornitos, were united in the holy bonds of matrimony by Father RAGO, at the residence of the bride’s father, on Sunday, December 30th. The happy couple departed for their home near Hornitos on Monday. 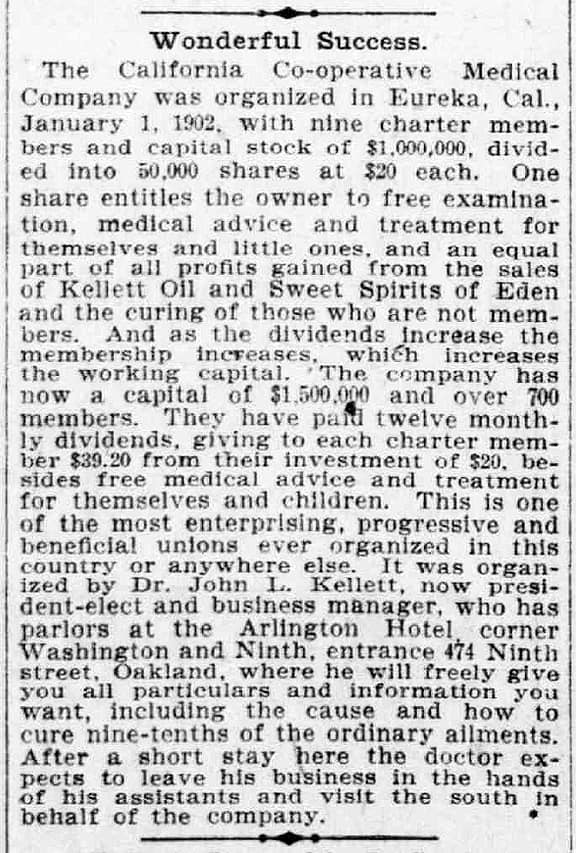 Ferdinand Meyer V is a native of Baltimore, Maryland and has a BFA in Fine Art and Graphic Design from the Kansas City Art Institute and School of Design. Ferdinand is the founding Principal of FMG Design, a nationally recognized design consultation firm. Ferdinand is a passionate collector of American historical glass specializing in bitters bottles, color runs and related classic figural bottles. He is married to Elizabeth Jane Meyer and lives in Houston, Texas with their daughter and three wonderful grandchildren. The Meyers are also very involved in Quarter Horses, antiques and early United States postage stamps. Ferdinand is the past 6-year President of the Federation of Historical Bottle Collectors and is one of the founding members of the FOHBC Virtual Museum.
View all posts by Ferdinand Meyer V →
This entry was posted in Bitters, Druggist & Drugstore, History, Medicines & Cures and tagged bay, bitters, Braun, brown, california, Fresno, Kellett, Lambert, Lewis, Morro, oil, Paradise, Utica. Bookmark the permalink.