Black Hills Bitters To The Front! 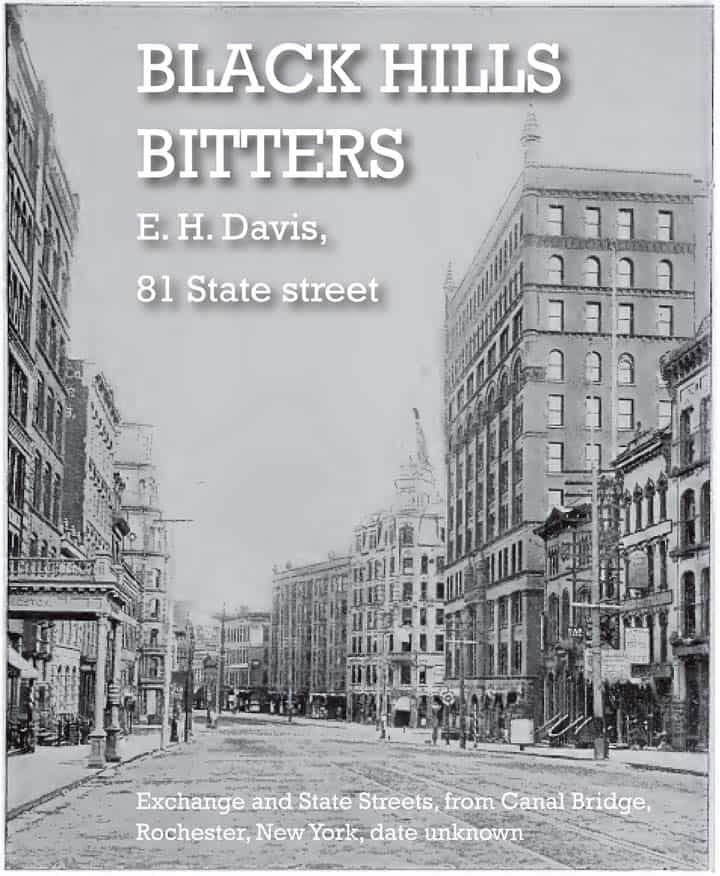 Black Hills Bitters To The Front!

Jack Stecher (Rochester, New York) provided me with a copy of this 1879 advertisement below for Black Hills Bitters from Rochester, New York and asked if I knew anything about the brand or E. H. Davis? All Carlyn Ring and W.C. Ham have in Bitters Bottles is reference to the same advertisement from the Corning Democrat (Corning, N.Y.) on October 15, 1879. They gave it a B 115 listing. I am not aware of any existing bottles but I sure like their slogan, “Black Hills Bitters To The Front!”

Edward H. Davis was born in New York around 1832 and was a well known and reputable druggist in Rochester, New York. He graduated from the University of Buffalo and then worked as a physician and druggist in Spencerport, New York which is west of Rochester. He then joined the Rochester drug house that was first established by Hippolyt A. Blauw in 1852. By 1869 it was called Rowley & Davis. Some of the brands they represented included Hoyt’s Cologne, Buckingham Dye, Hall’s Hair Renewer, Hamburger Drops, Blauw’s Worm Lozenges, Blauw’s Diarrhea Mixture, Boshe’s German Cough Syrups along with other patent medicines, Havana cigars, perfumes, colognes, surgical instruments, toilet soaps, homeopathic vials, sponges and chamois, German drugs, prescriptions, oils, medicinal liquors, wines, stationery, books and notions etc. Later Edward H. Davis became the sole proprietor, and in 1883, Charles Blauw (son of the original founder of the drug house) acquired an interest, and the firm name E. H. Davis & Company was adopted.

The drug store business was only retail at first, and the wholesale department was added in 1875. The store was first located at 81 State street and then moved to 101 State street in mid 1880s. A listing in the History and Commerce of Rochester says of the drug house:

The premises here occupied by the firm comprise a spacious floor and basement and a commodious four-story and basement building in the rear, used as a warehouse. The various departments are well ordered and thoroughly equipped, and a dozen or more people are employed in the establishment, while two salesmen represent the house on the road, the trade extending throughout Western New York and Northern Pennsylvania.

There was a well-equipped laboratory on the premises, and a number of meritorious pharmaceutical specialties were manufactured by the drug firm. Again from History and Commerce of Rochester: 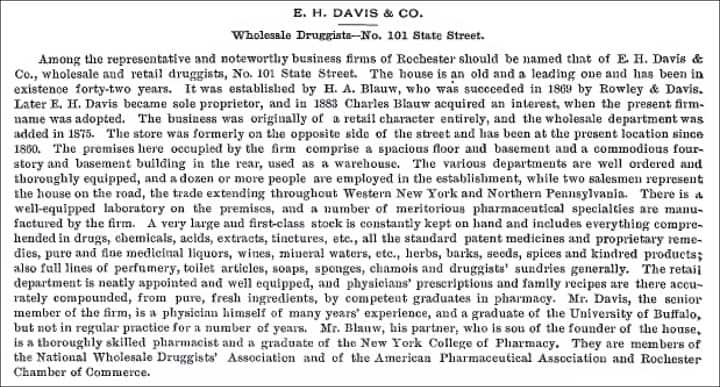 The Blauw collection consists of four ledgers and two formularies. Ledger 1 (Sept. 1851-July-1857) is a chronologically arranged record of chemicals, botanicals and preparations sold to druggists in New York, Boston, Philadelphia, Buffalo, Rochester and other cities. Ledger 2 records prescriptions Blauw filled (numbered 11000-14500) between March & Nov. 1855. Ledger 3 records prescriptions filled (nos. 51000-55000) between May & Nov. 1863. Ledger 4 records prescriptions filled (nos. 88200-97010) between Oct. 1867 & Mar. 1868. Ledger 5 bears the label of C. Blauw & Co., and records prescriptions filled in June 1883 at Charles Blauw’s short-lived drug store on State St., opened after his return from New York City in 1882. Formulary 1 contains recipes for medicines prepared by H.A. Blauw. Formularly 2 (which may be dated 1872-1884) bears the inscription of Charles Glaser, a “clerk” at at least two Rochester pharmacies who boarded with Ernestine Blauw, and who may have worked for H.A. Blauw and Charles Blauw. 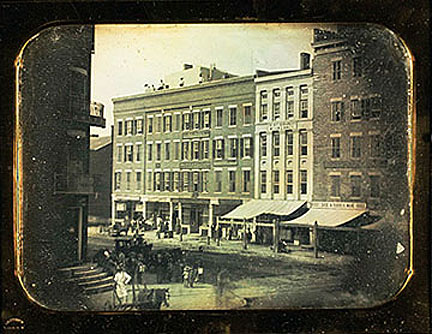 The corner of State and Main streets in downtown Rochester, N.Y., is a hub of activity in this daguerreotype taken around 1852. – University of Rochester archives

Ferdinand Meyer V is a native of Baltimore, Maryland and has a BFA in Fine Art and Graphic Design from the Kansas City Art Institute and School of Design. Ferdinand is the founding Principal of FMG Design, a nationally recognized design consultation firm. Ferdinand is a passionate collector of American historical glass specializing in bitters bottles, color runs and related classic figural bottles. He is married to Elizabeth Jane Meyer and lives in Houston, Texas with their daughter and three wonderful grandchildren. The Meyers are also very involved in Quarter Horses, antiques and early United States postage stamps. Ferdinand is the past 6-year President of the Federation of Historical Bottle Collectors and is one of the founding members of the FOHBC Virtual Museum.
View all posts by Ferdinand Meyer V →
This entry was posted in Advertising, Bitters, Druggist & Drugstore, History, Medicines & Cures, Questions, Remedy and tagged bitters, Black, Blauw, Charles, Davis, drug, Druggist & Drugstore, Edward, German, Hills, Hippolyt, New York, physician, Remedy, Rochester, Rowley, Stecher, Street. Bookmark the permalink.