Beneath Lincoln’s ass they used to load a lot of glass.

Unknown to most Washingtonians and other Americans, and particularity we few in the glass collecting community, located literally right underneath the Lincoln Memorial, was a thriving glass works started in 1807. It rivaled the Boston Crown glass works in size and output at the time and supplied a lot of the glass windows in the city of Washington. The name, “Old Glass House,” to an old-time Washingtonian, meant not only an old factory where glass was made, but it also comprehended the settlement that grew up in the vicinity of that factory.

This factory and settlement were located in the southwestern part of Washington City. To be more explicit, the factory was at the southeast corner of Twenty-second and Water streets, northwest. The Glass-House settlement covered the space between Twenty-first and Twenty-third streets northwest, and New York avenue and the Potomac river, and occupied part of the old village of Hamburg or Funkstown, which extended from about the location of Nineteenth street to that of Twenty-third street, west, and from about the location of H street, northwest, to the Potomac River. In easier terms to understand, just north of the current location of the Lincoln Memorial monument.

Below is a map from 1800 showing the area where the glass works were located. Notice how much ground was added at the current site of the Lincoln Memorial.

This is a map from 1800. The glass house are is marked in red. The yellow area is the wharf which extended outward into the Potomac, and to the right of this area is the future site of the Washington Memorial.

Drawing looking west towards Arlington Virginia. Arlington, Virginia is in the background. In present day, you are viewing the glass works from the Washington Mall. Just to the left of the schooner is where the Lincoln Memorial would be located. – From the records of the Columbia Historical Society.

The factory buildings extended quite a distance along Water street. At the east end was the blowing room, a barn-like brick structure with broad blind arches in the walls. There was no chimney to the blowing-room, but a large cupola in the roof served as an outlet for the smoke and gases; and a small hand-engine was always standing ready to extinguish any blaze in the roof from stray sparks. In the blowing-room were the furnaces for melting the materials, and there were platforms for ten blowers. To the west, from the blowing-room, extended the flattening-house, the cutting-room, the pot-room, the mixing-room, and the box-shop, all built of brick. Outside, next to the wharf, was a large wood-yard. Boschke’s map of Washington (1857) shows the ground plan of the works. Window glass was only produced for over thirty years with the last 10 being tenuous as we will see. 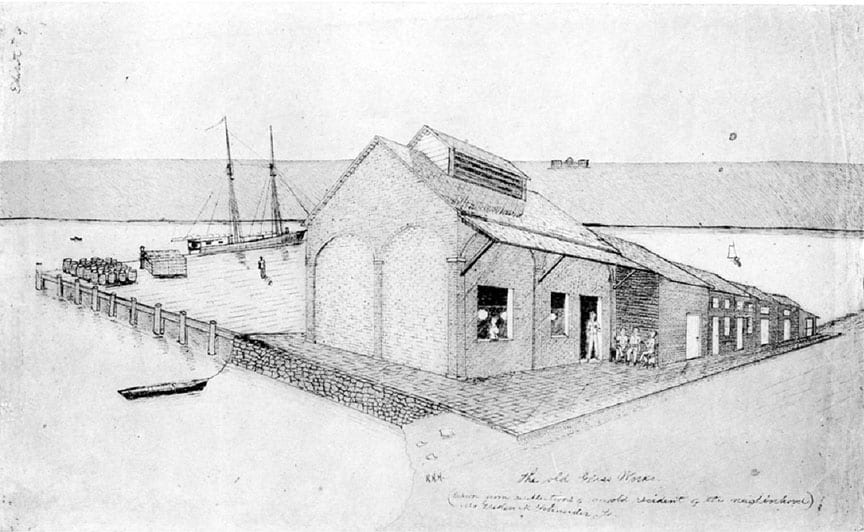 1835 drawing of the Washington City Glass Works looking towards the Potomac River. Notice the small buildings on the hill in Arlington, Virginia to the right of the main roof. This is the Robert E. Lee Mansion in Arlington Cemetery today. In 1810 this was the Custis Mansion from George Washington’s wife Martha’s family. – From the records of the Columbia Historical Society.

The settlement was principally the natural growth around what was considered in those days a large and flourishing glass factory. Situated on the riverbank between Twenty-first and Twenty-second streets, northwest, which was started about the year 1807 by a firm composed of Andrew Way, Jr., George Way, Jacob Curts, Horace H. Edwards and the practical glass maker and superintendent of the works, Solomon Stanger, (a member of the famous Stanger glass making family) who in that year (according to deed dated May 12, 1807, and recorded in Liber M 17 at folio 315 of the District of Columbia Land Records) bought a piece of land in Square 89, fronting 1691/) feet on Water street and extending southward to the Potomac; and on the river side of which was a wharf fronting a]) out 130 feet on the river, and extending about 200 feet south from Water street, and called the ”Commissioners Wharf”‘ on the old plates, with a depth of about eight feet of water at mean tide.

By the year 1809, Andrew and George Way had bought out the interests of the other owners, and in 1813 they had increased their acquisitions to the east and west of the works until their property extended 3211/2 feet along Water street, a large part of it covered by water, it is true, but very valuable to them for the extension of their works and wharves.

The following advertisements were placed in newspapers around the country: 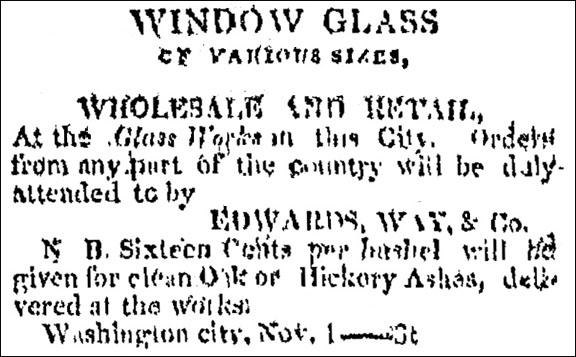 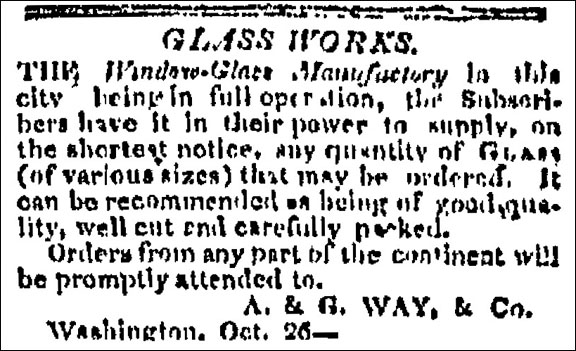 1810 advertisement for GLASS WORKS. The company is now in full possession of the Way family. 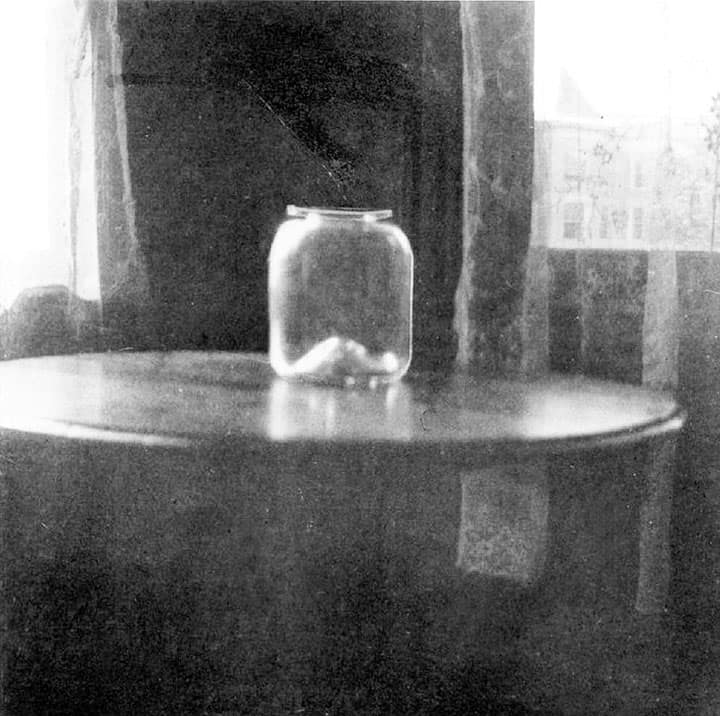 Jar manufactured at the ‘Old Glass House’ that was made for the Schneider Family in 1825. – From the records of the Columbia Historical Society.

Pieces of Glass from the Glass Works site

The following pieces of glass were found on the shore of the Potomac river just south of the glass works site. I acquired these pieces from a gentleman who lives in Georgetown who found them as a boy around 1925. The one piece is a large hunk of slag that is bright aqua in color. The other is more green in color and is clearly a window glass piece in which diamond score cutting marks are clearly seen. 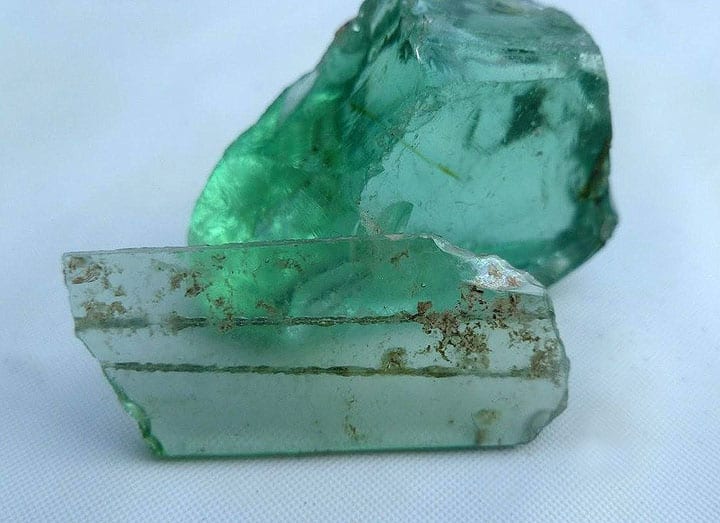 Pieces of glass found on the shore of the Potomac river just south of the Glass Works site. Notice the window glass piece in which diamond score cutting marks are clearly seen. 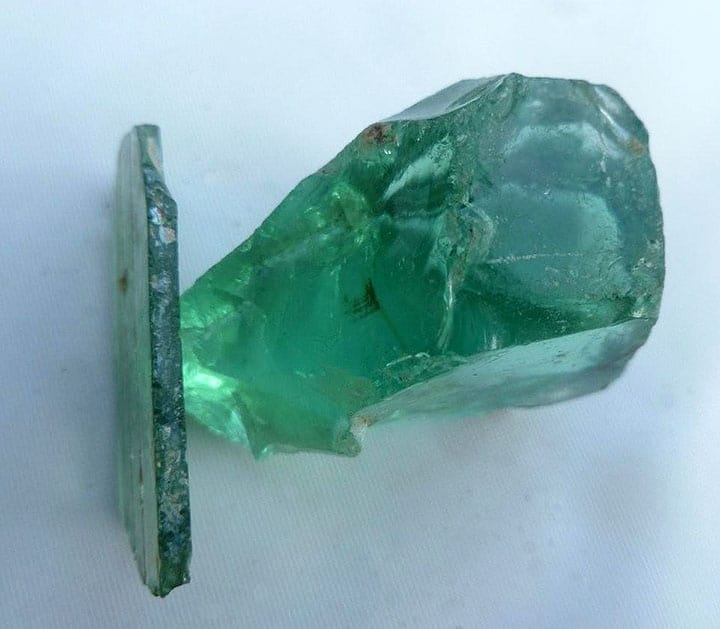 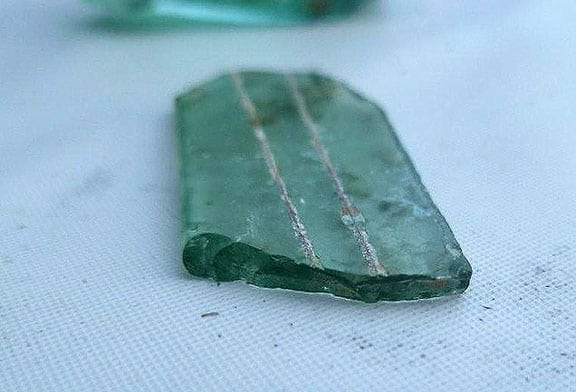 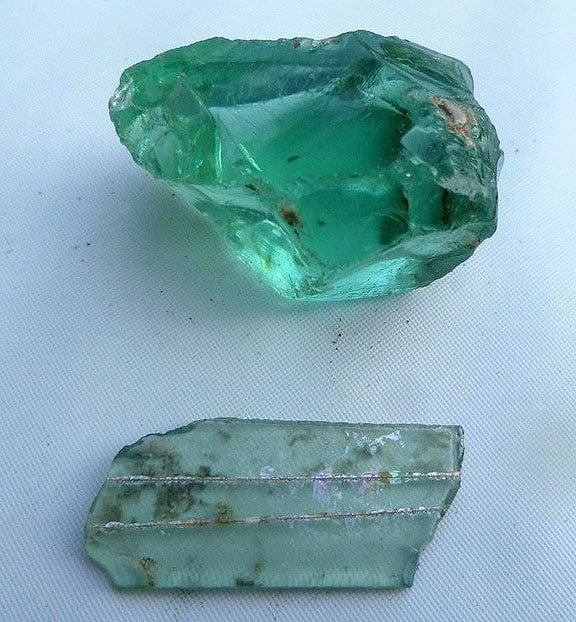 The Glass Works were advertised for sale in 1819.

Window Glass Manufactory and other valuable Property for Sale notice – 1819.

Apparently no buyers were found because Way & Company continued to own the works up until 1828 when they finally found a buyer in Cornelius McLean who would operate the works until the early spring of 1831 when he was forced to lose the works at auction. The following advertisement was placed in various newspapers around the country. 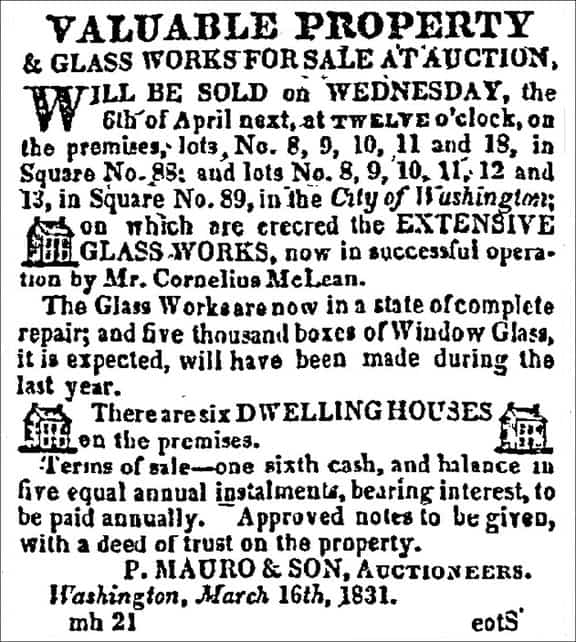 No buyers were found in 1831 or the following three years as the works were dormant. A buyer was eventually found and the Glass Works changed hands again as Lewis Johnson and Company bought the factory in 1835. Lewis was related to the Governor Johnson who owned the Glass Factory in Frederick Maryland 1n 1800. Lewis Johnson would maintain the ownership right up until 1838 as evidenced by the advertisement placed below by Francis Stenger (Stinger in ad).

FOR RENT notice by Francis Stenger.

The works would continue on and off until 1851 when they finally closed.The works began in 1807 and lasted until 1851. There were some time periods where the the works were idle. A best guess was the works operated for about 37 years.

Below is a picture of a man Fredrick Schneider who lived near and worked at the glass factory for a few years making iron Blow pipe rods and any other needed metal products. He was very helpful to the Columbia Historical Society in gathering these records.It is not to often we can look into the eyes of someone who was part of such an early glass works. 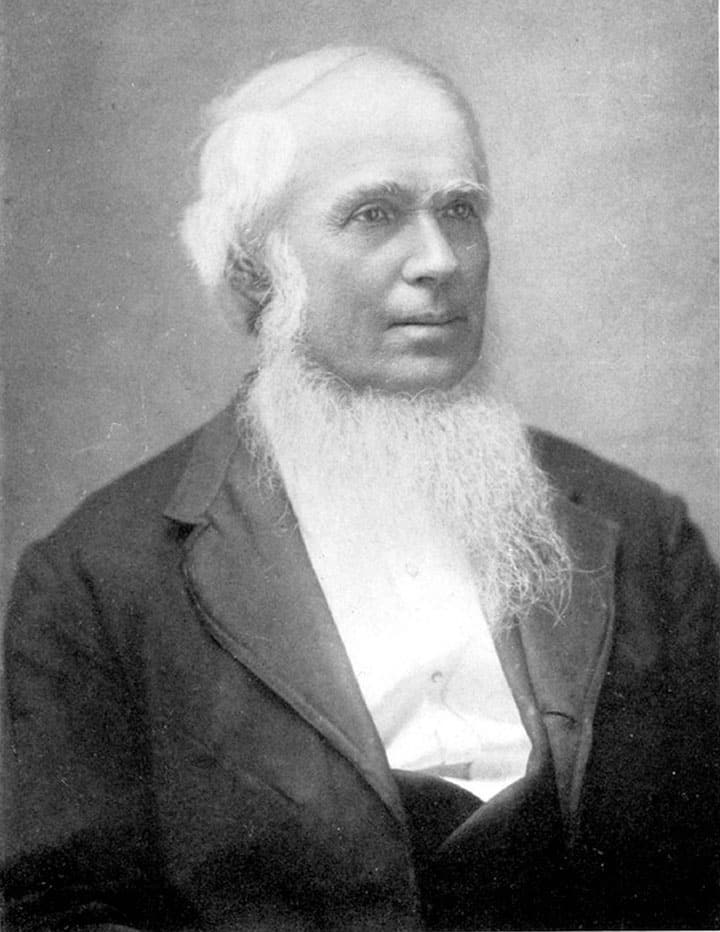 Fredrick Schneider Sr. who lived near and worked at the glass factory. Born 1811 at Lauffen Am Neckar, Wurttemburg. Died 1893 at Washington, D. C.

1 Response to Beneath Lincoln’s ass they used to load a lot of glass.