“Joe Zarro gave this to my Son” & “I Collect ’em Because They’re Pretty!” 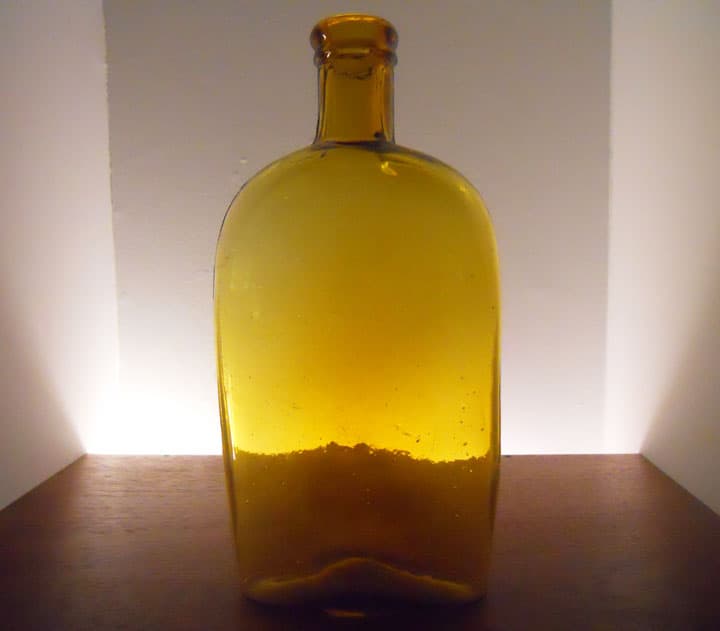 “Joe Zarro gave this to my Son”

Since some of Joe Zarro’s strap flasks have made it to Peachridge Glass, I felt it was a good time to relay a story about when Joe and I met. It was several years ago when we were introduced at the Shupp’s Grove show in Pennsylvania. After talking about (what else?) bottles for a few minutes, I mentioned that my young son usually accompanied me to most bottle shows but could not be there this time. And when I mentioned that Mikey also had an interest in collecting bottles Joe reached into a box, pulled out this flask and said “tell him Uncle Joe wanted him to have this.”

A thoughtful gesture which made for a fond memory that I will not forget.

“I Collect ’em Because They’re Pretty!”

Since strap flasks have now made it to Peachridge Glass I thought this would be a good time to share a photograph of some inexpensive bottles that look like a million bucks. I found the orange flask on the right in the ruins of an old mill behind the farm where I grew up.

Ferdinand Meyer V is a native of Baltimore, Maryland and has a BFA in Fine Art and Graphic Design from the Kansas City Art Institute and School of Design. Ferdinand is the founding Principal of FMG Design, a nationally recognized design consultation firm. Ferdinand is a passionate collector of American historical glass specializing in bitters bottles, color runs and related classic figural bottles. He is married to Elizabeth Jane Meyer and lives in Houston, Texas with their daughter and three wonderful grandchildren. The Meyers are also very involved in Quarter Horses, antiques and early United States postage stamps. Ferdinand is the past 6-year President of the Federation of Historical Bottle Collectors and is one of the founding members of the FOHBC Virtual Museum.
View all posts by Ferdinand Meyer V →
This entry was posted in Advice, Collectors & Collections, Color Runs, Flasks and tagged Ainsworth, Flask, Gene, Joe, sided, strap, Zarro. Bookmark the permalink.