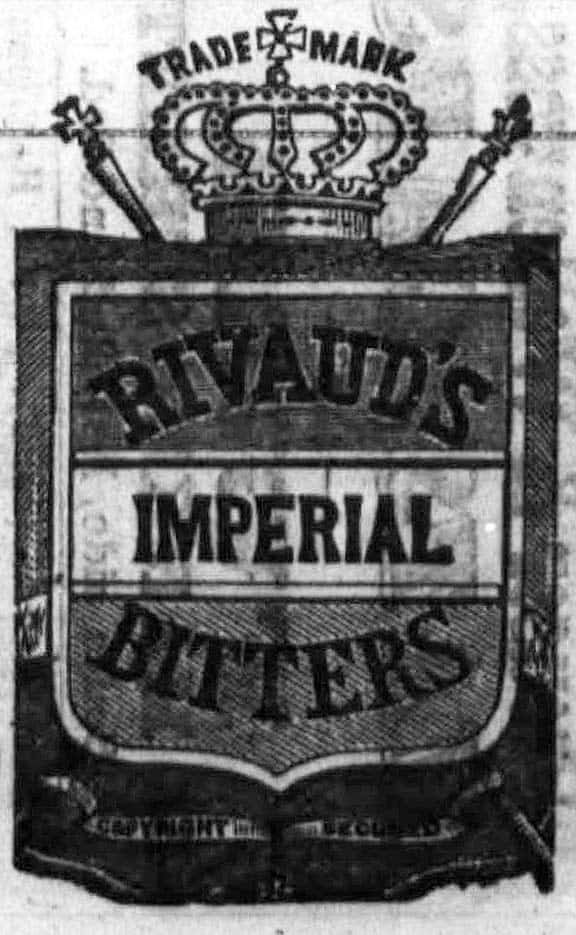 While looking around some Louisville archives for the Walker’s Tonic Bitters, I came across the above art in an 1870 directory for Rivaud’s Imperial Bitters. This rang a distant bell. Six or so years go, an ultra rare example showed up for sale. The bottle pictures in this post have been cleaned up and represent possibly the only known example of the bottle I mention. The listing in 2007 read:

This rare, possibly unique bitters has been in the collection of and found by an older long time friend that was one of our original New Orleans Antique Bottle Club founders. She has decided to sell her collection since her husband’s passing a couple of years ago. 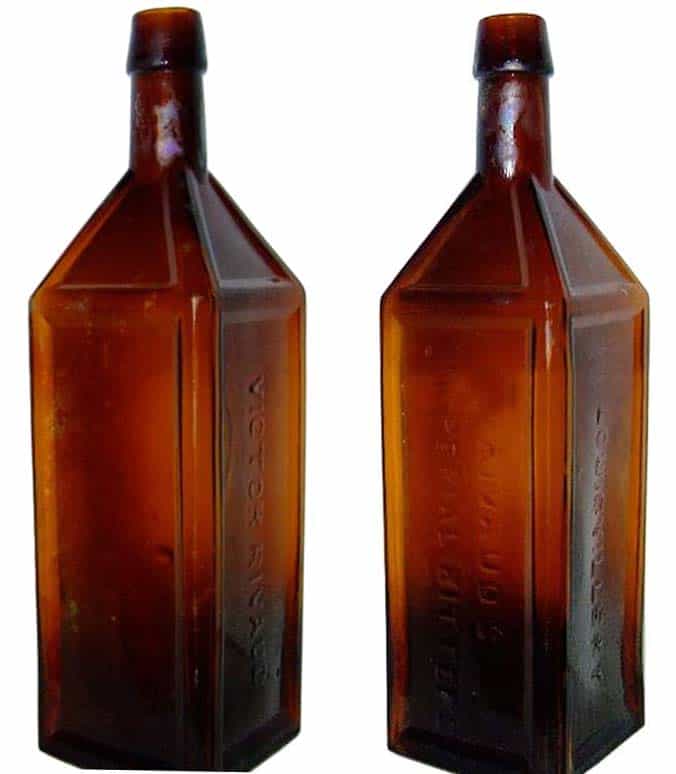 Very rare Rivaud’s Imperial Bitters as represented in a 2007 sale.

Semi cabin, medium to golden amber, 10 ½” tall x 3” square. It has a slight tapered collar lip, 4 recessed panels on the shoulder, and 4 recessed side panels, 3 embossed. It has a slight recessed smooth base. It is embossed: RIVAUD’S / IMPERIAL BITTERS (front), VICTOR RIVAUD (left panel), LOUISVILLE KY (right panel), blank back panel. It has original dug beautiful rainbow iridescence. I have included pictures of the bottle wet to show its original color. The only minor spots is a 5/16” rough edge on the rear panel edge and a 1/8” shallow tool scratch on the neck by the lip above the bitters panel. A couple of edge soil scratches and a few very light etch lines as usually found on a dug bottle, but will easily be removed with a professional cleaning. This large bottle will draw respect and be the centerpiece in any bottle collection.

Very rare Rivaud’s Imperial Bitters as represented in a 2007 sale.

Victor Rivaud was a liquor merchant from France who settled in Louisville, Kentucky. He was born in 1840 to French parents. His wife’s name was Elizabeth Clerget and they had three children. The two males, Victor L. and Louis F. Rivaud carried the torch after Victors death which occurred around 1890. He was drafted in the Civil War when he was 23 years old and worked first as a clerk in 1865. In 1866 he started on his own selling liquors, wines, tobacco and cigars both wholesale and retail. In 1870 it was Victor Rivaud & Co. This is also the year that Rivaud’s Imperial Bitters first makes an appearance. I see that it was only advertised in 1870 and 1871. 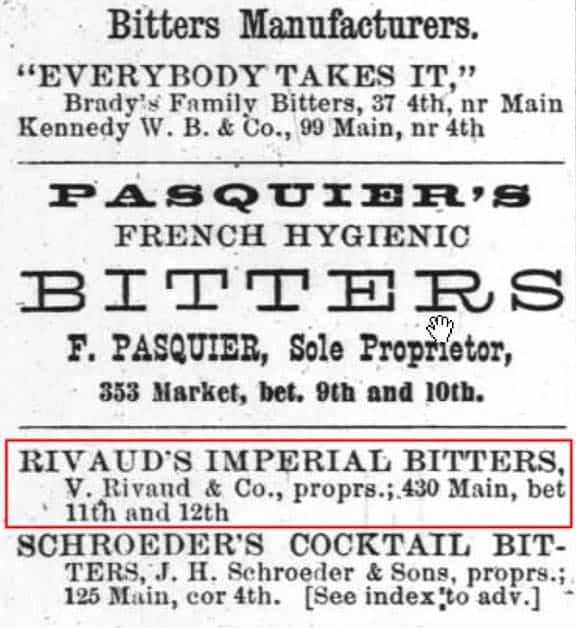 1871: Louisville Bitters Manufacturers (see above) as listed in 1he 1871 Louisville City Directory. Listing for the subject Rivaud’s Imperial Bitters

1871: German will be taught next year in all the Public School buildings of the city, which is another proof of the efficiency of our present system. Respectively submitted, Wm. H. Meffert, Victor Rivaud, W. F. Miller – Municipal Reports, order of the General Council [of the City of Louisville], 1872

Late 1890s: On the east side of Vernon Street was Pete Requet’s saloon and they had a watering trough for the horses on the street side and in front on Main Street they had platform scales to weigh wagons (of course, while being weighed and the horses watered, the drivers could get a nickel beer and a free lunch at that spa). Up on the next corner (Plum Street) was Zeigler Bakery (later Louis Rivaud grocery) and in a frame building, Ed Trigg’s barber shop (these two buildings were torn down and the late Mike Garber built a brick home on the site). – Dean Miller Walking Tour, AS I REMEMBER MADISON IN THE LATE 1890s, By Dean L. Miller

Ferdinand Meyer V is a native of Baltimore, Maryland and has a BFA in Fine Art and Graphic Design from the Kansas City Art Institute and School of Design. Ferdinand is the founding Principal of FMG Design, a nationally recognized design consultation firm. Ferdinand is a passionate collector of American historical glass specializing in bitters bottles, color runs and related classic figural bottles. He is married to Elizabeth Jane Meyer and lives in Houston, Texas with their daughter and three wonderful grandchildren. The Meyers are also very involved in Quarter Horses, antiques and early United States postage stamps. Ferdinand is the past 6-year President of the Federation of Historical Bottle Collectors and is one of the founding members of the FOHBC Virtual Museum.
View all posts by Ferdinand Meyer V →
This entry was posted in Advertising, Bitters, Civil War, Club News, Digging and Finding, History, Liquor Merchant, Spirits, Whiskey and tagged bitters, Clerget, france, Imperial, Kentucky, louis, Louisville, Rivaud, Victor. Bookmark the permalink.