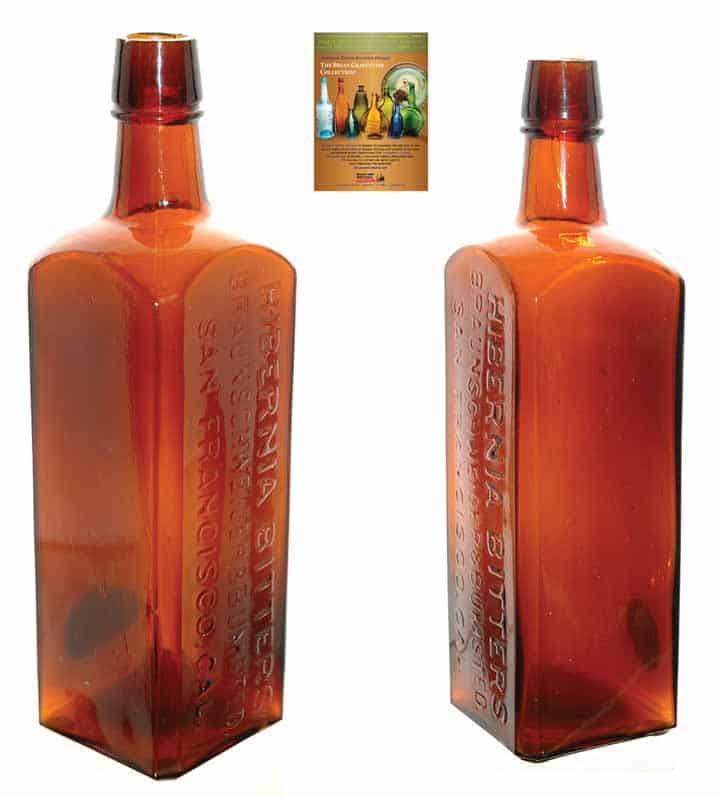 I couldn’t help but notice a really nice example of a Hibernia Bitters currently on ebay. The bitters was produced by Braunschweiger & Bumstead (should be spelled Bumsted) from San Francisco, Califiornia It brought back fond memories of when I obtained my example (pictured above) from the 3-part Bryan Grapentine auction conducted by Jeff Wichmann and American Bottle Auctions back in 2006 and 2007. See ebay listing: “Ridiculously Rare” Western Applied Top Bitters San Francisco, Cal “HIBERNIA”. The ebay bottle is pictured below. Seller: Diggin8s (100%) I thought that this might be a good time to investigate this rare ‘Western’ square and to find out who was Braunschweiger and Bumstead? Sounds like a comedy team. 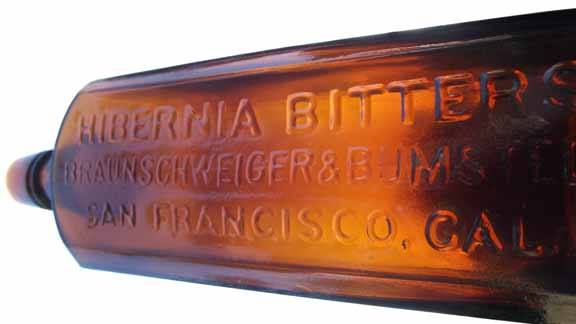 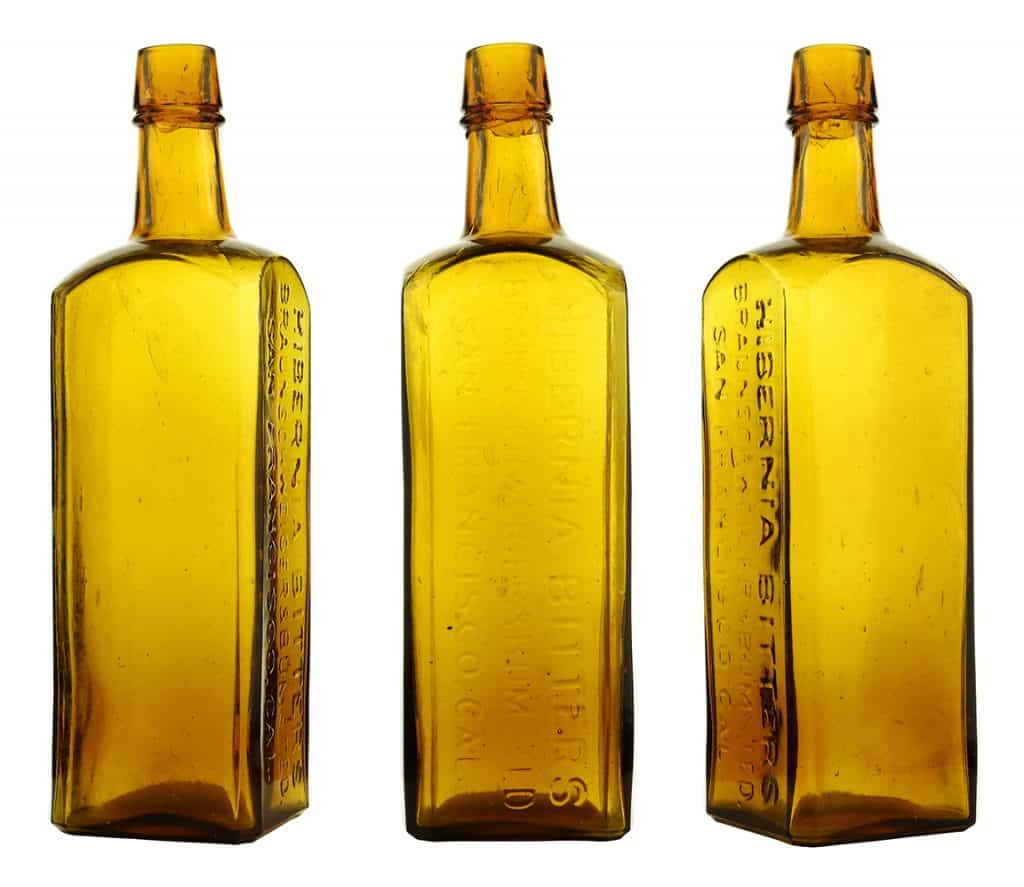 As suspected, the ‘western boys’ have already been over this topic from a couple of angles but that didn’t stop me from looking around. I’ve ‘corraled’ some of their fine work and added a little bit of my research. Of course, it is also fun to learn more about a bottle in your collection and by doing the research work yourself, it anchors the bottle a little more firmly in your memory. 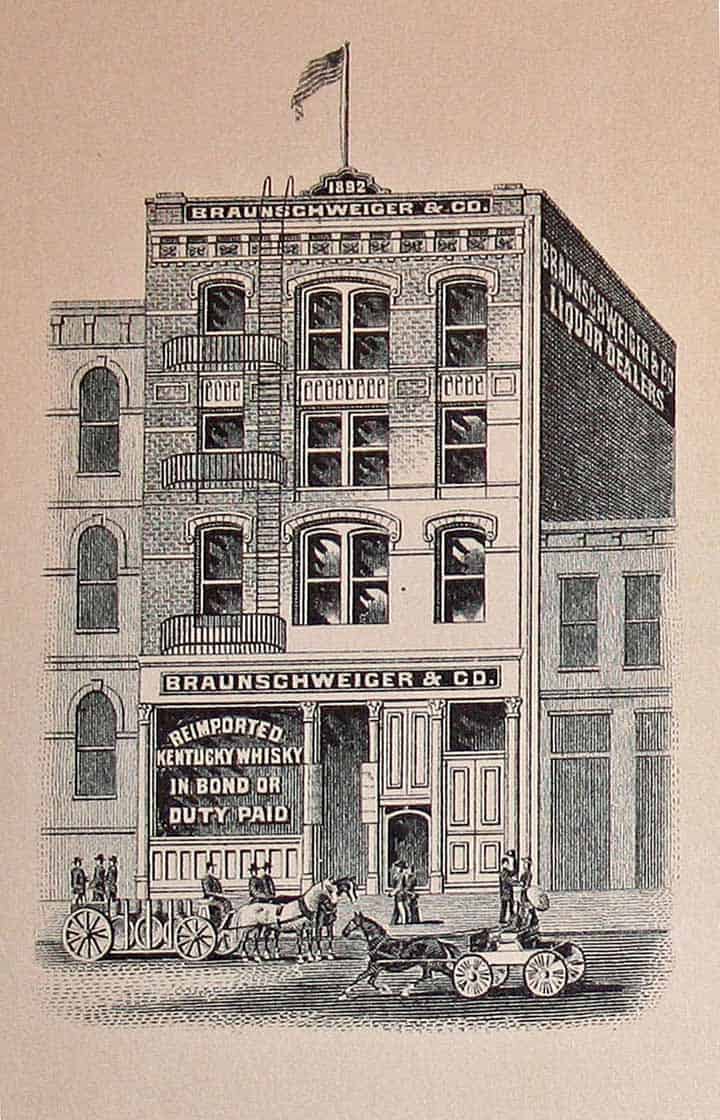 What interested me most here was the rise of Herman Braunschweiger (pictured below) and his ‘good for nuthin’ son, Herman Jr. 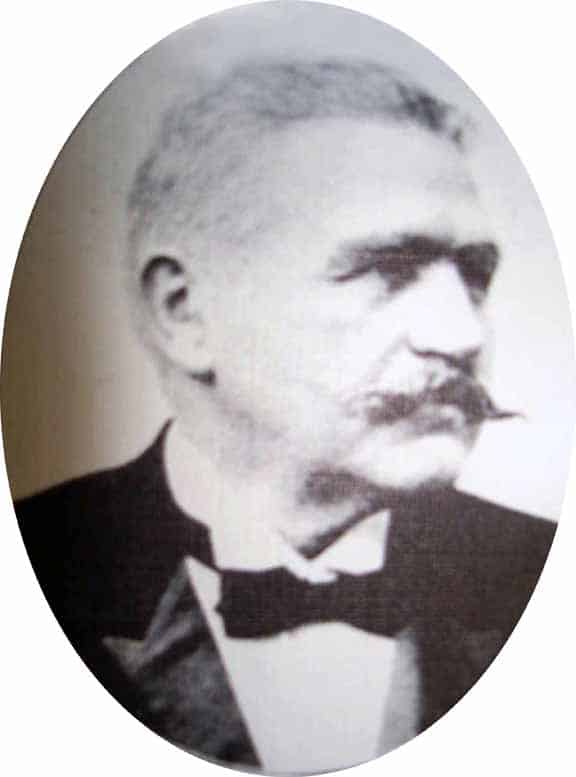 1868: Herman Braunschweiger Naturalized as Citizen of the United States in New Orleans, Louisiana on 25 May 1868. 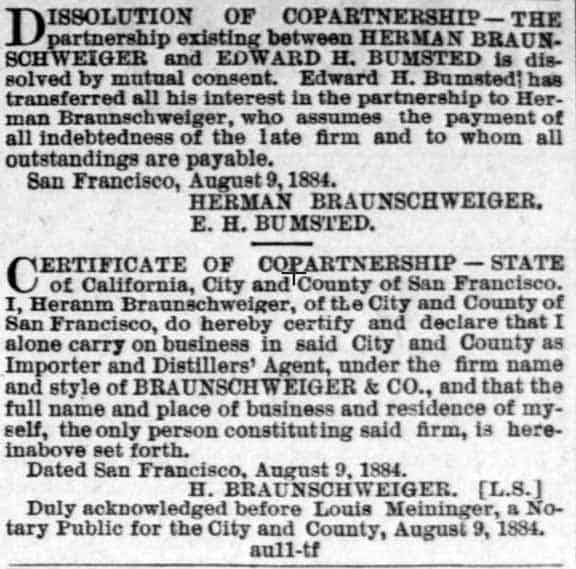 Judge Sanderson Decides That Sadie Nichols’ Husband Is Not Insane.

He Is Irrational When He Is Intoxicated, but Not a Subject for an Asylum.

The mother of the accused testified that her son is 24 years of age; has at times had an over-fondness for drink, and that she considered him weak-minded. This mental weakness, she says, is worse when he is drinking. She considers that his impaired intellect is due to an attack of heart trouble, which the young man experienced when a boy. Last May young Braunschweiger went to the Home of the Inebriates for treatment for the liquor habit, since which time he has held himself straight until last week, when he again began to drink heavily, and during his spree married Sadie Nichols.

Mrs. Braunschweiger said she feared that Herman might commit suicide, as he had said he felt very bad over the shame he had brought on his family. The father of the young man also was fearful as to his son’s life.

Braunschweiger Sr. testified that when his son was drinking he did not know what he was doing. He said that if the young man had been sober he would never have married Sadie Nichols. The witness reluctantly acknowledged that there was a taint of insanity in the family, and said he devired to have his son placed in some institution where he could be taken care of.

William Craig, an attorney, and an old friend of the family, testified that two cousins of Herman Braunschweiger Sr. had committed suicide while confined in an asylum, and that an uncle of the accused was now confined in Folsom prison, because of a forgery committed while temporarily deranged.

The accused spoke in his own behalf, saying that he had been drinking before the marriage and afterward, but that he was sober when the ceremony was performed. He claimed to be sane and said he could take care of himself. He acknowledged having taken treatment for the liquor habit.

Sadie Nichols, or Mrs. Braunschweiger Jr., corroborated her husband’s testimony as to his condition at the time of the wedding. She said it was not a hasty marriage, but that the matter had been talked over between herself and her husband several times before. She did not believe him insane and had never noticed anything to indicate that such was a fact.

Judge Sanderson, after listening to all the evidence, ordered the prisoner released. His Honor said that, although the young man might be irrational when drinking, he was no fit subject for an insane asylum.

Braunschweiger Jr. at once left the courtroom with his wife. 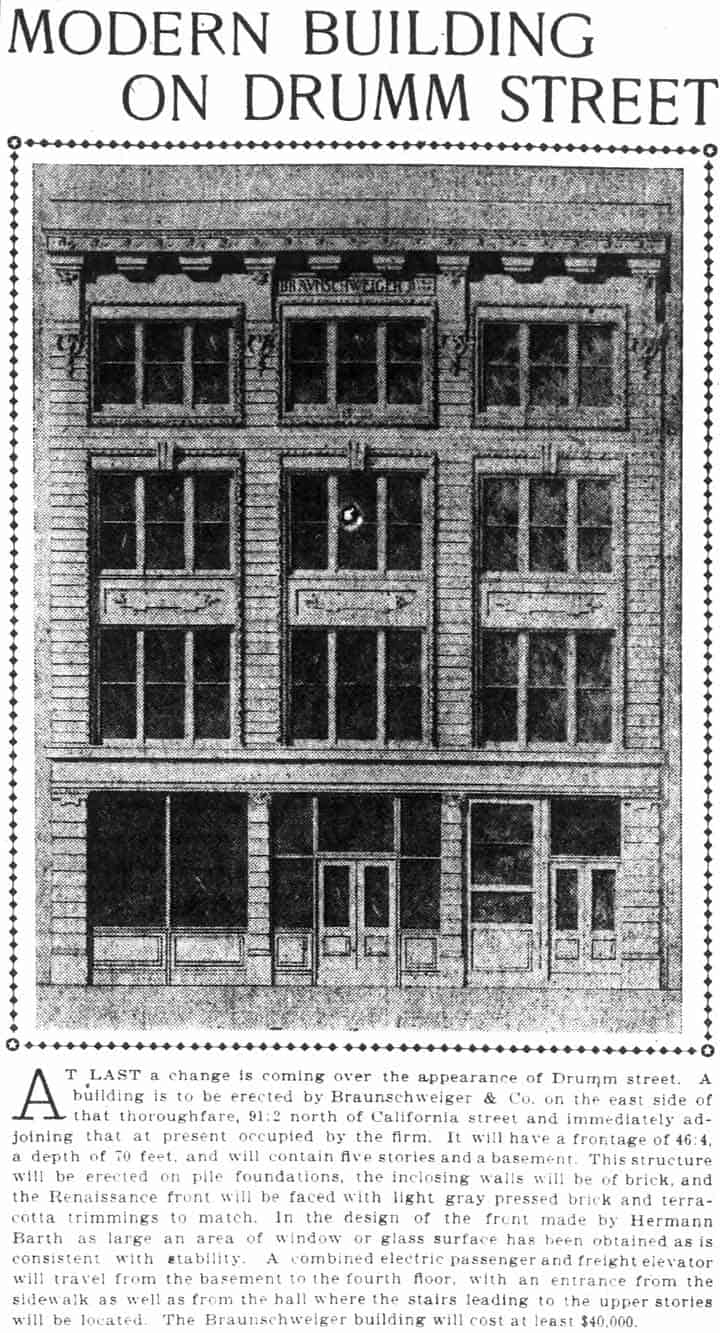 1906: The 1906 quake destroyed the company premises but Herman rebuilt and continued the business until retirement in 1913

Ferdinand Meyer V is a native of Baltimore, Maryland and has a BFA in Fine Art and Graphic Design from the Kansas City Art Institute and School of Design. Ferdinand is the founding Principal of FMG Design, a nationally recognized design consultation firm. Ferdinand is a passionate collector of American historical glass specializing in bitters bottles, color runs and related classic figural bottles. He is married to Elizabeth Jane Meyer and lives in Houston, Texas with their daughter and three wonderful grandchildren. The Meyers are also very involved in Quarter Horses, antiques and early United States postage stamps. Ferdinand is the past 6-year President of the Federation of Historical Bottle Collectors and is one of the founding members of the FOHBC Virtual Museum.
View all posts by Ferdinand Meyer V →
This entry was posted in Bitters, eBay, History, Liquor Merchant, Whiskey and tagged bitters, Braunschweiger, Bumsted, california, eBay, Fenkhausen, Grapentine, Herman, Hibernia, Nichols, Sadie, San Francisco, Western. Bookmark the permalink.