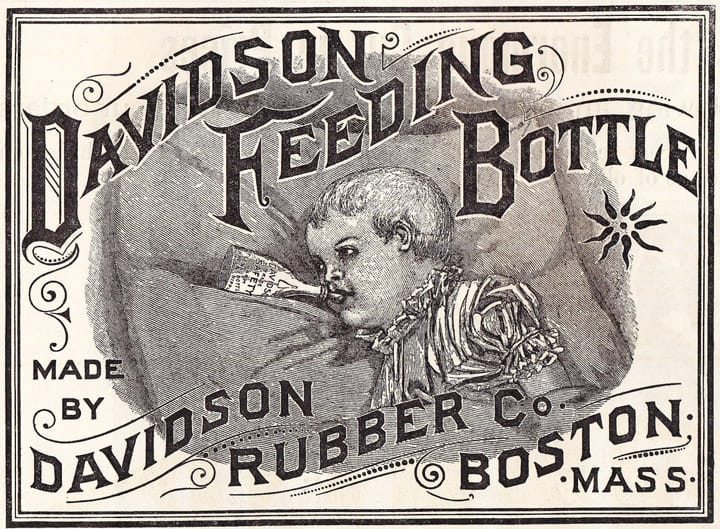 A couple of my last bitters posts have taken me to Boston. It was there that I noticed this cool, 1866 Davidson Feeding Bottle advertisement (see above) by Davidson Rubber Company. I just love the art and typography.

Can you believe their address is 19 Milk Street?

The second advertisement I found was for Davidson Nipples (see below) in 1898. Now I like that. Can you believe their address is 19 Milk Street? 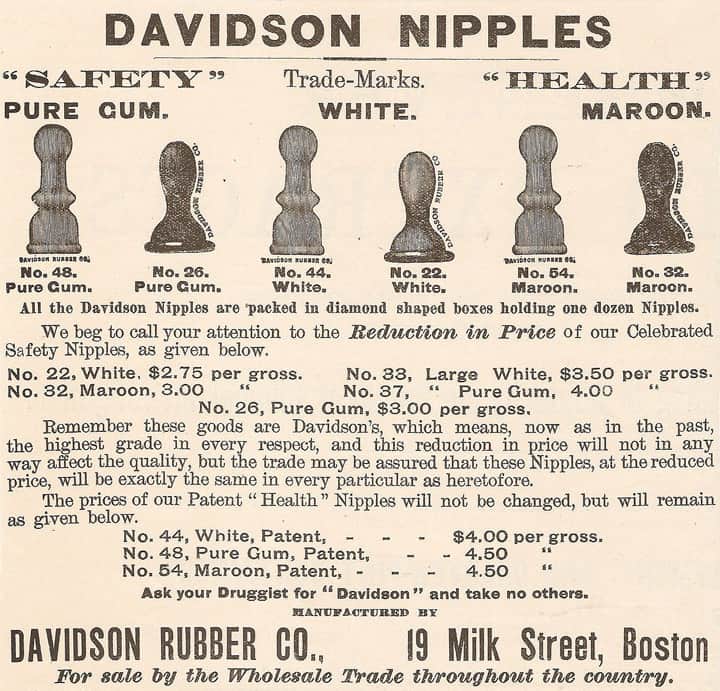 The earliest I can find any listing for Davidson (and I believe it to be Charles) is in 1863. This listing is for the Davidson Syringe Company (see 1865 advertisement below) located at Charlestown bridge. 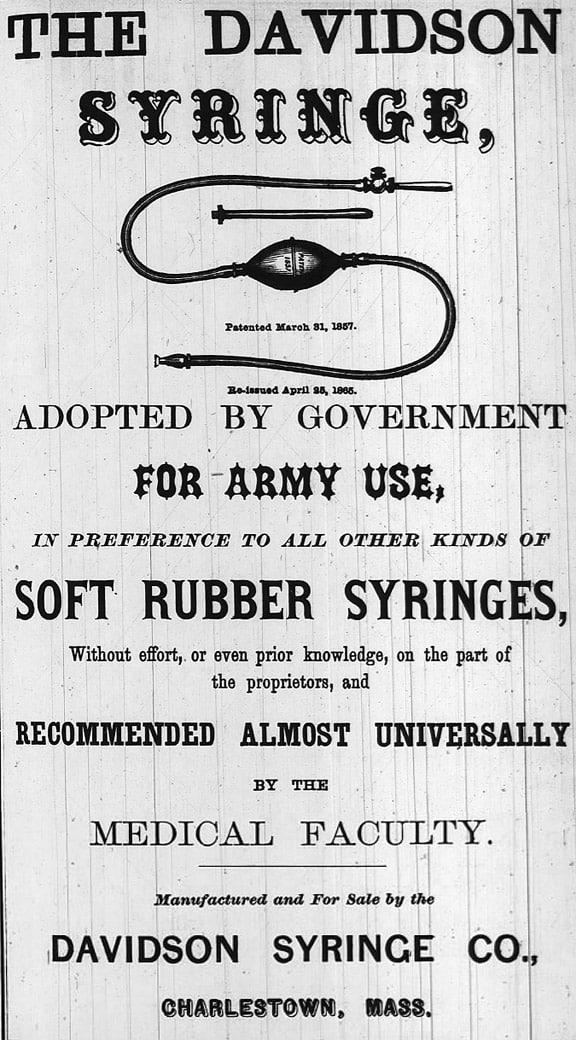 At this time they were putting out a bottle and a syringe as you can see from this excerpt:

Dr. F. E. Waxham presented for examination a FEEDING BOTTLE FOR USE IN CASES OF INTUBATION OF THE LARYNX. The feeding bottle consists of an ordinary nursing flask, with a rubber cork, with a small vent, through which a tube passes to the bottom of the bottle. To this tube is attached another leading to a bulb of a Davidson’s syringe, and this, in turn, is attached to a small-sized esophageal tube. In using this apparatus, the gag is placed between the jaws, the tube introduced into the Aesophagus, and the contents of the bottle quickly introduced by means of the bulb.

Many patients, especially young infants, do not take sufficient nourishment after intubation has been performed, on account of the coughing produced by the trickling of the liquid into the trachea. This apparatus obviates this difficulty. [The Boston Medical and Surgical Journal, 1866]

I see records and listings all the way up to 1922 or so for Davidson Rubber Company. At one time they really did have an address on Milk Street, but factory and production operations were elsewhere.

Passage: The Sterling Fountain Pen Co. was located at 19 Milk St. in Boston, and the Davidson Rubber Co. at Brighton St. in Charleston. 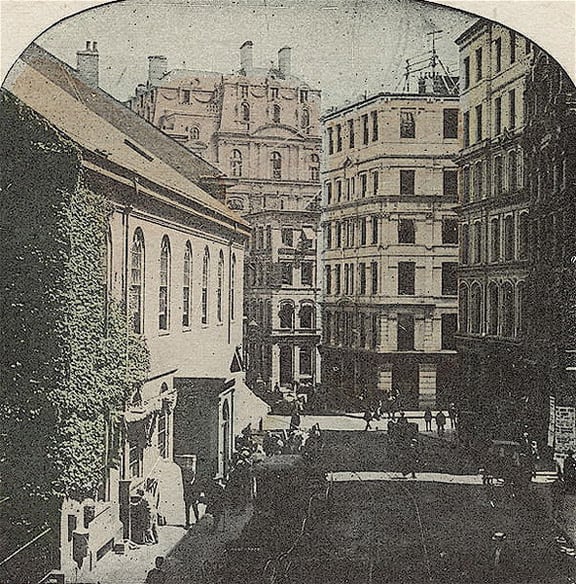 A little on Milk Street

Milk Street is a street in the financial district of Boston, Massachusetts. Milk Street was one of Boston’s earliest highways. The name “Milk Street” was given to the street in 1708 due to the milk market at the location. One of the first post offices in Boston was located on the street in 1711, when the first regular postal routes to Maine, Plymouth and New York were established. [Wikipedia] 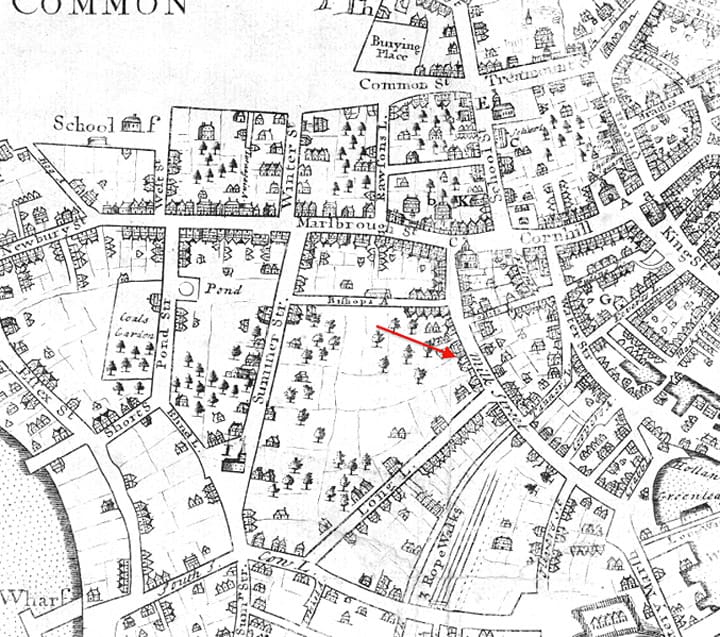 Detail of 1723 map of Boston, showing Milk Street and vicinity

Grace Croft’s 1952 work, titled “History and Genealogy of Milk Family”, also proposes that Milk Street may have been named for John Milk, an early shipwright in Boston. The land was originally conveyed to his father, also John Milk, in October 1666. 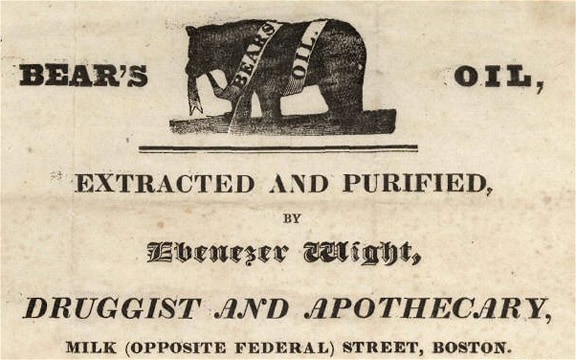 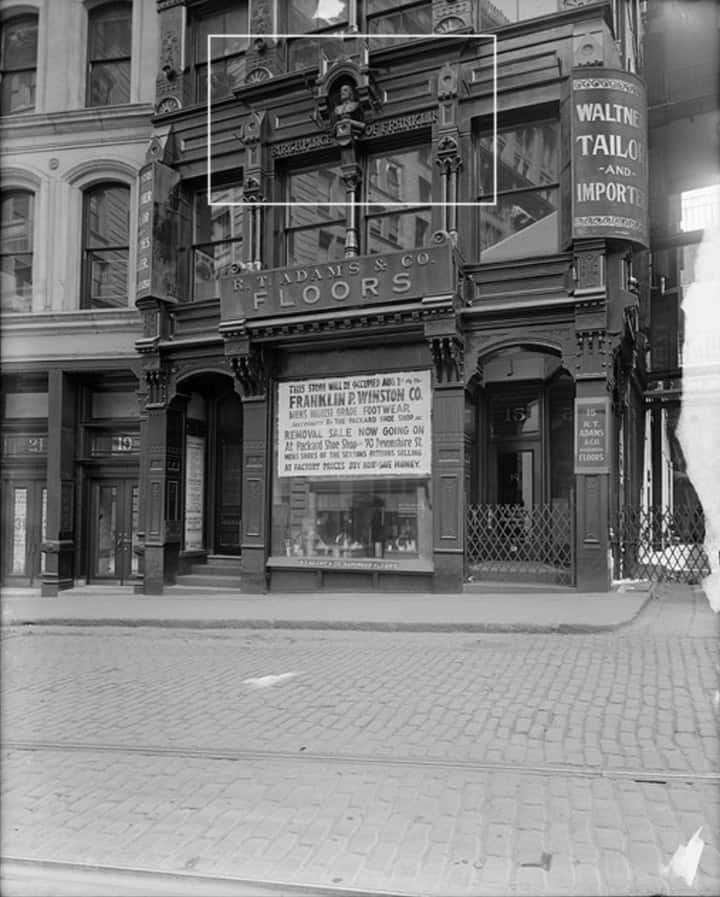 Ferdinand Meyer V is a native of Baltimore, Maryland and has a BFA in Fine Art and Graphic Design from the Kansas City Art Institute and School of Design. Ferdinand is the founding Principal of FMG Design, a nationally recognized design consultation firm. Ferdinand is a passionate collector of American historical glass specializing in bitters bottles, color runs and related classic figural bottles. He is married to Elizabeth Jane Meyer and lives in Houston, Texas with their daughter and three wonderful grandchildren. The Meyers are also very involved in Quarter Horses, antiques and early United States postage stamps. Ferdinand is the past 6-year President of the Federation of Historical Bottle Collectors and is one of the founding members of the FOHBC Virtual Museum.
View all posts by Ferdinand Meyer V →
This entry was posted in Advertising, History, Infant Feeders, Questions, Technology and tagged Benjamin Franklin, Boston, Bottle, Charlestown, Davidson, feeding, Massachusetts, Milk, Nipples, nursing, rubber, syringe. Bookmark the permalink.