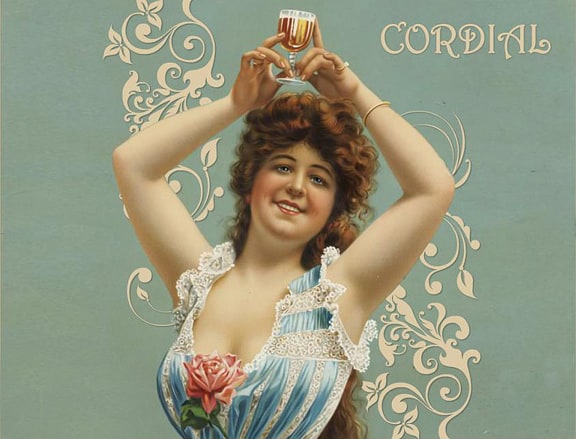 John Pastor has this gorgeous Clouds Cordial in a vibrant lemon yellow in his American Glass Gallery Auction that closes tonight. Man-oh-man…if this just were a bitters. The lot picture and write-up: 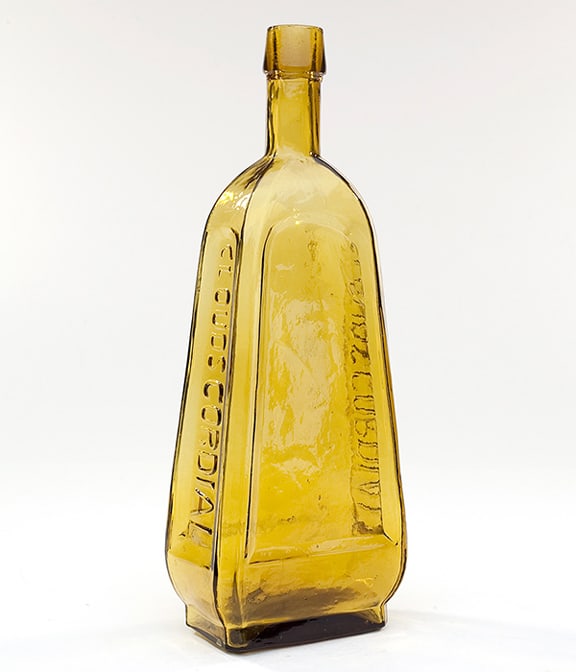 The advertisement above is for flavor only and not related directly to the Clouds Cordial brand. I just liked the picture.

“in 1862 Dr. Cloud left Kentucky and engaged in the retail drug business at Sullivan, Indiana. In 1865 he came to Evansville, and engaged with his brother-in-law, Wm. M. Akin, Esq., in the wholesale drug business, and had complete control of the manufacturing department.” 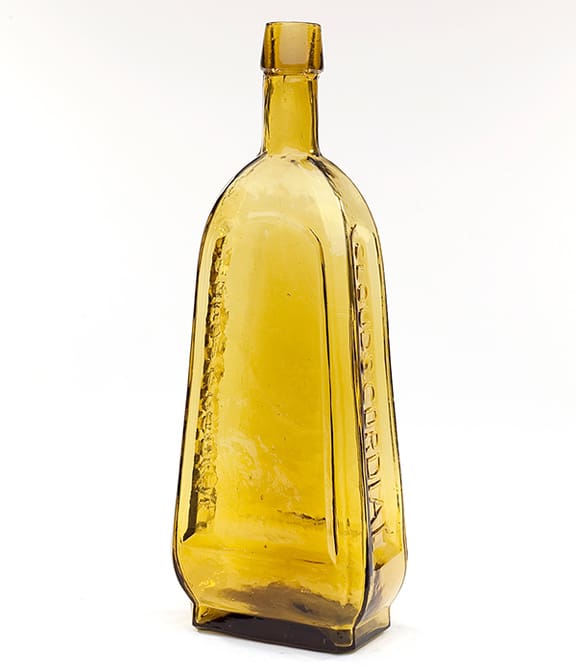 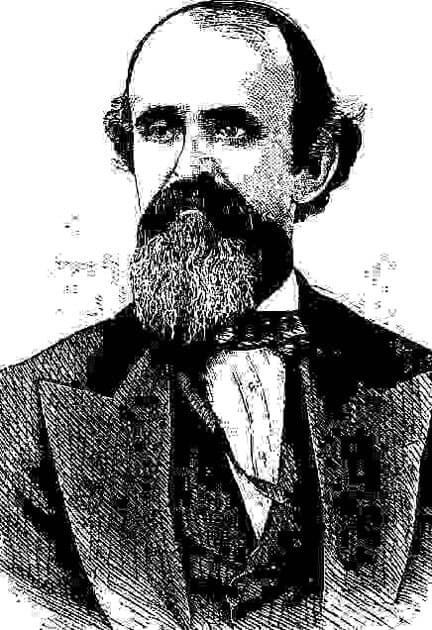 James C. Cloud, the father of Dr. H. W. Cloud, was born in Boone County, Kentucky, in the year 1805, and was a farmer by occupation. He remained here until his marriage to Miss Susan Snyder, of the same county. Mr. Cloud soon afterward removed to Henderson County, and engaged in the family grocery business.

On the 7th of September, 1833, the subject of this sketch was born; and when about fifteen years of age, his parents went to Louisville, Kentucky, where he enjoyed excellent facilities in securing a common school education. Having a taste for books, and literary ambition, coupled with a determination to secure an education, he entered Asbury University with only twenty dollars to last him for four years. He remained here until the second term of his Senior year, when, with eight of his class, in the noted Rebellion of ’56, he withdrew from Asbury, and graduated at the State University.

While at college, Dr. Cloud’s favorite studies were Geology and Chemistry, and he pursued an after-graduate course in chemistry and medicine at the University of Kentucky, at Louisville. He received the degree of A.M. from Bloomington, and, in 1871, the same honorary degree from Asbury. For some time Dr. Cloud had charge of a select school at Owensboro; and his rare fund of information, his excellent literary qualities and genial disposition, made it a great success. He was speedily called to the Presidency of Henry Female College, at Newcastle, Kentucky. There is no doubt, had he chosen to follow his course, he would have gained high rank among the best professors and educators of the country. The college was in a most flourishing condition, with one hundred and fifty ladies in attendance, mostly from the South. The breaking out of the war interfered, however, with its further progress; and in 1862 Dr. Cloud left Kentucky and engaged in the retail drug business at Sullivan, Indiana. In 1865 he came to Evansville, and engaged with his brother-in-law, Wm. M. Akin, Esq., in the wholesale drug business, and had complete control of the manufacturing department.

As a practical chemist, Dr. Cloud has enjoyed rare success; while his business ability and manly traits as a gentleman are well recognized in this section. He has followed his favorite study-Chemistry and its kindred subjects-with ardor all his life; but not to the neglect of general literature and history. He is well versed in philological studies, and is a very fine Latin scholar, in particular. Dr. Cloud is an educated man and a gentleman of high worth, and has accomplished much for the educational interests of our city in his responsible position as President of the Board of Education. In ’59 Dr. Cloud was married to Miss Sarah M. Akin, daughter of R. M. Akin, Esq., of Carlisle, Indiana. Three children have been born to them-two daughters and one son-the latter named in honor of the greatest of living scientists of the present generation-Faraday.

*A Special thanks to Brandon Smith for providing the lead for the information above. 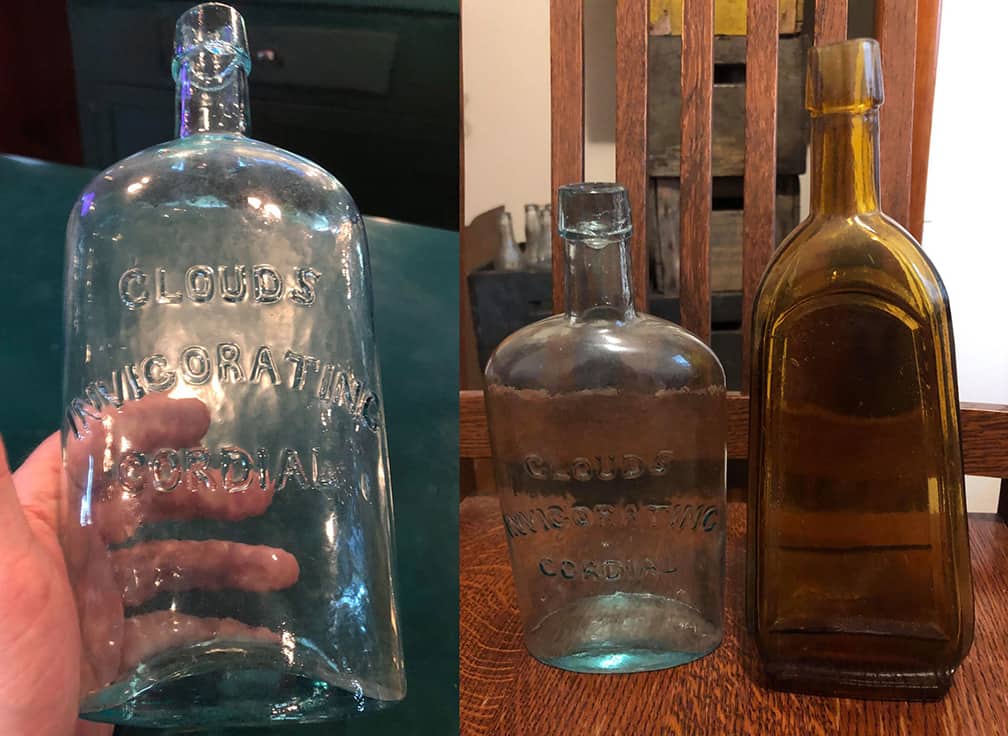 Ferdinand Meyer V is a native of Baltimore, Maryland and has a BFA in Fine Art and Graphic Design from the Kansas City Art Institute and School of Design. Ferdinand is the founding Principal of FMG Design, a nationally recognized design consultation firm. Ferdinand is a passionate collector of American historical glass specializing in bitters bottles, color runs and related classic figural bottles. He is married to Elizabeth Jane Meyer and lives in Houston, Texas with their daughter and three wonderful grandchildren. The Meyers are also very involved in Quarter Horses, antiques and early United States postage stamps. Ferdinand is the past 6-year President of the Federation of Historical Bottle Collectors and is one of the founding members of the FOHBC Virtual Museum.
View all posts by Ferdinand Meyer V →
This entry was posted in Auction News, Cordial and tagged Brandon Smith, Clouds, Cordial, Evansville, Hiram Wilber Cloud, indiana, James C. Cloud, Kentucky, Louisville, Sarah M. Akin, Tim Pillow. Bookmark the permalink.