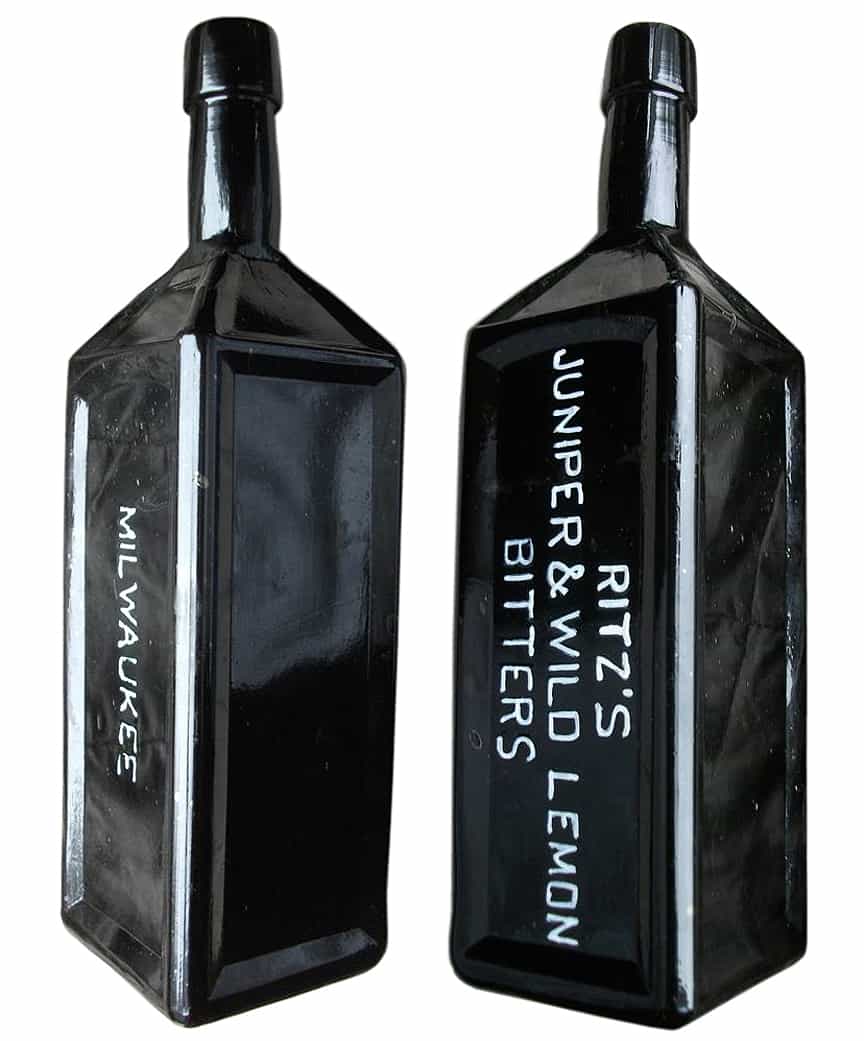 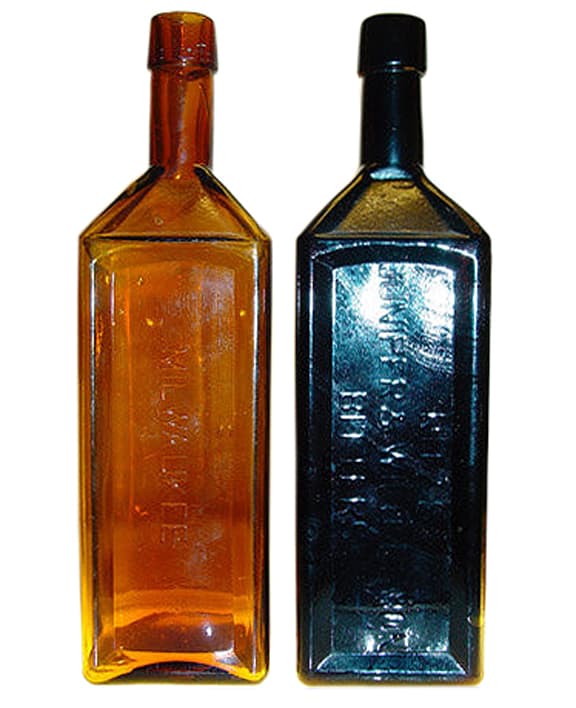 Ritz’s Juniper & Wild Lemon Bitters
This is a rare bitters bottle from Milwaukee, Wisconsin from the 1870s. It is embossed RITZ’S JUNIPER & WILD LEMON BITTERS on one panel and MILWAUKEE, WIS. on the opposite. They were made in amber and black glass. The lip is applied and tooled. – MrBottles.com (Steven Libbey)

Reading the label on one of the bottle pictures from Steven Libbey below, you see the name F. Dohmen. A search on the internet reveals that the F. Dohmen drug business had been around for 150 years and was purchased by Cardinal Health Inc. in 2006 when they purchased their wholesale business unit. In 2007, Dohmen sold its Jascorp pharmacy management software subsidiary to Arcadia Resources Inc., in Southfield, Michigan. 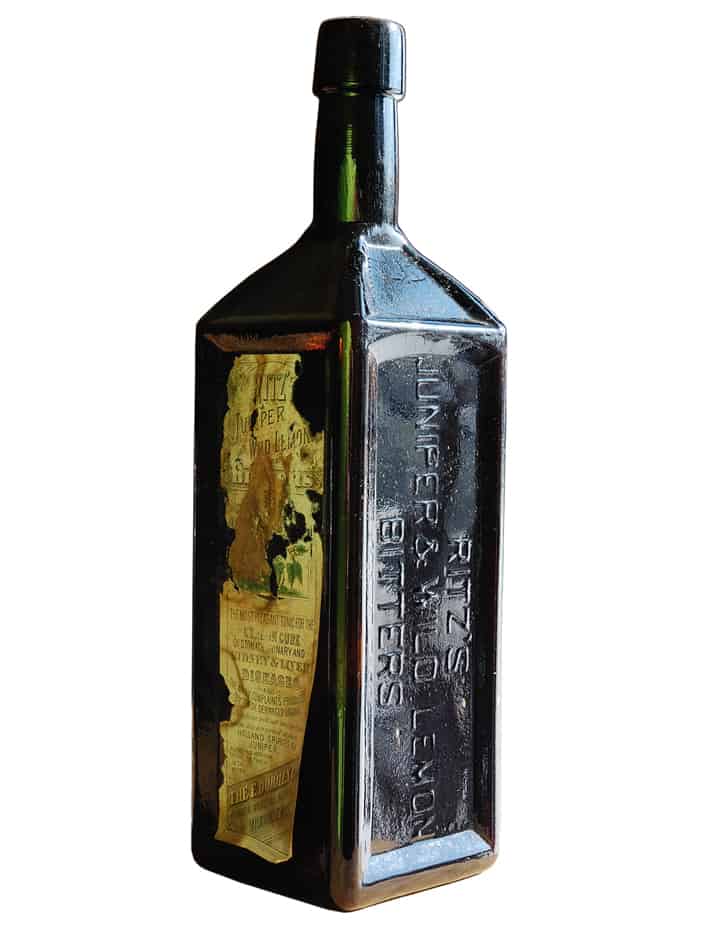 Steven Libbey – “This is one of the coolest bottles ever. Not only is is a neat embossed bottle it is one of two attic mint with labels. The two were found inside the walls of a barn up north.” Labeled Ritz’s Juniper & Wild Lemon Bitters Milwaukee – MrBottles.com

Label: RITZ’S JUNIPER & WILD LEMON BITTERS. The most pleasant tonic for the Certain Cure of Stomach, Urinary and Kidney & Liver Diseases and the many complaints produced by these deranged organs. This medicine will not sour (?) or age (?) it is preserved in pure Holland Spirits of Juniper. Notice this medicine should be taken in sweet (?) water. THE F. DOHMEN CO., General Wholesale Agents, Milwaukee, Wis.

Friedrich (Frederick) W. Dohmen, aka Fritz (could this be where the Ritz Bitters name came from?), was a native of Dueren on the Rhine in Germany, and was born on December 22, 1831 (some information says 1832). His father was Friedrich Dohmen and his mother, Anna Kerres. He married Josephine Cramer (Wollseiffen), born February 28, 1838, in the same country. They were married before coming to the United States in 1855 and had only four hundred dollars in wedding gifts to help them get started. They located in Milwaukee, where Dohmen first worked at Myers Druggists and then embarked very quickly and established an Apotheke, retail and wholesale drug business on the prime river wharves with frontage along Milwaukee’s premier business street bearing the address, 63 East Water Street. Returning to Germany he enlisted the help of his brothers, Peter, Heinrich and Johann. His previous six years of German pharmaceutical training in his village set him apart in the largely unregulated United States field, where incompetence and quack remedies were the norm. Dohmen’s business flourished. His integrity and commitment to quality charted a clear course for the Dohmen Company to follow as they eventually grew to be a national drug wholesaler by the end of the 20th century. 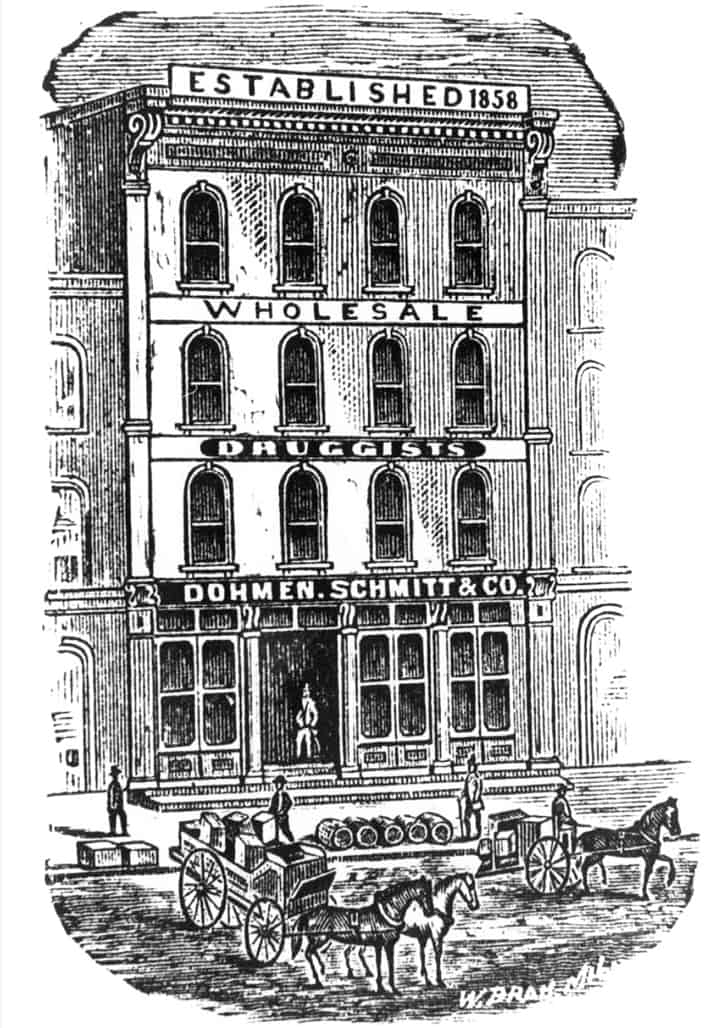 In 1858, Dohmen decided to embark with the small scale Deutsch Apotheke, wholesale and retail drug business under the name of Dohmen & Schulder (Charles S. Schulder). Later his firm became known as Dohmen & Miller, and then in 1860 as Dohmen, Schmidt & Co. (William S. Schmidt) and then Dohmen, Schmidt & Schulder in 1862. On the 9th of September 1867, a fire destroyed the company store (see picture below), which took the fire department four days to quench the burning oils and varnishes. They worked hard to re-establish and were up in business again in about six weeks. 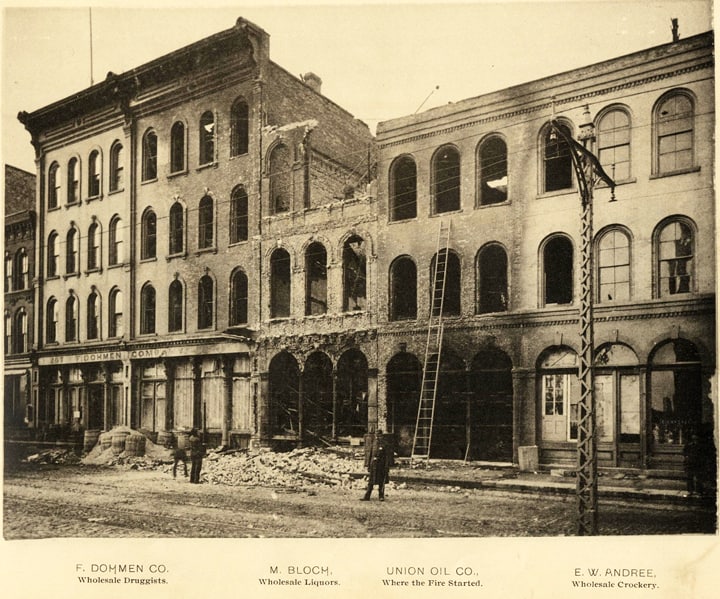 It was 1884 when F. Dohmen Company was incorporated. At this time William F. Dohmen was the president of F. Dohmen Company, Limited, wholesale druggists of Milwaukee. He was the son of Frederick Dohmen, being made the president of the same. He devoted the best years of his life to building up the business, and that he succeeded exceptionally well may be judged from the growth and wide spread popularity of the firm. On December 1, 1898 Frederick Dohmen died. 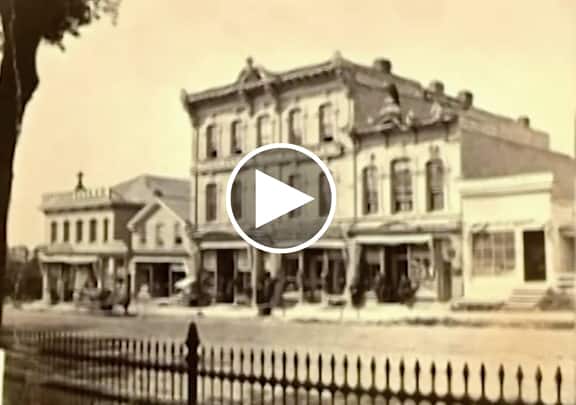 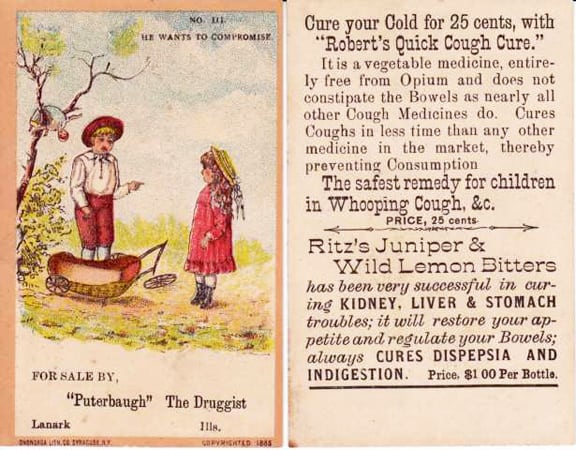 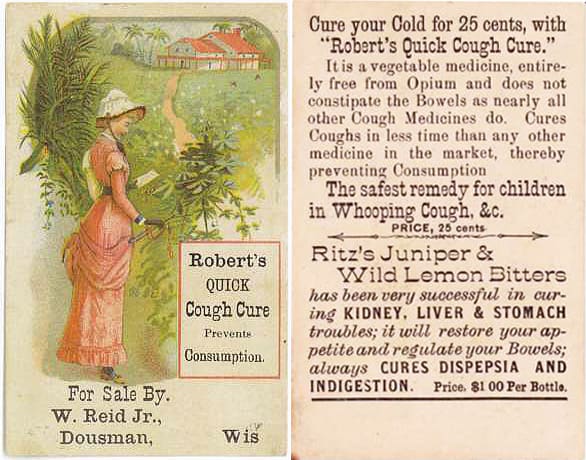 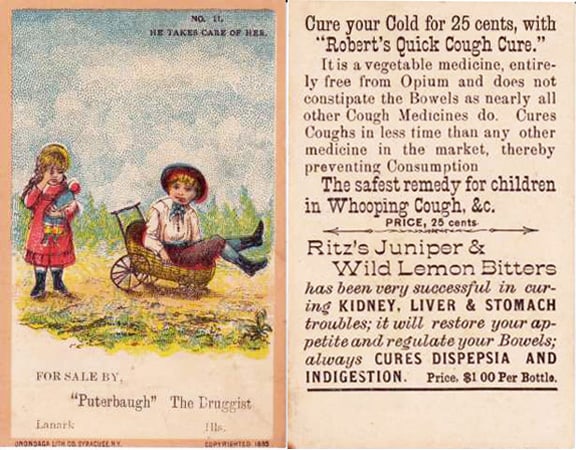 Ferdinand Meyer V is a native of Baltimore, Maryland and has a BFA in Fine Art and Graphic Design from the Kansas City Art Institute and School of Design. Ferdinand is the founding Principal of FMG Design, a nationally recognized design consultation firm. Ferdinand is a passionate collector of American historical glass specializing in bitters bottles, color runs and related classic figural bottles. He is married to Elizabeth Jane Meyer and lives in Houston, Texas with their daughter and three wonderful grandchildren. The Meyers are also very involved in Quarter Horses, antiques and early United States postage stamps. Ferdinand is the past 6-year President of the Federation of Historical Bottle Collectors and is one of the founding members of the FOHBC Virtual Museum.
View all posts by Ferdinand Meyer V →
This entry was posted in Apothecary, Bitters, Druggist & Drugstore, Holiday, Medicines & Cures, Tonics, Trade Cards and tagged Apotheke, Deutsch, drug, Druggists, F. Dohmen, Frederick, Friedrich, Fritz, Germany, Joe Gourd, Juniper, Lemon, Mark Nelson, Miller, milwaukee, Ritz, Ritz's, Schmidt, Schulder, Steve Libbey, Wisconsin. Bookmark the permalink.