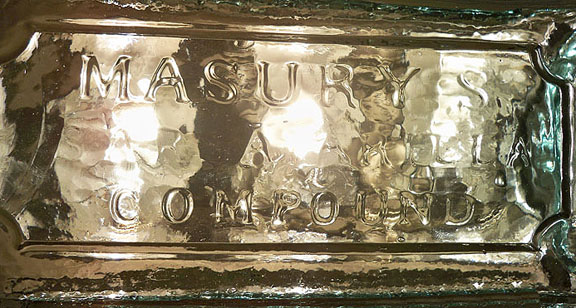 A number of us bitters collectors have sarsaparilla bottles in our collection and of course there are others that specialize in collecting sarsaparilla. Up on ebay now is a killer bottle that really caught my attention. I suppose the raw beauty of the pictures grabbed my attention first and I had not heard of Masury’s Compound Extract of Sarsaparilla before. This bottle size is actually 2 quarts!

THE LARGEST BOTTLE IN THE WORLD

Recently I did a series of bitters posts with brands with “WAHOO” in the name. Notice that the advertisement below tags on “WAU-A-HOO” to the sarsparilla name. The ebay listing is as follows:

For your consideration is a super rare applied top aqua “Masury’s Sarsaparilla Compound / J. & T. Hawk’s / Rochester N.Y.” in three fancy indented panels. This bottle will make a huge presence on any shelf! Standing just over 11 1/2″ tall by almost 4 3/8″ wide, and 2 1/2″ deep, this example is purely hammered with whittle. Excellent crudeness, just look at the twisted neck and huge gloppy top. I hate to part with this one, but it’s time it found a new home. This is likely not a dug bottle, clean and super nice condition. The word “sarsaparilla” is a little light, but easily readable. No chips, cracks, dings, or distracting stain. Please see pictures for full description Bid with confidence, you may not see this bottle or an example this nice again. You will not be disappointed in this bottle. – bottledave2002 (100% Positive Feedback)

The iron pontiled blue ones are even nicer!! One whole one that I know of. I have seen 3 or 4 of the aqua ones. You can see from the comparison to the Wisharts, it is a BIG bottle!

Around 1850 there was a lot of competition between sarsaparilla compound medicine makers. Two of the biggest selling products were A B & D Sand’s Sarsaparilla and Masury’s Sarsaparilla. These companies were always looking for gimmicks to help peddle thier nostrums. One successful approach was to offer a larger bottle for the same money. The customer would feel like they were getting a real deal while there would be little increased cost in manufacturing.

Both medicines sold in massive quart bottles and their advertising emphasized the volume deal. The proprietors of Masury’s Sarsaparilla, J & T Hawks of Rochester, decided to go for broke and they produced the product in an enormous two quart bottle which they claimed was the largest in the world. Apparently customers were not enthralled with this huge bottle and a relatively few seemed to have sold. It may have just been too big to haul home from the market or the manufacturing cost may have caught up with them.

The 1850 advertisement indicates the medicine price was $1.00, quite a lot of money in at the time. Note near the bottle the claim “The Largest Bottle in the World” 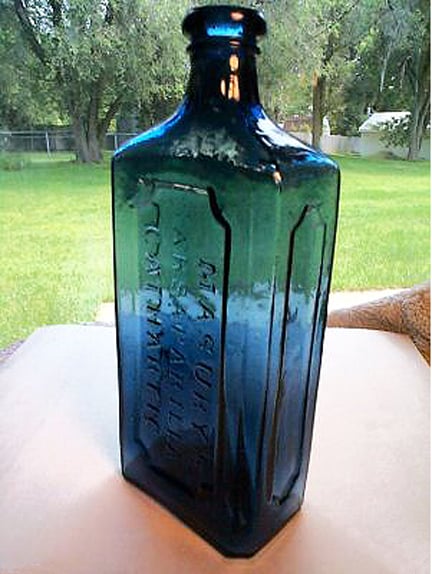 Pontiled, blue, MASURY’S SARSAPARILLA CATHARTIC – According to Robert Hinely, sold on ebay a few years back for $17,500 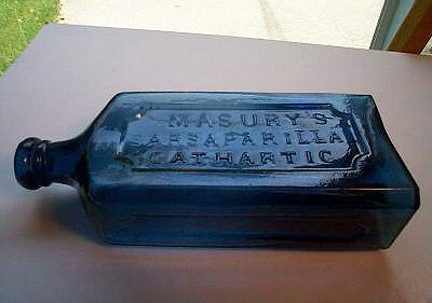 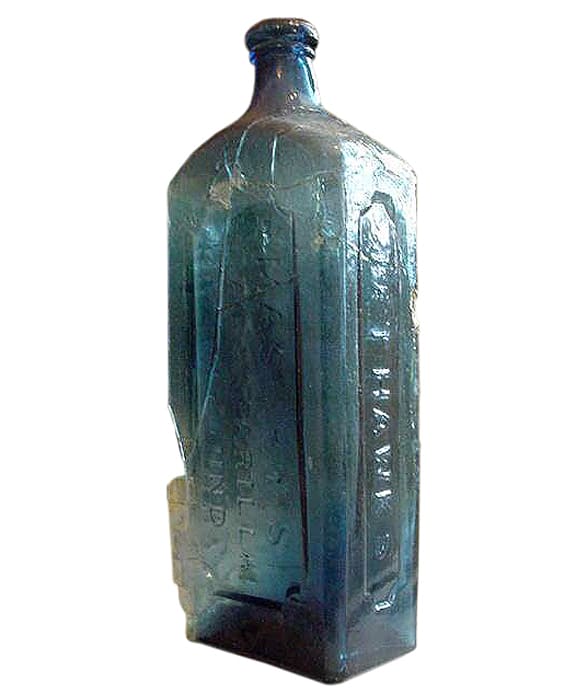 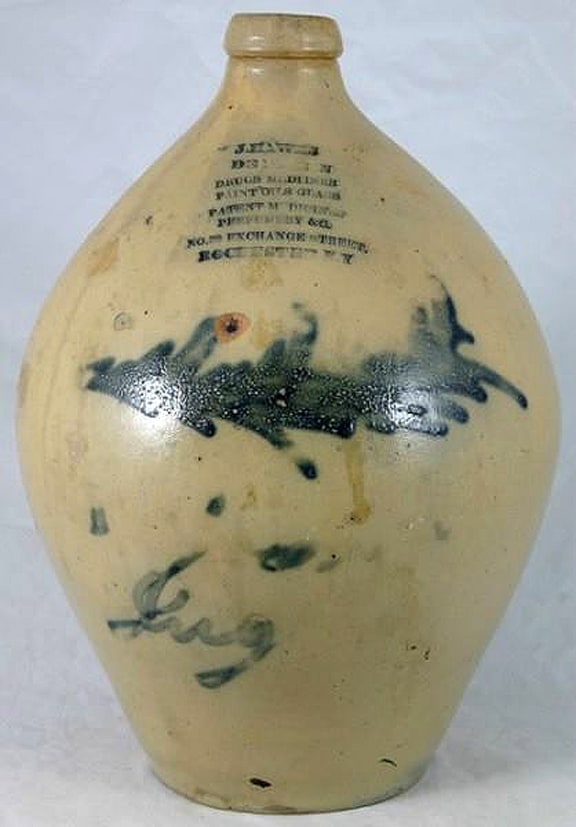 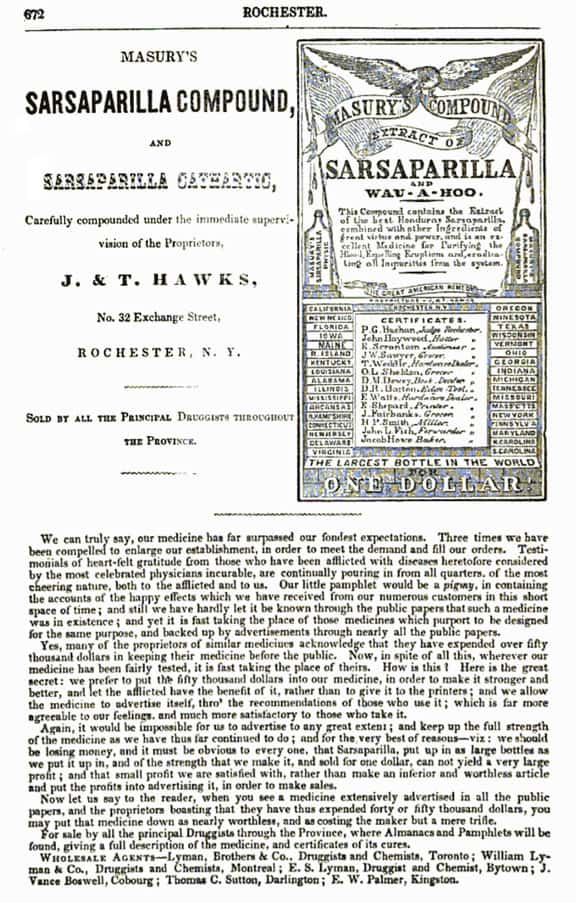 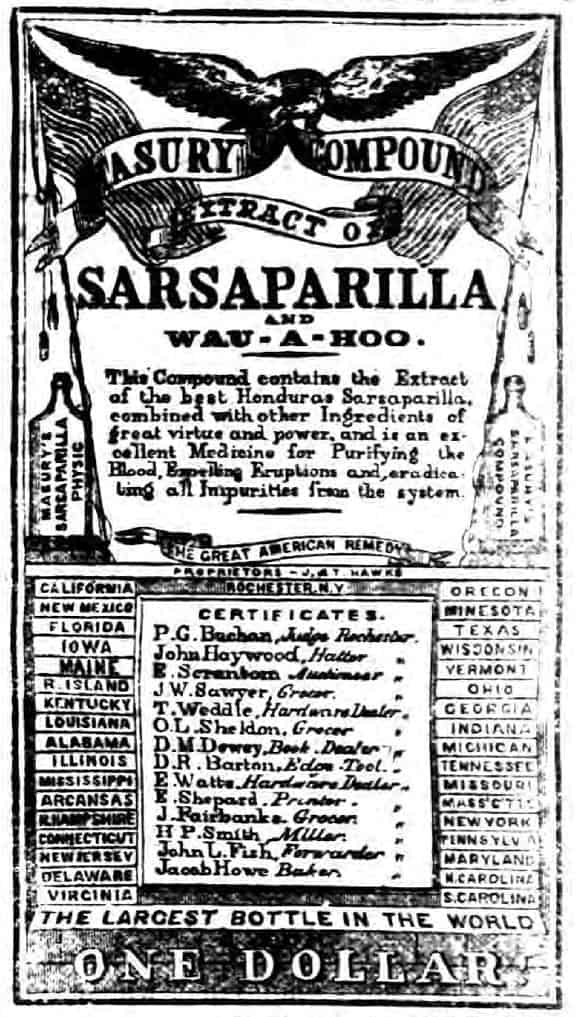 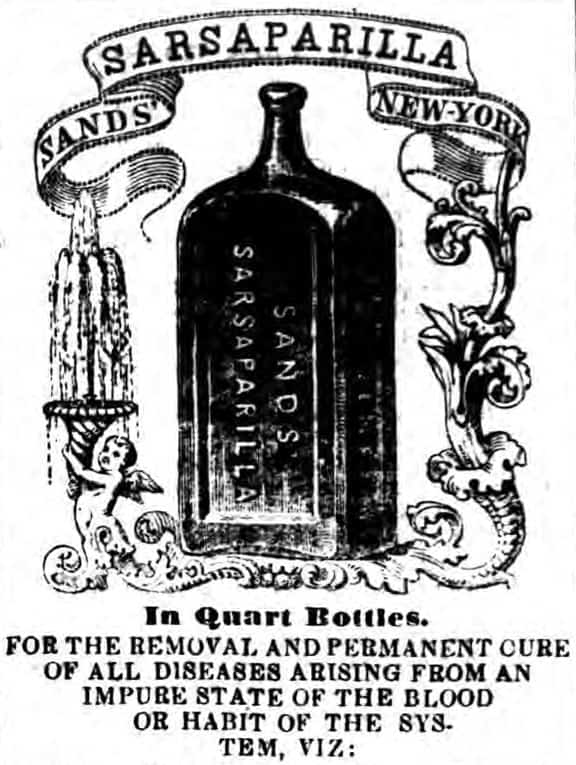 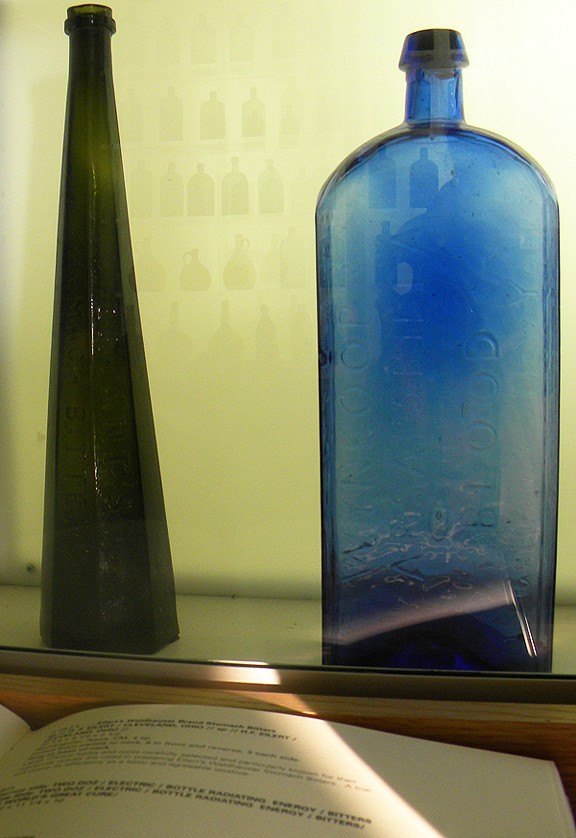 Ferdinand Meyer V is a native of Baltimore, Maryland and has a BFA in Fine Art and Graphic Design from the Kansas City Art Institute and School of Design. Ferdinand is the founding Principal of FMG Design, a nationally recognized design consultation firm. Ferdinand is a passionate collector of American historical glass specializing in bitters bottles, color runs and related classic figural bottles. He is married to Elizabeth Jane Meyer and lives in Houston, Texas with their daughter and three wonderful grandchildren. The Meyers are also very involved in Quarter Horses, antiques and early United States postage stamps. Ferdinand is the past 6-year President of the Federation of Historical Bottle Collectors and is one of the founding members of the FOHBC Virtual Museum.
View all posts by Ferdinand Meyer V →
This entry was posted in Advertising, eBay, History, Medicines & Cures, Sarsaparilla, Stoneware and tagged Cathartic, eBay, J. & T. Hawk, Mark Yates, Masury, Masury's, New York, Robert Hinely, Rochester, Sand's, Sarsaparilla, Wau-A-Hoo, Wynkoop. Bookmark the permalink.