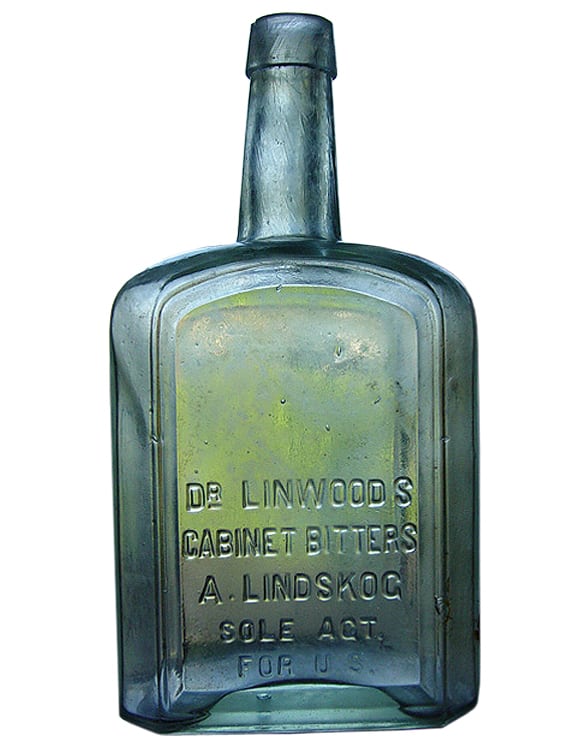 I recently added this unlisted color, extremely rare Dr. Linwood’s Cabinet Bitters to my collection from a listing on ebay. According to the seller, the bottle was dug in Chicago in the late 1970s – early 1980s, by Chicago father and son bottle diggers with two examples in two different colors being dug. At first, I was running into blank walls trying to search for information. I wanted to find out who was Dr. Linwood and who was A. Lindskog? Now that is a strong Swedish name.

First of all, the Carlyn Ring and W.C. Ham listing in Bitters Bottles is as follows: 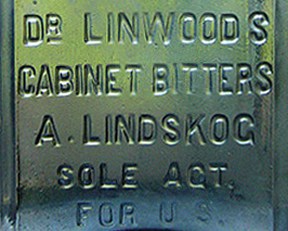 My first sound hit occurred after I searched for an ‘A. Lindskog’ in Chicago. I knew this was a later bottle so anything centered around 1900 might work. It looks like a ‘Axle Lindskog attended this grand event for Wright & Taylor Distillery.

What is so cool about the event is the Pennsylvania Railroad “Old Charter Special” locomotive and passenger cars that were used to transport the liquor dealers from Chicago to Louisville, Kentucky and back. Man I wish I could of been on that train and at that event! You can see the train in the background of the group pose below.  The story was reported in The Wine and Spirit Bulletin on June 1, 1916.

A BIG PARTY OF VISITORS TO OLD CHARTER DISTILLERY

Kentucky and Kentuckians are noted for their hospitality, and Kentucky distillers have always ranked in the forefront of hosts. A party of 100 liquor dealers from Chicago, Ill., and some nearby towns, who, on May 22nd and 23rd were the guests of Wright & Taylor, of Louisville, are now ready to proclaim the distilling company, its officers and representatives, as the pre-eminent hosts of Kentucky. 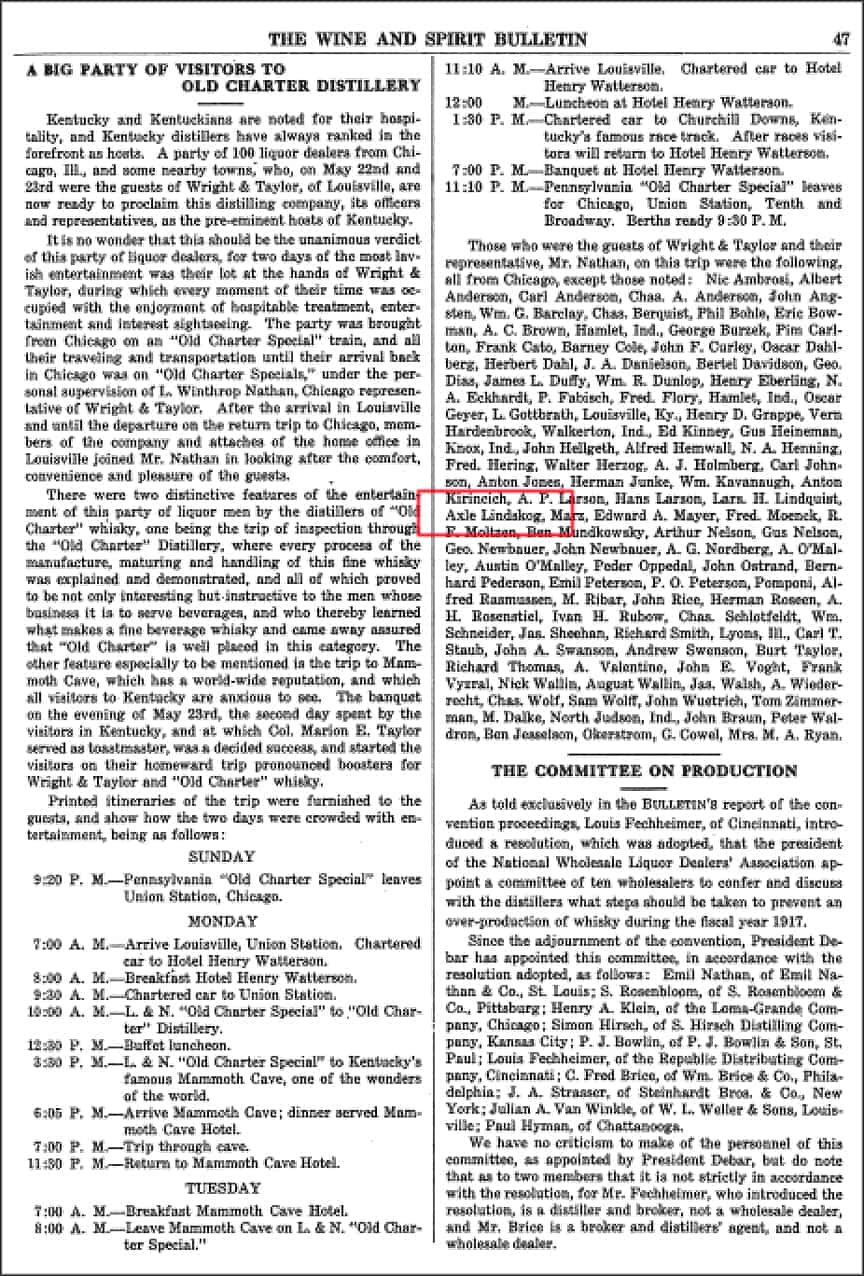 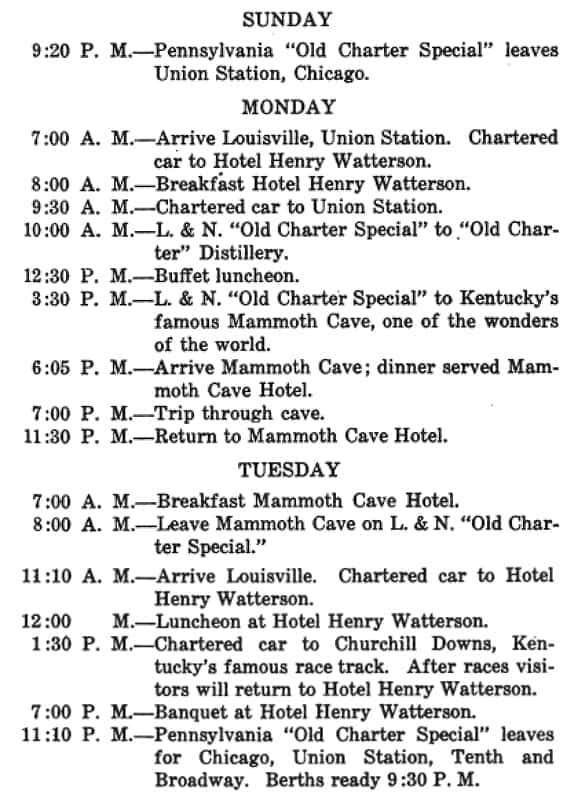 Look at this fantastic itinerary of events starting with “The Old Charter Special” leaving Chicago with the liquor dealers and arriving in Louisville. 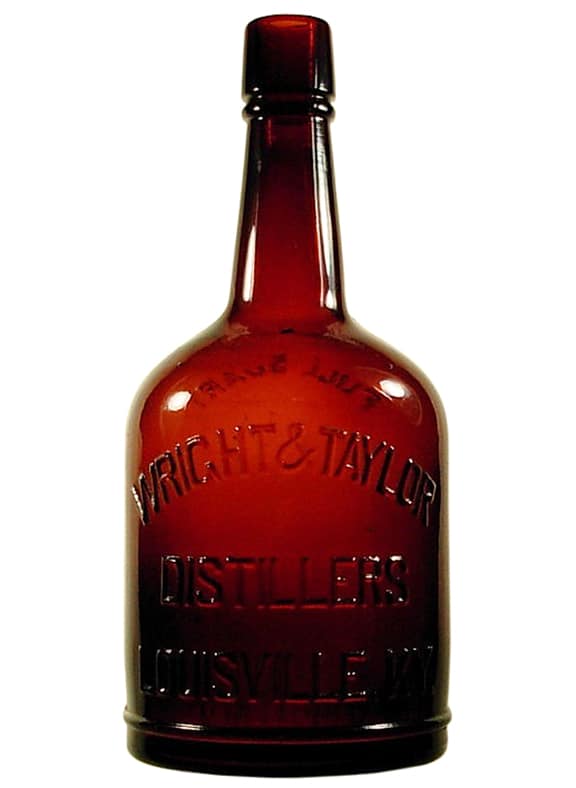 According to PrePro.com, WRIGHT & TAYLOR was in business in Louisville, Kentucky from 1886 – 1919. 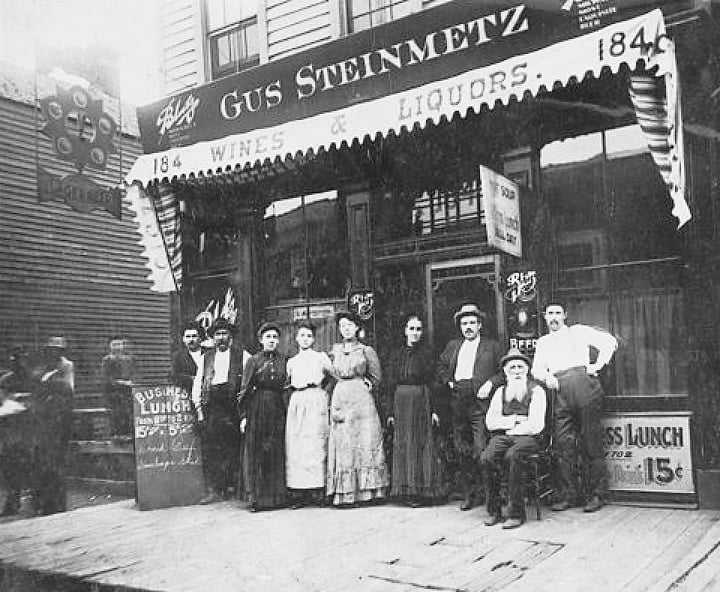 Ferdinand Meyer V is a native of Baltimore, Maryland and has a BFA in Fine Art and Graphic Design from the Kansas City Art Institute and School of Design. Ferdinand is the founding Principal of FMG Design, a nationally recognized design consultation firm. Ferdinand is a passionate collector of American historical glass specializing in bitters bottles, color runs and related classic figural bottles. He is married to Elizabeth Jane Meyer and lives in Houston, Texas with their daughter and three wonderful grandchildren. The Meyers are also very involved in Quarter Horses, antiques and early United States postage stamps. Ferdinand is the past 6-year President of the Federation of Historical Bottle Collectors and is one of the founding members of the FOHBC Virtual Museum.
View all posts by Ferdinand Meyer V →
This entry was posted in Article Publications, Bitters, eBay, History, Liquor Merchant, Questions, Spirits, Whiskey and tagged Axel Lindskog, bitters, cabinet, chicago, Distillery, Dr. Linwood, Kentucky, Louisville, Old Charter, Sweden, train, Wright & Taylor. Bookmark the permalink.