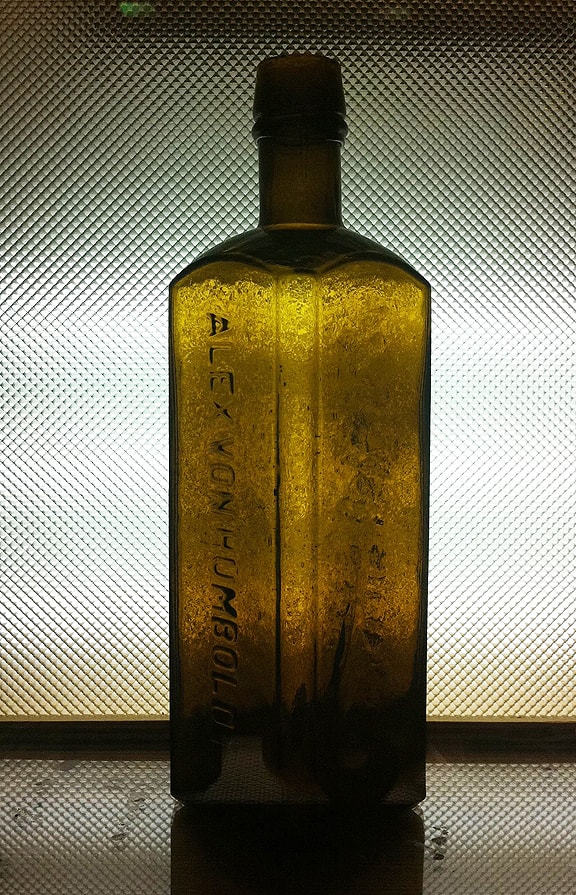 At the 2011 Downieville Antique Bottle Show I had the fortune to see, handle and photograph one of the most extraordinary bitters squares I have ever seen, that being Roger Terry’s Alex Von Humboldts Stomach Bitters in a killer amber coloration (see picture above). By the way, the extraordinary Downieville Bottle Show is next month, so don’t miss it. I have rented a house on the river for a week to chill out, hit the show, see my western bottle friends and run through the mountain trails with my baby and extraordinary Weimeraner, Coco. Now I just need to figure out how to get there?

Read: Bottle Still Life Shots from our Porch in Downieville 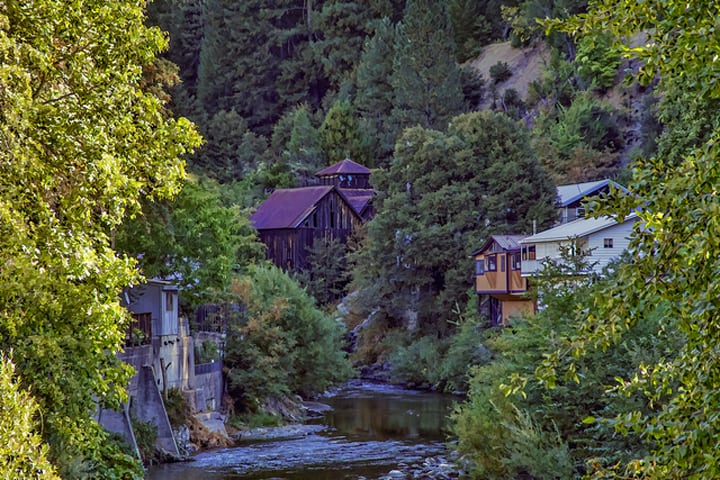 The extraordinary and historic Downieville, California: location of the 2013 Downieville Antique Bottle Show

Anyway, where was I here? Oh, how am I going to get to Downieville with Coco and some bottles? Hmm…that is the question. Certainly do not have time to drive 2033.1 miles and take off a day and a half. Guess we will fly. Do I buy her a seat or do I fly in a dog crate with her? 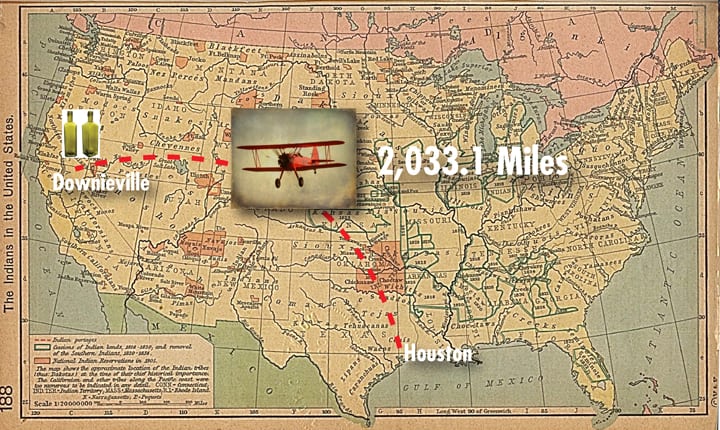 What prompted this post, like many of my posts, are a series of random thoughts, images and tasks that orbit in my mind. Eventually they start sticking together and forming into a post. With this, it was western bitters collector extraordinaire, Dale Mlasko (Oregon) finally landing the subject amber Von Humboldts and adding it to his collection. He also has the green example that once resided on my shelves for some time. Boy I miss that one. Anyway, Dale has both of these great bottles and sent some pictures recently which I have posted below along with some shots of the olive green example that I took. 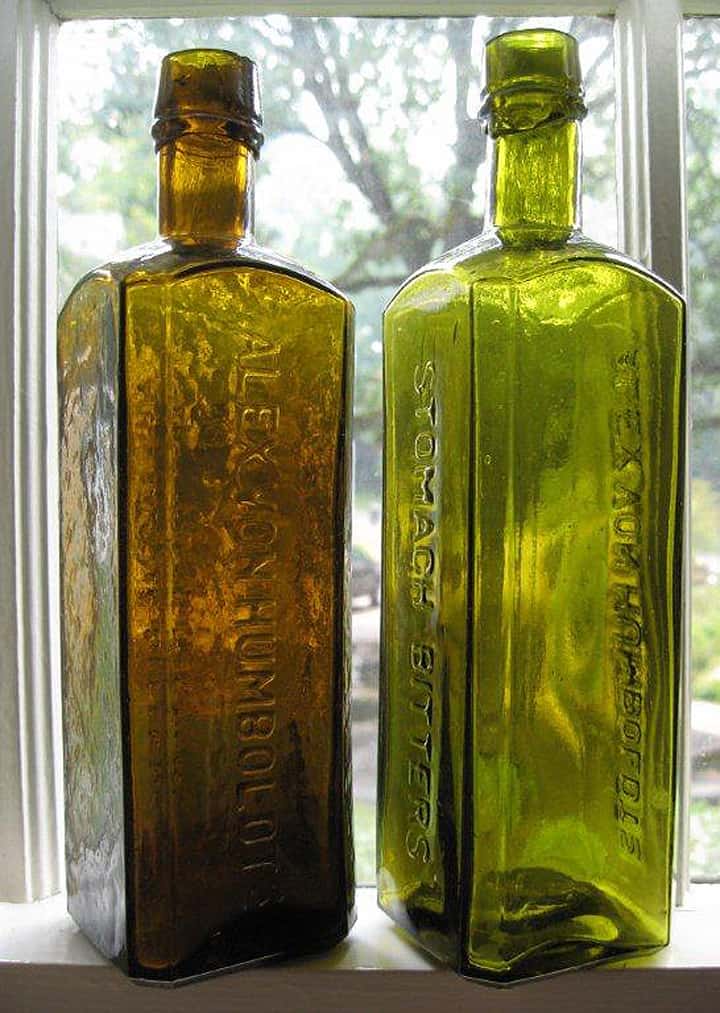 The Carolyn Ring and W. C. Ham listing in Bitters Bottles is as follows:

Label: Von Humboldt’s Celebrated German Bitters will cure liver complaint, jaundice, dyspepsia, debility, chronic diarrhoea, weakness of the nerves, and all diseases arising from a disordered liver or stomach, such as acidity of the stomach, biliousness, constipation, colic, determination of the blood to the head, eructations of wind, fullness and oppression to the stomach, fluttering at the heat, headache, heartburn, loss of appetite, lowness of spirits, nausea, pain in the side and shoulder, piles, unpleasant dreams, yellowness of the skin and eyes etc. 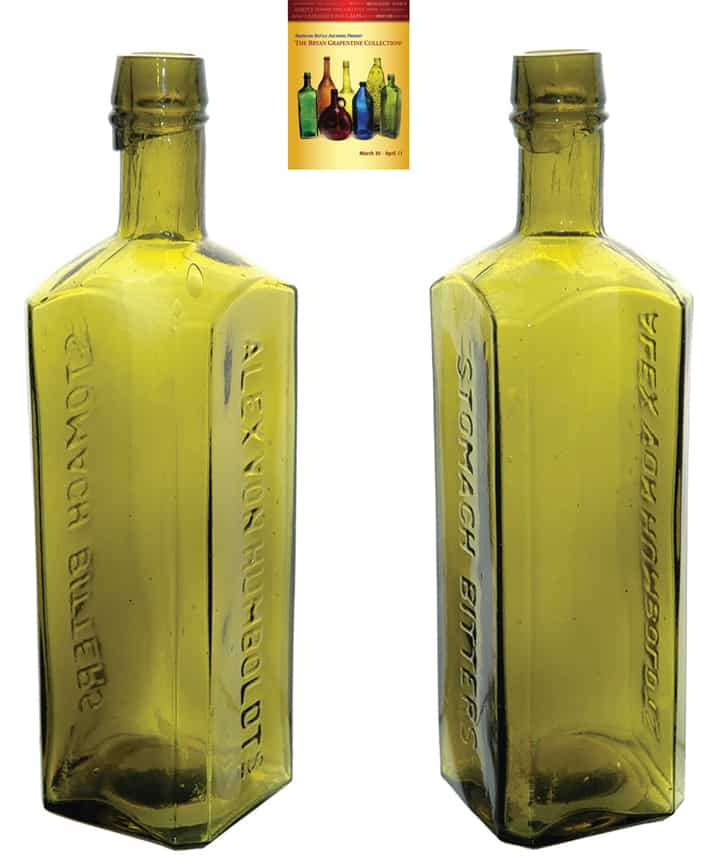 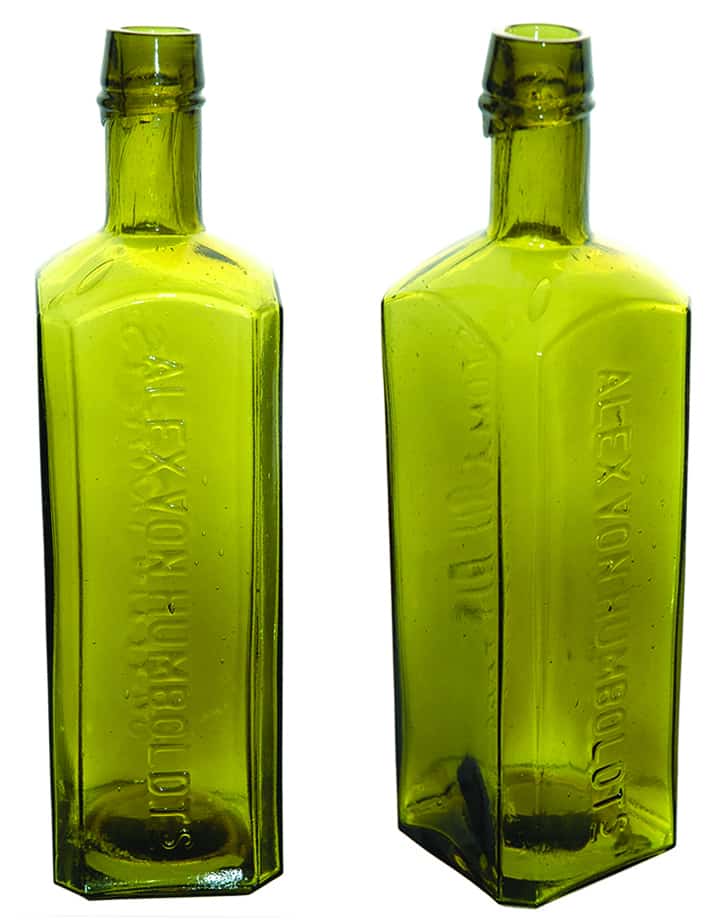 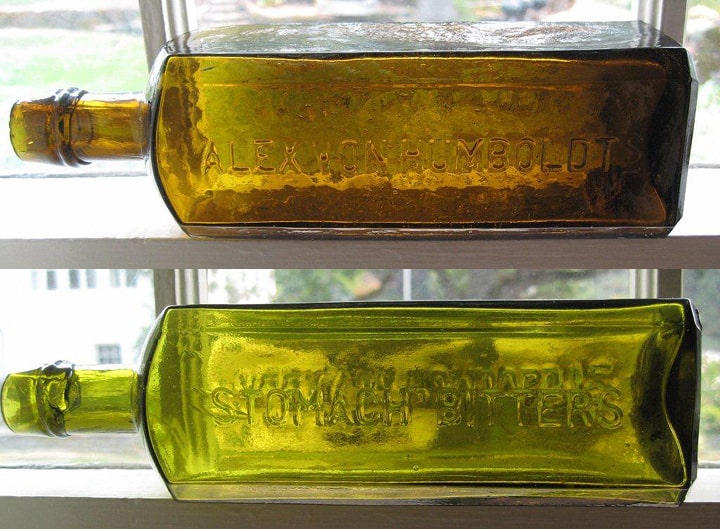 So who is Alex Von Humboldt? 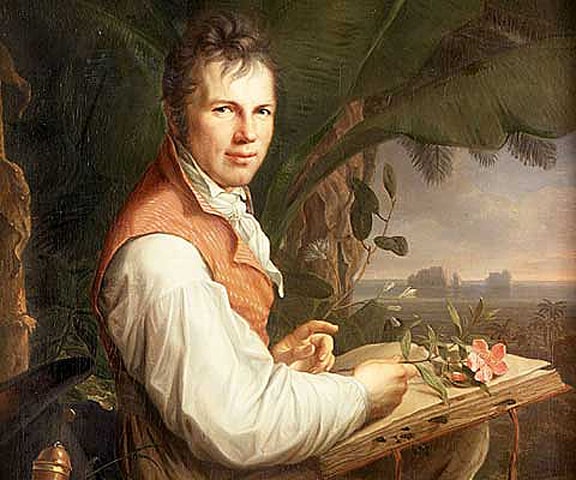 A portrait of Humboldt by Friedrich Georg Weitsch, 1806

Well I think many of you might be aware of Alexander Von Humboldt from History class but I thought Roger Terry summed it up rather nicely over at Western Bitters News:

“Alexander von Humboldt was the reigning scientific mind of the early nineteenth century, a unique combination of naturalist and adventurer. With his companion, Aime Bonpland, Humboldt cut a six thousand mile swath across the New World, through what is now Venezuela, Columbia, Ecuador, Peru, Mexico, and Cuba. Risking his life in treacherous terrain, he conducted the first extensive scientific explorations of the Andes and the Amazon, literally redrawing the map of the Americas and dramatically expanding our knowledge of the natural world. He brought back to Europe more than 60,000 plant specimens and a multitude of exotic New World animals, set an altitude record while climbing the volcano Chimborazo, made revolutionary discoveries regarding volcanoes and the Earth’s magnetic field, and introduced millions of Americans and Europeans to the astonishing cultures of the Aztecs and the Incas.

At the completion of his epic journey, Humboldt became one of the most celebrated men in the world, feted by Thomas Jefferson in Washington and invited to Napoleon’s coronation in Paris. His ideas revolutionized scientific research, laid the ground work for entire new fields of study, such as climatology, oceanography, and several branch’s of geography. His adventures profoundly influenced followers and students such as Charles Darwin. Today, more places and geographical features are named after Humboldt than any other historical figure, and scientists continue to build on the foundations he established.” – Gerard Helferich

Alex von Humboldt, incredible traveler, author, and father figure of science, was perhaps the most admired man of the 19th century. Fourteen towns in the United States and one in Canada are named for him. Mountains in Antarctica, North and South America, Australia, New Zealand. An ocean current off of Peru, the largest glacier in Greenland. A bay, a county, a university, a redwood forest in California. Streams, parks, city streets, even a “sea” on the moon carry his name.

The map of Northern Nevada is covered with Humboldts name; the county, a town, a canyon, a mountain range, a huge national forest. Most of the California and Nevada naming was due to the little “Pathfinder”. John C. Fremont. Fremont was an ardent Humboldt admirer, naming the river that marked the westward expansion and later the gold rush trail.

Fremont’s diary – Nov. 8th, 1845. “Crane’s Branch led into a larger stream that was one of the two forks forming a river to which I gave the name of Humboldt. I am given by Himself the honor of being the first to place his great name on the map of the continent. Both the river and mountain to which I gave his name are conspicuous; the river stretching across the Basin to the foot of the Sierra Nevada.”

Ferdinand Meyer V is a native of Baltimore, Maryland and has a BFA in Fine Art and Graphic Design from the Kansas City Art Institute and School of Design. Ferdinand is the founding Principal of FMG Design, a nationally recognized design consultation firm. Ferdinand is a passionate collector of American historical glass specializing in bitters bottles, color runs and related classic figural bottles. He is married to Elizabeth Jane Meyer and lives in Houston, Texas with their daughter and three wonderful grandchildren. The Meyers are also very involved in Quarter Horses, antiques and early United States postage stamps. Ferdinand is the past 6-year President of the Federation of Historical Bottle Collectors and is one of the founding members of the FOHBC Virtual Museum.
View all posts by Ferdinand Meyer V →
This entry was posted in Bitters, Bottle Shows, Collectors & Collections, History and tagged Alex Von Humboldts, Alexander von Humboldt, bitters, Coco, Dale Mlasko, Downieville, extraordinary, Ferdinand Meyer V, Hazlett & Miller, Roger Terry, Weimeraner. Bookmark the permalink.