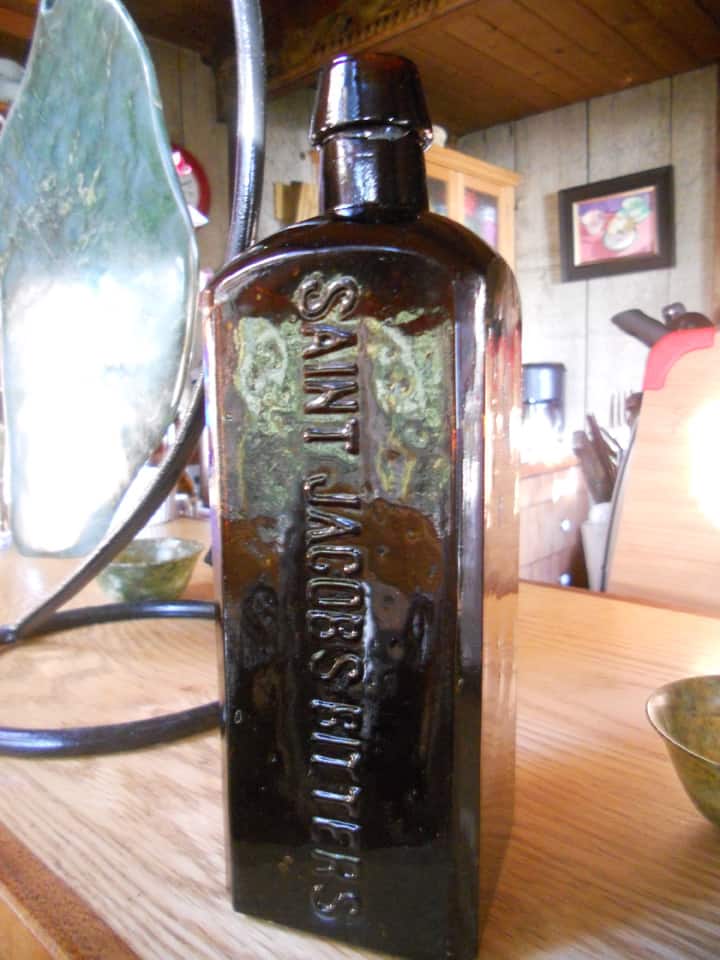 My friend and bottle show table mate Jerry Forbes (Big Sur, California) scored a nice, whittled, Saint Jacob’s Bitters at the FOHBC 2013 Manchester National a couple of weekends ago. The bottle is pictured at the top 0f the post. I kind of wish I picked it up myself as it was quite an example. 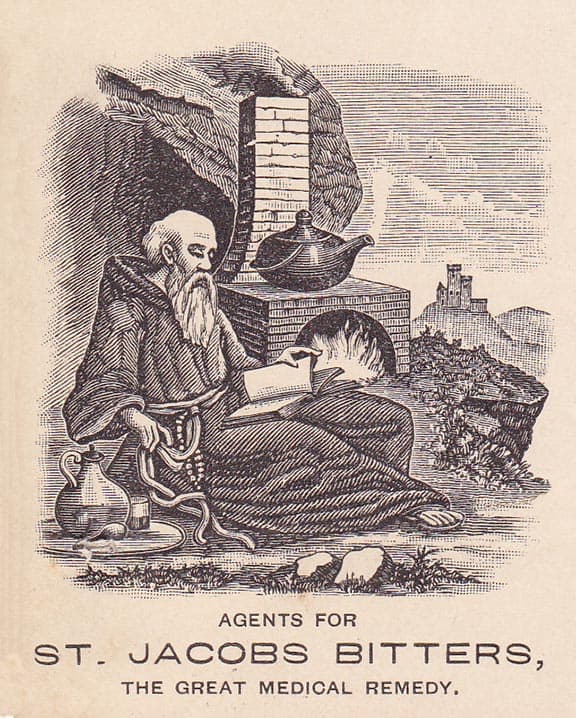 The bottle listing in Ring and Ham says amber examples are known, but as you can see from Jerry’s example and mine below, you can get some variance in the color range.
The listing in Bitters Bottles Supplement 2 will be updated: 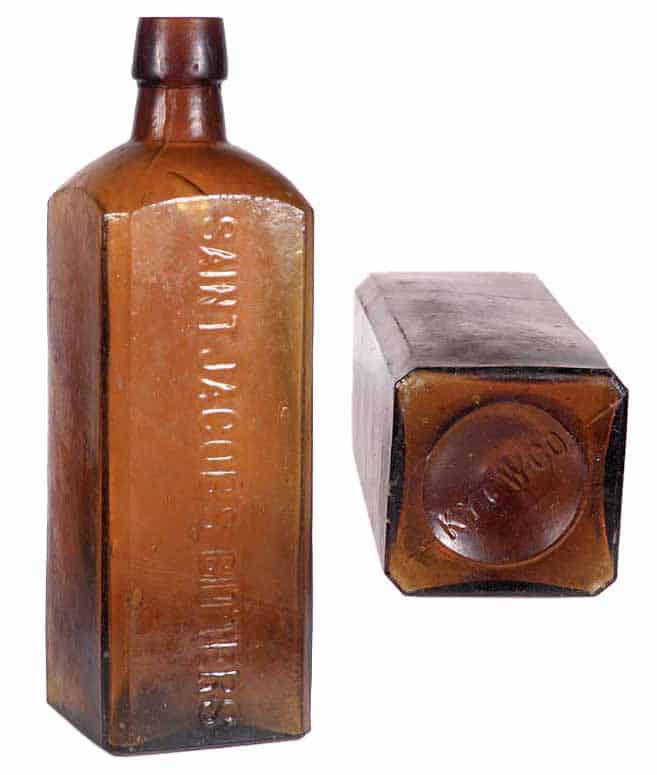 There is very little information about this bitters bottle. It’s from the St. Jacob’s Bitters Co. Cincinnati, Ohio. This bitters was trademarked in December of 1882. The photo below of this square amber SAINT JACOB’S BITTERS is a unlisted variant. The bottle has an unmarked base and is not embossed with KYGW Co. or MC C.

There is also another St. Jacob’s Bitters from St. Louis, Missouri put out by Julius Falke. For now, I do not see a relationship.

Here is a cool advertisement below for the Celebrated Saint Jacob’s Bitters made by the Saint Jacob’s Bitters Company, Cincinnati from the Carlisle Evening Herald on November 27, 1894. Very late. Hard to tell if this bottle was embossed but it sure takes on the bottle shape of the subject bottles. 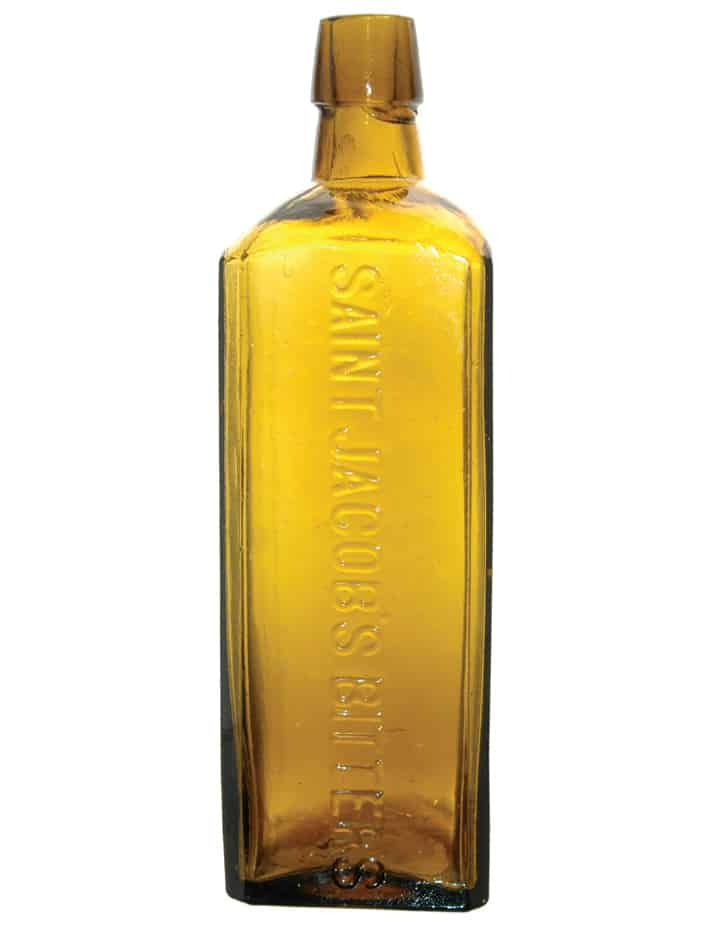 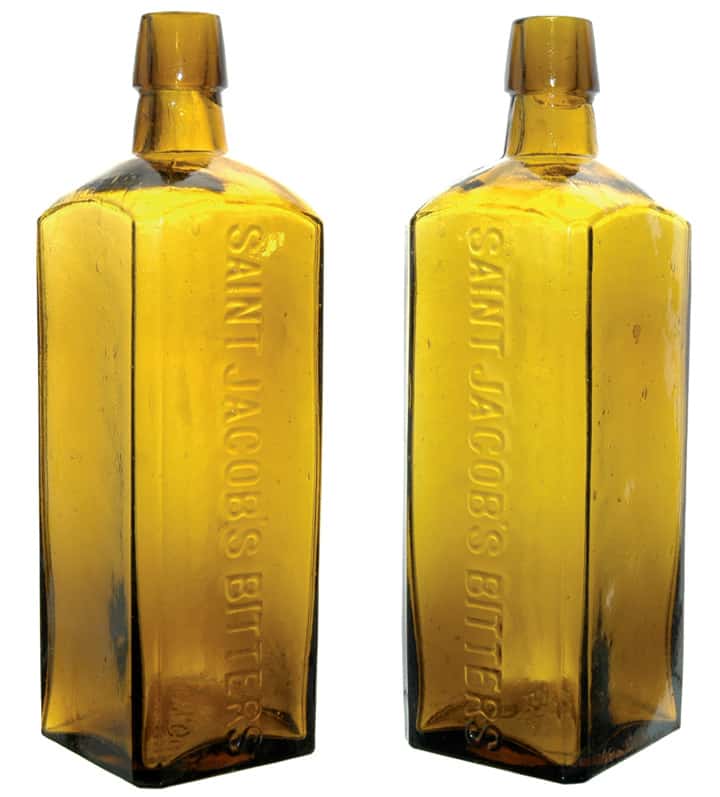 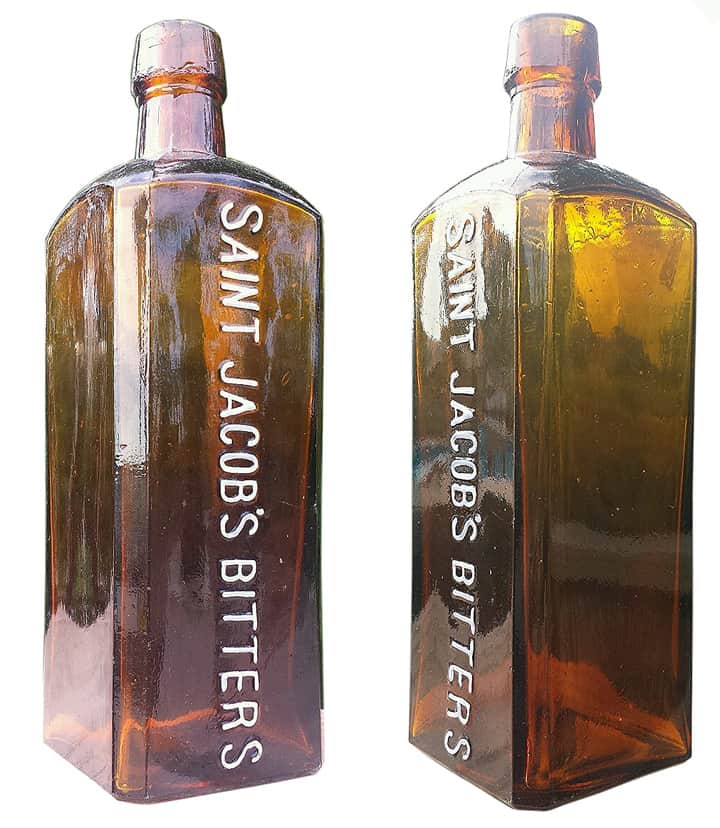 [Wikipedia] Jacob of Nisibis, died c. AD 338, is a Syriac saint. He was the second bishop of Nisibis,spiritual father of the renowned Syriac writer Ephrem the Syrian, and celebrated ascetic. Jacob was appointed bishop, in 308, of the Christian community of Nisibis in Mesopotamia (modern Nusaybin, located near the Turkey/Syria border). Jacob of Nisibis, also known as James of Nisibis and as Jacob of Nusaybin, is recorded as a signatory at the First Council of Nicaea in 325. He was the first Christian to search for the Ark of Noah, which he claimed to find a piece of on a mountain, Mount Judi (Turkish Cudi Dağı), 70 miles (110 km) from Nisibis.

He founded the basilica and theological School of Nisibis after the model of the school of Diodorus of Tarsus in Antioch. It was not until the 10th century that the “Persian Sage” who had been incorrectly identified with Jacob of Nisibis was finally identified with Aphrahat. Jacob was the teacher and spiritual director of Saint Ephrem the Syrian, a great ascetic, teacher and hymn writer who combatted Arianism.

Much of Jacob’s public ministry, like that of other Syrian ascetics, can be seen as socially cohensive in the context of the Late Roman East. In the face of the withdrawal of wealthy landowners to the large cities, holy men such as Jacob acted as impartial and necessary arbiters in disputes between peasant farmers and within the smaller towns.

Saint Jacob of Nisibis’s relics are in the church he founded in Nisibis. He is commemorated in the Coptic Synaxarion on the 18th day of Month of Tobi (usually 26 January). In the Roman Catholic Church he is commemorated on 15 July.

Mihalovitch, Fletcher & Co. ran a large distilling and liquor business in Cincinnati, Ohio from about 1883 to 1918. They specialized in Fruit Brandies. The partners in 1890 were Morris Mihalovitch, Victor Fletcher and Bernie Mihalovitch. Morris established himself in 1874 in Cincinnati.

In 1884, they were advertising a St. Jacob’s Bitters, primarily in New Orleans.

This Mihalovitch, Fletcher & Co. 1890 letterhead below, from the Joe Gourd collection, notes both the Fletcher’s Bitters and St. Jacob’s Bitters. The second letterhead is also from Joe’s collection.

1884: Newspaper advertisement (below) Ahead of All Competitors, St. Jacobs Bitters, This Tonic has no Equal, Mihalovitch, Fletcher & Co., Cincinnati, O. – The Times Picayune, Saturday, October 4, 1884

1884: Newspaper notice (below) B. Mihalovitch of Mihalovitch, Fletcher & Co., proprietors of the St. Jacob’s Bitters in town – The Times Picayune, Thursday, November 20, 1884

Ferdinand Meyer V is a native of Baltimore, Maryland and has a BFA in Fine Art and Graphic Design from the Kansas City Art Institute and School of Design. Ferdinand is the founding Principal of FMG Design, a nationally recognized design consultation firm. Ferdinand is a passionate collector of American historical glass specializing in bitters bottles, color runs and related classic figural bottles. He is married to Elizabeth Jane Meyer and lives in Houston, Texas with their daughter and three wonderful grandchildren. The Meyers are also very involved in Quarter Horses, antiques and early United States postage stamps. Ferdinand is the past 6-year President of the Federation of Historical Bottle Collectors and is one of the founding members of the FOHBC Virtual Museum.
View all posts by Ferdinand Meyer V →
This entry was posted in Bitters, Collectors & Collections, History, Tonics and tagged Cincinnati, Falke, H. Grossman & Co., Jacob of Nisibis, Jerry Forbes, Kentucky Glass Works, KYGW CO, ohio, Saint Jacob's Bitters. Bookmark the permalink.