The Alabama Bottle Collectors’ annual show was another huge success with 100 paid Dealer tables. In addition, we had 36 Early Buyers during Friday afternoon’s setup period. At the FREE pizza buffet for Dealer and Early Buyers Friday evening, over 125 people were served. General admission on Saturday topped 500 as estimated by several dealers. Local collector and general antiques dealer Reggie Swiney said “I had a great show…the public was there to buy.” Reggie also suggested that we charge admission but our club feels strongly that we should maintain our “FREE Admission” policy.

When asked about the show’s highlights, Tom Lines, the (permanent) Show Chairman, said “This was the year of firsts…the 1st year with 100 paid tables, the 1st year with zero cancellations or no-shows and the 1st year I had a volunteer handle Early Buyer registration…Thank You Steve Holland!!!” Asked if the Manchester Show the previous weekend impacted the Birmingham Show, Lines remarked “We had 3 dealers that attended our show last year that didn’t return because they went to Manchester. But we had 3 other dealers that did both shows despite being over 1,200 miles apart. Plus we had 13 new dealers that set up for the first time this year. So bottom line, there was little to no effect.”

As for the merchandise offered for sale, the general consensus was there were plenty of things for everyone to buy. Mississippi bottle and antiques dealer Alan Balliet said he acquired 50 bottles and flasks for re-sale at the many antique shows he attends. And good sales were reported by a number of dealers. Tampa, Florida’s Charlie Livingston said it was his best show all year. Tom Lines lamented missing a small Sandwich smelling salts bottle in a greenish canary yellow, an exceptional color for a smelling salts! Several museum quality pieces of Alabama folk pottery were offered by Tommy Burke including 3-4 decorated Sand Mountain churns and bean pots.
North Carolina’s Tim Adams came for the first time along with traveling companion Vern Huffstetler from South Carolina with each reporting excellent sales. Not being avid pizza fans, Tim and Vern found The Bright Star, a nationally renowned Greek restaurant in downtown Bessemer for their real meal. When asked about it the next morning, Tim said “Even if I didn’t sell anything next year, I’d come back just to eat at The Bright Star”. Georgia’s Tom and Mabel Hicks are also Bright Star fans as is New Orleans’ Jim Corvin. But, hey, the pizzas were good too!

Our 2 club displays this year featured Alabama mineral waters in one lighted showcase and a selection of Marion County’s Rye Pottery in the other case. Collectors were solicited prior to the show to bring a piece or two from their collections to place in the respective displays. Even though one collector slated to bring several unique mineral water bottles fell ill several days before the show and was unable to attend, the display still boasted 3 more unique mineral waters including an iron pontiled Talladega Sulphur Springs, a Baileys Mineral Springs from Florence and a Hydrostill from Birmingham plus a great selection of other known bottles. The Rye pottery display also had some bang-up examples of Jimmie Rye’s pieces. 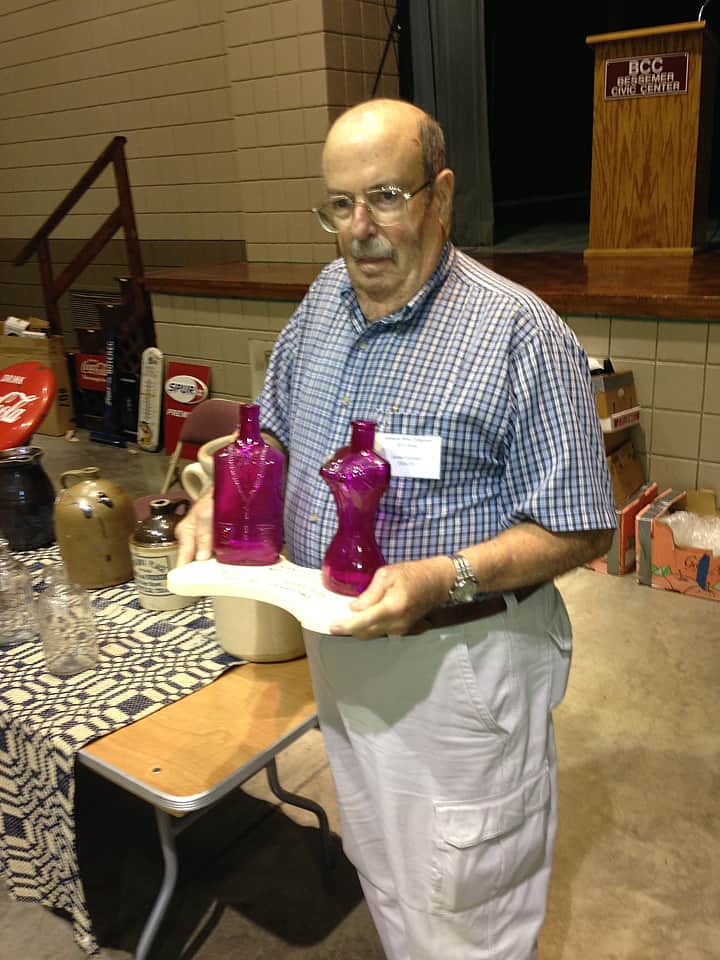 James Cormany, winner of this year’s free dealer table, holding the (not-so-coveted) “Ugliest Trophy Ever” that has to be displayed on his table during show hours.

An annual highlight at the show has always been a drawing just for dealers to win a free sales table, actually to be reimbursed for one table. The only catch is that they have to display what’s been dubbed as the “Ugliest Trophy Ever” on their table throughout the duration of the show. This year’s winner was local collector and dealer James Cormany, also a Rye pottery expert having authored the only work ever written on the history of the Rye family.

Looking into 2014, the show date will be Saturday, July 26th with setup on Friday, the 25th. Historically, the club holds their show the 4th Saturday of July each year. And, again, the 2014 FOHBC National Antique Bottle Show at Lexington, KY will be within a week but this time, the Birmingham Show precedes the national show. Please mark your calendars now!

Ferdinand Meyer V is a native of Baltimore, Maryland and has a BFA in Fine Art and Graphic Design from the Kansas City Art Institute and School of Design. Ferdinand is the founding Principal of FMG Design, a nationally recognized design consultation firm. Ferdinand is a passionate collector of American historical glass specializing in bitters bottles, color runs and related classic figural bottles. He is married to Elizabeth Jane Meyer and lives in Houston, Texas with their daughter and three wonderful grandchildren. The Meyers are also very involved in Quarter Horses, antiques and early United States postage stamps. Ferdinand is the past 6-year President of the Federation of Historical Bottle Collectors and is one of the founding members of the FOHBC Virtual Museum.
View all posts by Ferdinand Meyer V →
This entry was posted in Bottle Shows, Club News, News and tagged Birmingham, James Cormany, Tom Lines. Bookmark the permalink.