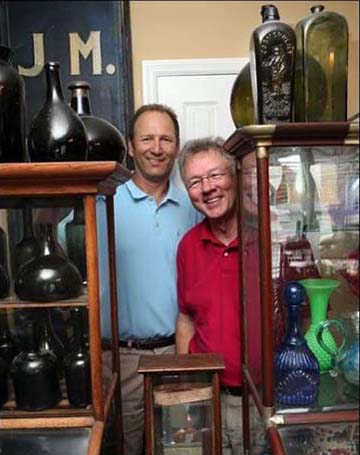 On June 8, 2013 the 43rd Annual Atlanta Antique Bottle Show was held in Smyrna, Georgia, just 15 minutes north of Atlanta. There were 80+ sales tables and Jim Sanders, long time Atlanta collector, displayed what is probably the largest collection of Atlanta bottles ever assembled. Howard Pousner writer and Phil Skinner photographer for the Atlanta Journal and Constitution, came by my house and interviewed co-show chairman John Joiner and myself, a couple of weeks before the show. The result was a 2-page article that appeared on the 6th of June in both the Atlanta Journal and Constitution print addition as well as the online addition about the show and bottle collecting in general. We had no idea how the article would affect our show. Read Article

We were overwhelmed with the positive response, we had over 40 early admissions and a steady flow of public all day, many of which had never been to, or heard of, a bottle show in their life. The final tally was over 400 thru the door.

One gentleman brought in a Canadian Mist bottle that I believe he may have finished the night before the show.

We offered free appraisals and approximately 75 people came thru the doors with bottles in tow. Among the bottles we appraised were the usual suspects including a very pretty, light cobalt blue, Phillips Milk of Magnesia, a sample Listerine from the early 1900s, an olive Bitterquil, mason jars, etc. One gentleman brought in a Canadian Mist bottle that I believe he may have finished the night before the show. I told him the kiss of death in old bottles being valuable is usually a screw top, though there are exceptions to every rule (I thought of some really nice screw top label under glass bottles). Then his next bottle was a Coke bottle with a bar code on the side of it. I think it may have been used as a mixer for the Canadian Mist, I had told him earlier that there were always exceptions, but I could not think of an empty bottle with a bar code that might be valuable.

When he came back to get his prized bottles his ex-wife told him she had sold them at a yard sale for a little of nothing.

The very next person to pull out a bottle for appraisal was a lady in her 80’s who pulled out a really nice, amber, Kelly’s Old Cabin Bitters, and then she pulled out a green Flaccus Brothers fruit jar. When I told her the Kelly’s was a $2,000 bottle, she and her daughter both were excited and shocked. For the first time in my life I felt like one of the Keno Brothers on the Antiques Road Show. Another couple brought in four figural bitters, a Plantation, a Fish, an Old Homestead, and an ear of corn, all amber but they were mint. They had an interesting story. The lady said her parents had gone thru a divorce several years ago and her father had left the bottles in the house when he left. When he came back to get his prized bottles his ex-wife told him she had sold them at a yard sale for a little of nothing. Her father passed away a few years later thinking someone had bought his bottles at a yard sale but after her mother had died they were cleaning out her house and they found his prized bottles tightly wrapped up safe and sound in her mothers sock drawer. She was excited when we told her what the bottles were worth.

I threw them in the back of my truck before the show and we gave a bottle to all the children who came to the show.

It was also nice meeting Larry and Beth Schubach. Beth has been collecting bottles since she was a little girl and had no idea that bottle shows existed until she read about it in the newspaper. She said she had a great time and wanted to know when the next one was, because she couldn’t wait. I had a few boxes of miscellaneous bottles that I had from a collection I bought that had been in my garage for sometime. I threw them in the back of my truck before the show and we gave a bottle to all the children who came to the show. We gave away about 50 bottles to the kids and I still had a couple of boxes left. I told Beth if she would like the rest of them after the show closed she was welcome to them. I just received a note thanking me for them.

All the dealers at the show that I was able to talk to said they had a great show, and they could not get over how many people came to the show. The newspaper article really was a boost. I received several thank you cards and emails from dealers who said it was the best show they had ever done. As always the BBQ lunch catered by Low Country BBQ was a big hit.

Perry Driver came up from Florida and said he had a great show and couldn’t wait until next year. We had some first time dealers like Roscoe Googe who was recently inducted into the state of Georgia High School Sports Hall of Fame (he was a long time track coach at Marietta High School). He has been collecting soda bottles for several years and has attended the show as a buyer for a several years but because of his schedule he could not set up. Now that he is retired, he was able to get a sales table this year.

Shelby West, who is a folk potter from north Georgia, and has been a featured artist at the “folkfest” folk art show in Atlanta..

Shelby West, who is a folk potter from north Georgia, and has been a featured artist at the “folkfest” folk art show in Atlanta, set up with some of his pieces including a few face jugs that he is known for. Jim Scharnagel from Gainesville, Georgia and Tom and Mabel Hicks from Eatonton, Georgia set up with their usual selection of quality bottles and pottery. Tom Lines and James Smith came over from Birmingham and also had some nice things. Vic Svenson had some of his recent findings from a dig in Charleston. Ed Provine was able to come over from Memphis this year after a couple years having scheduling conflicts.

Mike Newman came over from Augusta as an early buyer to try and add to his wonderful collection. Bill Peek was not able to set-up this year but did come over early and as always found some things he could use.

A few people got a chance to see a cobalt blue, Duffy’s Crescent Saloon figural pig that was recently was purchased.

As always, some of the dealers and attendees brought some recently acquired additions to their collections for show and tell. A few people got a chance to see a cobalt blue, Duffy’s Crescent Saloon figural pig that was recently was purchased. Read: Figural Pig Series | Duffy Crescent Saloon Figural Pig Bottle 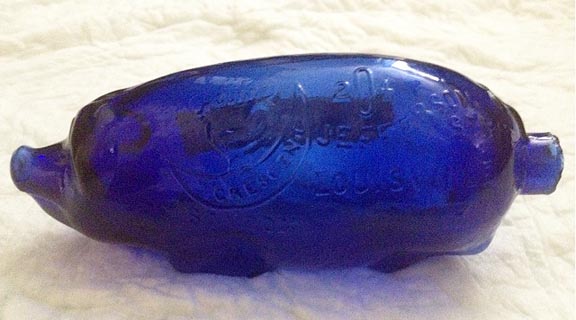 Going to shows is always fun. You often times, see people only once a year, as they may only attend that particular show. On a sad note, I found out that Steve Johnson, who has been a staple at the Atlanta and other southern shows over the years, passed away April 4, 2013. His southern drawl and overalls will certainly be missed. Our thoughts and prayers go out to his family. Also, Wanda Lee, the wife of long time collector and new Federation member James Lee, from Flovila, Georgia died on April 23, 2013. Talking to James at the show and later on the phone helped me appreciate how supportive our loved ones are, what they mean to us, and how they are missed when they are gone. Again our prayers and thoughts go out to those who have lost loved ones.

Venues for the 2015 National Antique Bottle Show in Chattanooga, Tennessee

All in all, everyone had a great time and said they couldn’t wait until next year. And when we told them we would not be having a show in 2015; because we would be hosting the FOHBC 2015 National Antique Bottle Show in Chattanooga, Tennessee, they couldn’t wait to sign up. This also helped renew interest in reestablishing the Atlanta Antique Bottle Club after a several year hiatus. We are in the final stages of securing a location to meet in Lawrenceville, Georgia, as soon as we finalize the location and meeting nights we will let everyone know.

Those of you who attended the show as a vendor, early admission or regular attendee, we would like to thank you and hope to see you next year in Smyrna on the 14th of July 2014. 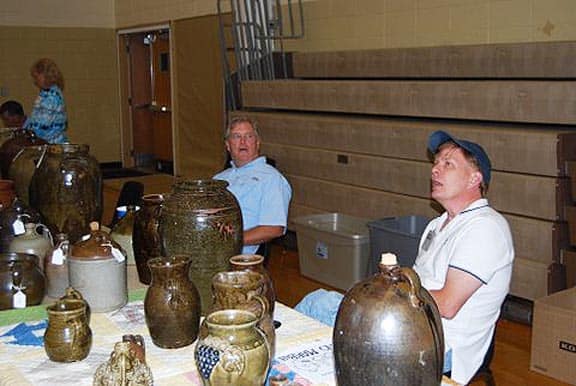 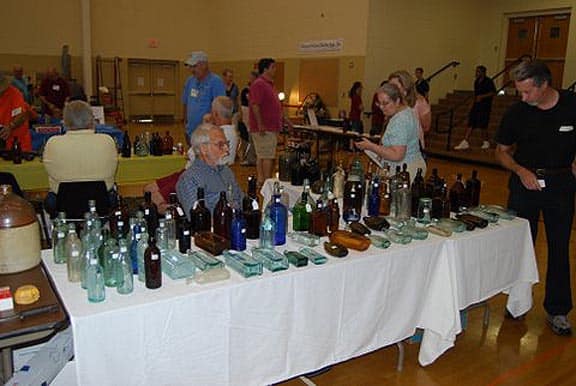 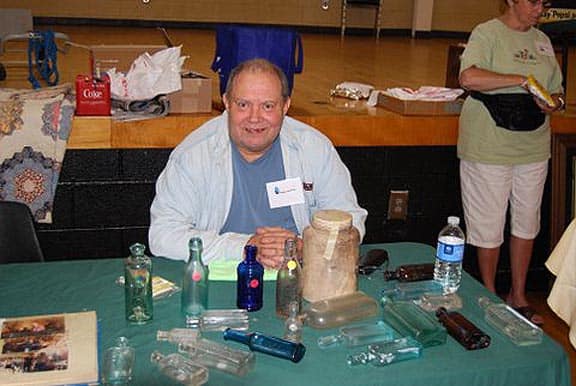 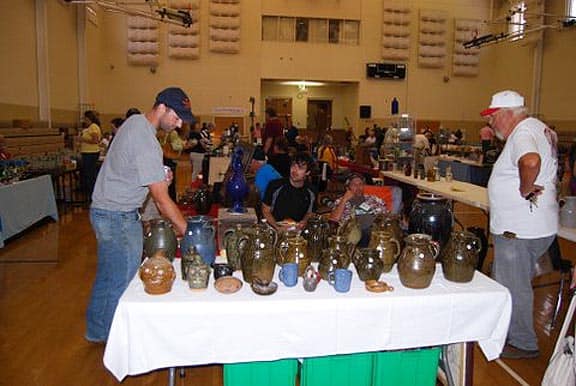 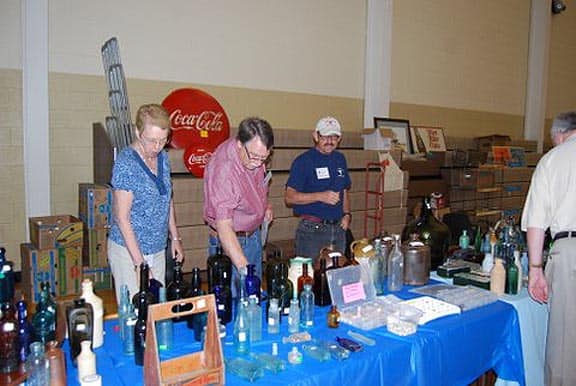 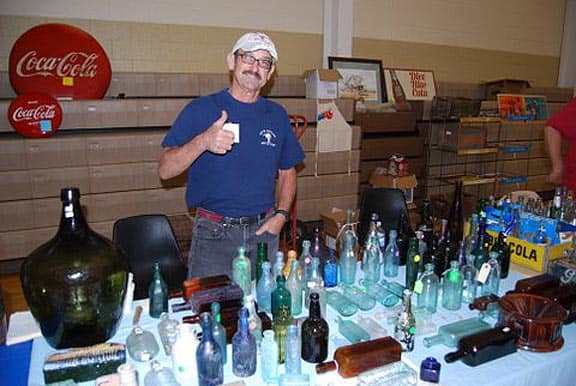 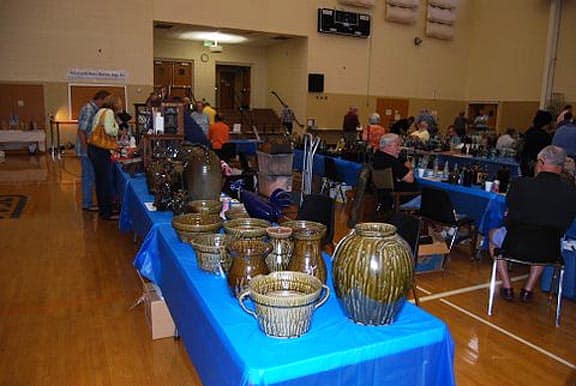 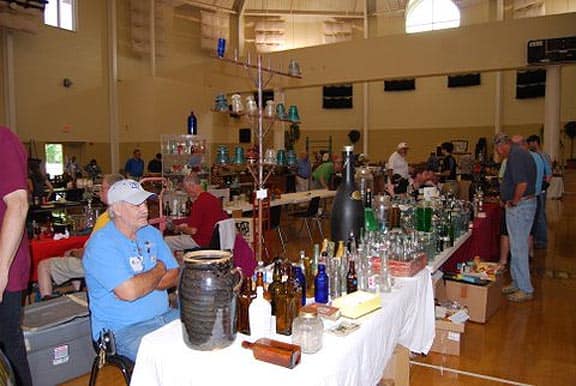 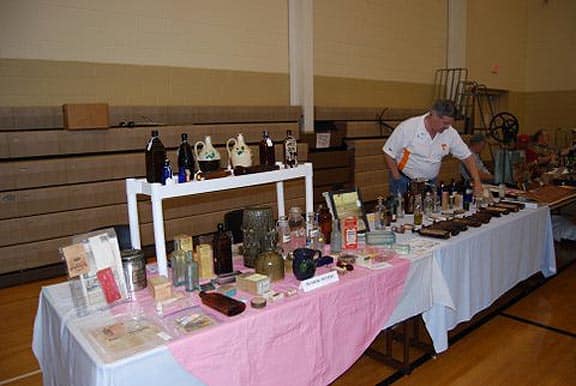 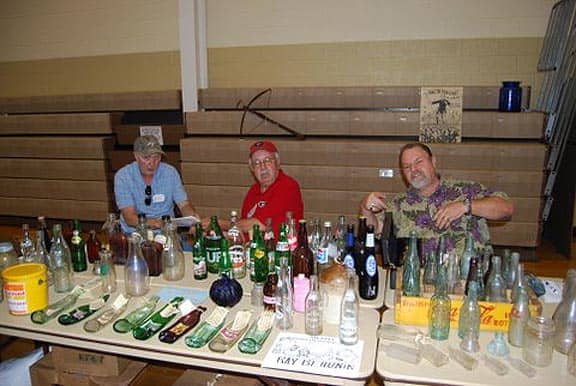 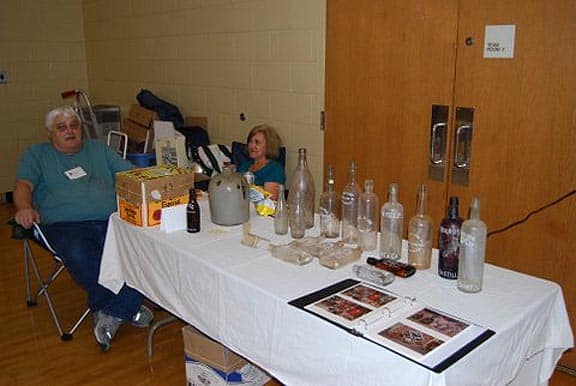 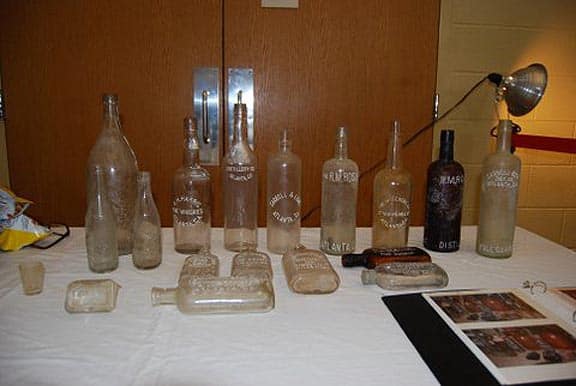 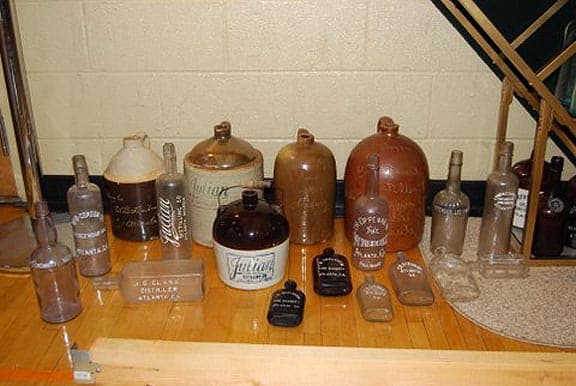 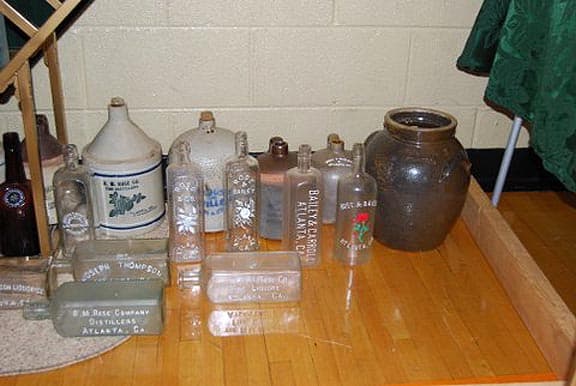 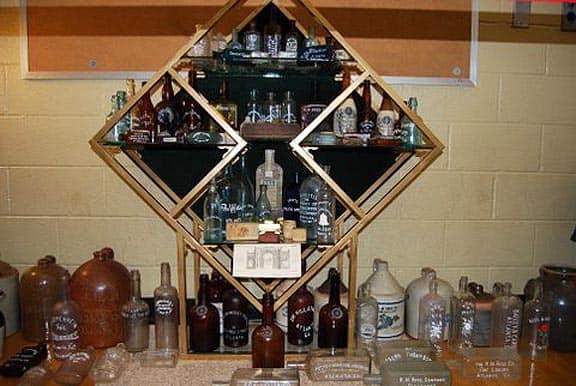 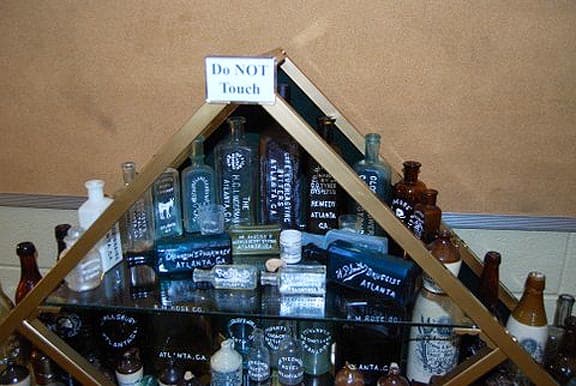 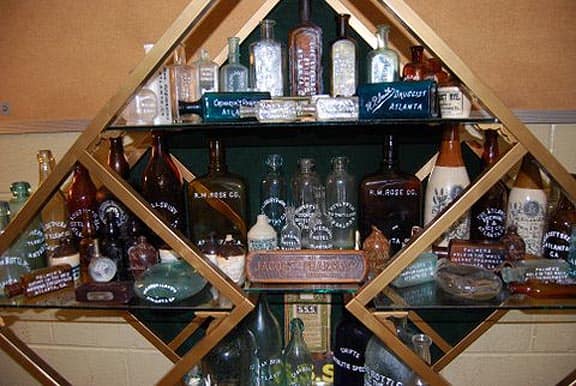 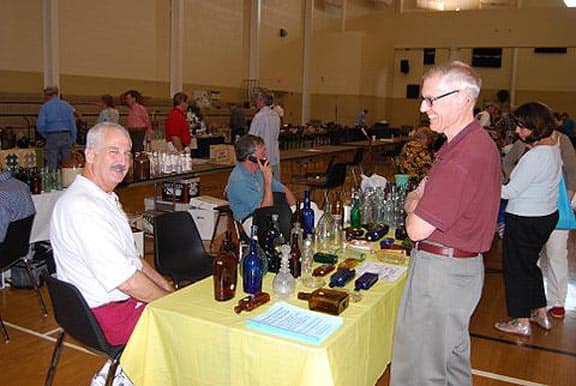 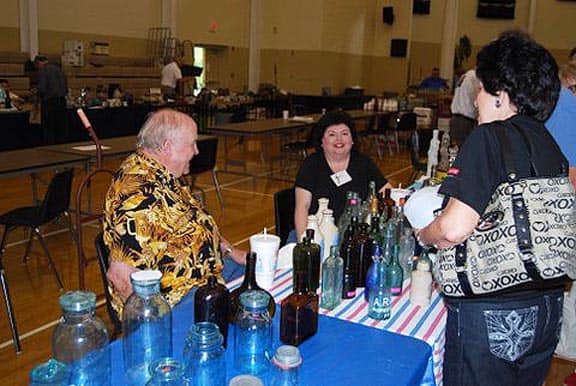 Tom and Mabel Hicks talking to a customer 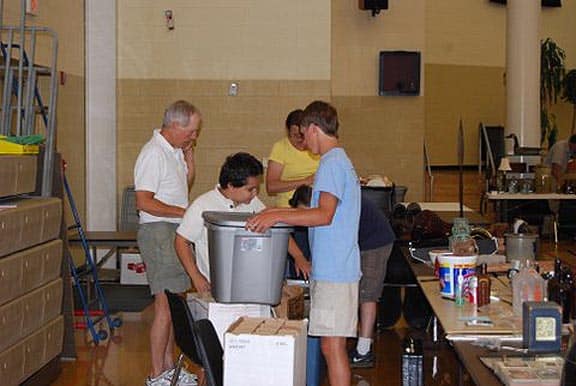