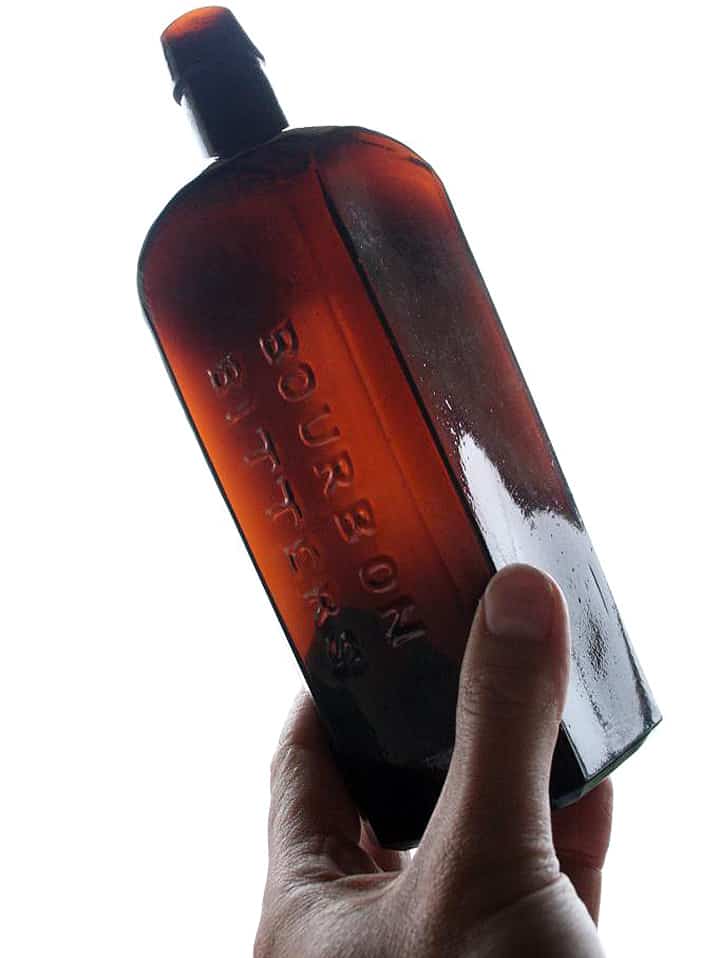 Up for bid (see top picture) is a real nice slightly tapered square here folks, these Swain’s Bourbon Bitters for some odd reason tapper in 1/8 inch at the base sort of like a case gin. Color is king when it comes to bottles, and this one has it. Usually found in a common amber coloration I have never seen either of the two variants of this great Chicago bottle in such a deep dark tobacco color, its bordering on puce. I’m betting if you have a run of Swain’s you do not have this one. Embossed on two opposite panels “C. H. SWAIN’S” – BOURBON – BITTERS”, this is the two panel and not three panel variant. Excellent likely dug condition, and possibly professionally cleaned. No issues. Please see the pictures. The bottle sits a bit crooked, maybe it absorbed some of the contents?! B.I.M.A.L. 1860’s – 70’s. Stands 9″ 1/8 tall. – freshdiggz (100% Positive Feedback) See ebay Listing 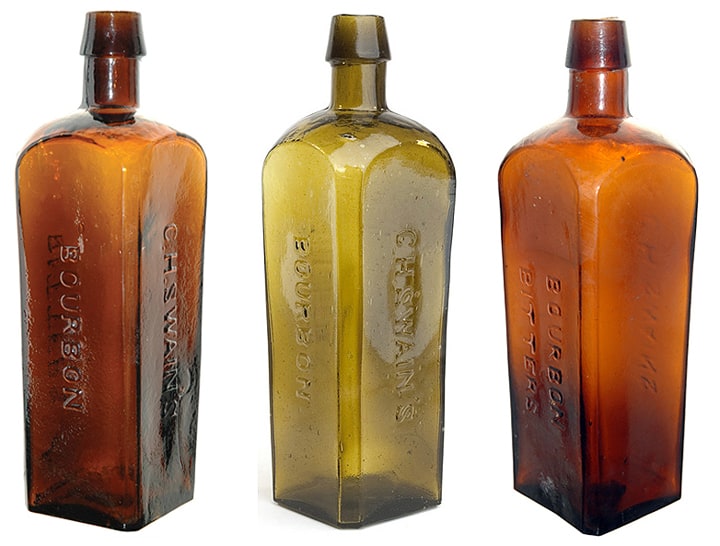 I have posted about the Swain’s Bourbon Bitters before as I have two examples myself in the collection. I like this new ebay example for its color, crudity and form. These are great squares. Look at the dollar amount on ebay. Try to tell me there isn’t a healthy Bitters market out there.

The town council are hereby expressly and forever prohibited from granting license to and person or persons in said town of Odell, to sell, traffic exchange, barter or give away any strong beer, ale, lager beer, wine, rum, gin, brandy, whisky, or intoxicating liquors, drinks or beverages of any kind whatever including Hostetter’s stomach bitters, Plantation bitters, Roback’s Bitters, Red Jacket Biters, Swain’s Bourbon bitters, or any other bitters, of whatsoever name or kind. Containing intoxicating liquors.

A healthy tonic, gentle stimulant and unequalled morning appetizer. Prepared in ripe old bourbon whiskey. Free from grain oil, with flowers, buds and barks of the highest medicinal value. By increasing the appetite, assisting digestion, regulating bowels, and giving tone to the system, they impart strength to the body and cheerfulness to the mind.

Dr. C. H. Swain was the proprietor and manufacturer of his Bourbon Bitters. He was located at 34 South Water Street, Chicago, Illinois. He also had a branch office located at 375 Broadway Street, New York City. An advertisement claimed that his medicine was a healthy tonic gentle stimulant. Posted below is an advertisement from 1864. (above by Frank Wicker at Bottle Pickers. 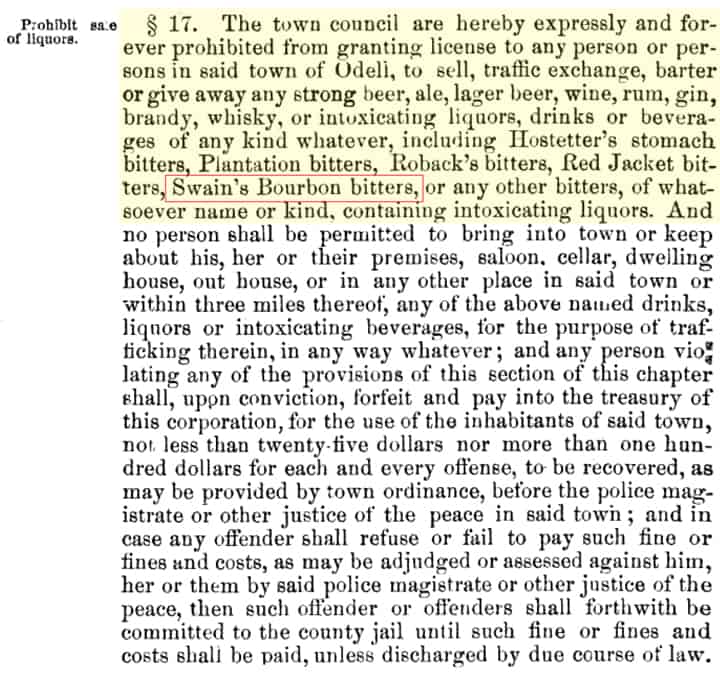 Swain’s Bourbon Bitters noted in Laws of the State of Illinois, Volume 26 – 1869

Ferdinand Meyer V is a native of Baltimore, Maryland and has a BFA in Fine Art and Graphic Design from the Kansas City Art Institute and School of Design. Ferdinand is the founding Principal of FMG Design, a nationally recognized design consultation firm. Ferdinand is a passionate collector of American historical glass specializing in bitters bottles, color runs and related classic figural bottles. He is married to Elizabeth Jane Meyer and lives in Houston, Texas with their daughter and three wonderful grandchildren. The Meyers are also very involved in Quarter Horses, antiques and early United States postage stamps. Ferdinand is the past 6-year President of the Federation of Historical Bottle Collectors and is one of the founding members of the FOHBC Virtual Museum.
View all posts by Ferdinand Meyer V →
This entry was posted in Advertising, Bitters, Bourbon, eBay, Liquor Merchant, Spirits and tagged chicago, Dr. C. H. Swain, eBay, illinois, Swain's Bourbon Bitters. Bookmark the permalink.