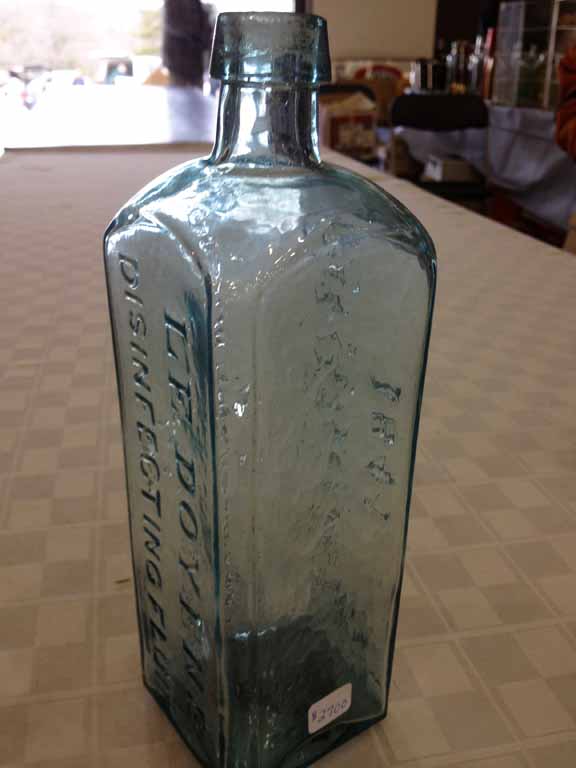 I say the “last bottle” because this is the last bottle I photographed as I left the floor of the 2013 Baltimore Bottle Show. Since I was repacking my bottles without my wife Elizabeth for shipment back to Houston, I was taking my time and carefully wrapping each bottle in bubble wrap and fitting them in compartments in my large China Barrel shipping box. I had the unfortune of having four bottles break in the shipment up to Baltimore with FedEx so I was taking my dog-gone time. 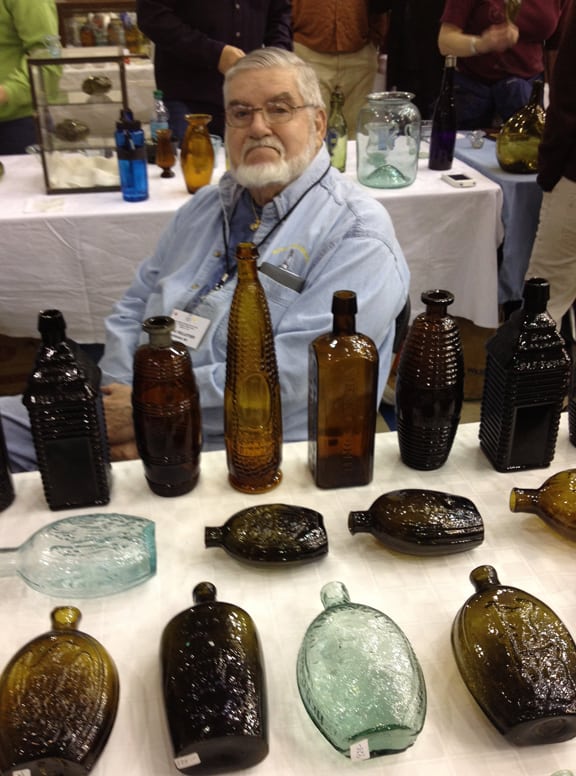 As the clean-up crews were putting up chairs and tables, and the last dealers were packing up, Jack Pelletier (Gorham, ME) reminded me that he had this great ice blue bottle that I had seen and admired earlier in the day. This would be my last chance to photograph it. Jack thought is was a ‘one of a kind’ known example of a LE DOYEN’S DISINFECTING FLUID. A killer bottle I thought when I first inspected it earlier in the day. It looked like it was carved from ice by an expert chisel-man. And oh what a pontil. It kind of reminded me of my Boggs Cottman German Tonic Bitters (from Baltimore) and my Dr. Plannett’s Bitters. Very similar size, color and iron pontil. You will also notice a similarity to a Dr. Townsend’s too. 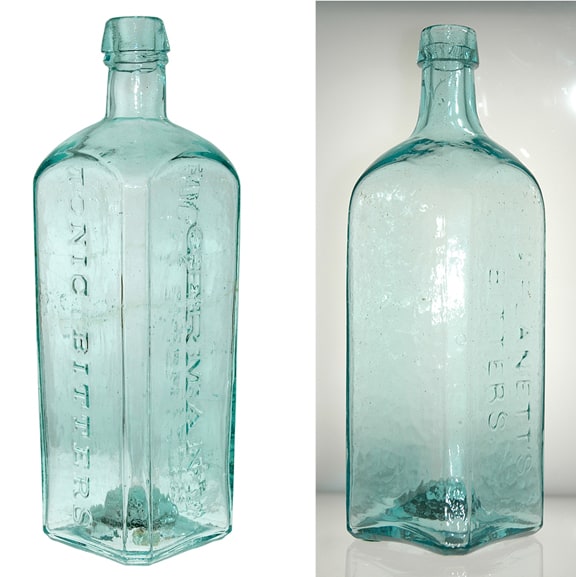 The three panels of the bottle are embossed LE DOYENS / DISINFECTING FLUID // BY / POULIN ROGERS & KEENEY / N.Y. // PATENTED OCT 8 / 1844. There seems to be quite a bit of historical material on the brand which is surprising since it is such an early bottle. 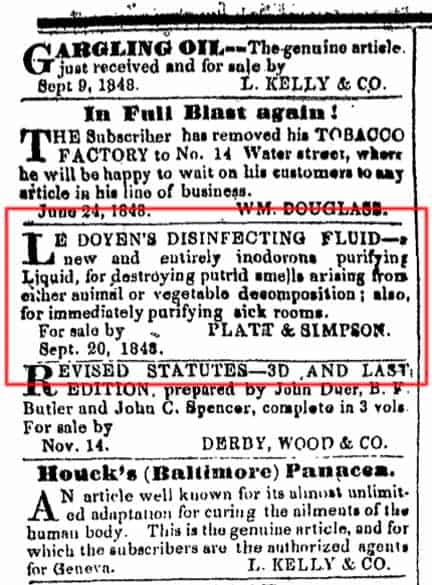 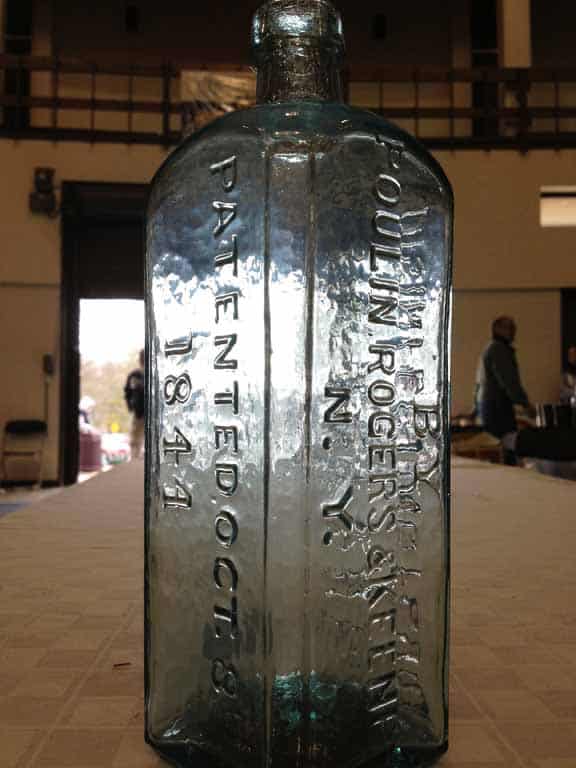 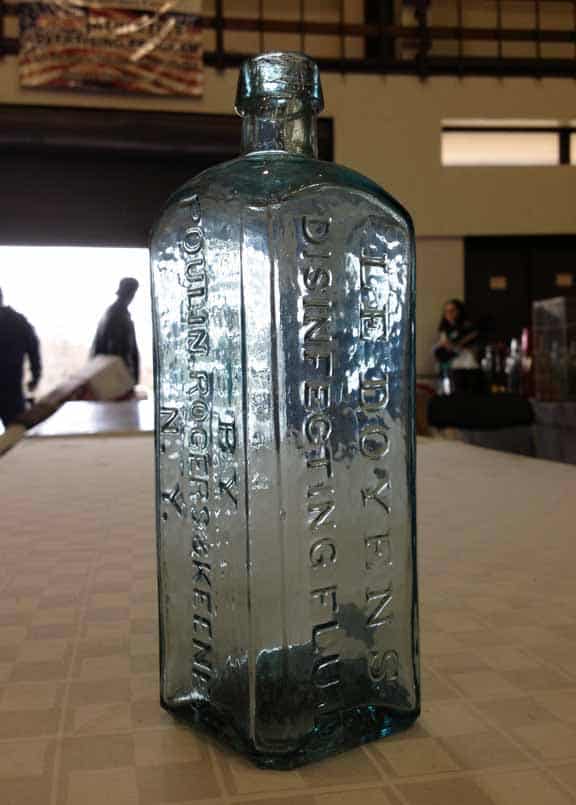 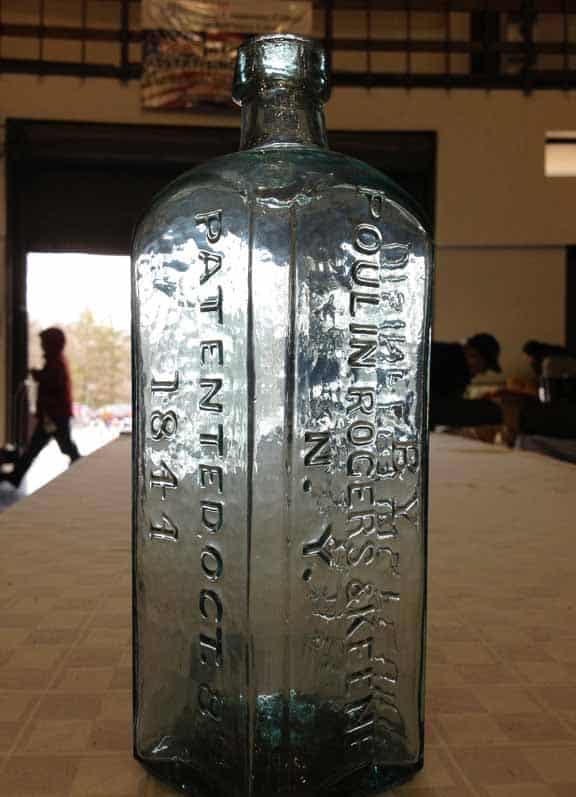 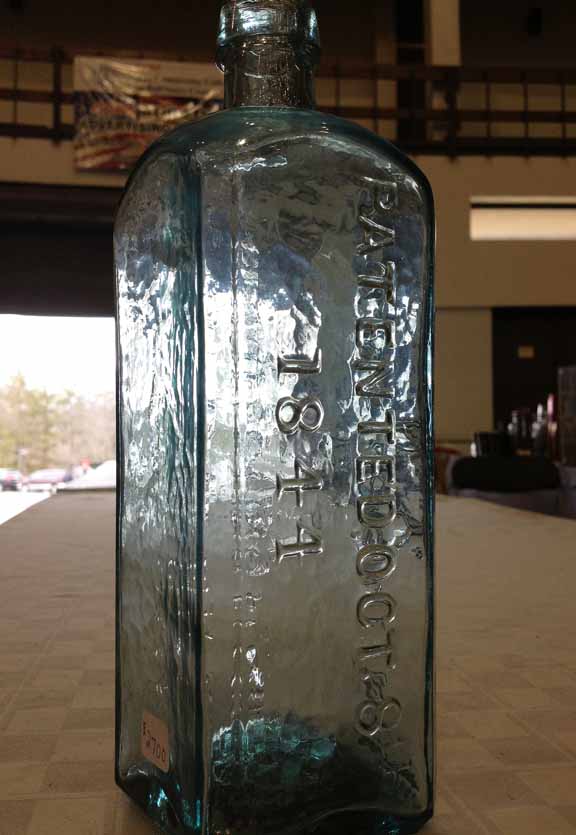 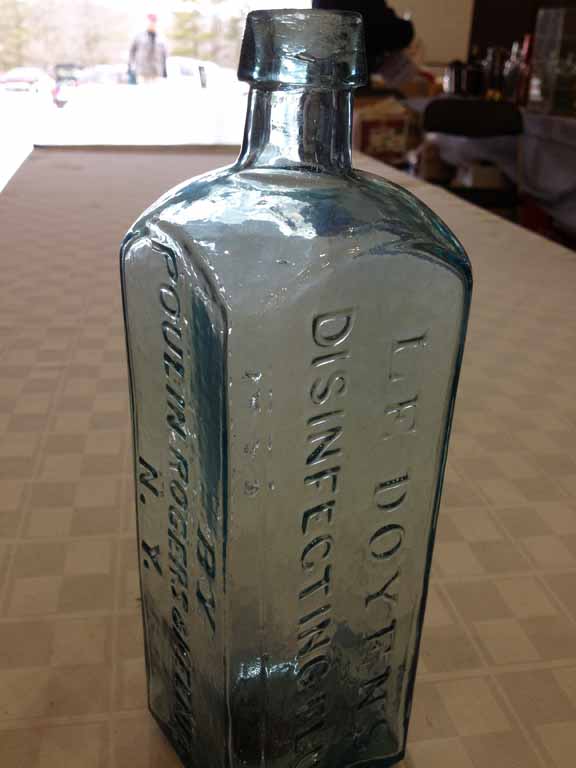 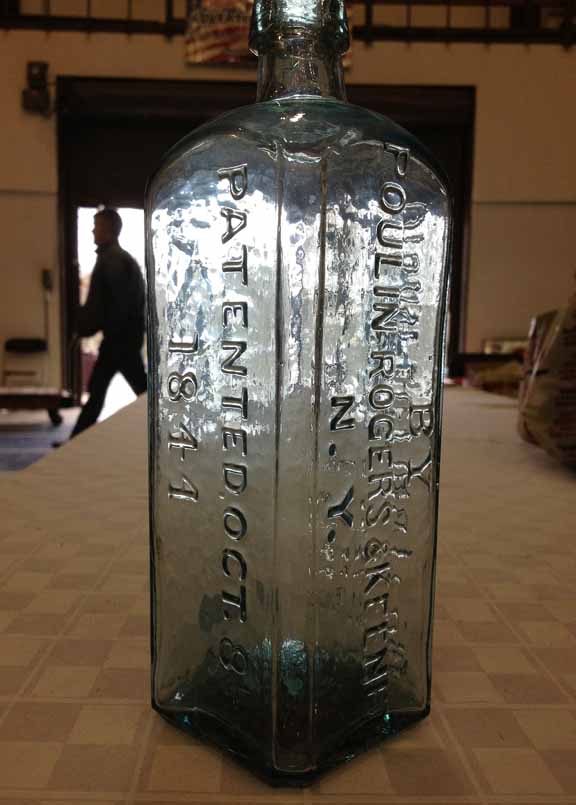 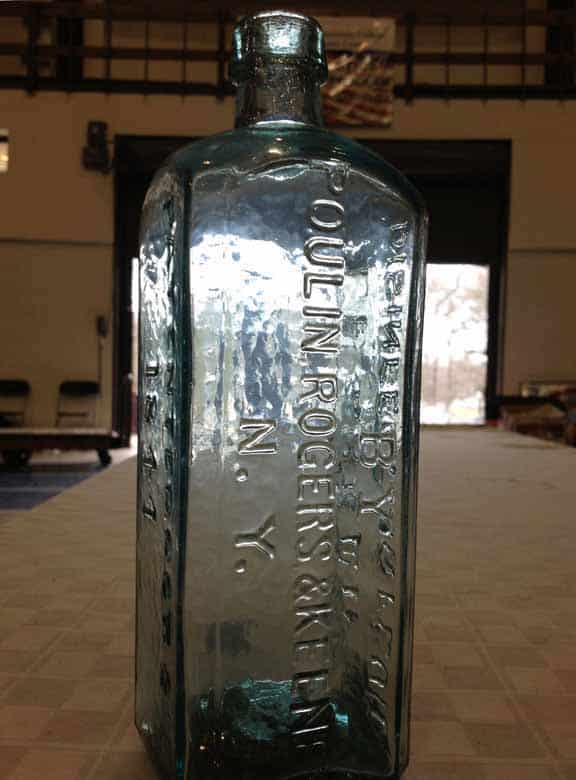 UNIQUE EXAMPLE – ONLY ONE KNOWN IN THIS SHAPE AND COLOR

Large Square with beveled corners “SIMILAR TO A TOWNSENDS” topped with a drippy applied sloping collar lip. Our research shows that there has never been a previous document sale for this rare example – It is un-listed in this color, No chips or cracks or other significant after Mfg damage. This is indeed extremely rare, and we think it is a unique example in this color.

Deviations from perfect: This bottle is somewhat hazy in appearance with overall interior de-vitrification (or contents etching). Striking BLUE COLOR that sparkles in the sun with tons of hammer whittle. It has some normal, and actually expected light ware on base and corners; and has the inner haze previously mentioned, but all that is insignificant because there are no others known! The bottle was cleaned, there is remains some etching and scratches, please use the close-up feature to examine the surface thoroughly. It’s unlikely we will ever find another whole example. Estimate, $3,000.00

History: One like shaped variant was patented and produced by T. Ripley Hawley four years later (1847) in Boston. Also this other like shaped example was in plain AQUA, and that aqua example is thought to also be unique (the only know example in this shape). It recently sold in John Pastors November 5th 2011 Auction. 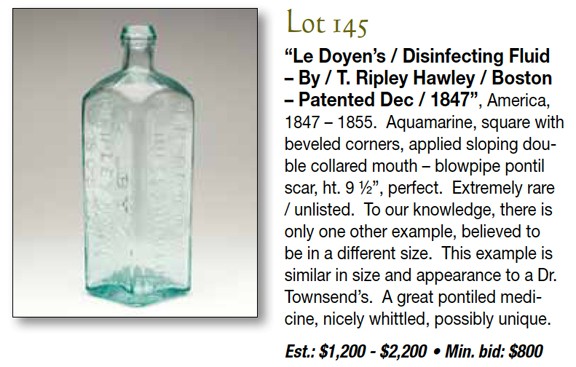 Ferdinand Meyer V is a native of Baltimore, Maryland and has a BFA in Fine Art and Graphic Design from the Kansas City Art Institute and School of Design. Ferdinand is the founding Principal of FMG Design, a nationally recognized design consultation firm. Ferdinand is a passionate collector of American historical glass specializing in bitters bottles, color runs and related classic figural bottles. He is married to Elizabeth Jane Meyer and lives in Houston, Texas with their daughter and three wonderful grandchildren. The Meyers are also very involved in Quarter Horses, antiques and early United States postage stamps. Ferdinand is the past 6-year President of the Federation of Historical Bottle Collectors and is one of the founding members of the FOHBC Virtual Museum.
View all posts by Ferdinand Meyer V →
This entry was posted in Bitters, Bottle Shows, Early American Glass, eBay, Liquor Merchant, Medicines & Cures and tagged Baltimore, Boston, Disinfecting, Fluid, Jack Pelletier, Le Doyen, LeDoyen, New York, Poulin Rogers & Keeney, T. Ripley Hawley. Bookmark the permalink.